An easy day today a ride out to a nearby keller in Reundorf, the Schmausenkeller. The keller is also the tap room for the Brauerei Müller in Reundorf — they closed the one in town because everybody preferred the keller.
Heading south along the cancel we noticed a cruise boat heading for the locks. We haven’t seem much river traffic this trip, probably because being August everybody is on vacation. This one seemed empty of passengers, so I guess it was deadheading back to it’s home base. BTW, the freighter on the left (Kilian) has been their for days. Not sure what is going on there —maybe could pay lock fees? 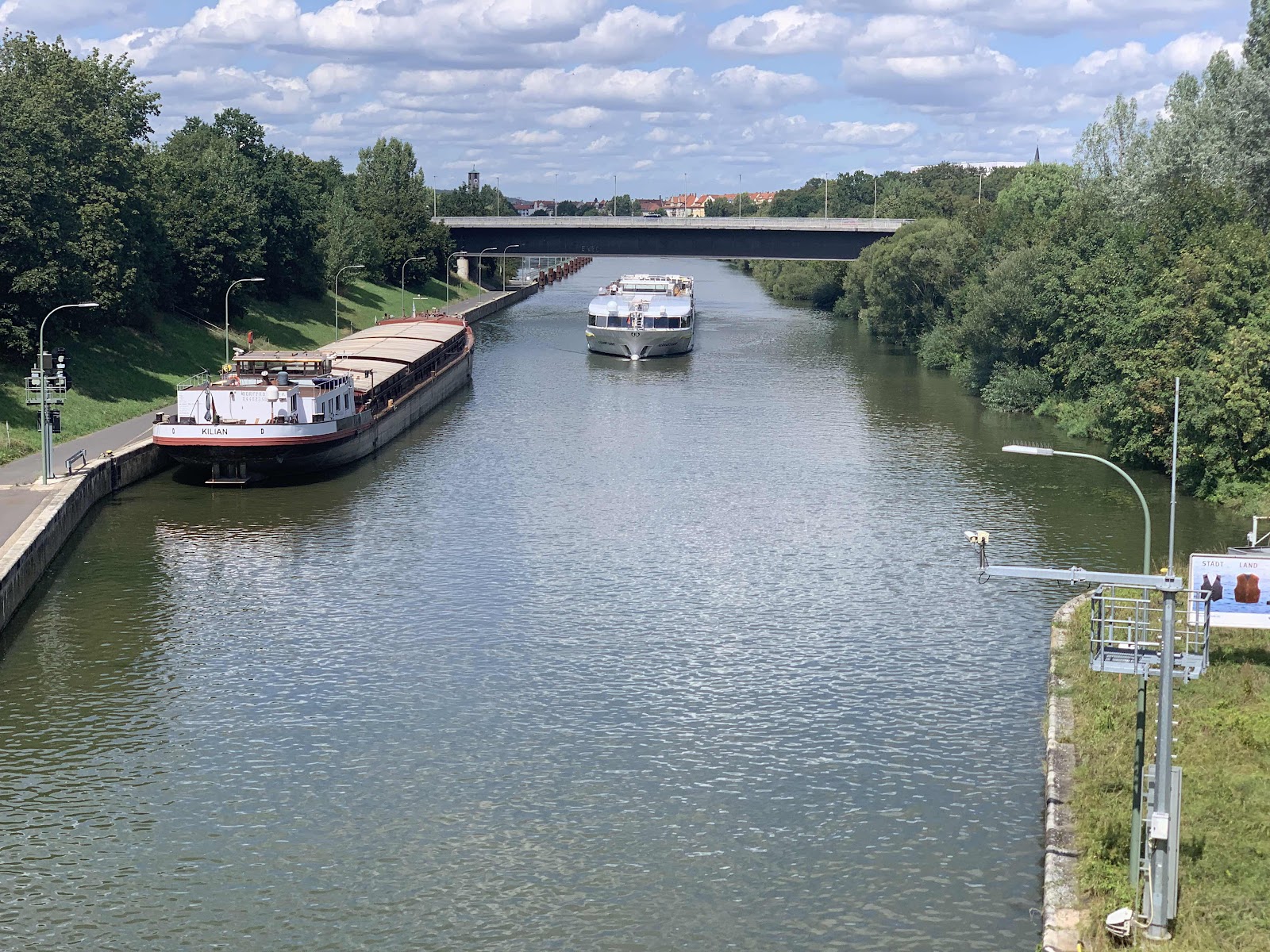 The Schmausenkeller doesn’t open until 4pm so he had some time to kill. Our path took us by Pettstadt so you can figure out what is next.  We stopped in at Schrauder Keller for krug or three of Löwenbräu Buttenheim. 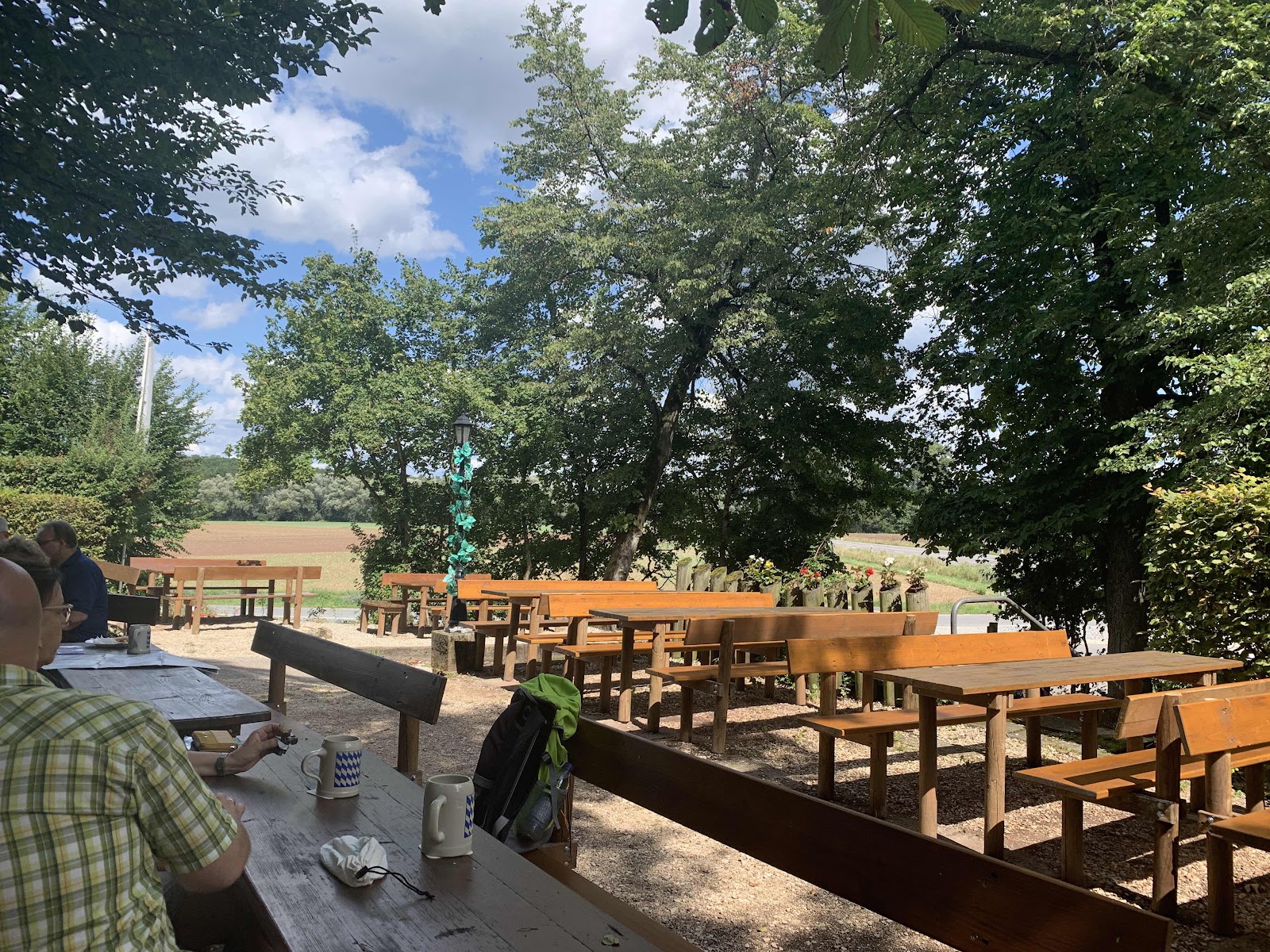 As always, the beer was fresh and cold. 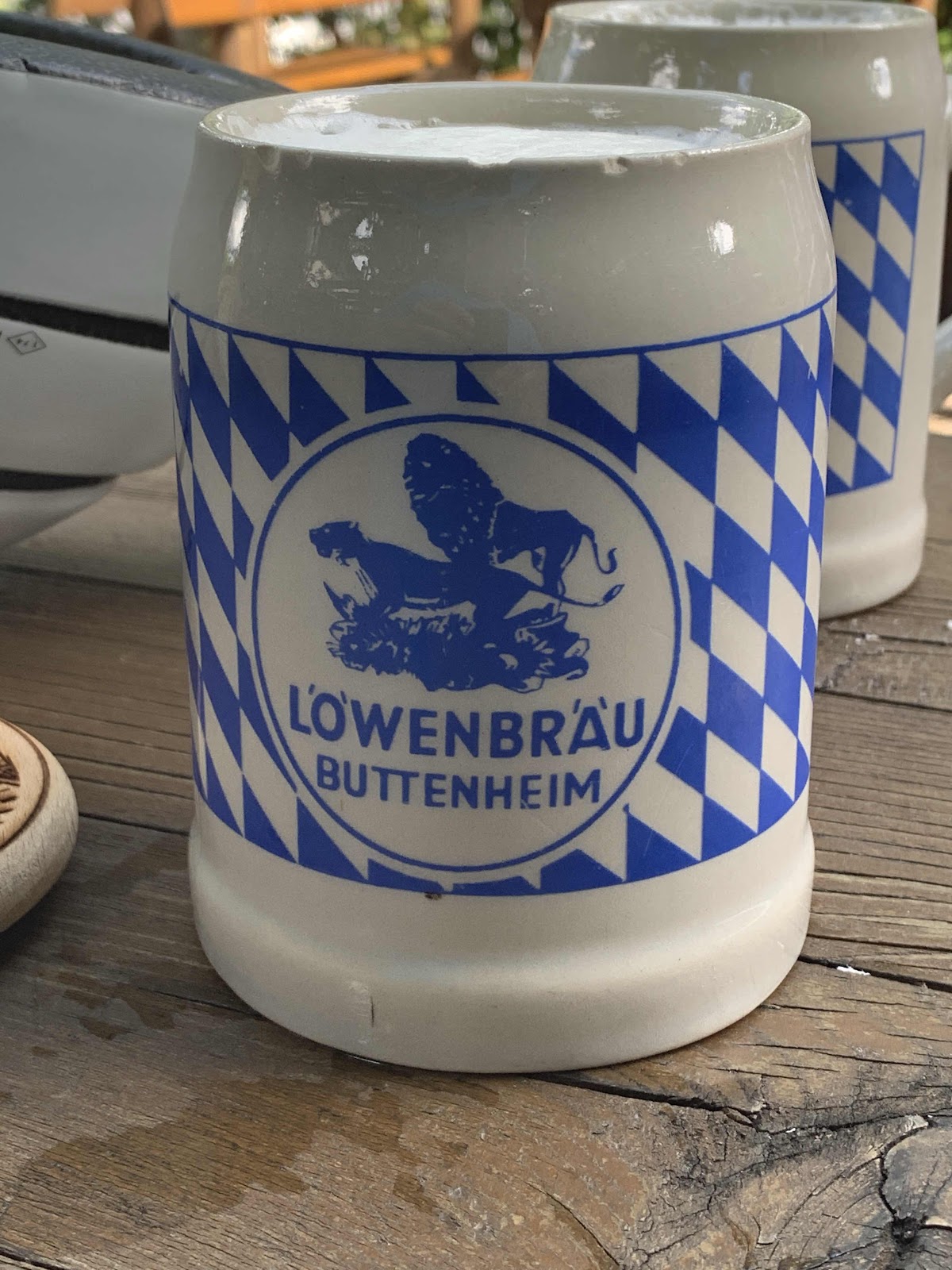 They were setting up for their Monday grill, which is chicken and it was tempting to hang around but we had a set a goal and we were determined to meet it.
On the way we passed a cafe with the following sign, meaning (I take) “Yield to Coffee and Cafe”. — if it had been beer we might have stopped. 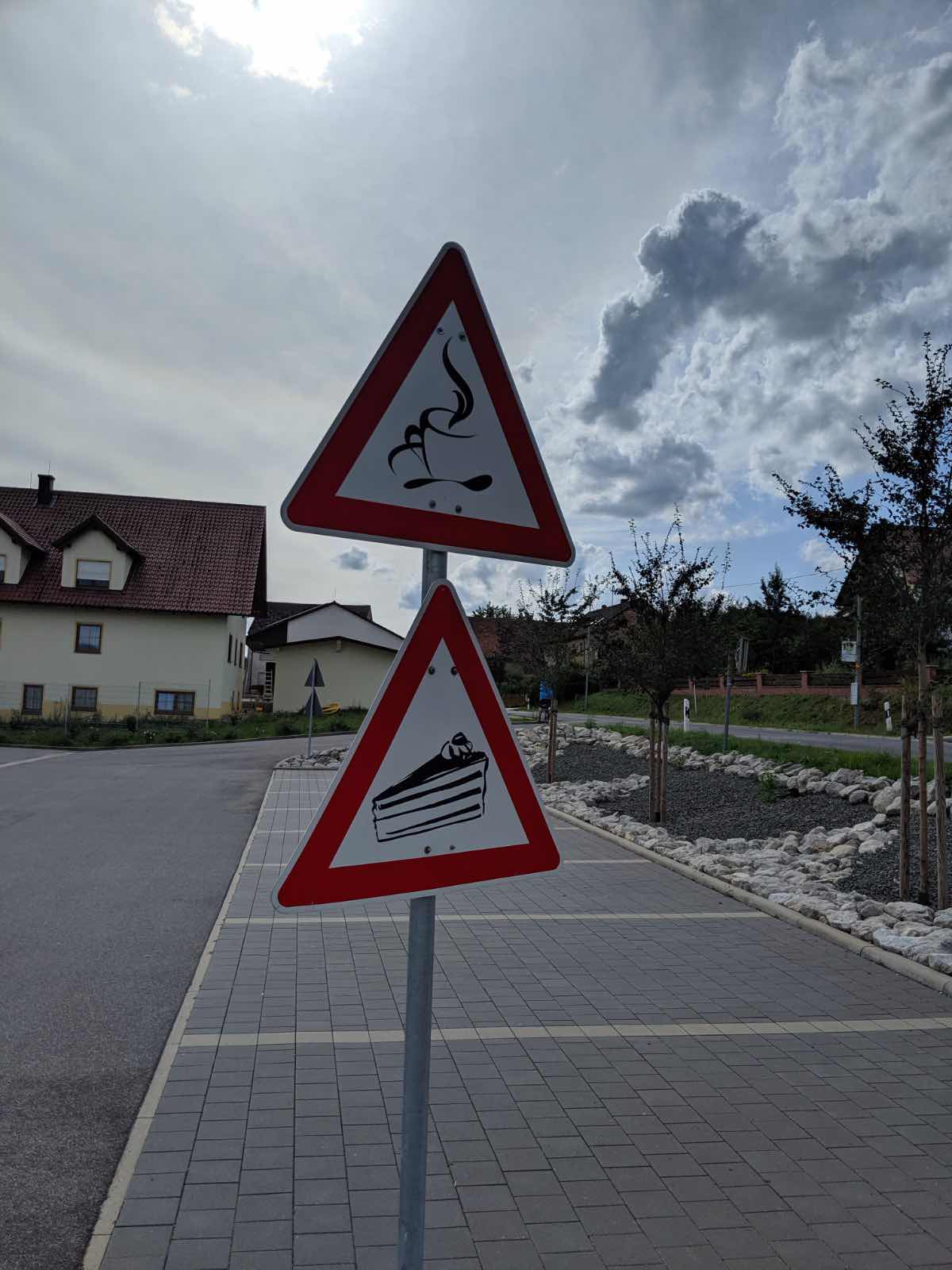 The Schmausenkeller is up on the side of a hill so it has a good view of the valley. They are open year round and in the cooler months the main building acts as a regular Gastsätte. 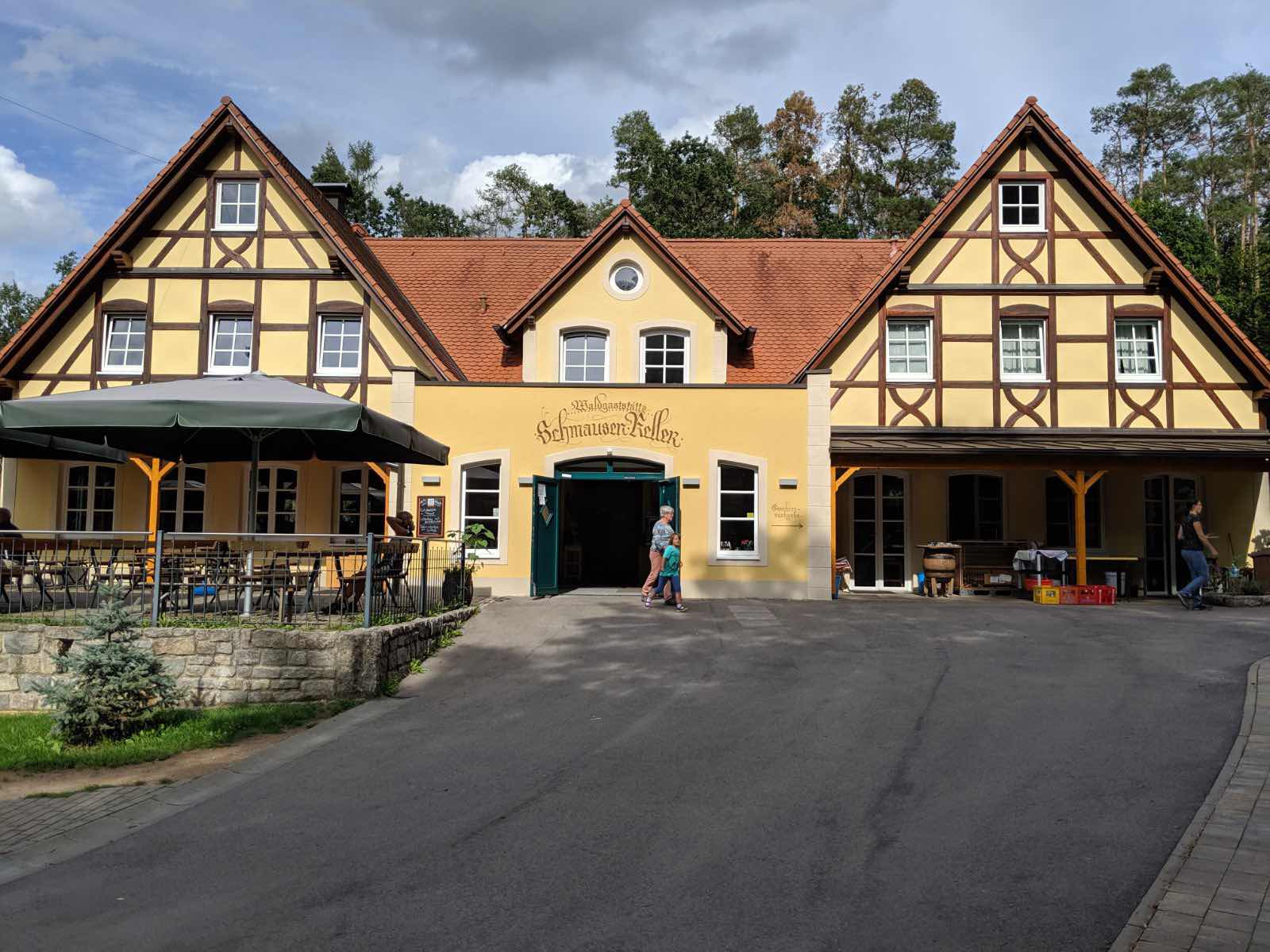 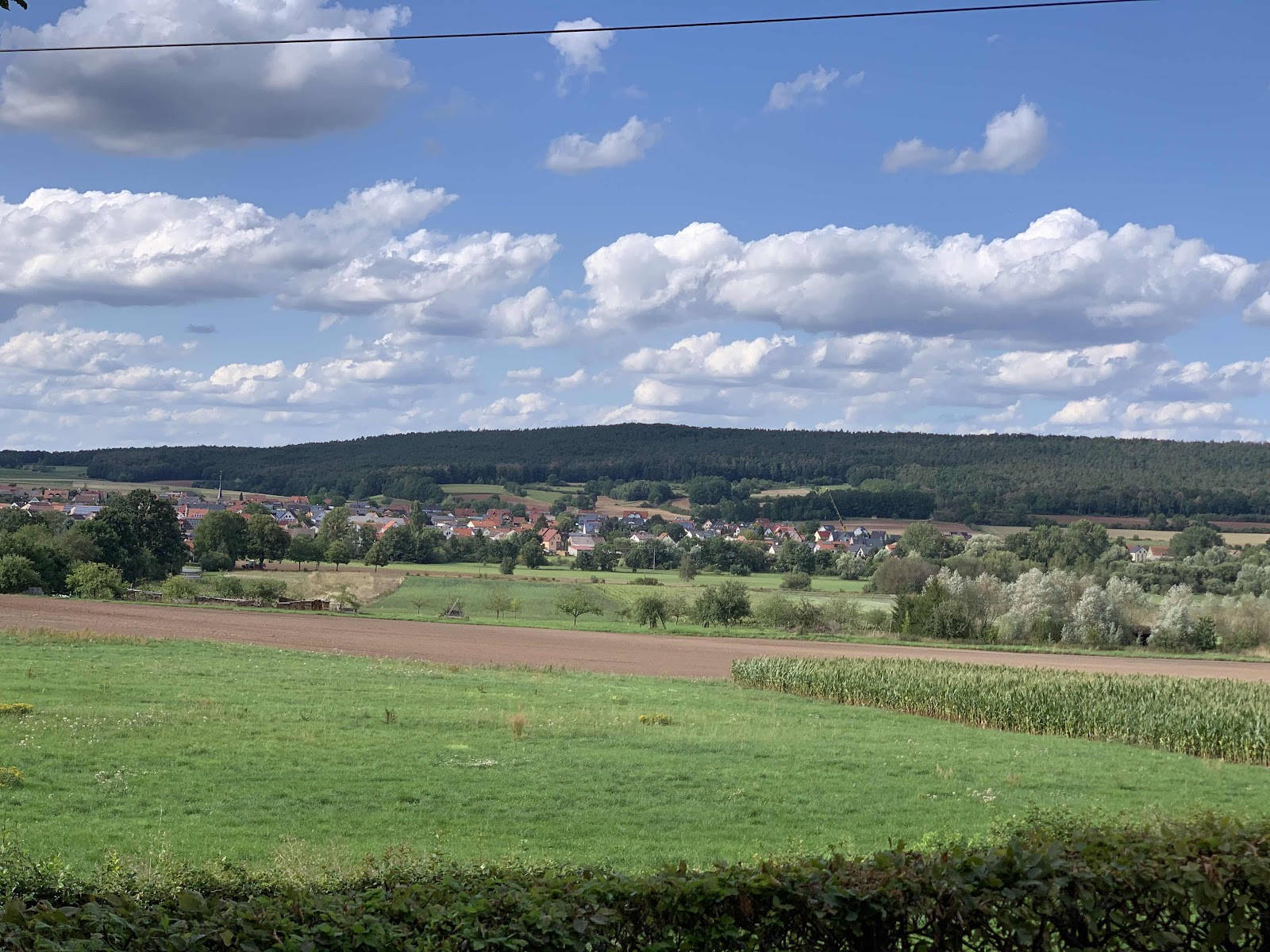 Even some funny looking bicycles... 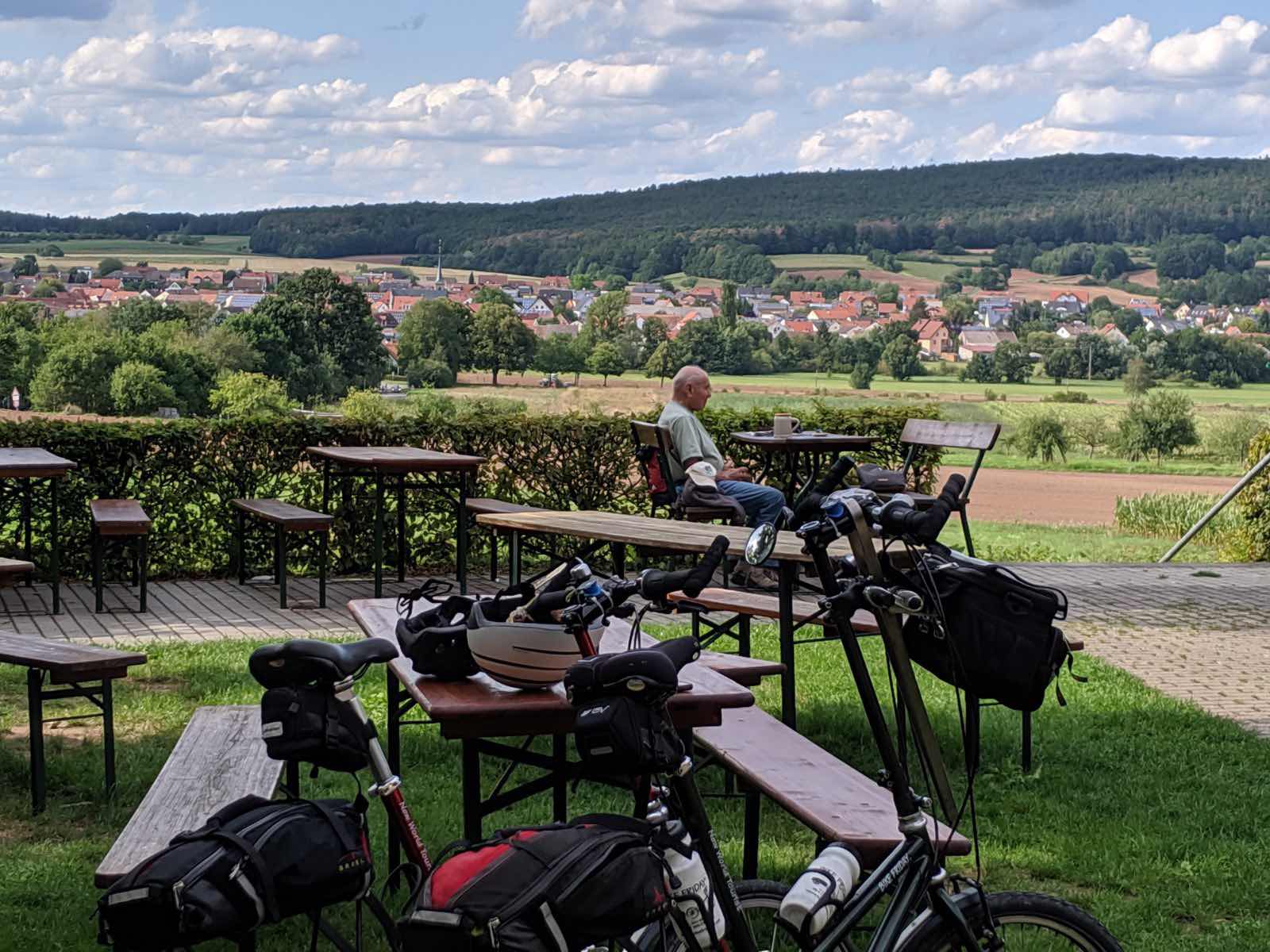 The beer is ordered at a booth that literally is in the side of the hill. The beer is good, though helped a bit by the location. And the price — it is €2 a seidla. 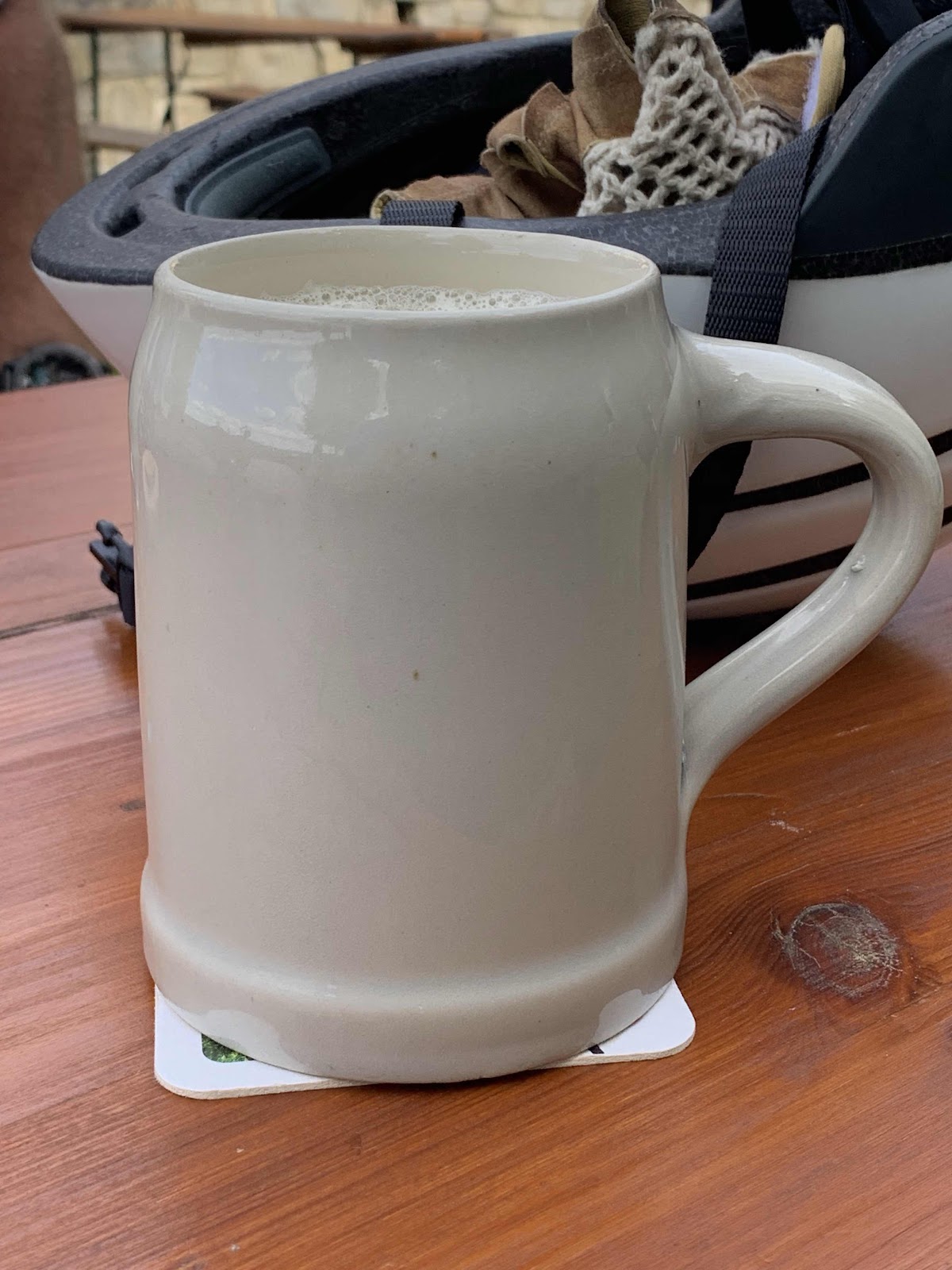 They also have one of these (I forget the German word for them) erected by the 1979 Stammtisch. The shields on the sides all represent various local organizations. 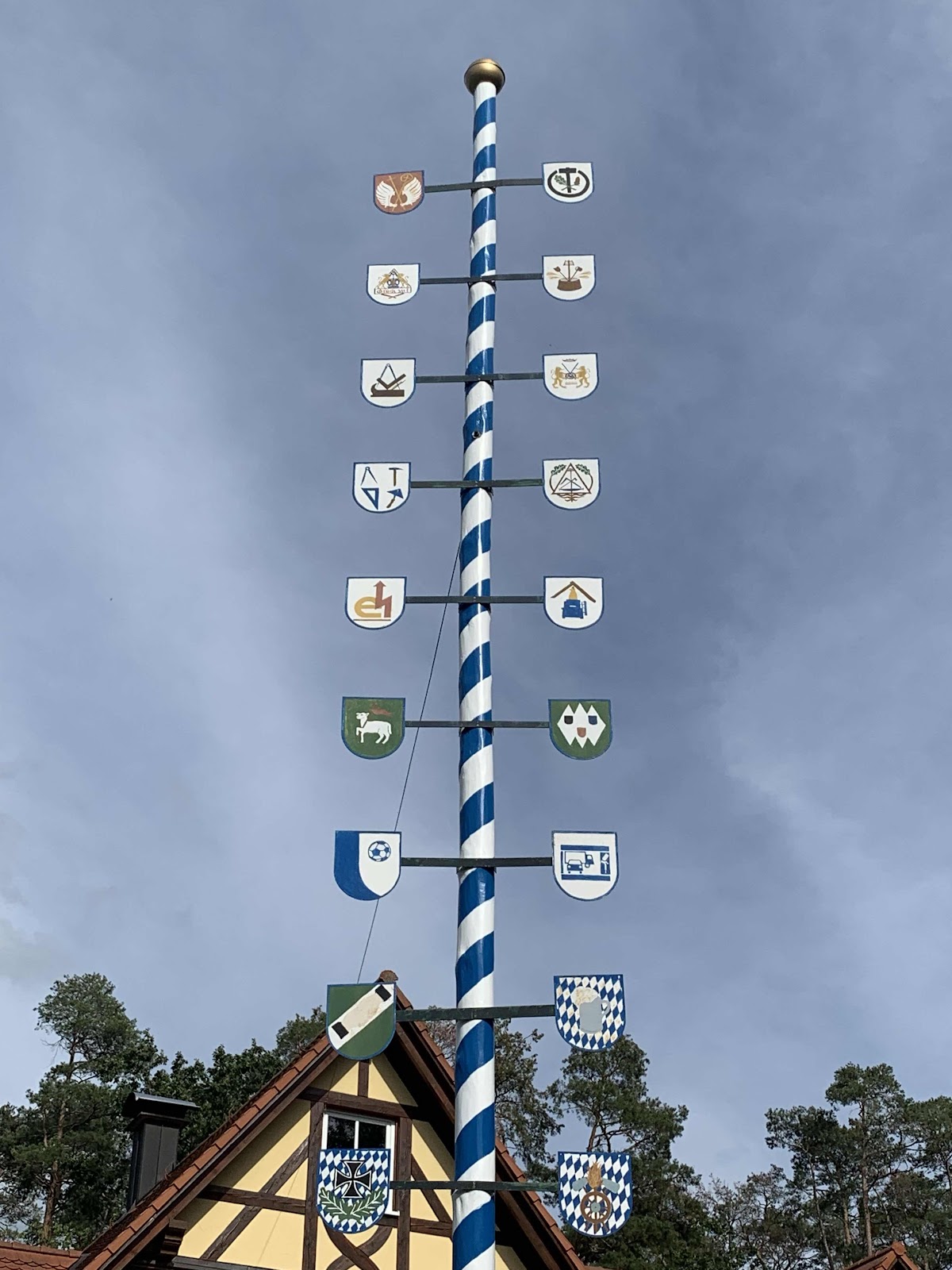 A nice day, €2 beer, sitting outside with a great view, it was tough to leave. But Bamberg was getting any closer sitting there so finally we headed back.  As well passed by Schrauder Keller in Pettstadt we made sure not to inhale as to get distracted by the roasting chickens. It would be the chickens that were the problem, with was the 2-3 beers that would accompany them.
Our way back took us near Wunderburg so we decided to get a bite to eat at Keesmann. 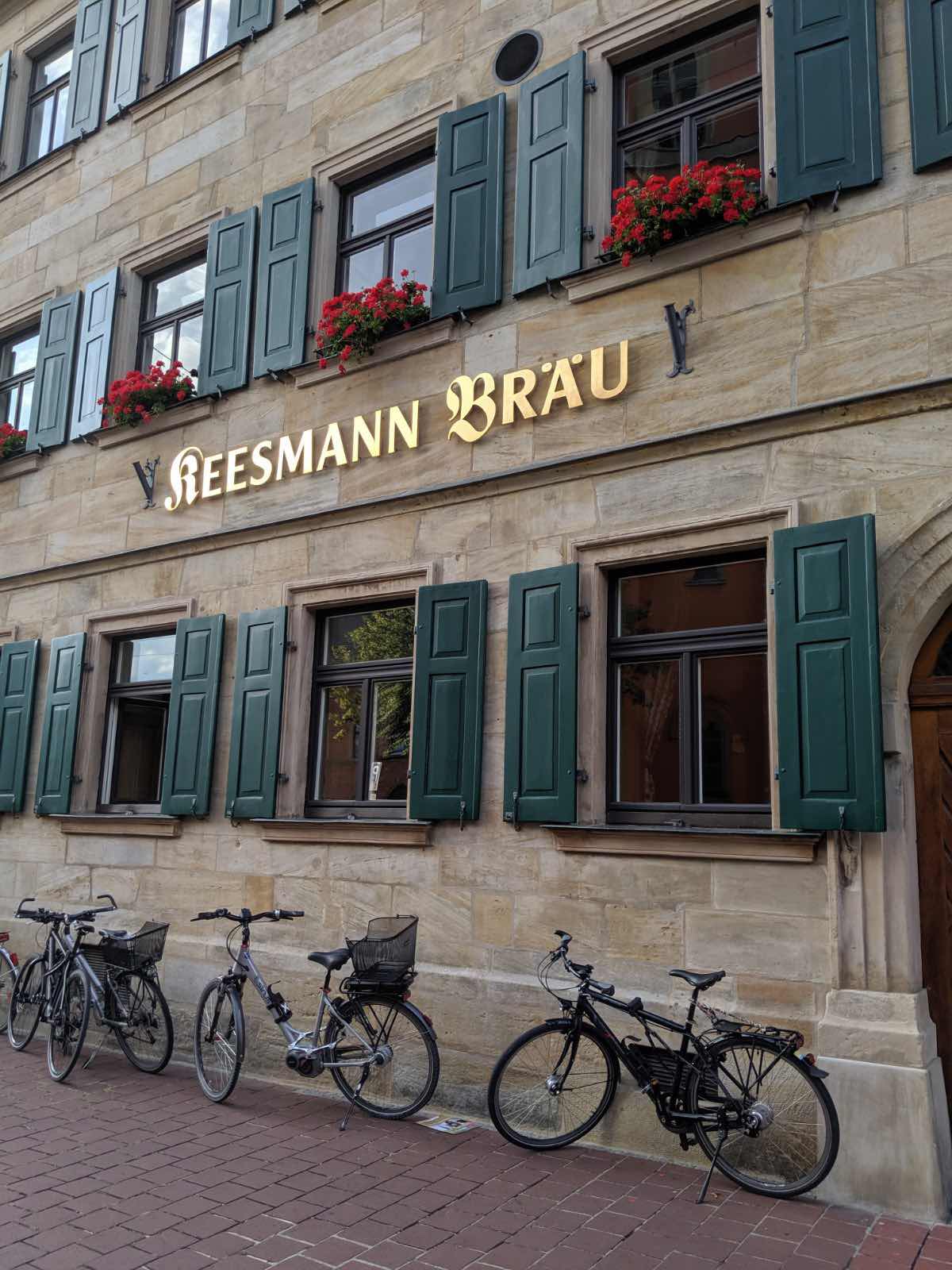 The inside rooms were all closed off and only the courtyard patio was available. No problem. We had a Sternla Lager and a Herren Pils. Both were excellent but the Pils even more so. 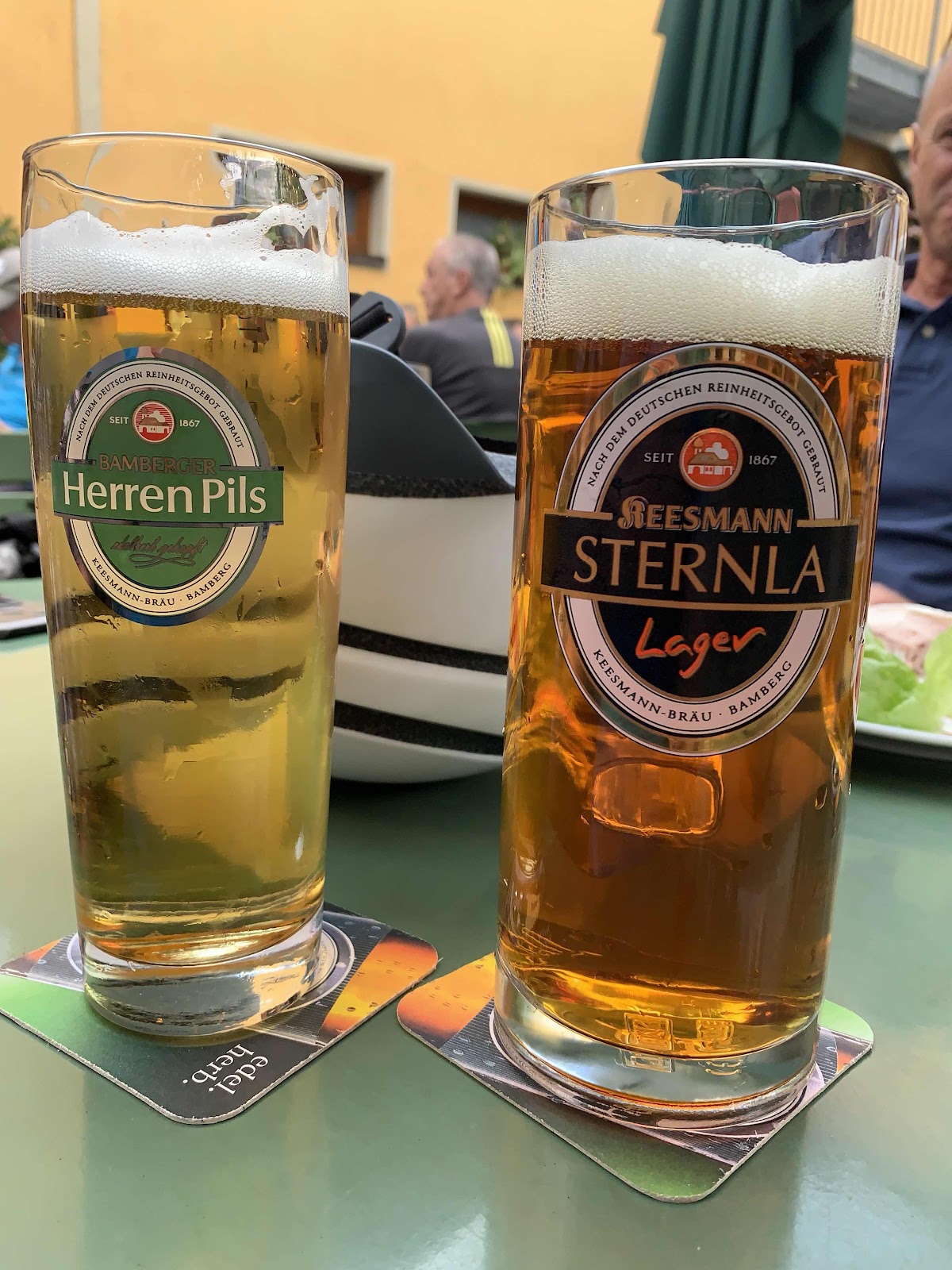 It is Pfifferlinge (Chanterelles) season so we had a Schnitzel Cordon Bleu (stuffed with ham and cheese) covered with a Pfifferlinge cream sauce. It was wonderful. And the fries were also very good, very crisp. 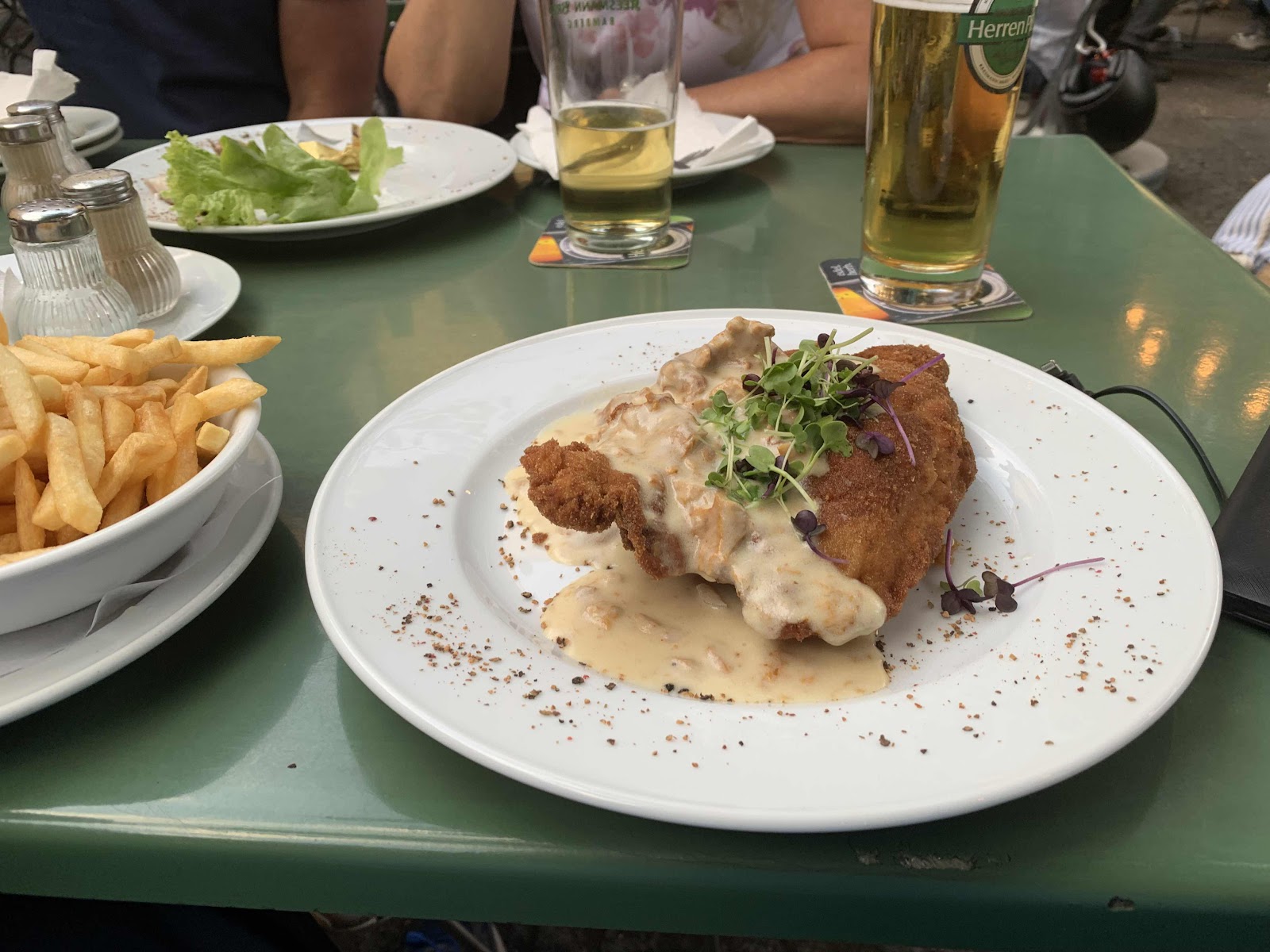 Hi Fred. I've been enjoying your beery travels, by bike, around Franconia; a region which is one of my favourite parts of Germany.

I visited Schmausen Keller back in 2015, in the company of Nick B from Erlangen, who very kindly chauffeured me around. We visited several other excellent establishments, including the brew-pub at Aisch, where we had lunch.

There was also another small Keller which we called in at, on the way to Schmausen. Unfortunately my phone decided to lock up, so I have no details of its name. It could possibly have been Schrauder Keller, mentioned in your post, but it seemed smaller than that. All I can remember is, it was set into the side of a hill, and was fairly close to a disused railway line.

My son and I spent a few days in Bamberg, last year. It was my sixth time in the city, and after reading your reports, I'm craving a return visit!