It was going to be a hot day, nearly 90ºF (30º+ C) so we decided not to be too adventurous. Actually, I decided. The hot humid weather reminds Bob of Florida so he was happy with it. Me, the humidity was killing me.
We decided to ride up the Aurach valley. The first stop was Brauerei Müller in Debring. 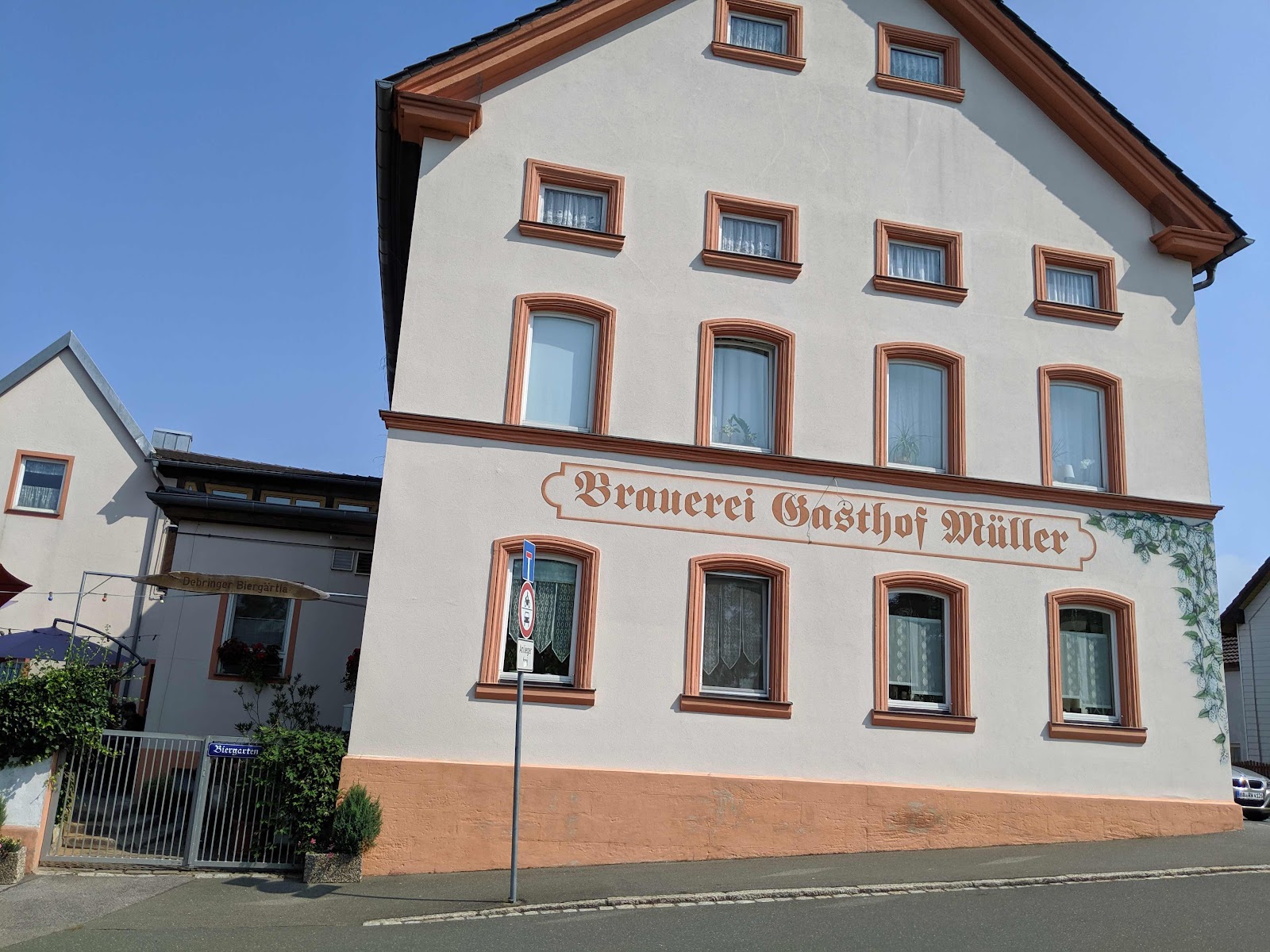 They had three beers on tap, a Pils, and unfiltered Lager and a Dunkel. We went with the Pils and Lager (hard to tell with the Krug). Both were good but nothing outstanding. 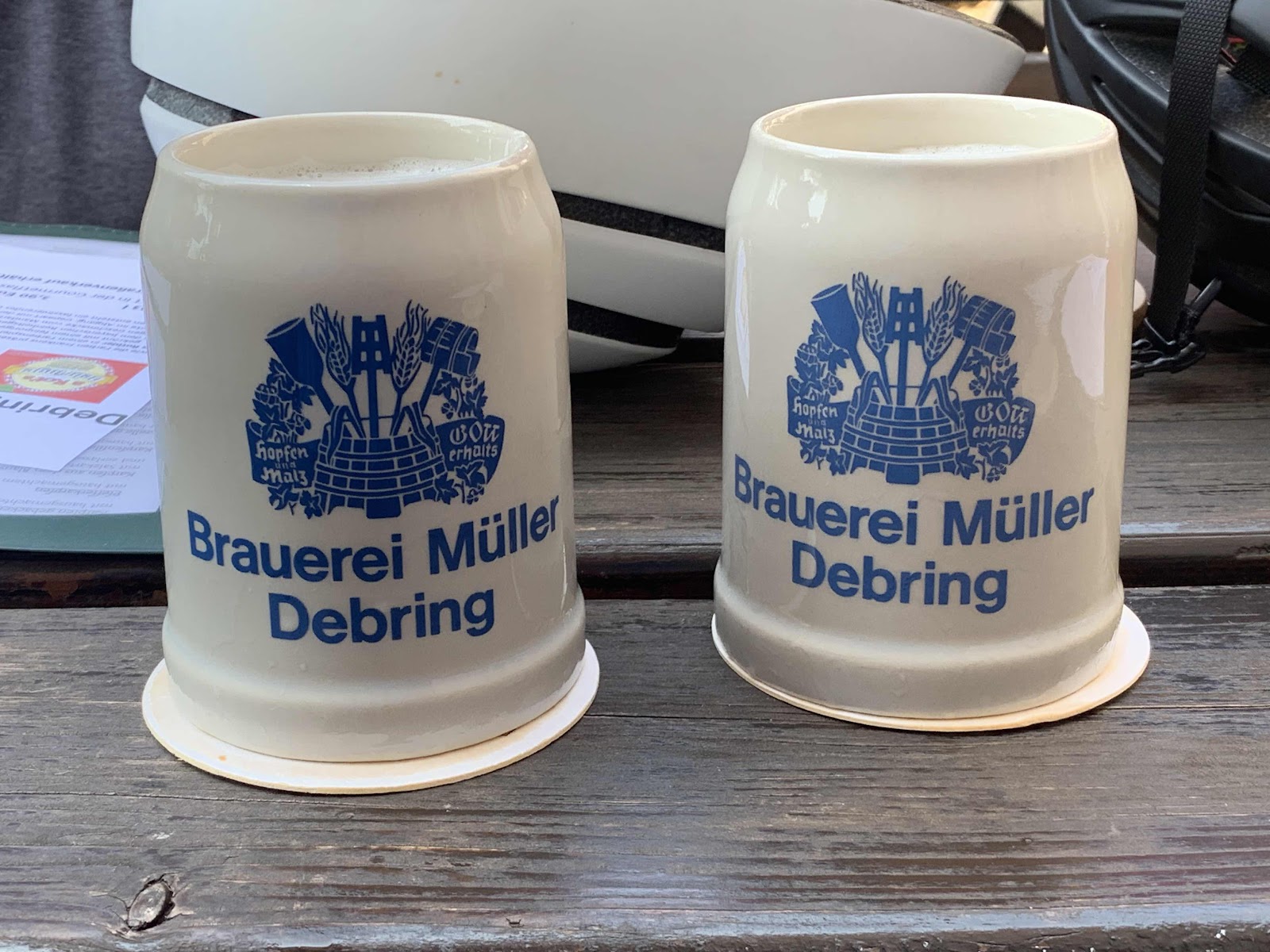 They had a lot of fish on their menu and it was tempting but seemed too big a meal for lunch with a lot of riding ahead. So we went with the standard Bratwurst and Kartoffelsalat.  Hit the spot. 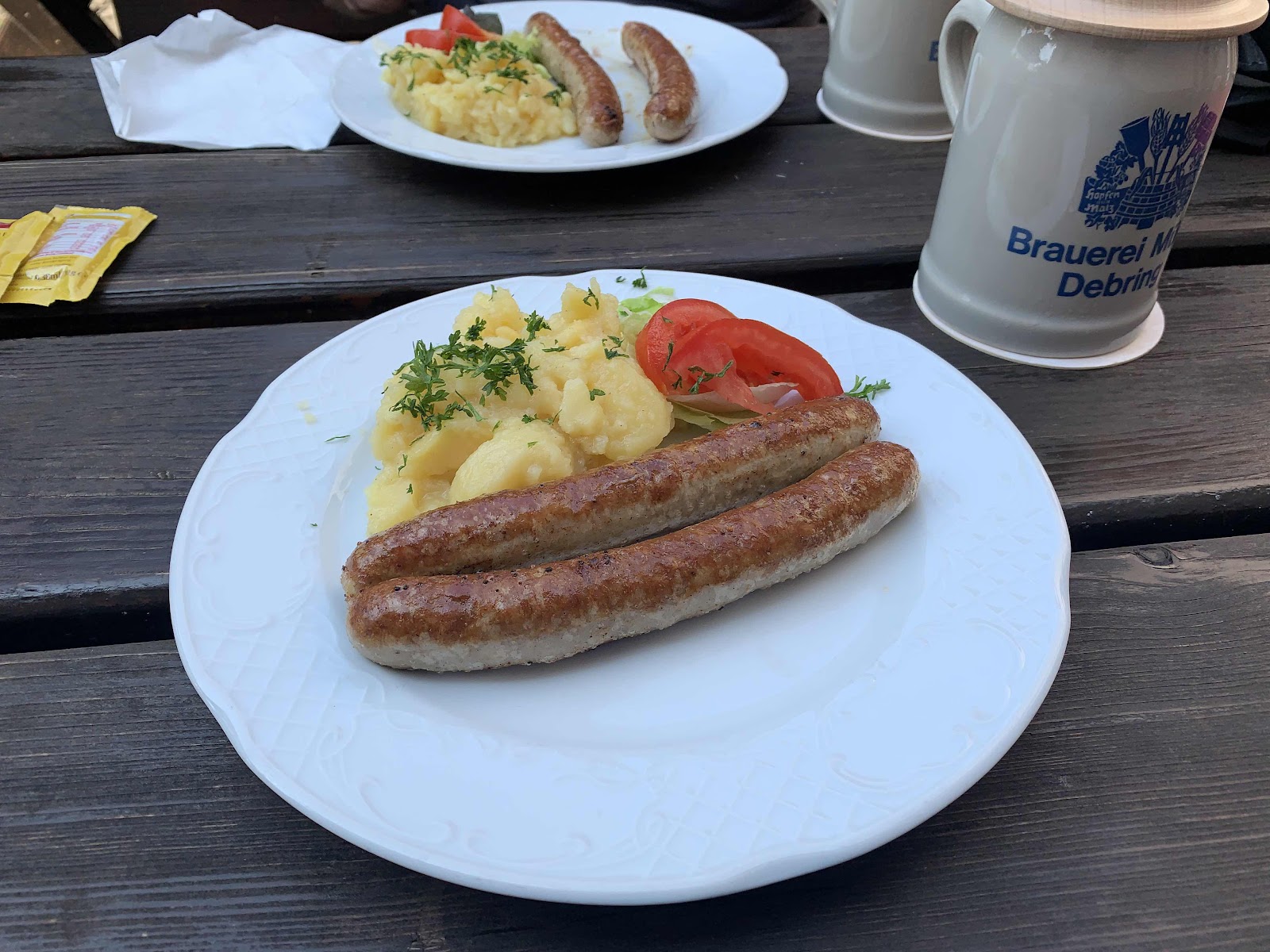 We headed west-ish, along the valley. Some very pretty scenery, including a nice shot of the Altenburg tower in the distance. 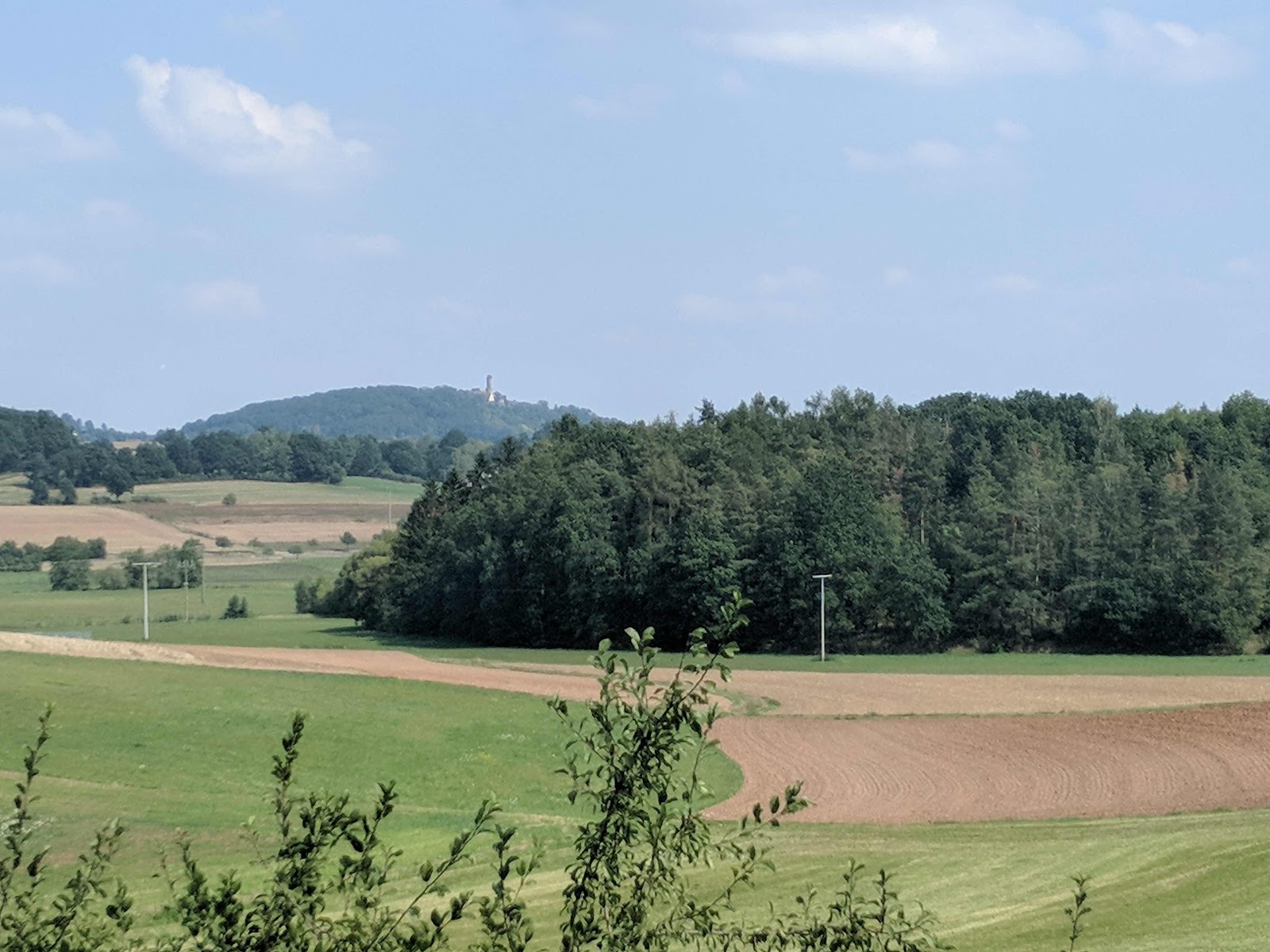 We had a choice of two routes from Google Maps. One (which I had ridden before) takes you thru Stegaurach and has stretches along the main road. The other alternative presented was about 1km longer but looked to be bike paths and back roads. Both were labeled “mostly flat” so we took what we thought was quieter route and found out Google lied. It was not “mostly flat” — it was on average flat — meaning you went up a big hill then down a big hill — a couple of times — but your starting and ending elevations were the same. So it was flat, right?
Soon we were at Mühlendorf and Brauerei “Alte Mühle”, a/k/a Mühlenbräu. 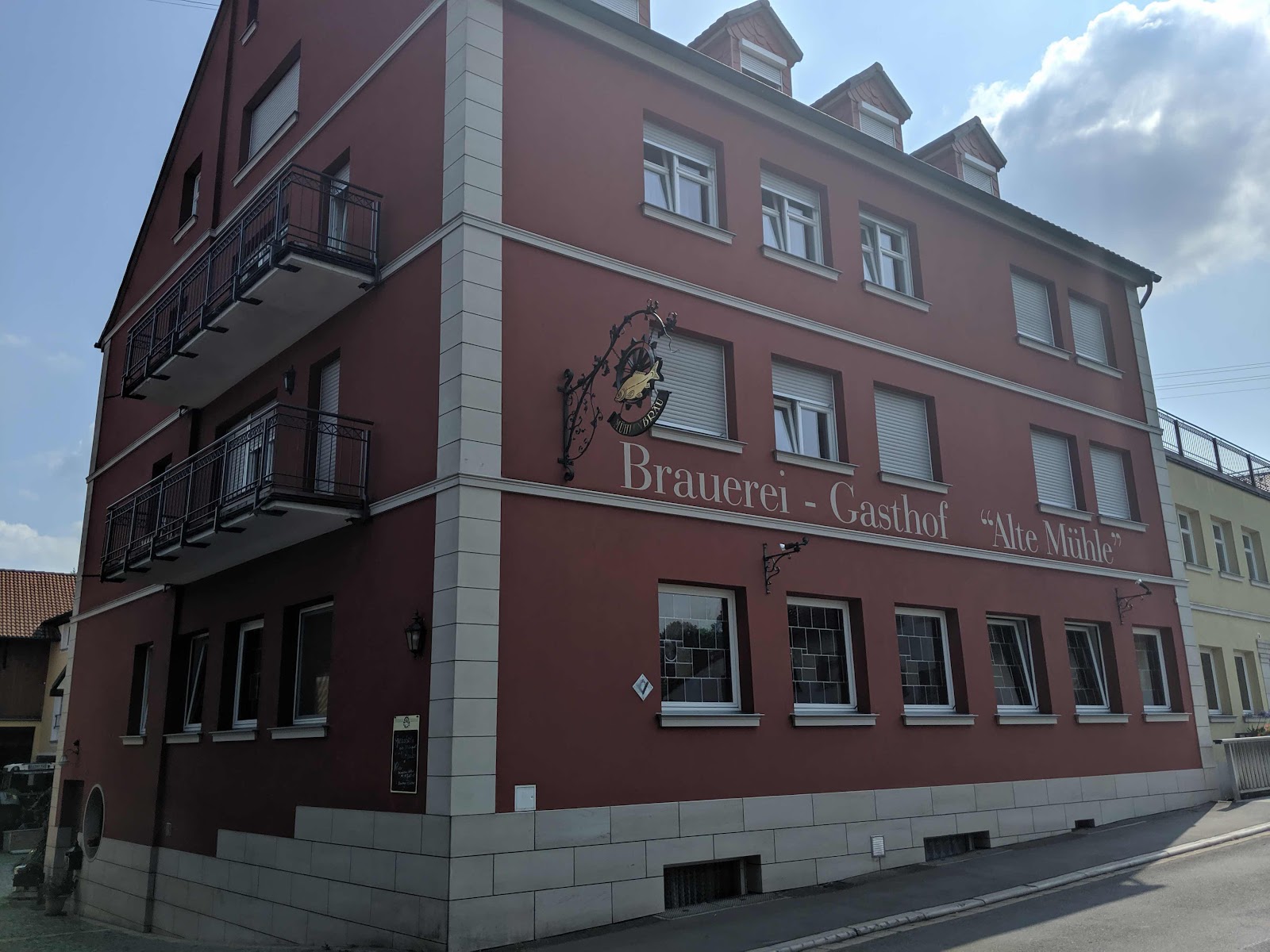 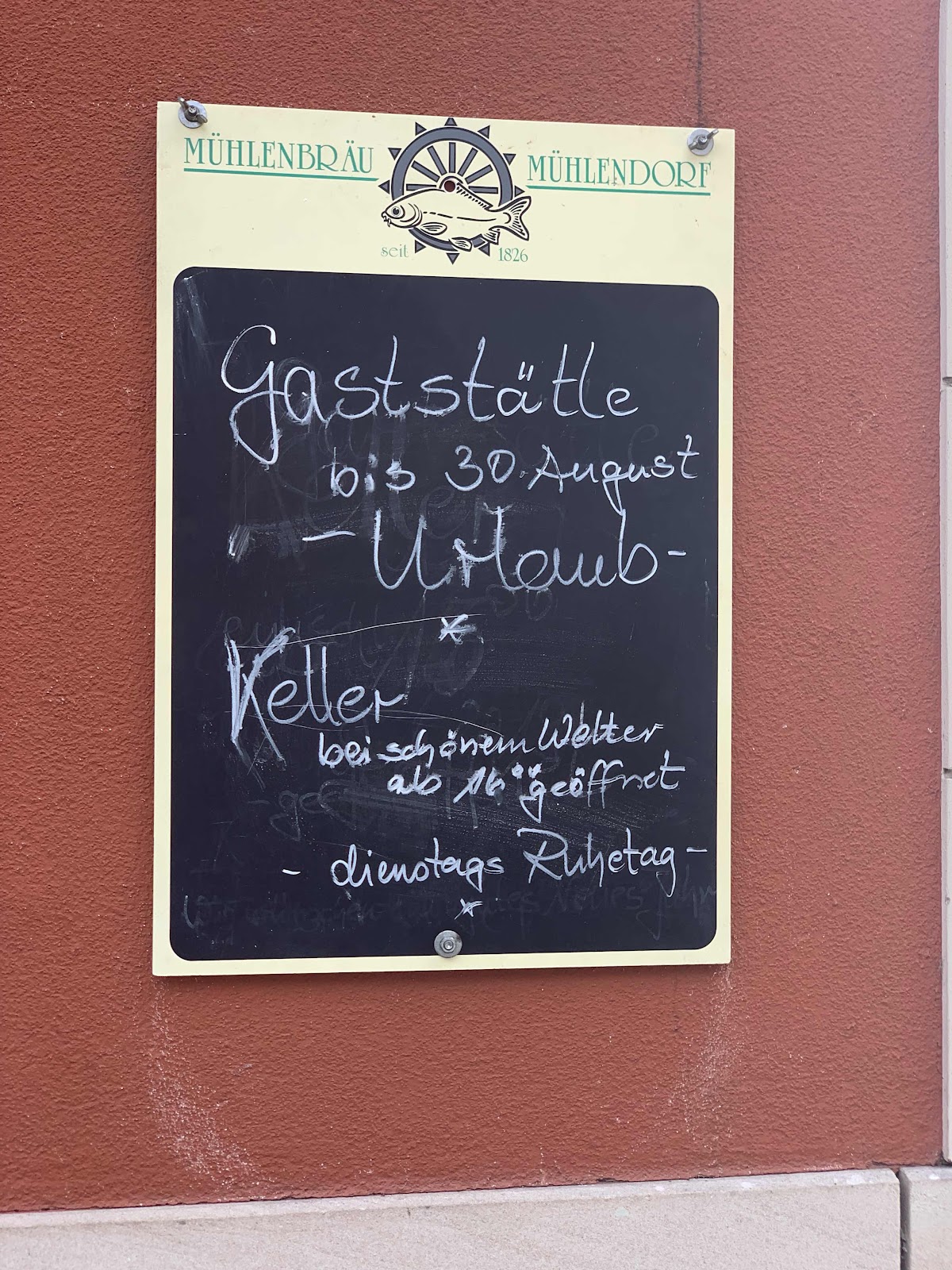 It was about 2pm and the keller wouldn’t open for another two hours. And we didn’t want to wait around. We continued into the courtyard, hoping for a shade place to sit and drink some water and it turned out they were brewing. The brewer came out, said “hi” and asked it we wanted to buy a couple of beers. Um, yes. He came back with two ice cold bottles that cost €1 each. The best deal of the day. 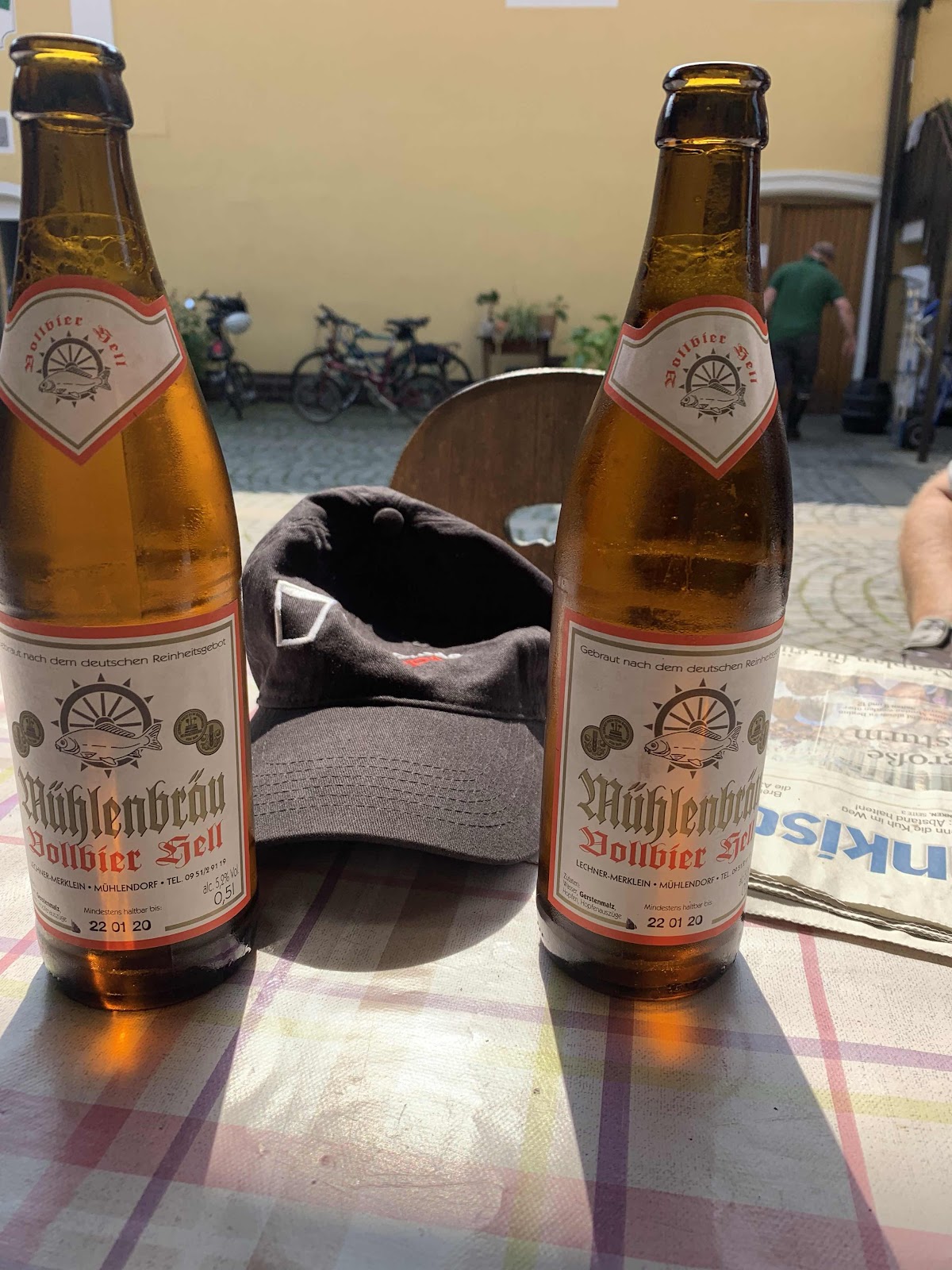 We had some options if we continued on but the heat and humidity was getting to me so we decided to head back towards Bamberg. On the way back we passed close to Pettstadt so you know what that means. 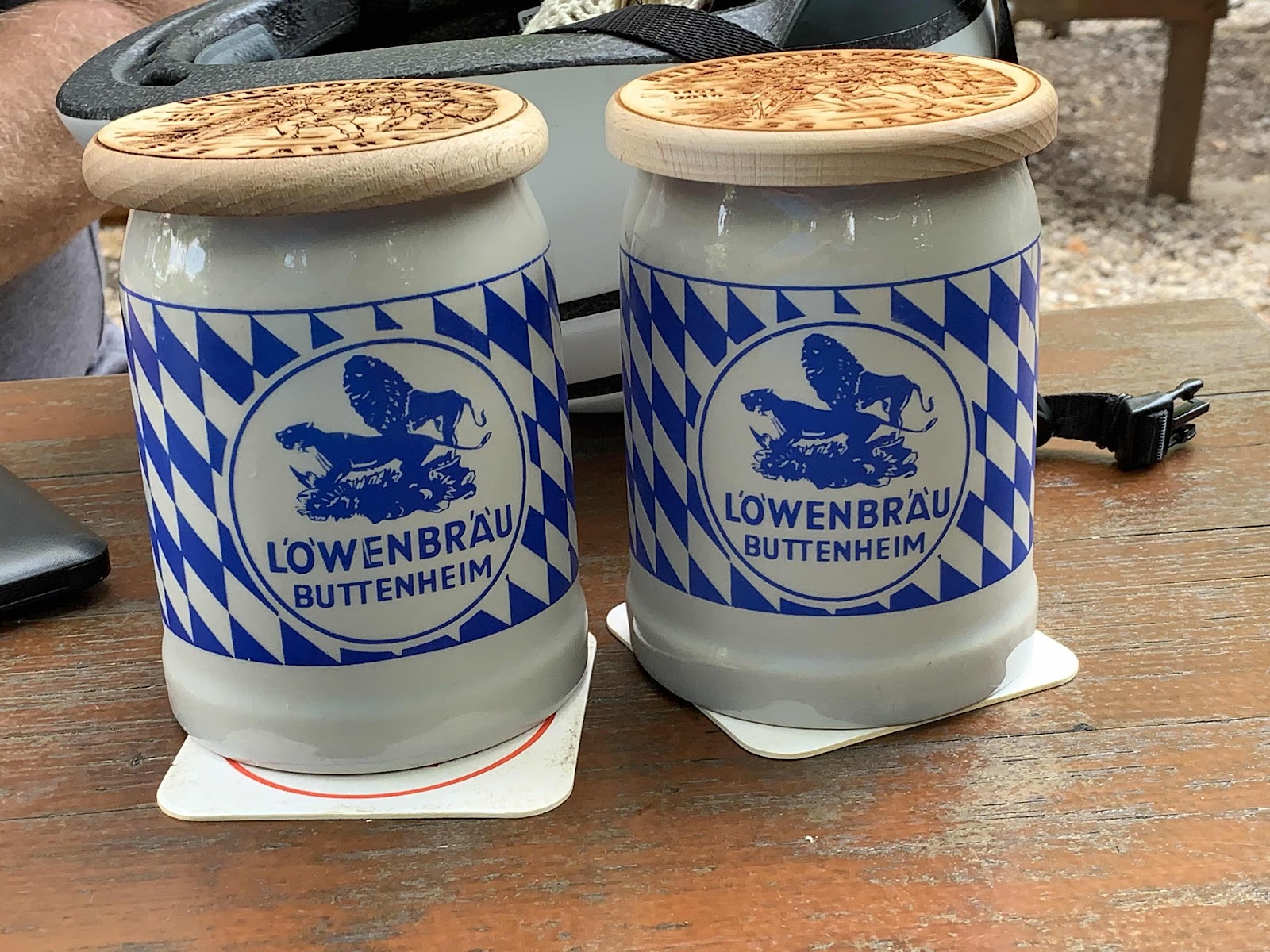 Yep, Schrauder Keller and Löwenbräu Buttenheim. We had some Zwiebeleskäs to go with our beers and all was right with the world. 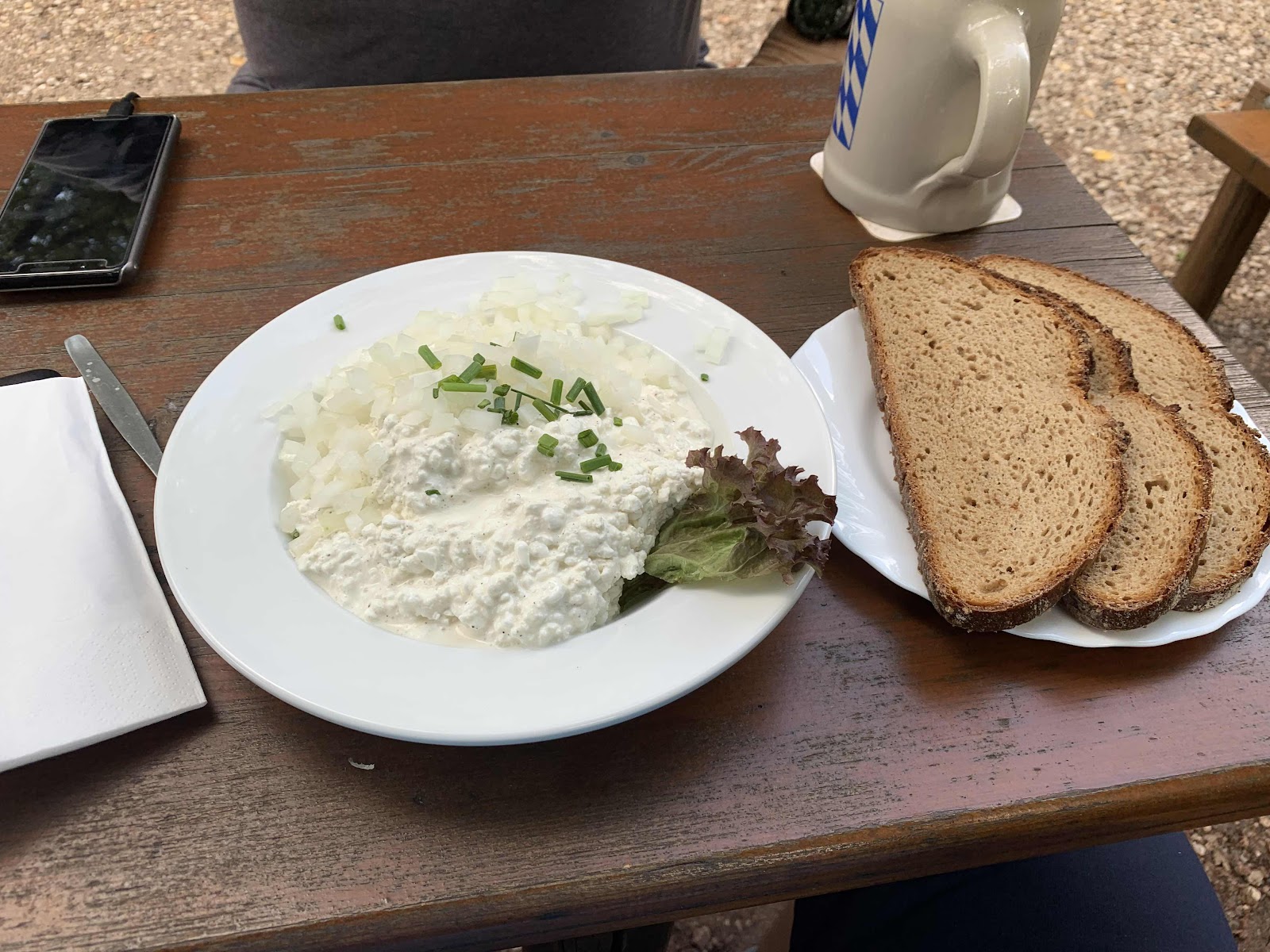 There were additional Krug’s of beer, but they all looked like the one above.
Back in Bamberg we ended up trying out the Kleehof restaurant in the nearby Hotel Europa. The draft beer was St. Georgen of Buttenheim, Löwenbräu’s larger (and less interesting) neighbor. 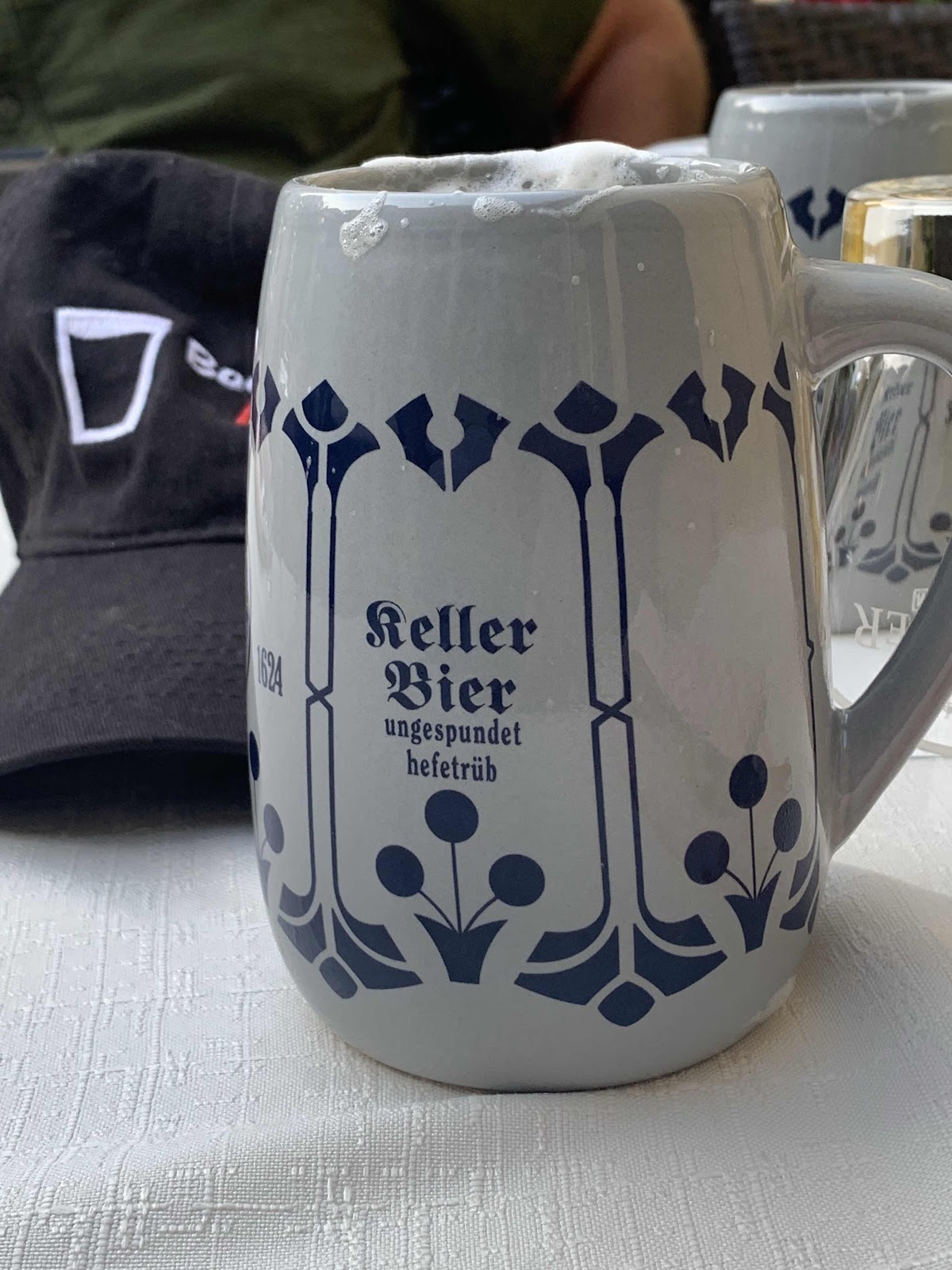 Not only is the beer a bit boring, it is served in a .4L krug. I guess they are doing you a favor but it is still irritating to pay more for less.  Anyway the food was very good but the service was very, very slow. They mostly are a wine restaurant and I guess the slow service gives them time to sell more wine while you gaze into each other’s eyes — but that doesn’t work with my brother and I.
Posted by The Mad Brewer at 1:27 AM