We got off to a late start as our bikes were a bit tired from the day before.
We headed up the Regnitz to where it joins the Main, The first stop was Brauerei Mainlust in Viereth. I’ve found there beers to be a bit variable over the years. Always drinkable but often a bit boring. Today’s was no exception — not much there, there. 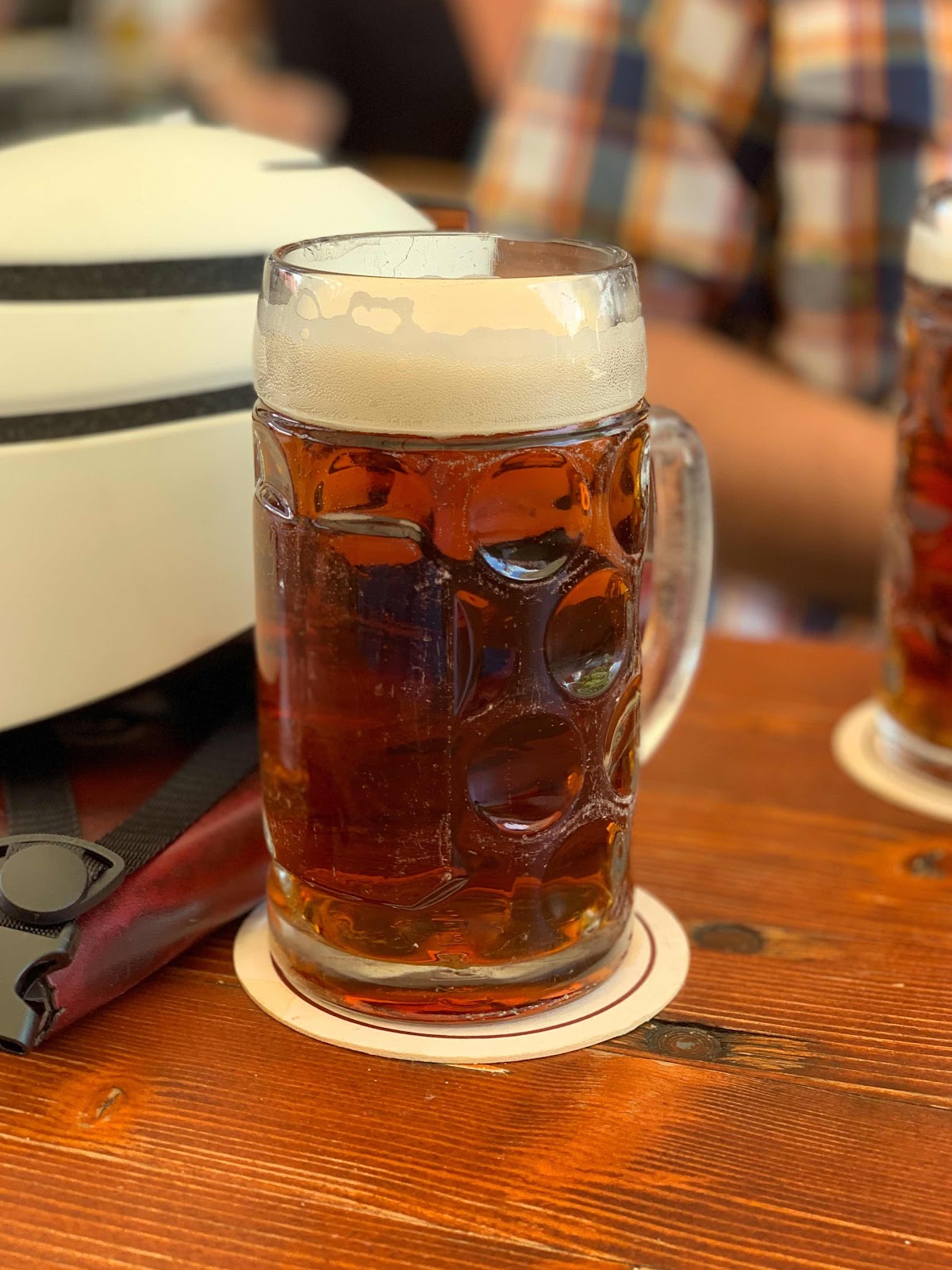 But we had a bit of lunch. They have a nice covered patio and the food has always been good.
Suitable fortified, we headed off to our next stop, Brauerei Wagner in Oberhaid. Over the years the beers here have ranged from bad to dump. One time I waited for the phone to ring and the bartender went it the back room and I dumped 2/3 of the beer in the sink. When she came back I did a “oh look at the time” thing, drank the last swallow and left. Another time I sat on their patio trying my best to finish the beer when a man sat down and we started talking — me practicing my German and he is English. It was quite enjoyable —until he bought me a beer.
But I had heard the beers were better now, that there was a new brewer. We ordered one each of the Pils and Lager and they were actually not bad. The bartender (a different one) wanted to talk (her father was a retired American soldier) and I said something like I hear you have a new brewer. And she said “No, the new brewery is still being built, we brew these beers with our ingredients and recipe at another brewer.”  Mystery solved. 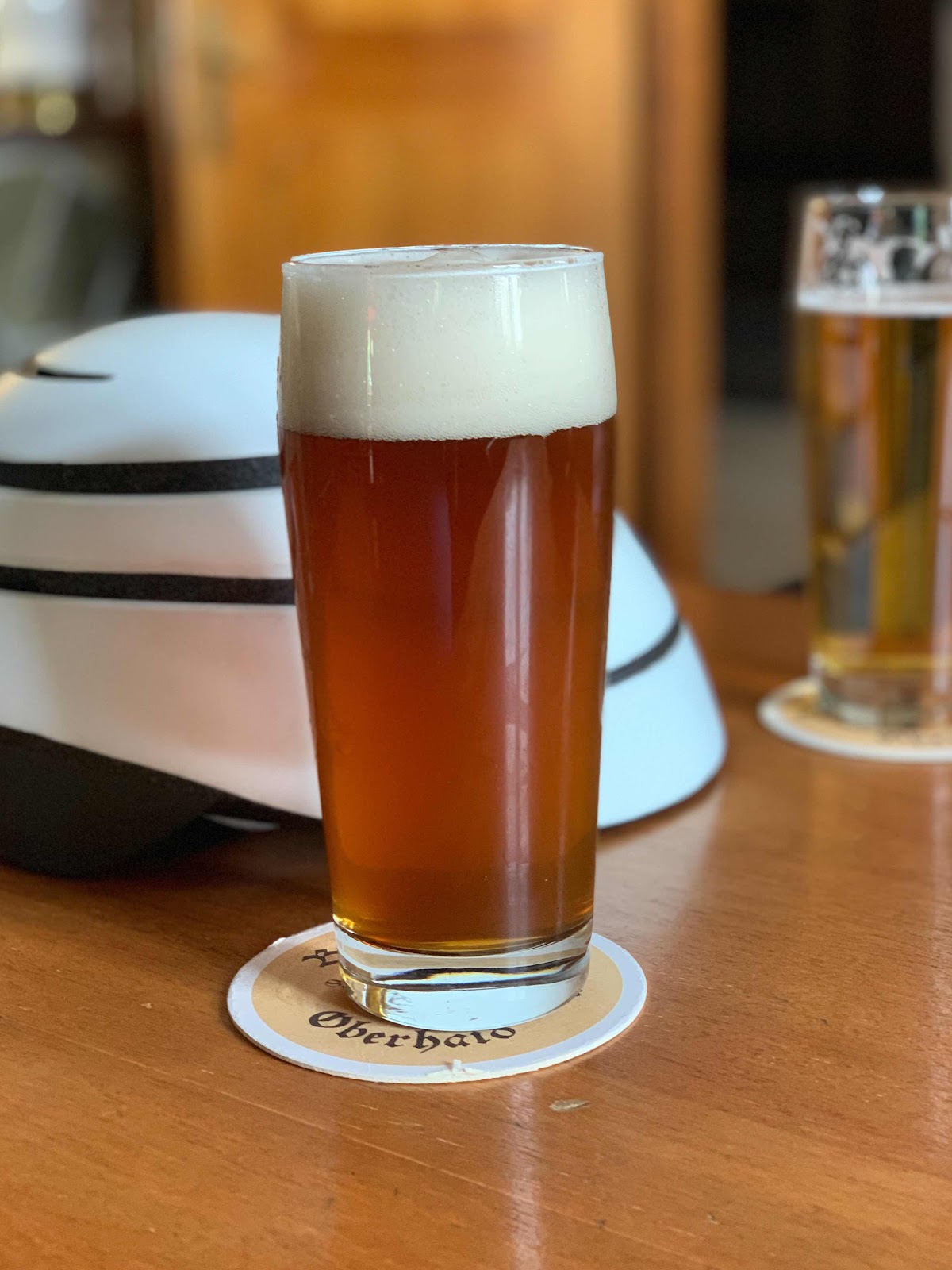 Next stop was Brauerei Eichhorn in Dörfleins. There are a solid brewery, all of their beers are good and their Dunkel is one the best around. I heard they had a new Rauchbier that was also good. As we pulled into the courtyard I got a sinking feeling — There was only one table setup outside and no body to be sign. Then I saw it... 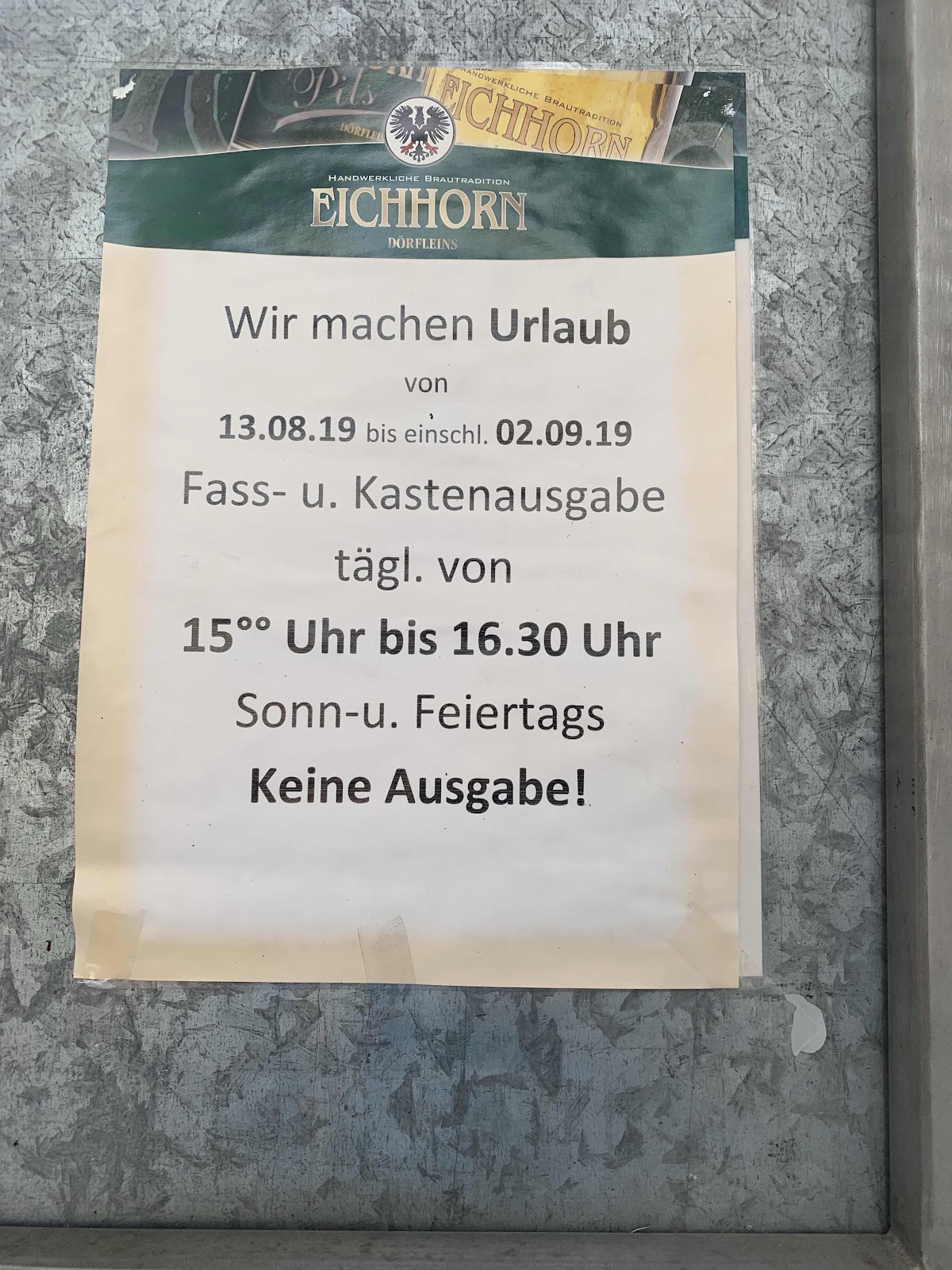 This is a risk in August, the brewery will close down for two weeks or so, so everybody can take a vacation. They often will be open for short hours for bottle sales. I begged for a beer (even a cold bottle) but no joy. So we headed off to Kemmern for another Brauerei Wagner.
When we got there about half an hour after they opened the umbrellas were not yet unfurled and the courtyard was empty except for two guys drinking and smoking. There was also a big sign saying “Special today, Pizza.” But the place was closed, except you could buy a bottle or two. Not a holiday, they would be open the next day — one of the other joys of rural Franconian breweries, sometime they just hang a “Gone Fishing” sign on the door and stay closed for a random day.
The goods was the Wagner Keller was open, so we headed back thru town and crossed the Main and rode north. Unfortunately we missed the turn for the Wagner Keller and ended up at the Leicht Keller which serves the beer from Schlossbrauerei in Reckendorf. A large industrial brewery whose beers are (mostly) not very interesting. So we backtracked, found the turnoff and after a bit of an uphill ride we reached the Keller. 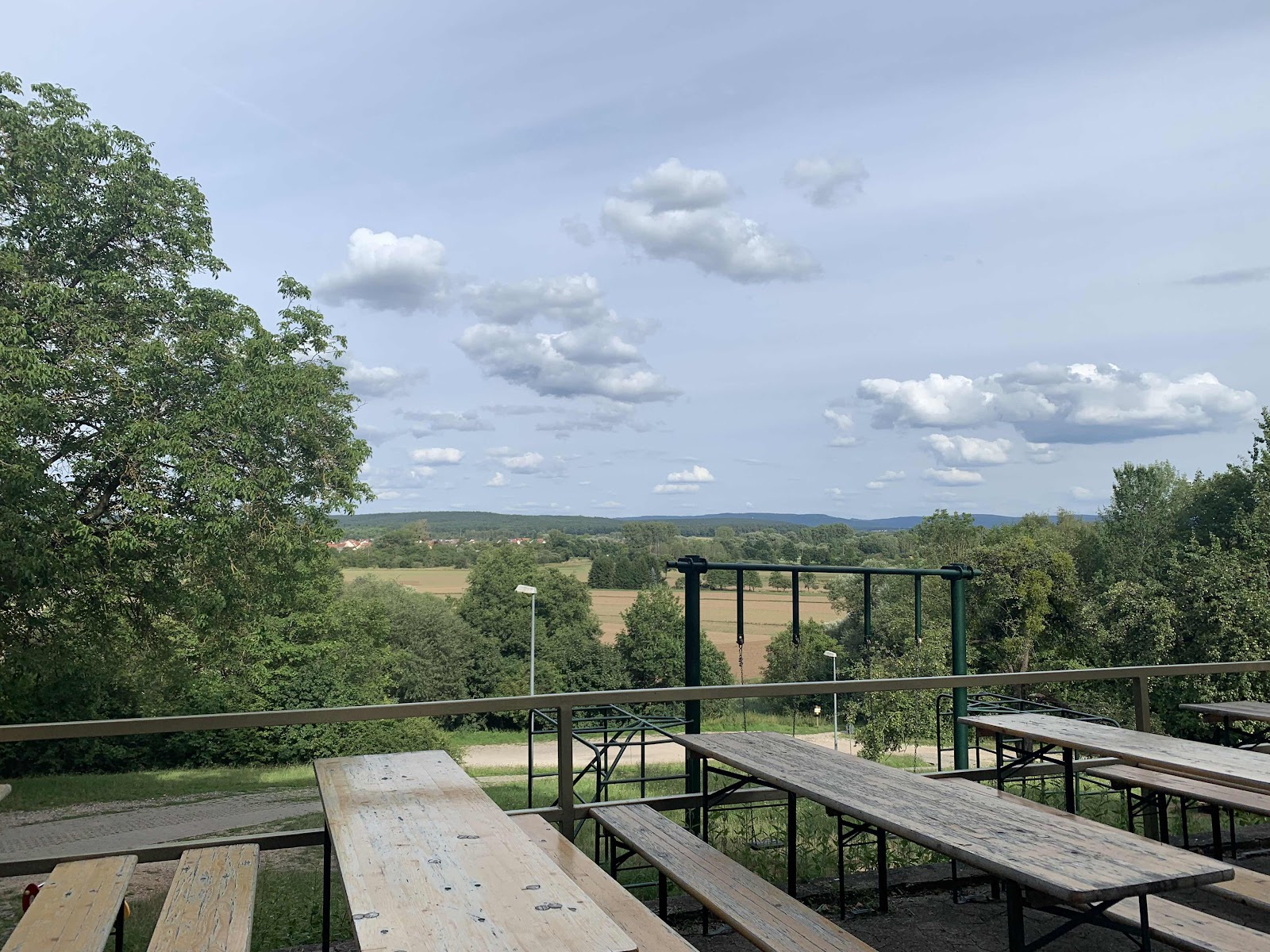 A nice view and it made the beer taste even better. They have their Pils (my favorite) and the Lager on tap. We each had one of each. Also some bratwurst and a cold meat plate to fortify us for the ride back. 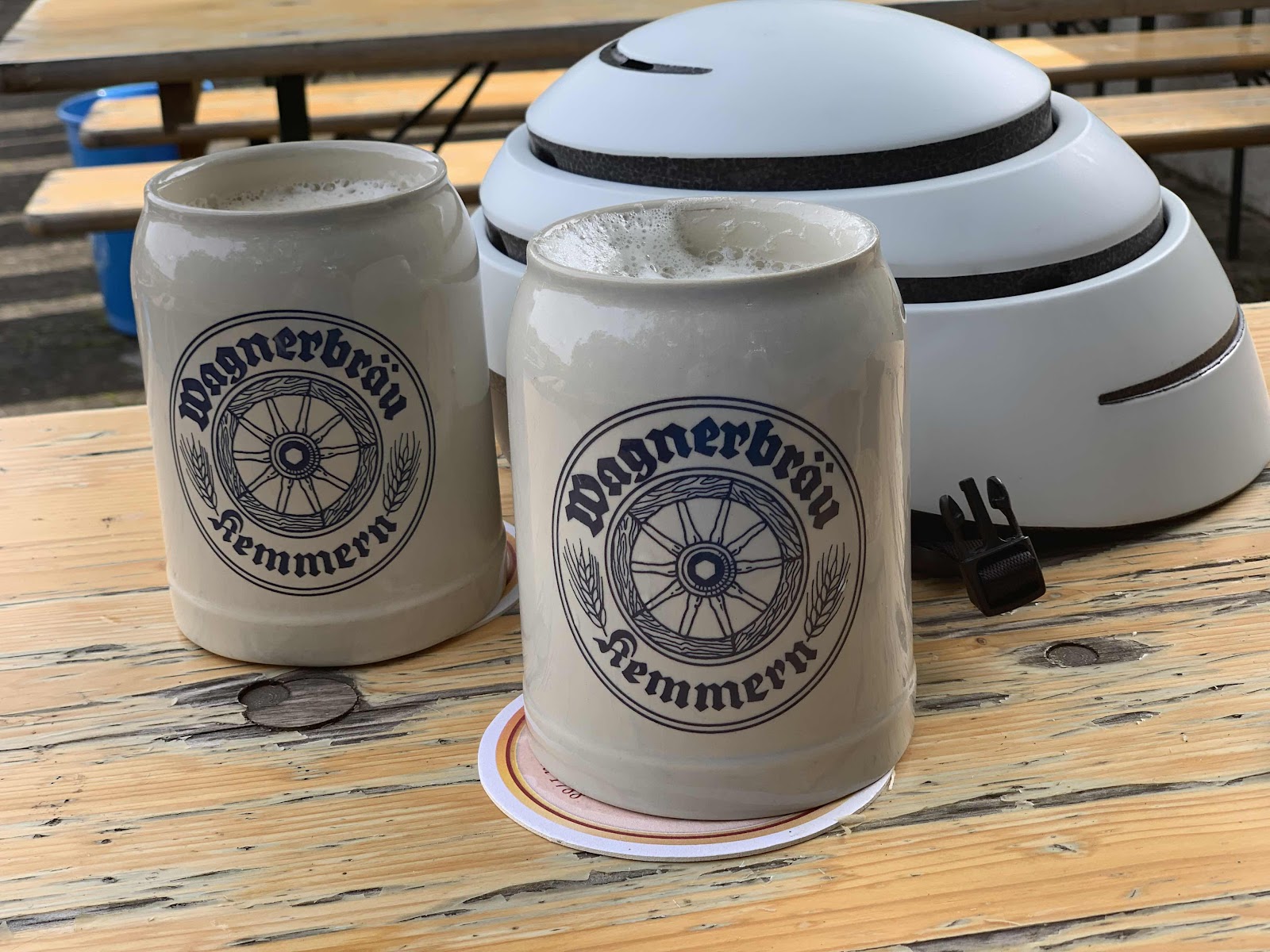 So the day was sort of a bust, beer wise but it was a nice ride. We decided to head back to Bamberg and finish up the days quota of beer at Spezial. I started with the U because I hadn’t had one yet. Delicious as always. 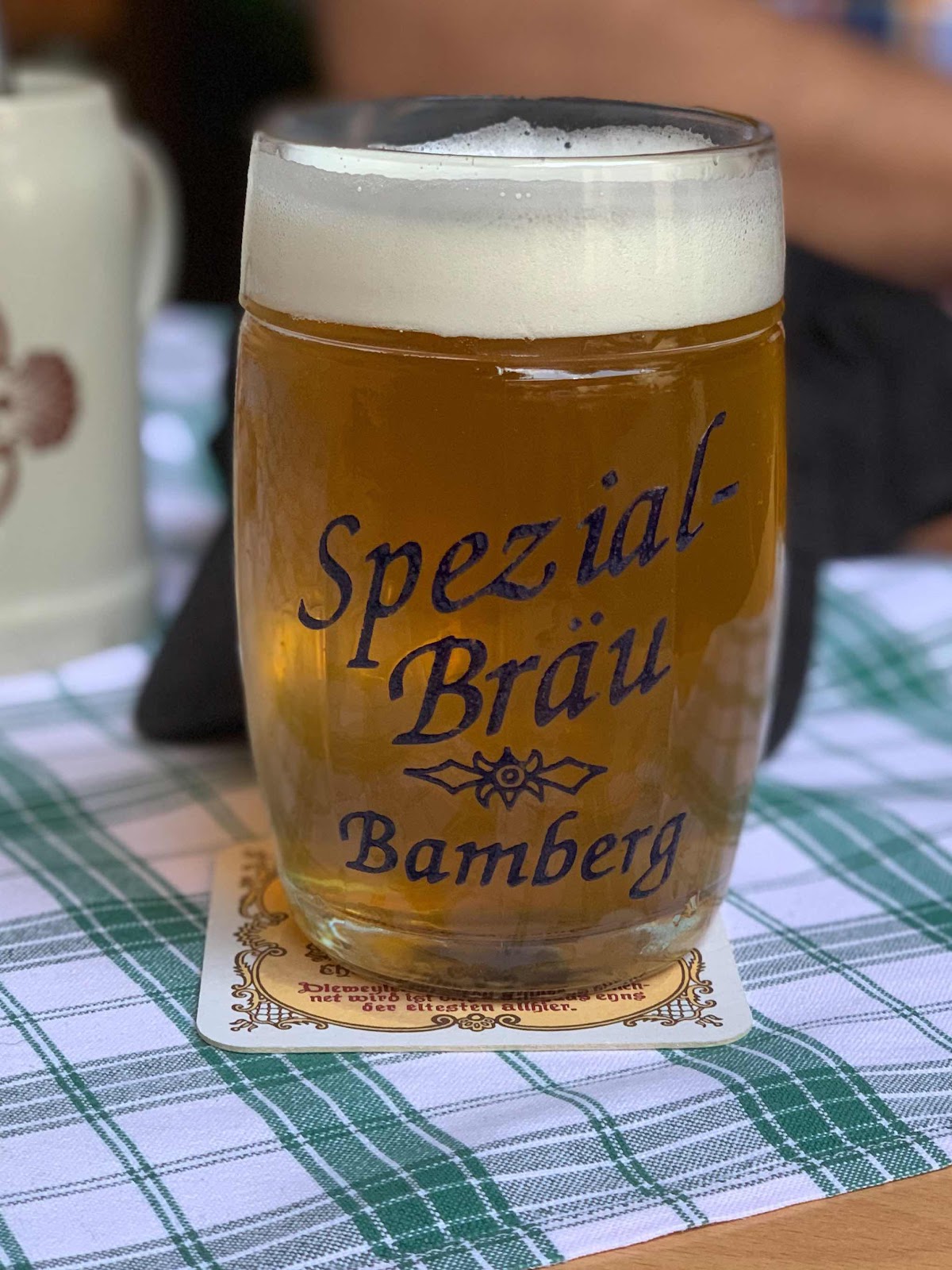 The soup of the day was Potato, with an optional Weinerla. That seemed about right so one of those with another beer. 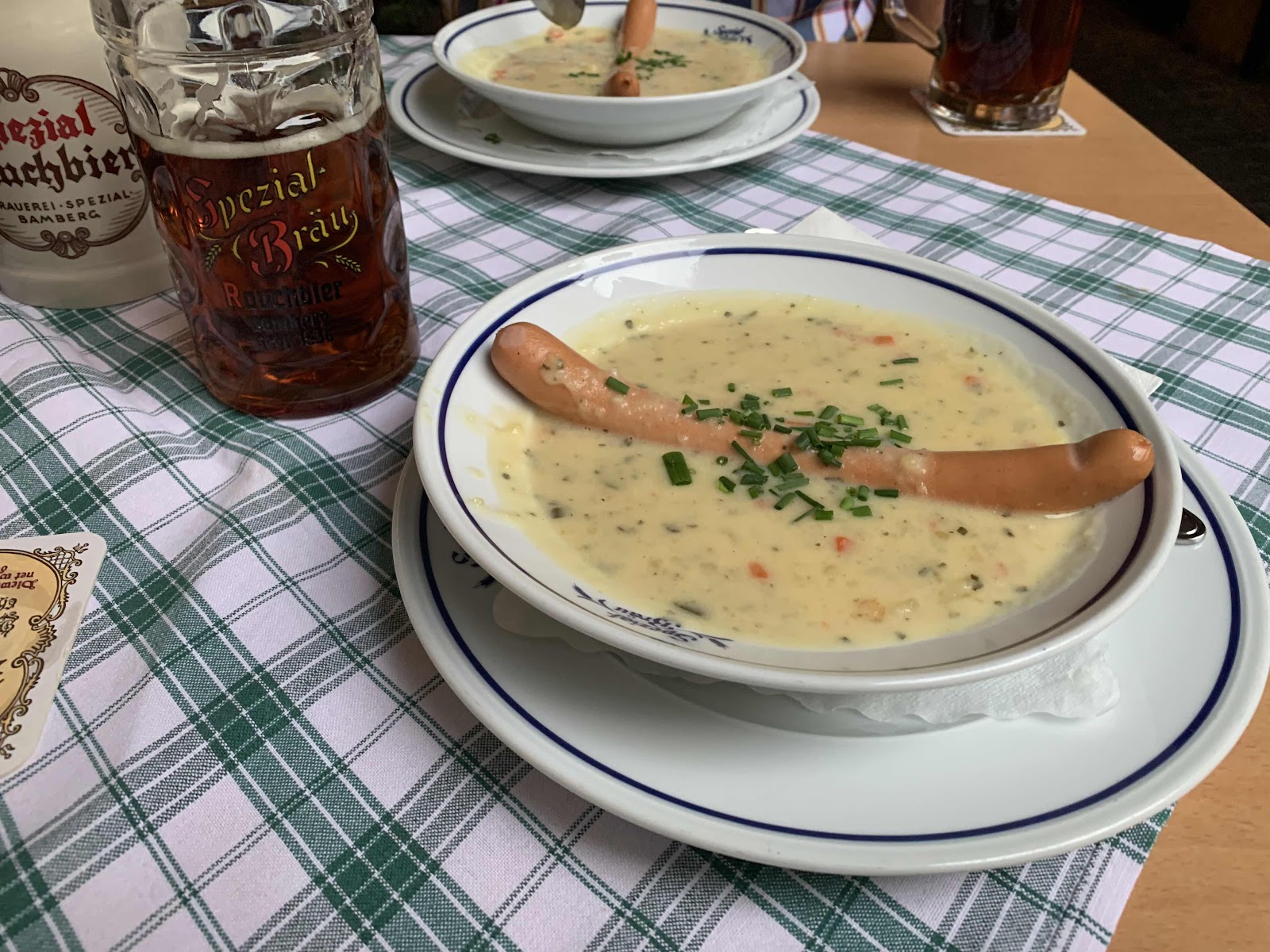 And I can’t leave without a close up of this fine beverage. 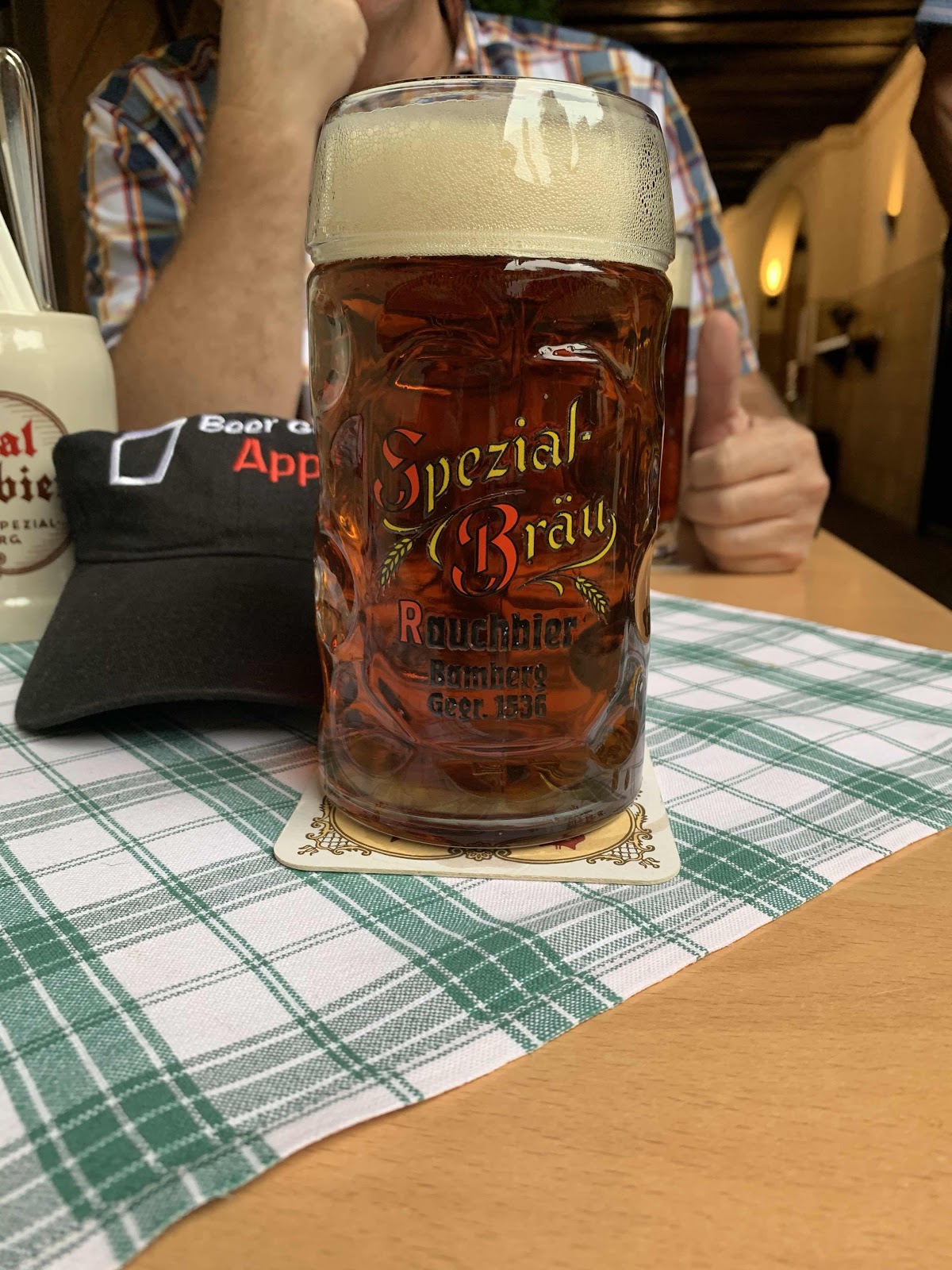 And as a public service — Spezial will be closed for their holidays soon. 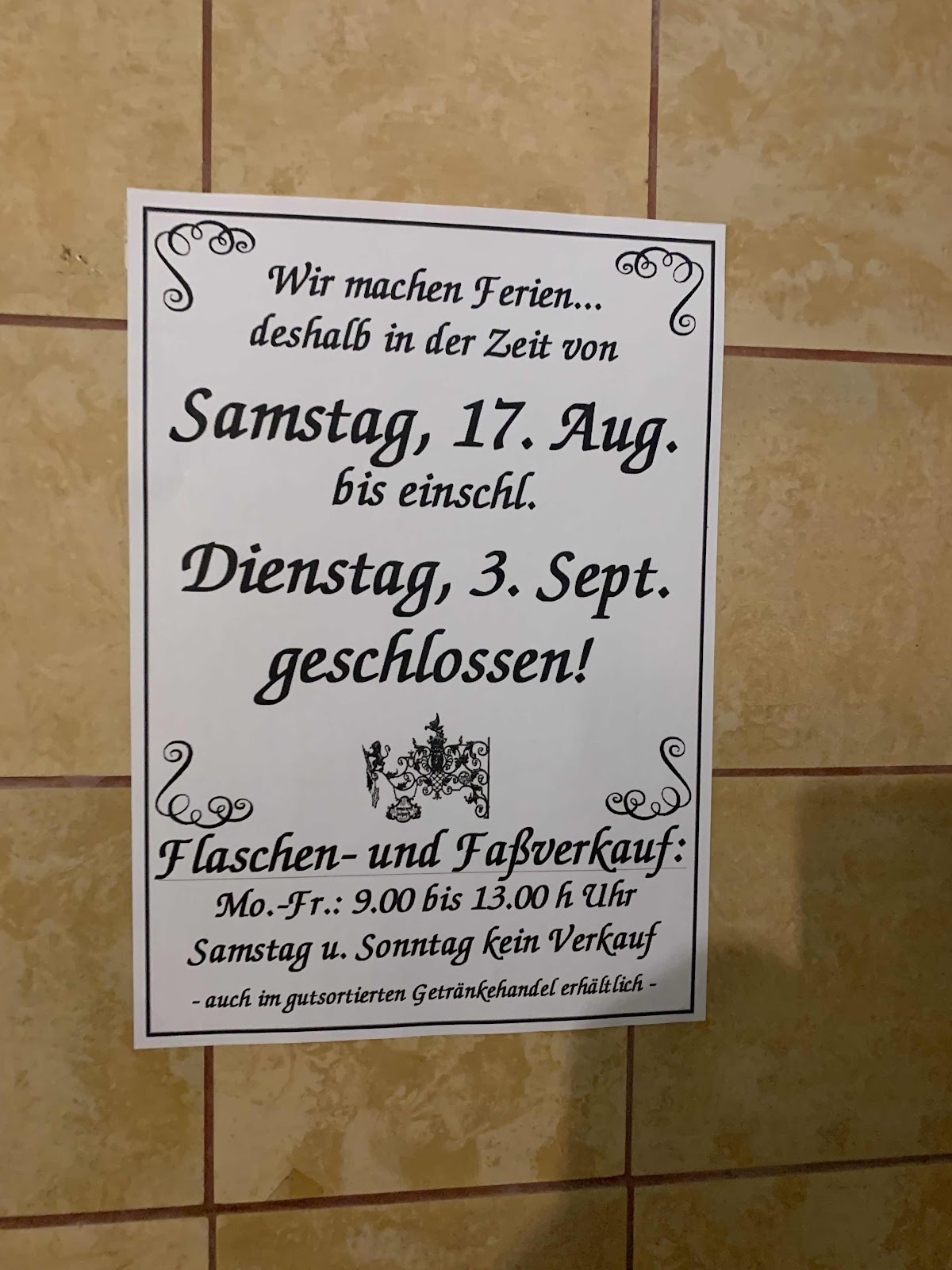