First a note about lack of river traffic: It turns out both the Danube and Rhine rivers are too low for most boats to navigate. That may explain why the cruise boat we saw seemed to be empty.
Our plan for the day was to head for Brauerei Wagner, Merkendorf. They have been closed for a few weeks on holiday and this was their first day back open.
But first we stopped in at Cafe Abseits for lunch and beer. The beer of the month was the Gänstaller Kellerbier, so I had that and Bob had the always excellent Mönschambacher Lager. 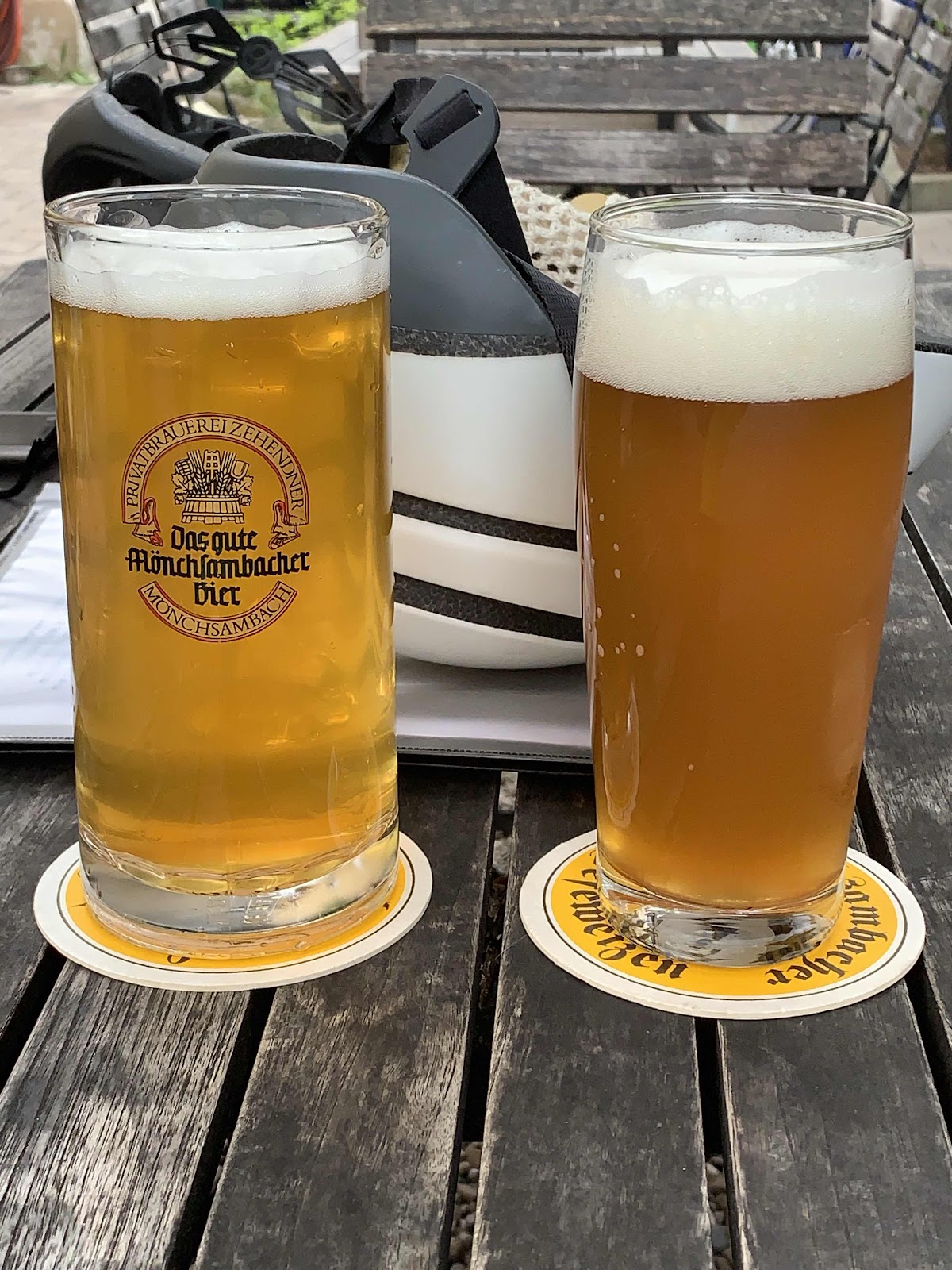 Gerhard also brought out a couple of beers he thought we might be interested in. The first was a “Fränkisches Rotbier” by a new contract brewer BroBier, run by two brothers. Their beers are mostly brewed by Binkert in Breitengüssbach. It was fine but not particularly special. 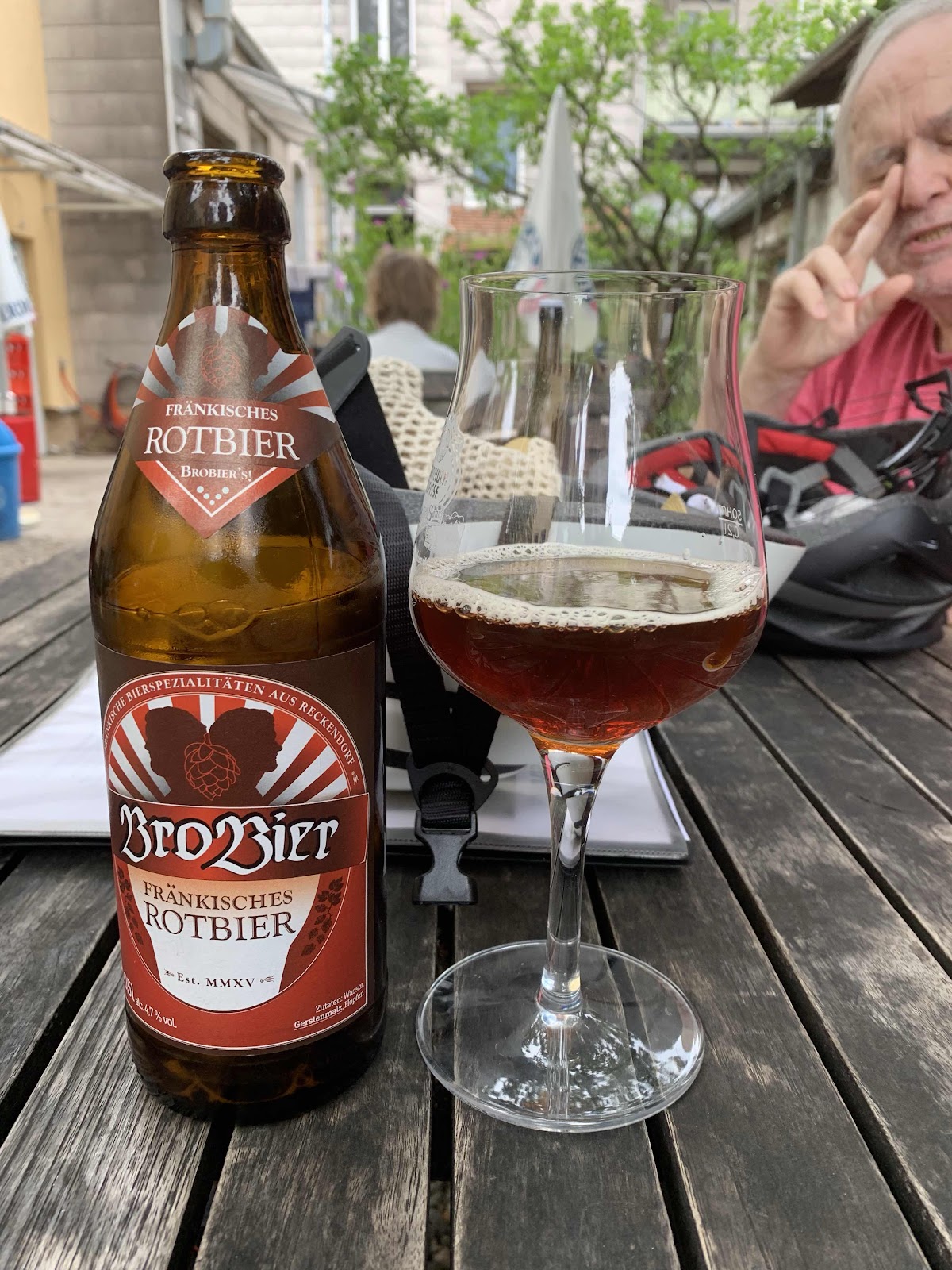 Next was a Maibock from Meine Bräu in Hof. It was very good. A bit maltier in the finish that a typical Maibock, there were enough hops to make it very drinkable. 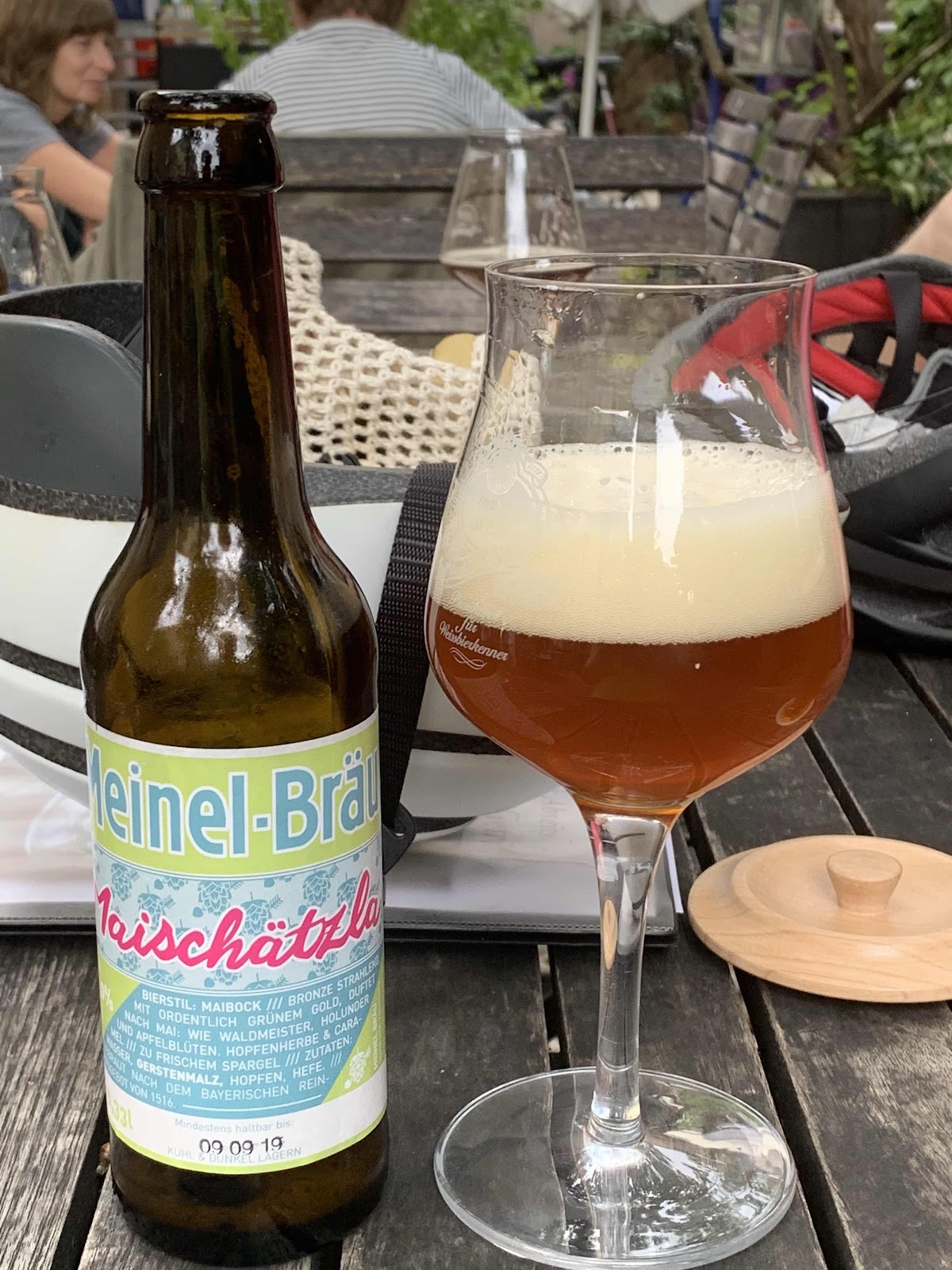 We felt a few drops of rain and Bob checked is weather app... 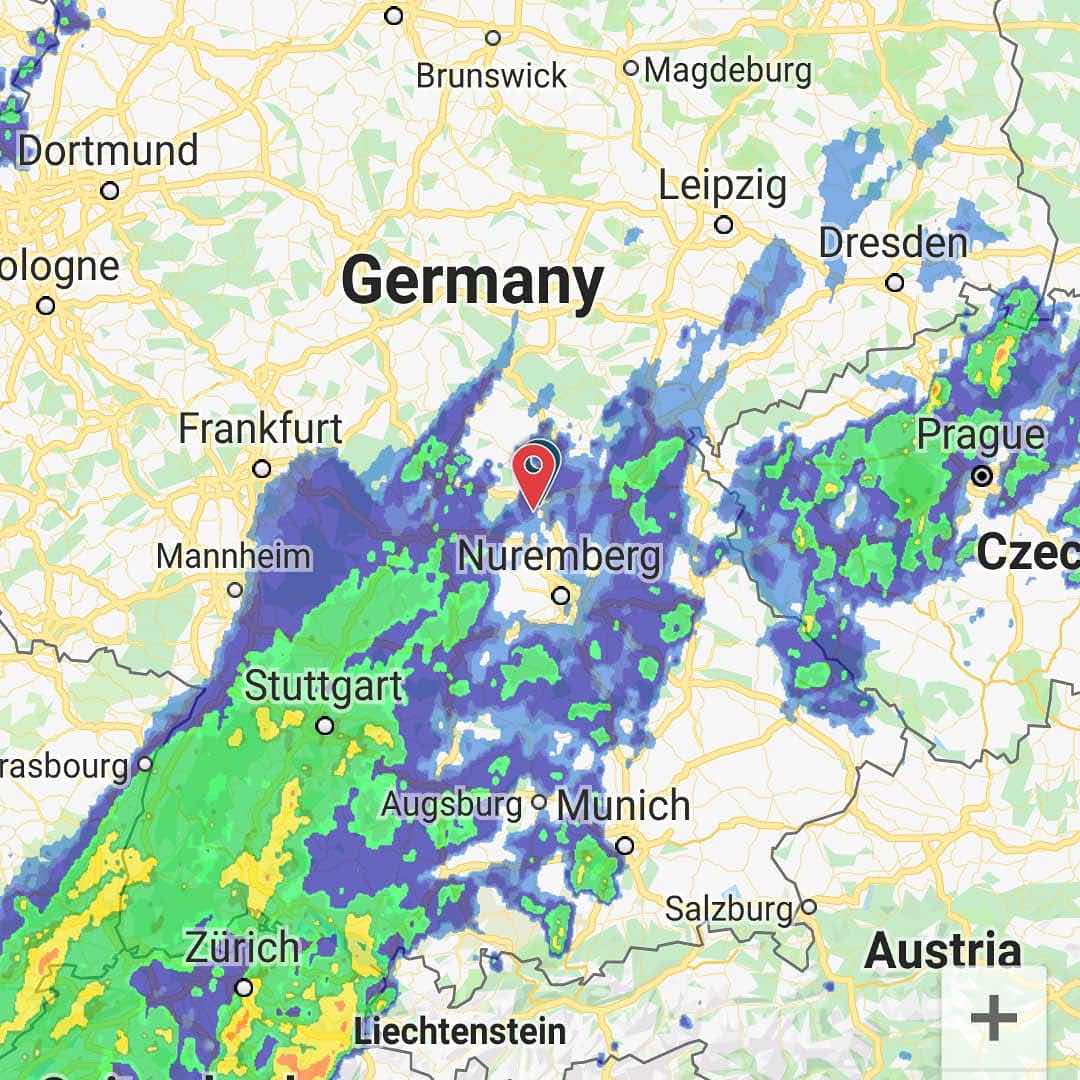 It looked very much line we’d probably be riding back from Merkendorf in the rain, so we bailed. Gerhard mentioned that Hopfengarten did have their brewery up and running and technically they were open so we headed over there. 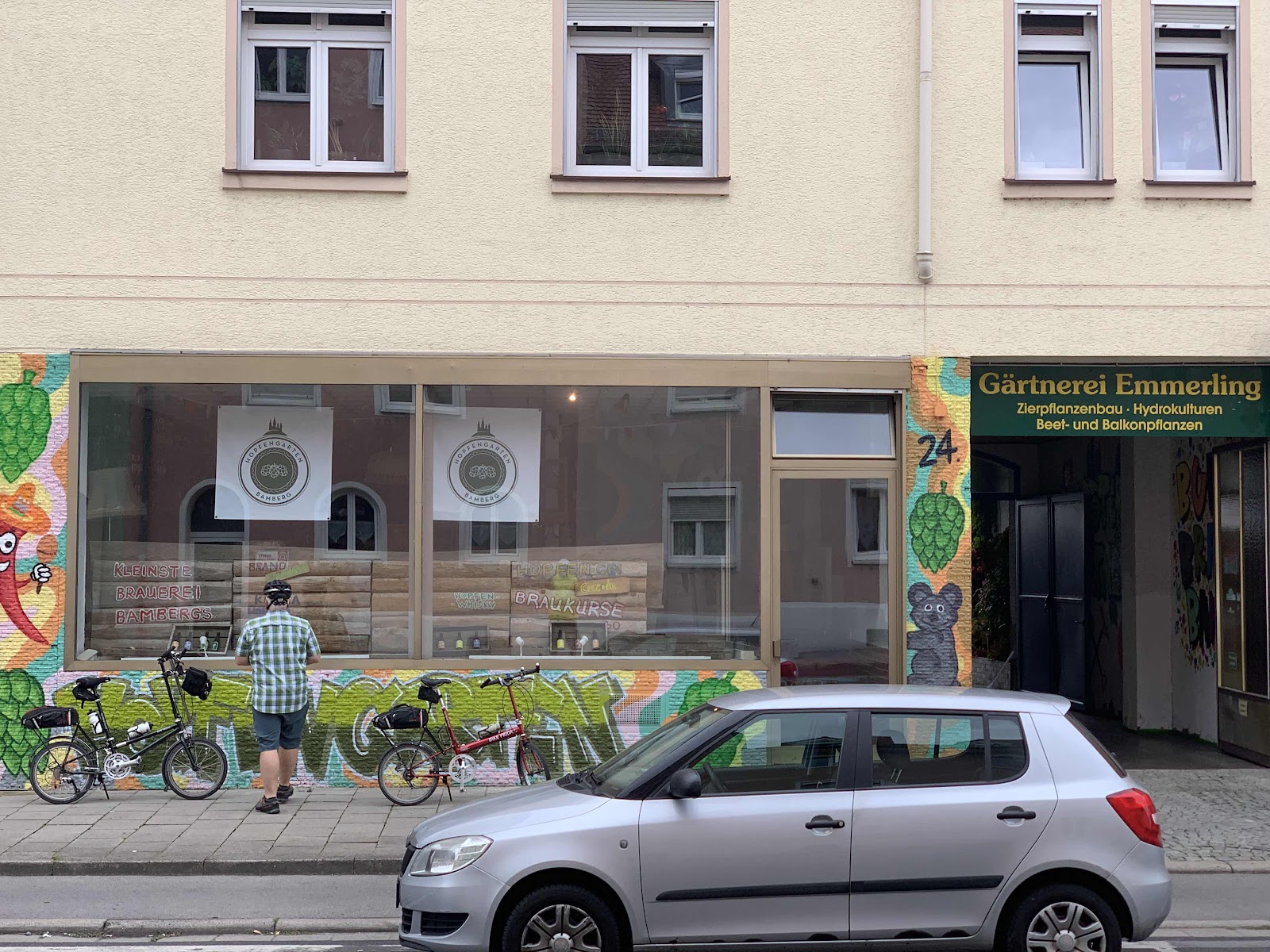 Behind the building is a whole complex of greenhouses and large garden patches, growing everything from herbs, tomatoes (200+ varieties), chilis and hops (hence the name). They basically specialize in taking a base Helles Lager and flavor them with “botanicals.”  The effect is usually fairly subtle — you can taste the underlying beer, but the added flavor come thru.
First up was Minz-mann — flavored with mint. You are going to get tired of reading this, but it worked but I can’t explain exactly how. A beer with a bit of mint in the nose and in the background flavor. 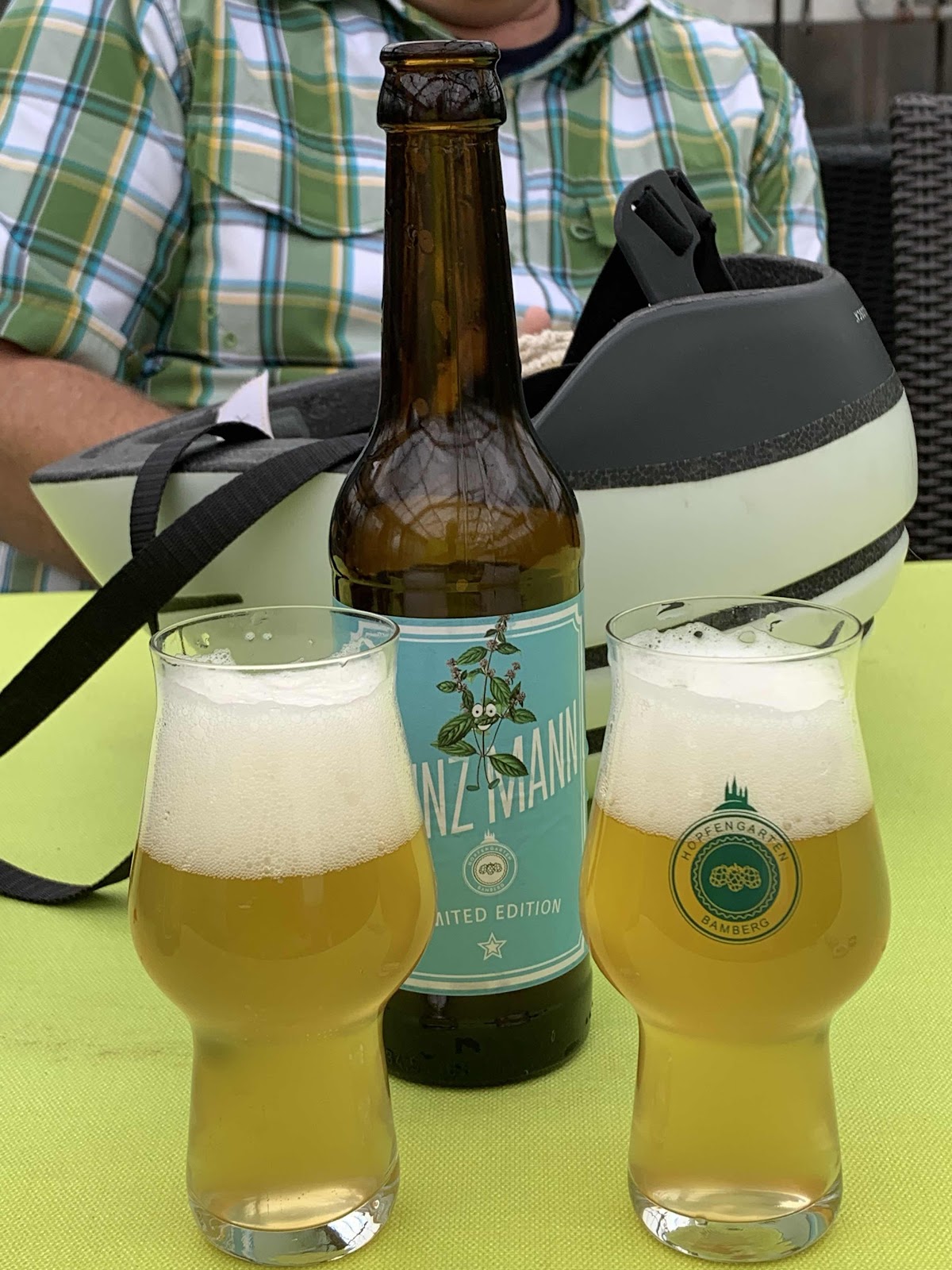 Next was the lemon Zitronic. This one did not work as well for me. It was more a lemon oil aroma and flavor which to be brought “Lemon Pledge” furniture cleaner to mind. I sort of expected more a “Radler” character and it wasn’t that. 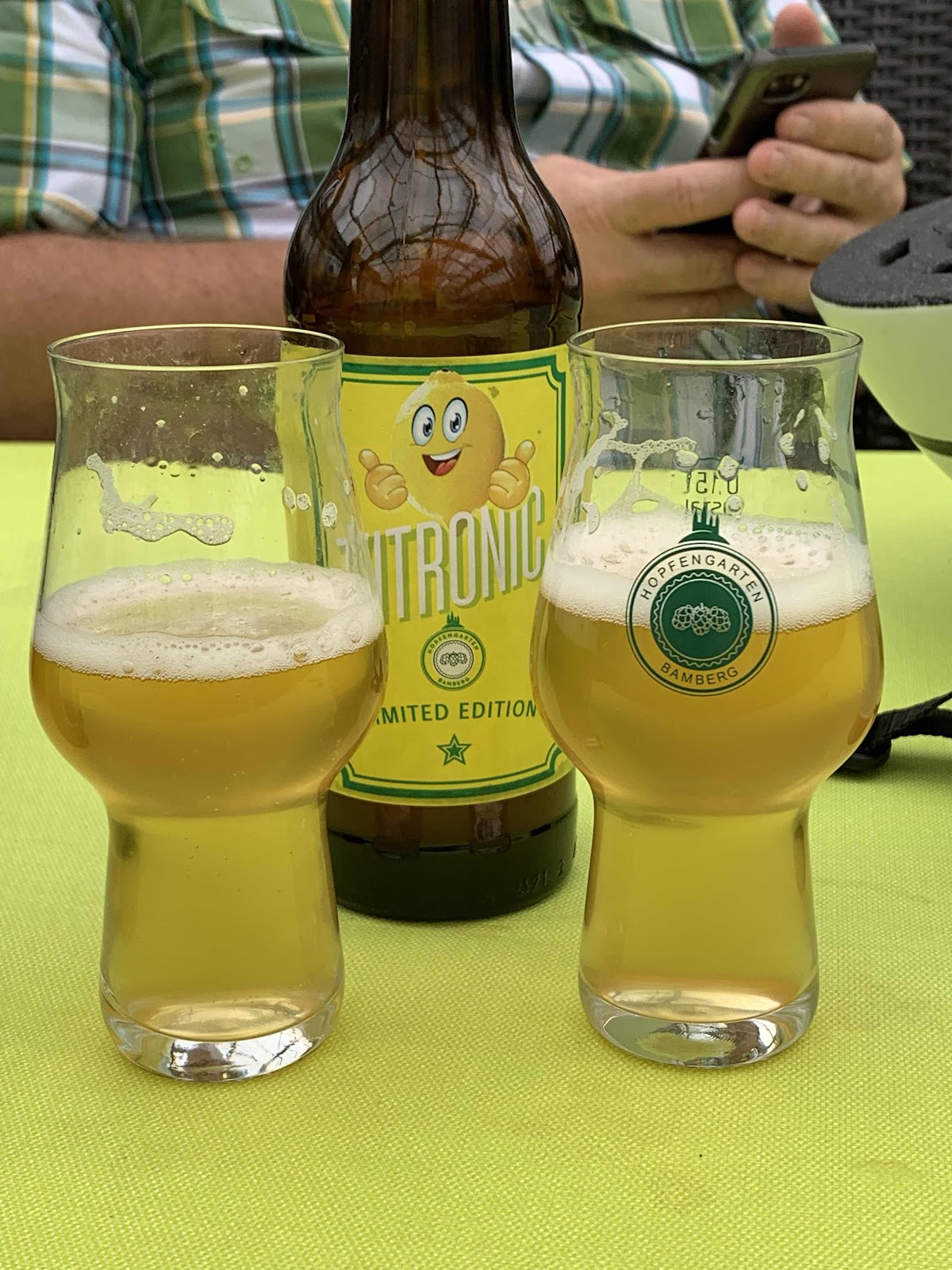 Third was Himbo,  raspberry. You’ll notice the beer isn’t pink. It had a nice bit of raspberry in the nose and just a hint in the flavor. It was very enjoyable. 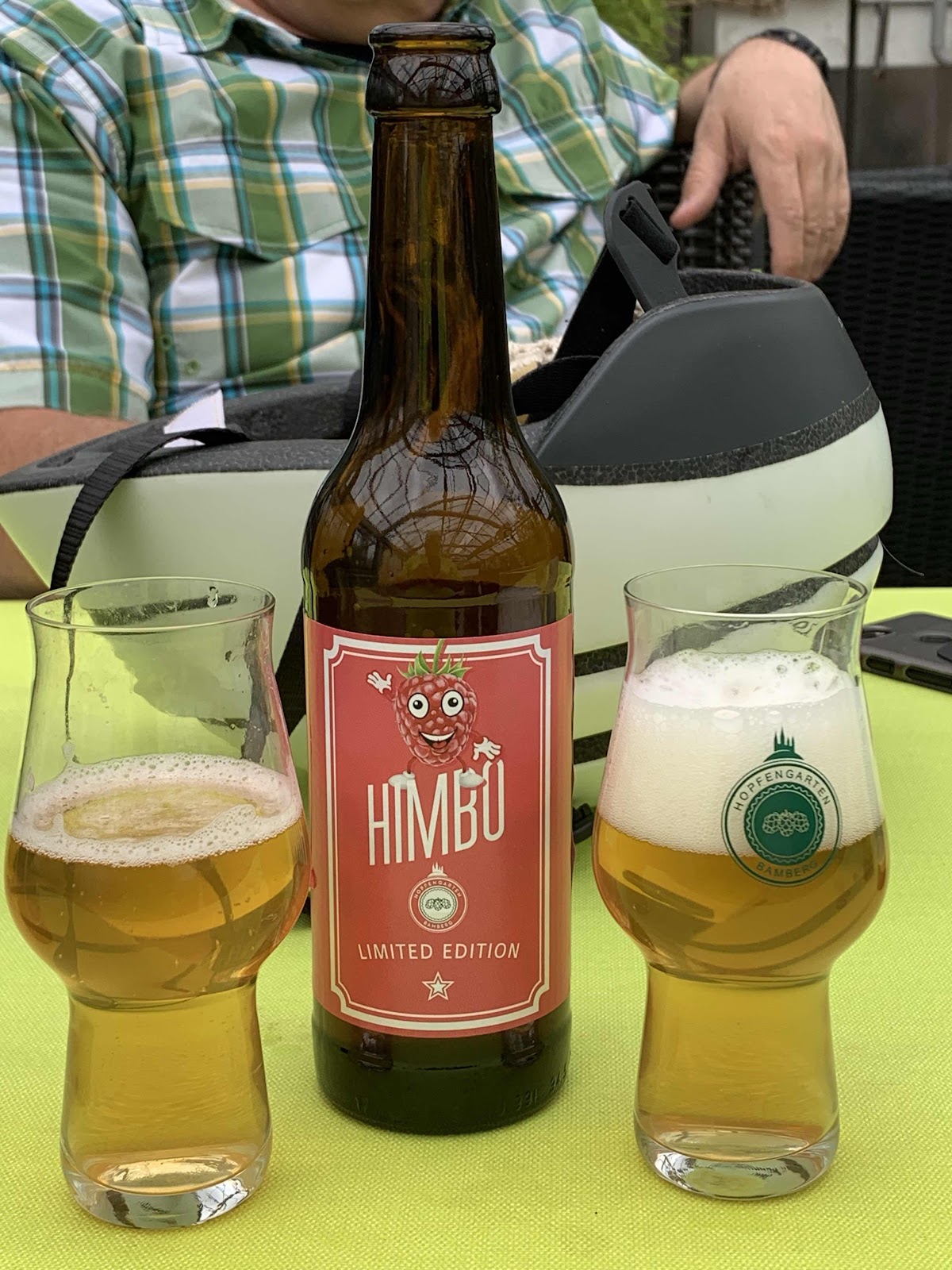 The final beer was Gurki — you guessed it — a cucumber beer. If you like cucumber water you will like this beer. Imaging brewing a beer using cucumber water and this is what you’d get. It was the strongest flavored of the bunch. Bob really liked it, but it was a bit too much cucumber for me. 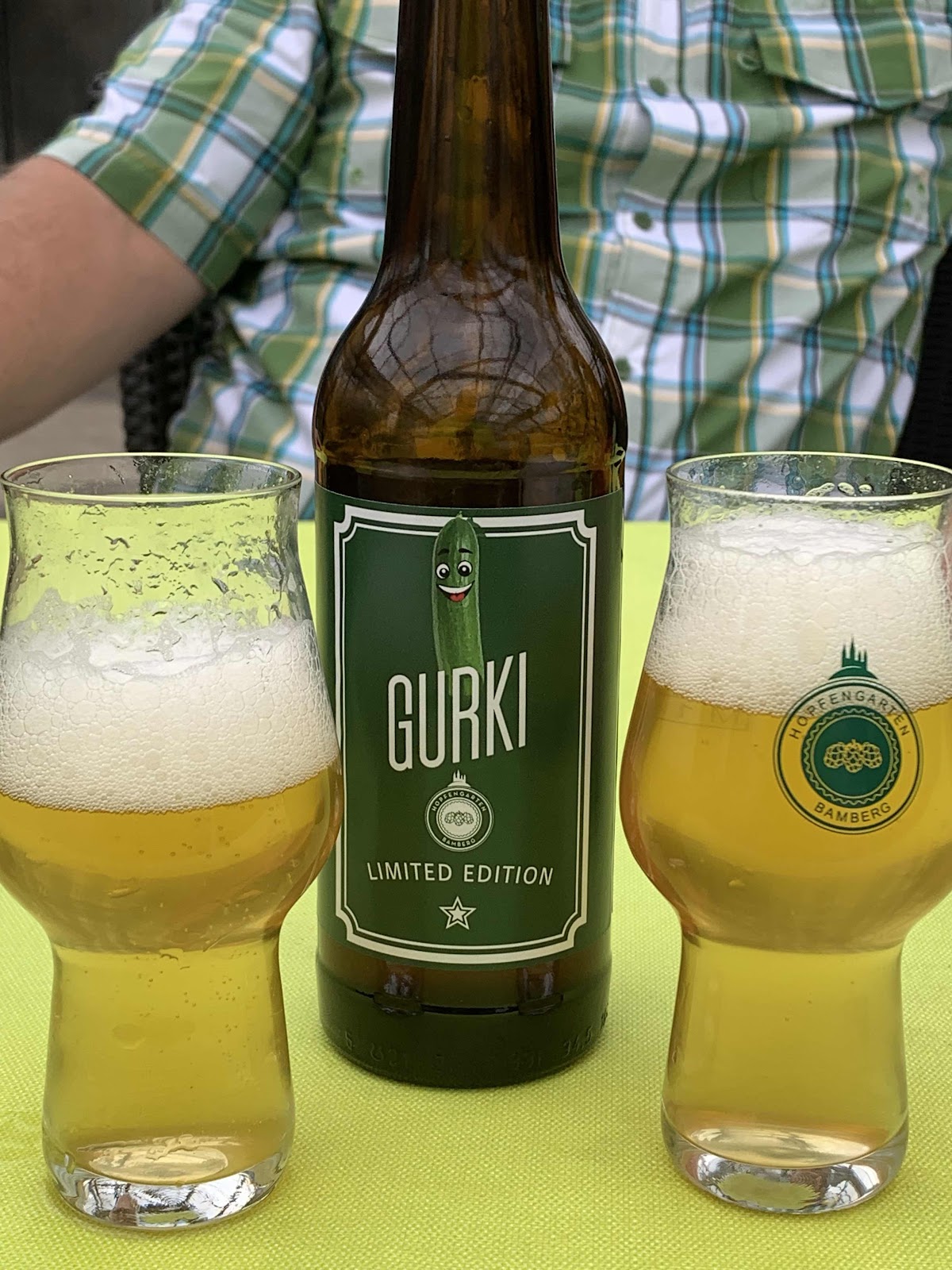 We didn’t get a chance to try “Tomaten Joe” their tomato beer. Some Swedish beer friends had tried it and really liked it. Next time! The also make a Hopfen-Gin which also sounds interesting and will have to wait for the next visit.
They were in the process of (hand) bottling a batch so I couldn’t get a good shot of their brewery but they do have one. It is small, what you might expect a restaurant that wanted to brew beer to install. 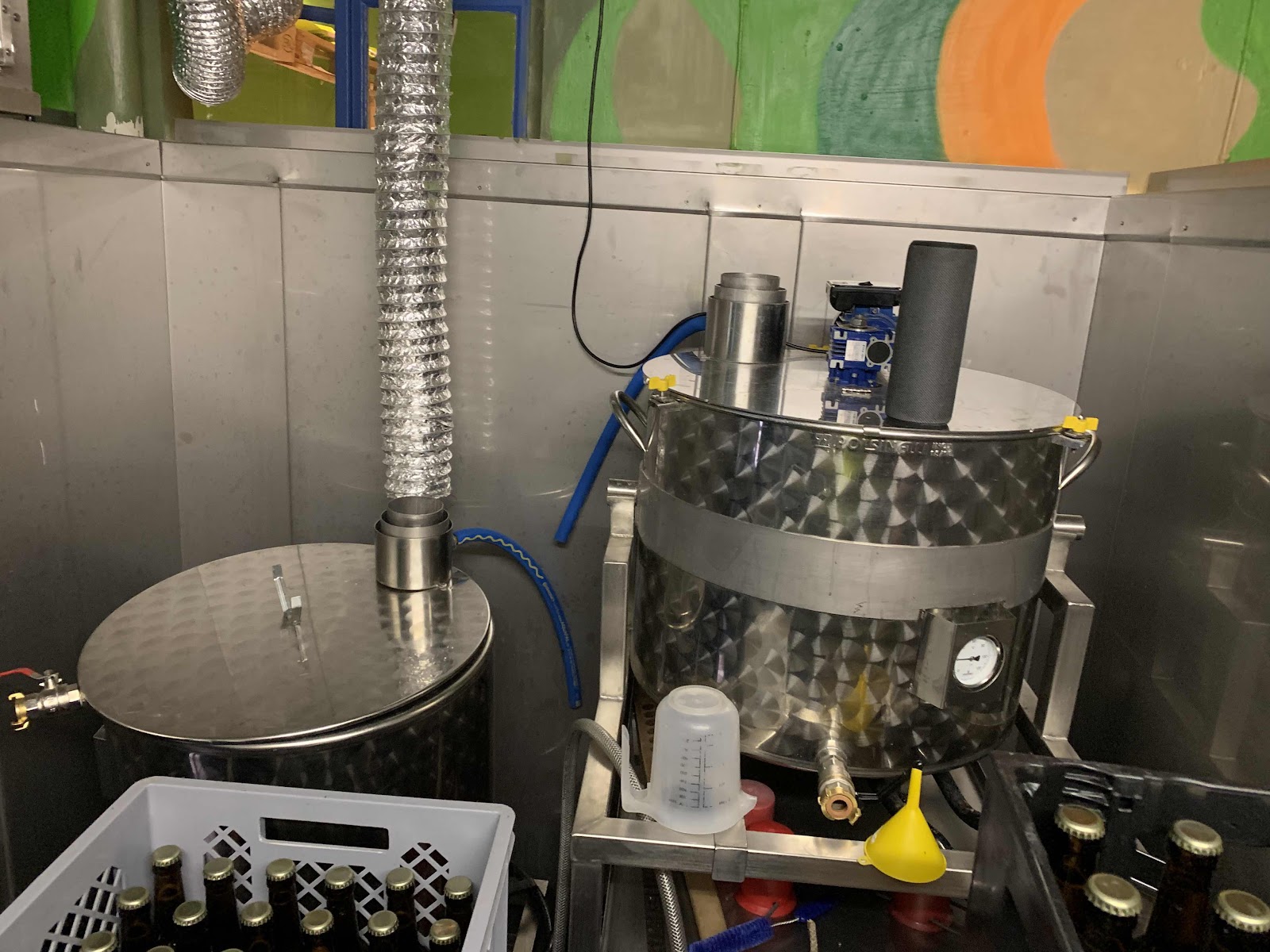 They also had flowers growing everywhere — this picture doesn’t do it justice — it was a wall of color. It wasn’t raining yet so we thought we check out one more place. Along the canal side bike path/sidewalk near Wunderburg is a little snack bar stand that has been there forever. Usually as I’d ride by there would be sketchy looking people drinking cheap beer from the bottle and I never stopped. I notice that it had been renovated and upgraded and was now “Kiosk Kunni” and they have a couple of beers from Brauerei Hönig in Tiefenellern on tap — their Pils and Lager. 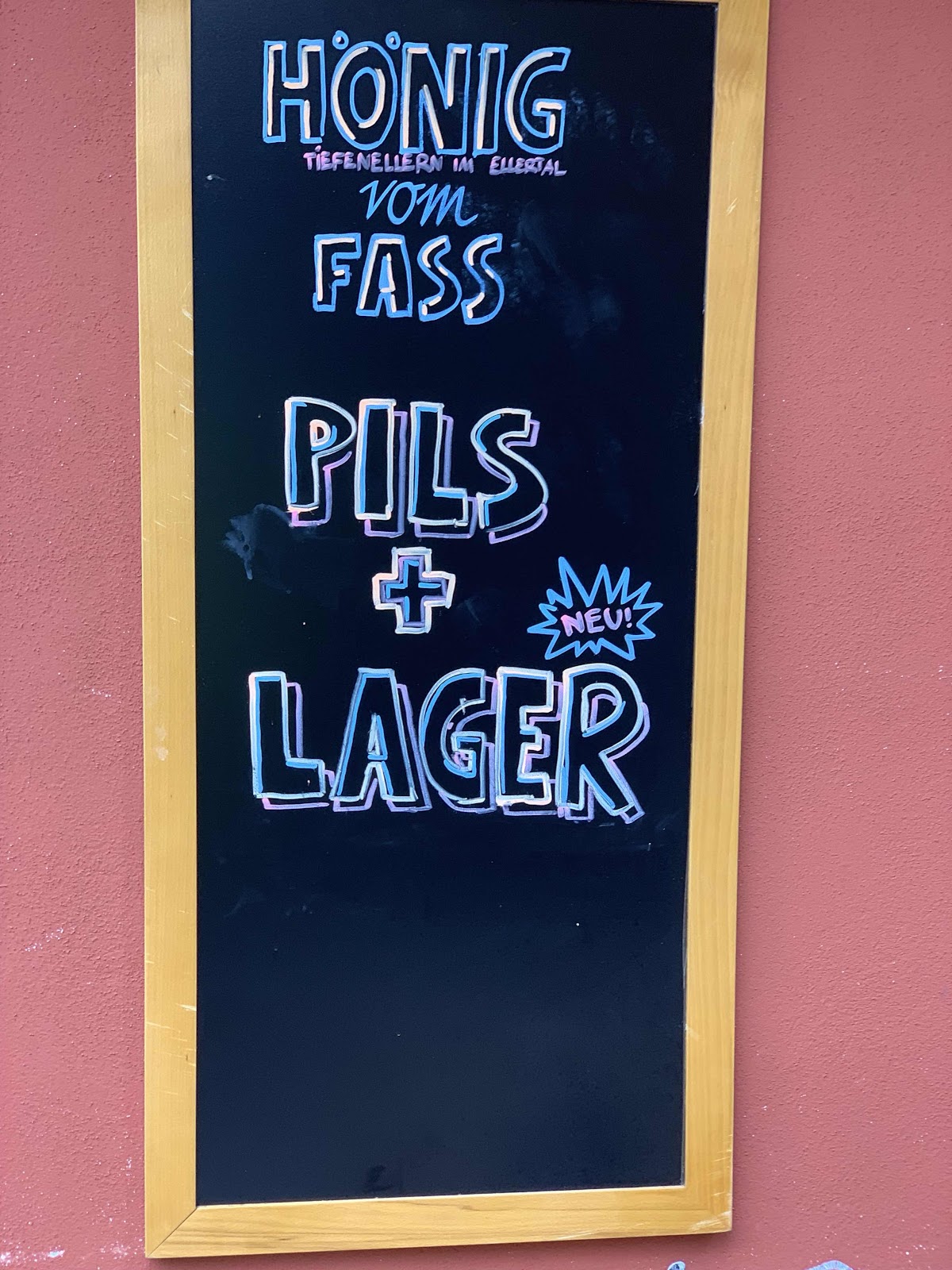 I later learned that initial that had just one beer but was served via a gravity barrel (Bayerische Anstich) but had switched to regular kegs, which I understand because I’m sure their sales depend on the weather. 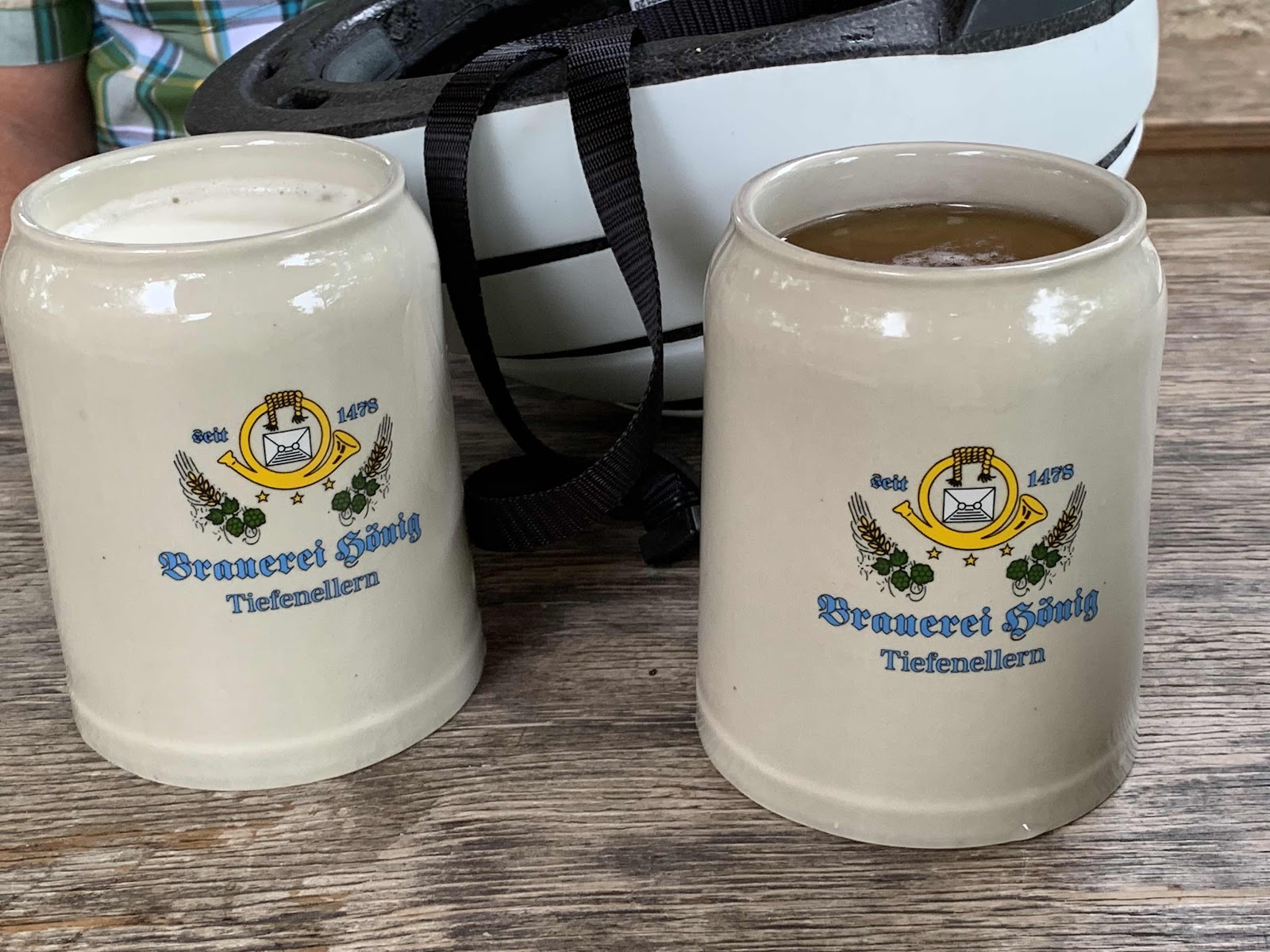 Both were in good shape. As we sat down, the rain started, so we sipped slowly and waited for a break. One came and we made it back to the apartment relatively dry.
We decided to walk down to Fässla for dinner but they were absolutely packed. So we had a Pils (was OK but a little softer, less hoppy than usual) in the schweme. 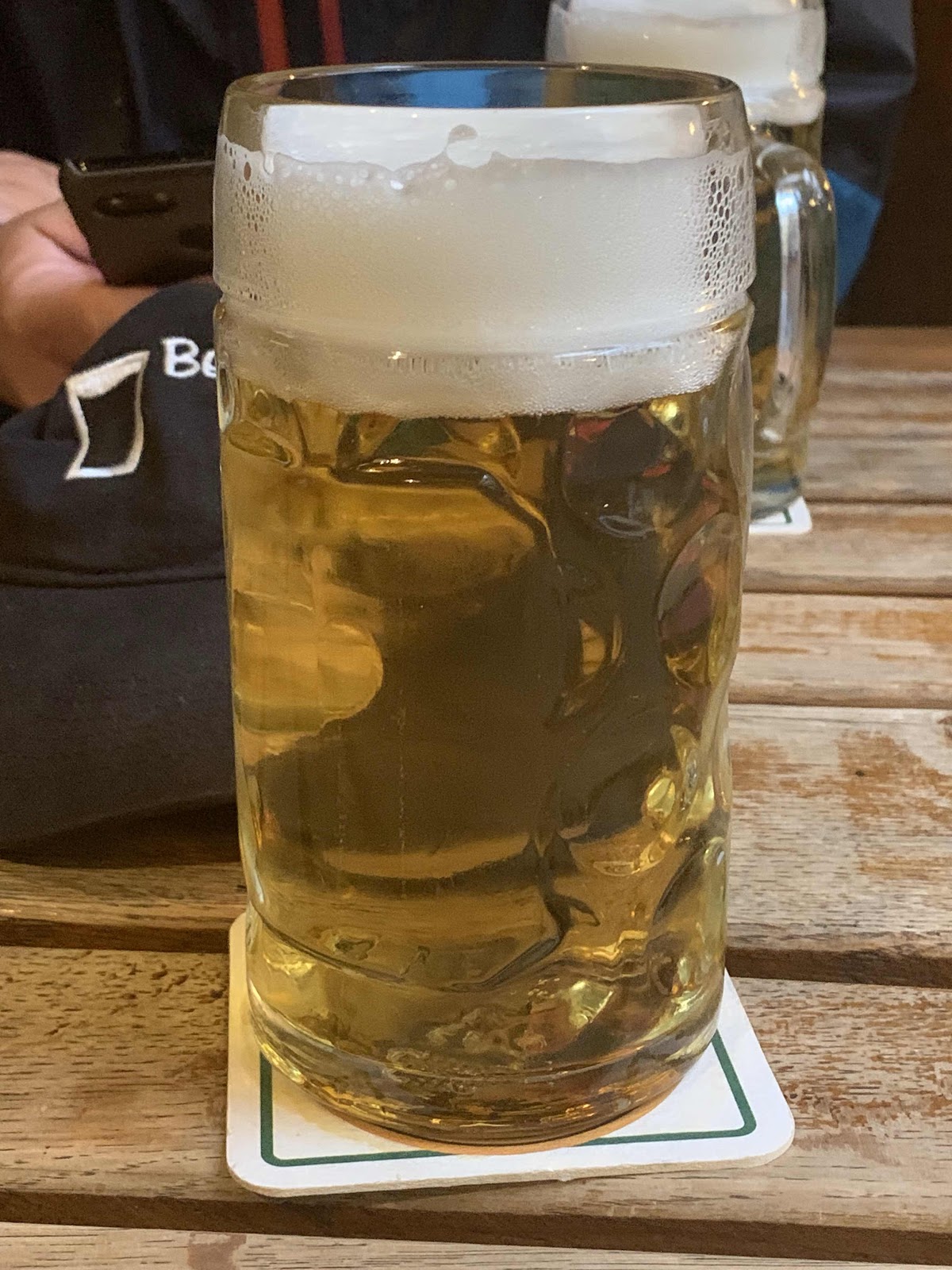 Dinner was a excellent Döner from Imbiss Maramiss up the street.
I am almost embarrassed to post the map, but in the interested of transparency, here it is