One of Bob’s (and my) favorite places is the Biergarten in back of Brauerei Wagner in Merkendorf. It is shaded by mature trees, the beer is good (very good!) and the people friendly. There were on holiday the first week of our trip and only reopened this past Tuesday. You may remember we where headed there and aborted the trip because of rain.  So today’s plan was to ride to  Wagner Merkendorf, drink beer, ride back. Ganz einfach.
So after 11km or so (and a slight uphill from Drosendorf) we were there. 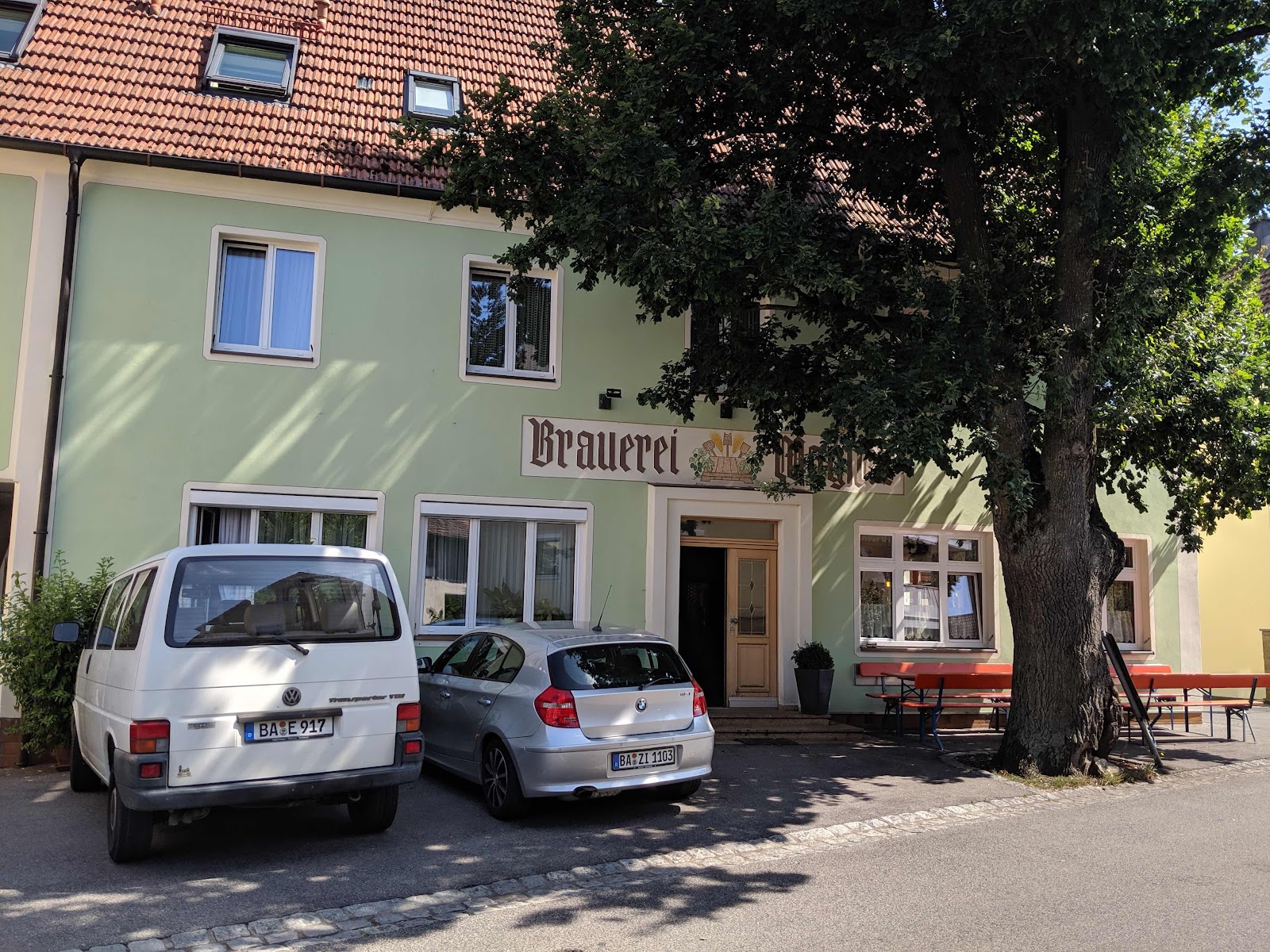 There is a small sign and a beer mug flag out front telling you the garden was open. I probably sat at those benches drinking a beer not realizing there was a Biergarten in back. 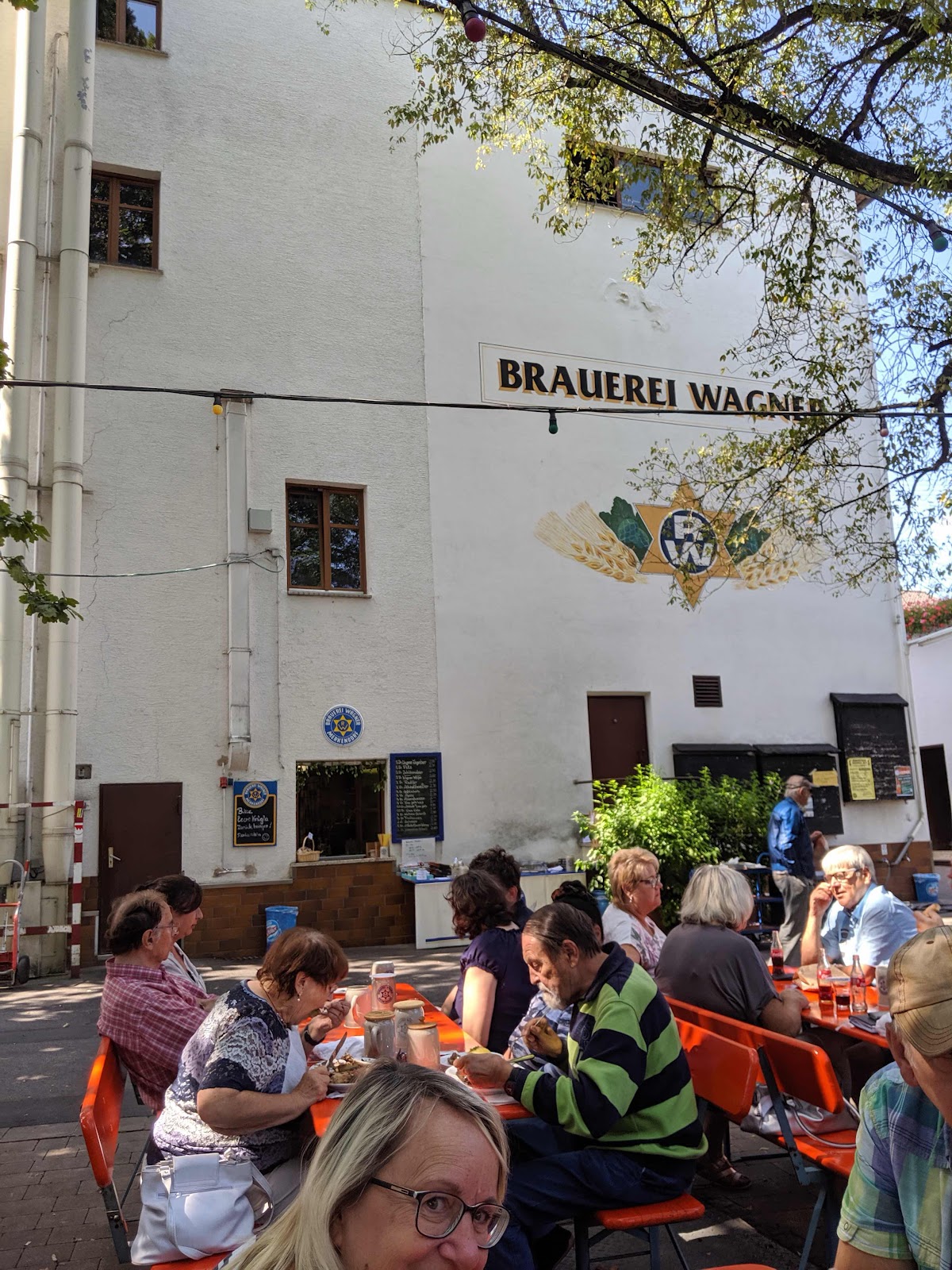 As is typical, the beer is self service. The food though is table service — they come by and take your order and bring the food. Very civilized.
We started with the Ungespundetes Lagerbier. It was good as expected. 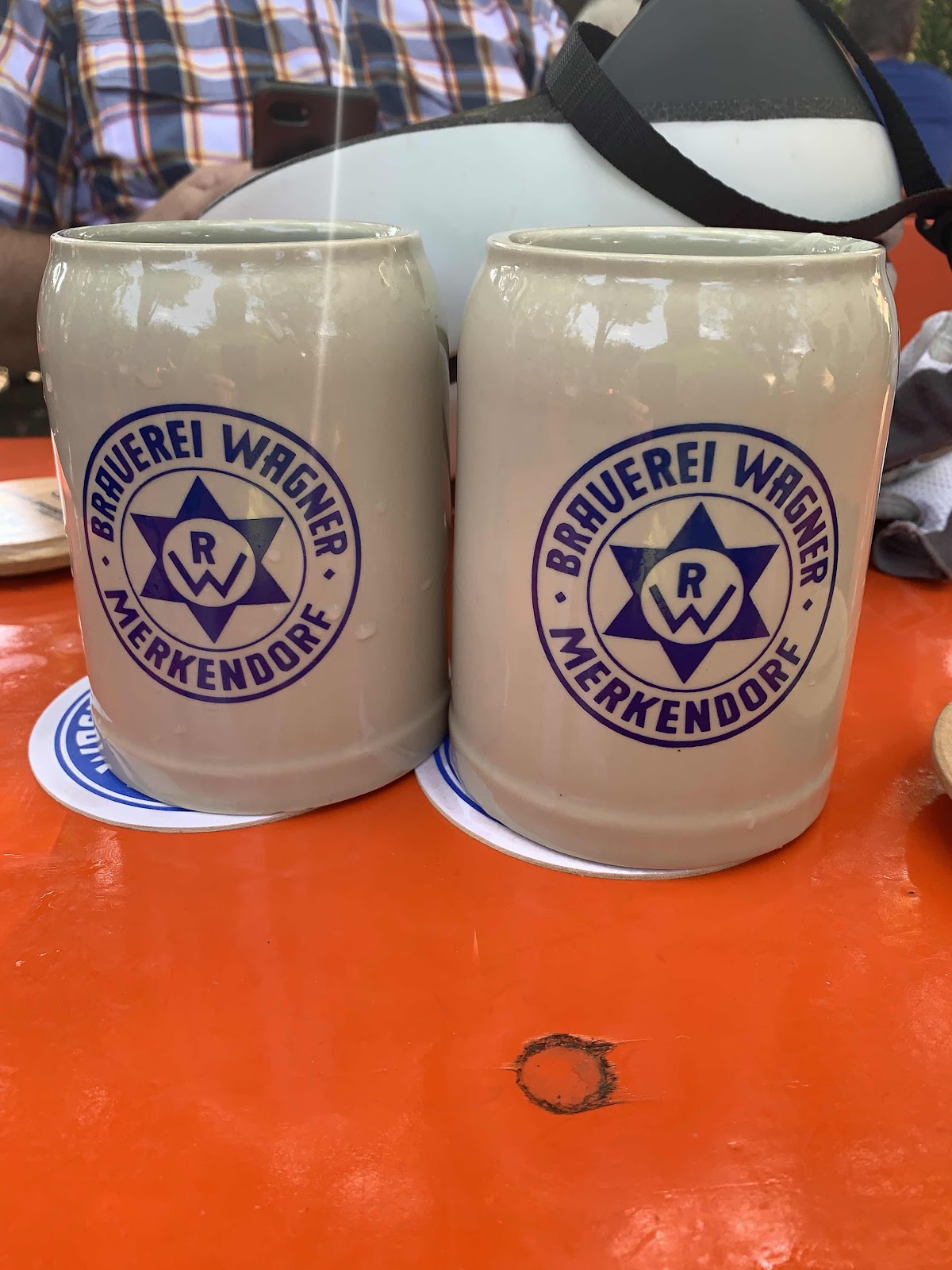 Next up was the Pils. I think I like this a tad more than the Lager, but ask me on a different day and I might reverse the order. 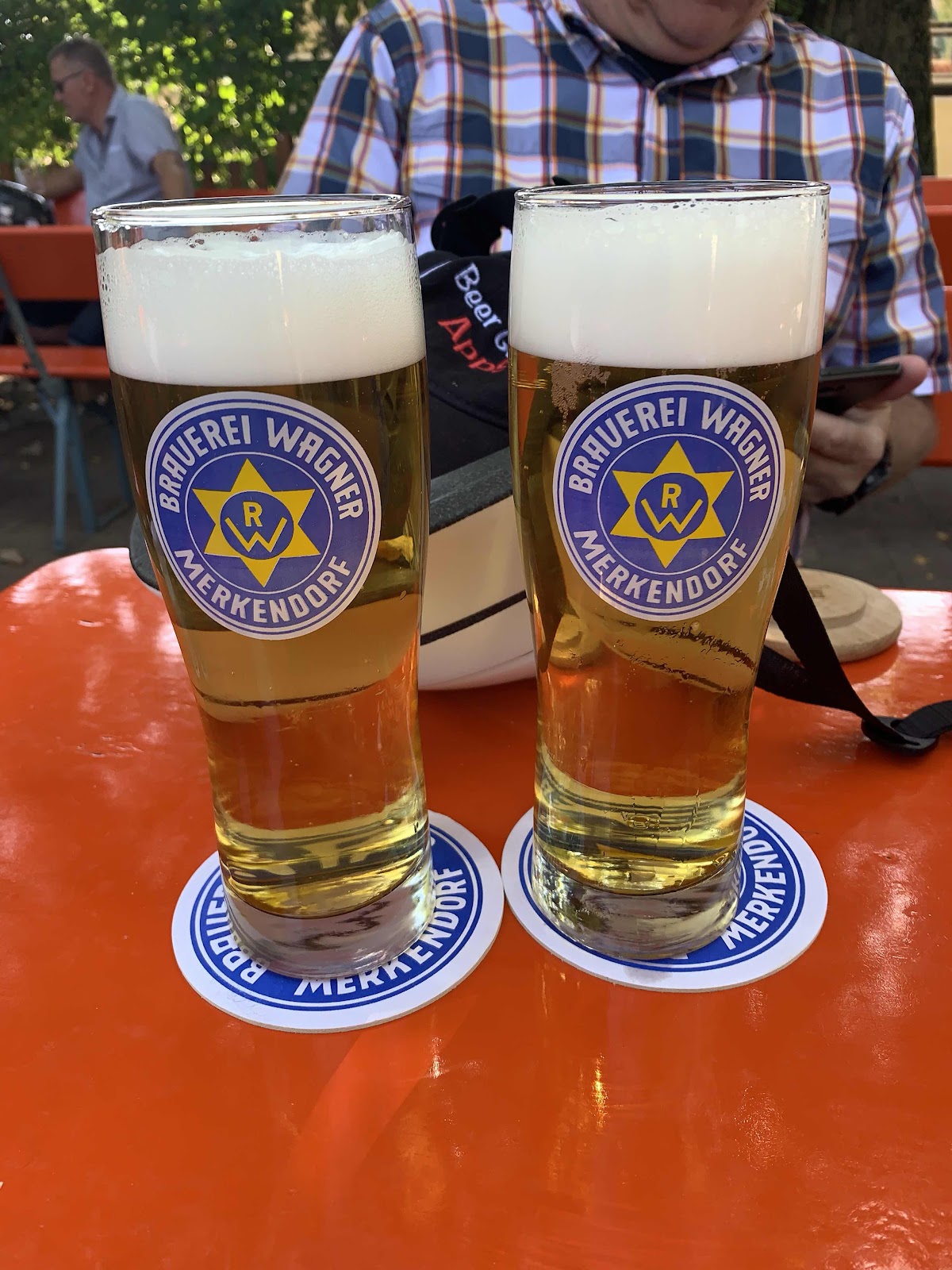 It was time for lunch and they had a special menu, I gather as their Kirchweih was starting the next day. I had half a Gögerla — took a bit of online research to determine it is a chicken prepared a special way. Our table mates told us the chicken can from a nearby farmer — none of the genetically engineered monstrosities you see in the US. It came with Kloß and Wirsing. Bob had sauerbraten with blaukraut and potato salad instead of Kloß. The Gögerla was amazing. If it wasn’t the best chicken I have ate, it is up there with the best (Juan Pollo of Ontario, CA) 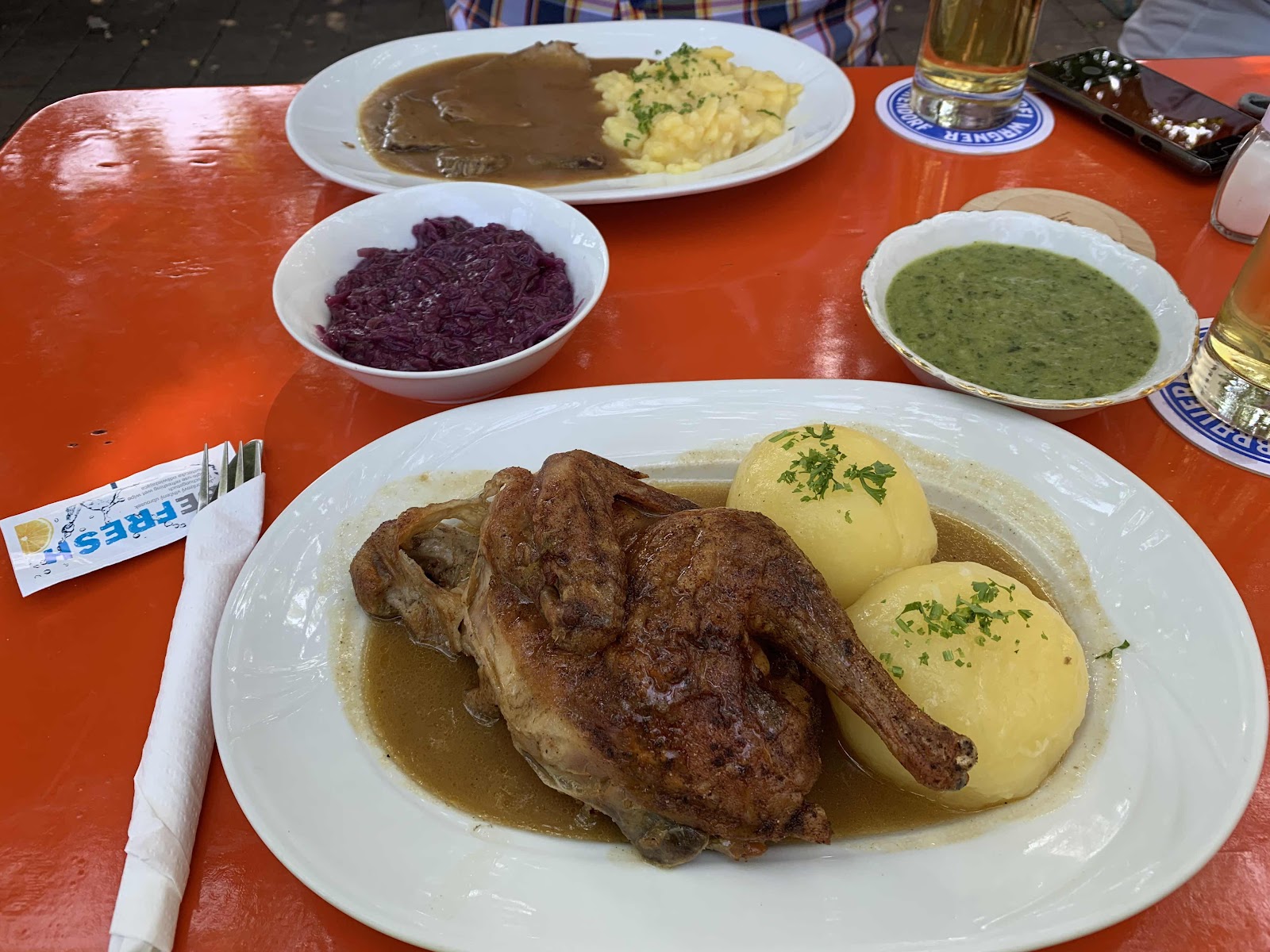 They also had goat sauerbraten. I thought about it but passed. Makes sense as marinating the goat in vinegar for a few days will tenderize the meat.
The other beers they had on draft were their Weizen and Jubiläumsbier (originally brewed for the towns 850th anniversary and is a bit stronger at 5.5%). Bob went with the “Jubi” while I had another Lager, fresh from a new barrel. 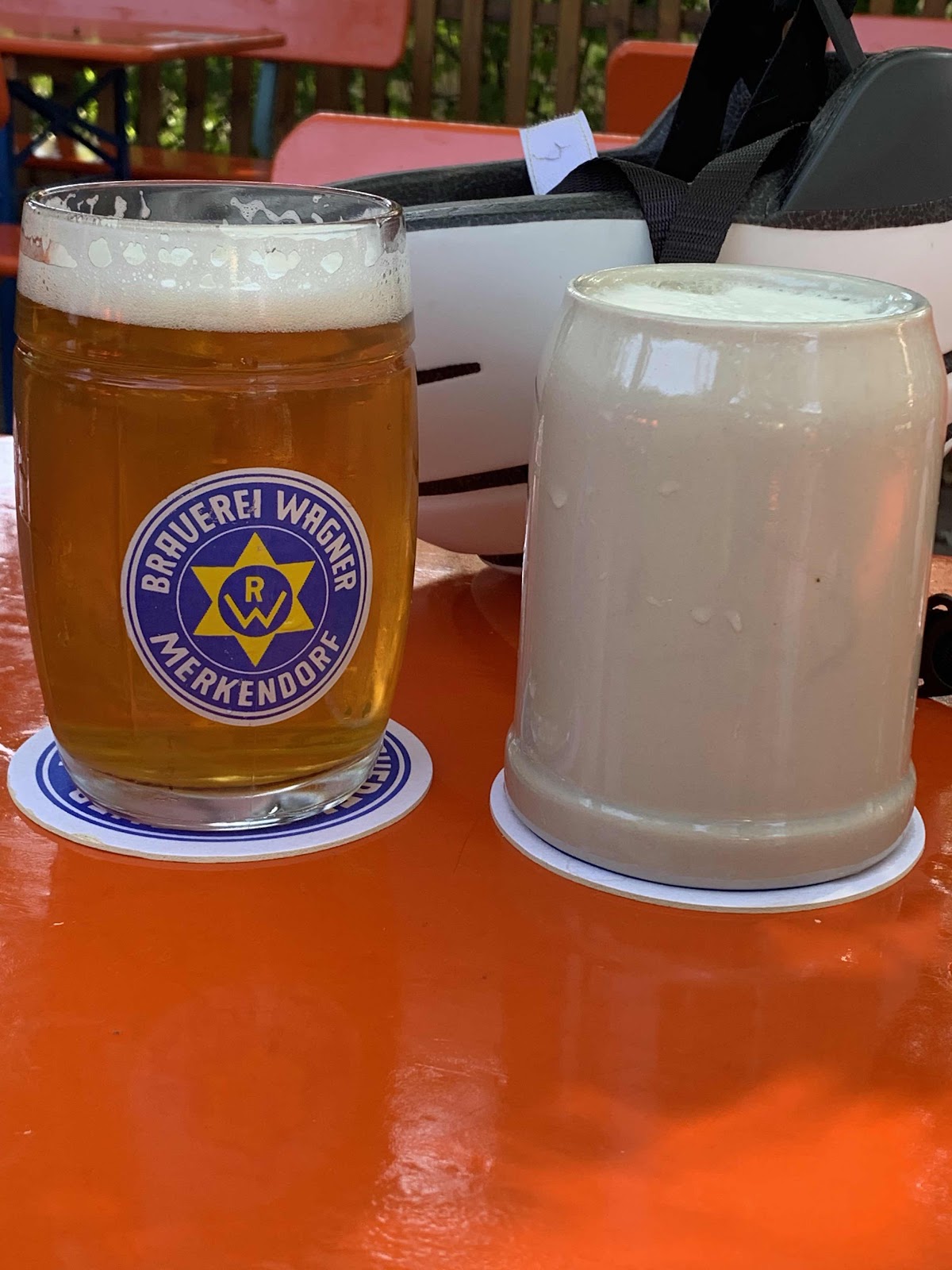 The Jubiläumsbier I find to be a bit on the sweet side but Bob liked it and had another, while I went back the to Pils. 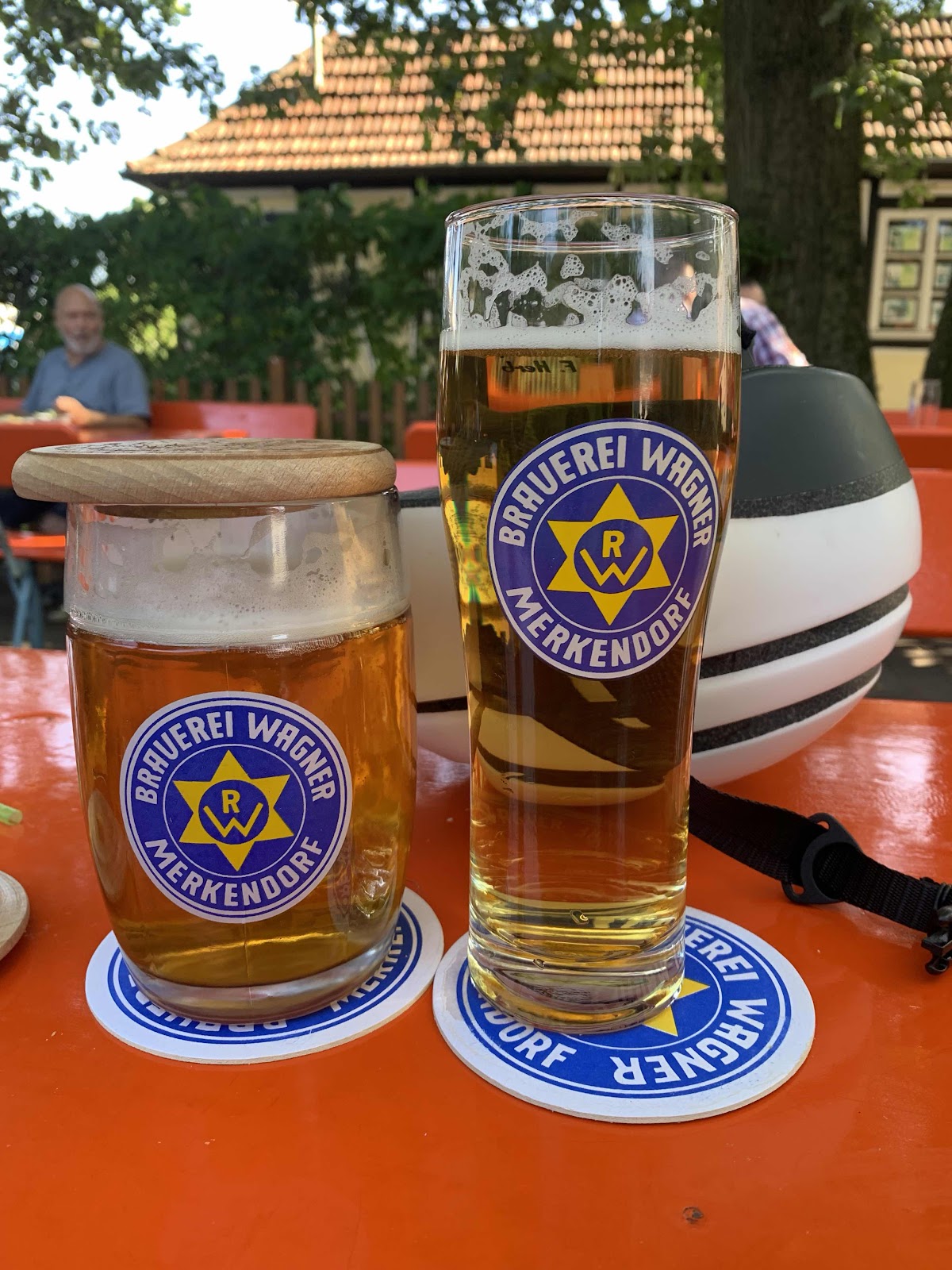 There was another round of Pils (maybe two) when we decided we’d better head back before it got too much. As we passed Brauerei Hummel it was clear their Kirchweih celebration was already underway. We almost stopped to listed to a brass band play, but that might have lead to beer drinking and things would have gotten worse from there (I was going to say “downhill” but down the hill was were we actually wanted to go)
A very mild 23km and 6 really good beers meant it was a great day.