First order of business was assembling the bikes. That was mostly uneventful except my chain got stuck between the crank arm and bottom bracket and we had to break the chain to get it out. Luckily my brother Bob is a decent bike mechanic so we got it fix..
I have a traditional first ride when I am in Bamberg. We headed off down the Rhein-Main-Donal canal to Hirschaid. Along the way was a number of shady benches perfect to stop and make the always need adjustments. 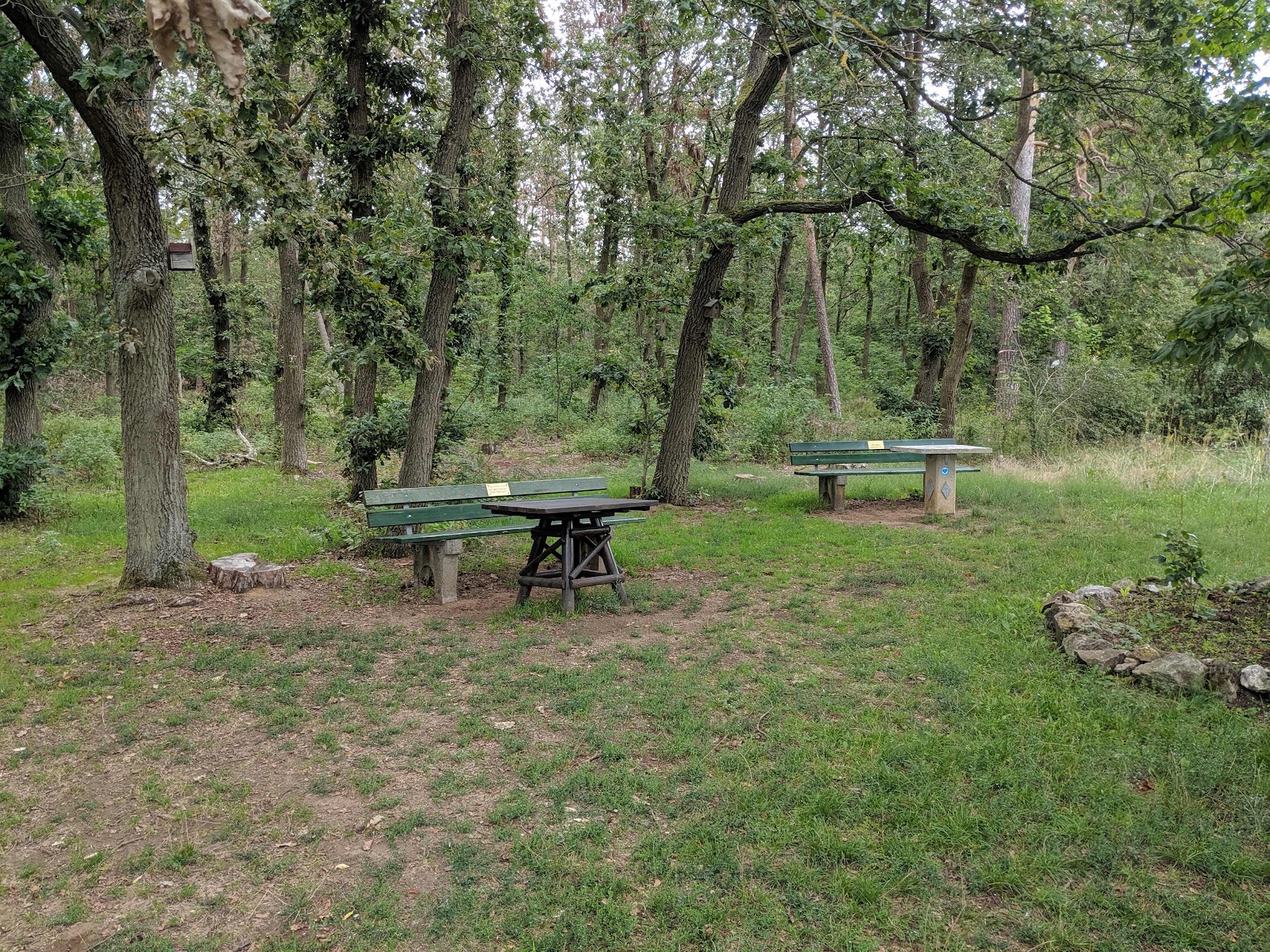 Soon we we at Hirschaid and  Brauerei Kraus, which has a nice beer garden out back. 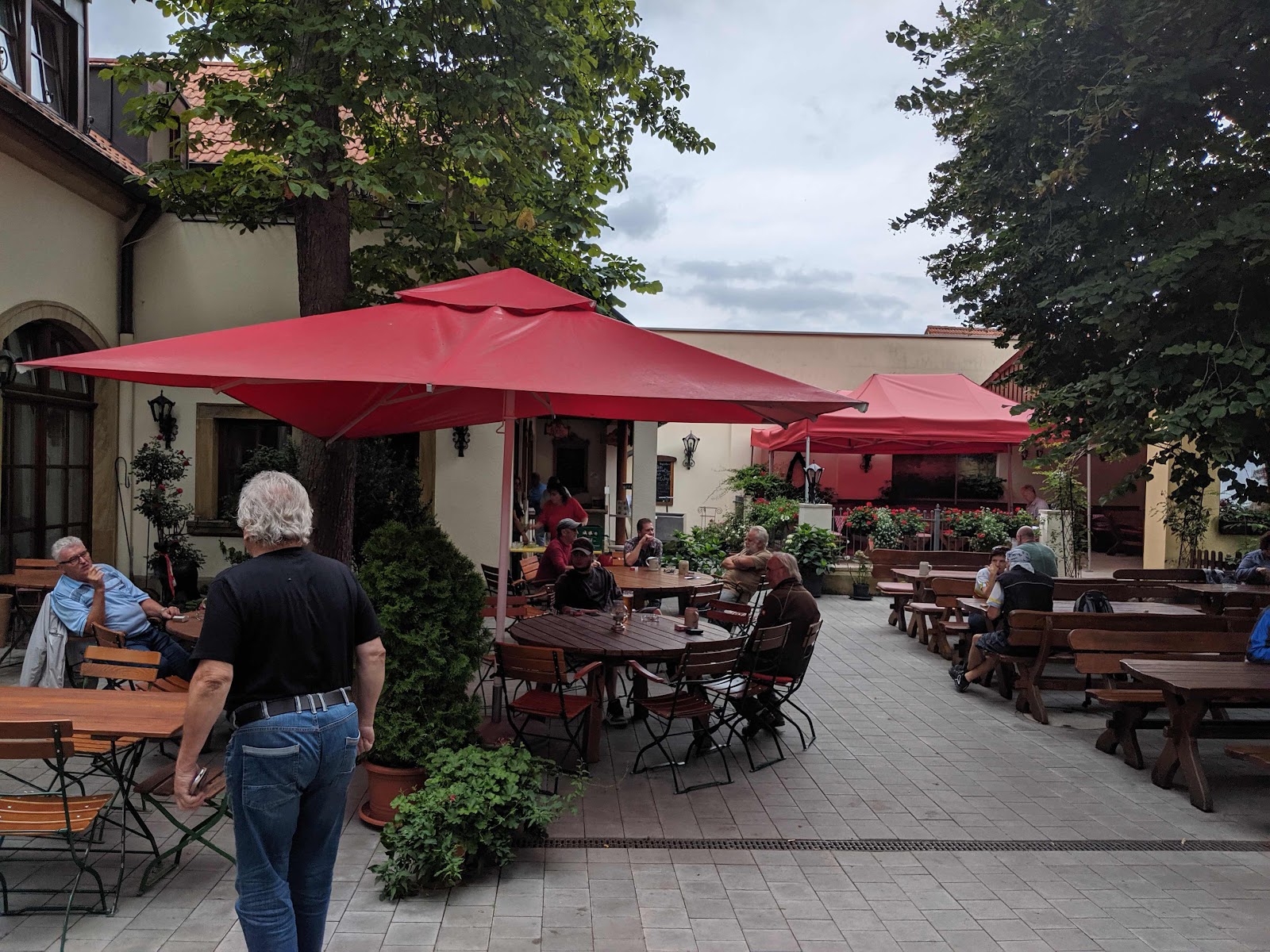 First up was their Lagerbier. Hard to tell much in the krug but it was tasty. In the background you can sort of see the Hirsch-Trunk, their Rauchbier. Also tasty but not in the class of the Bamberg brewed ones. 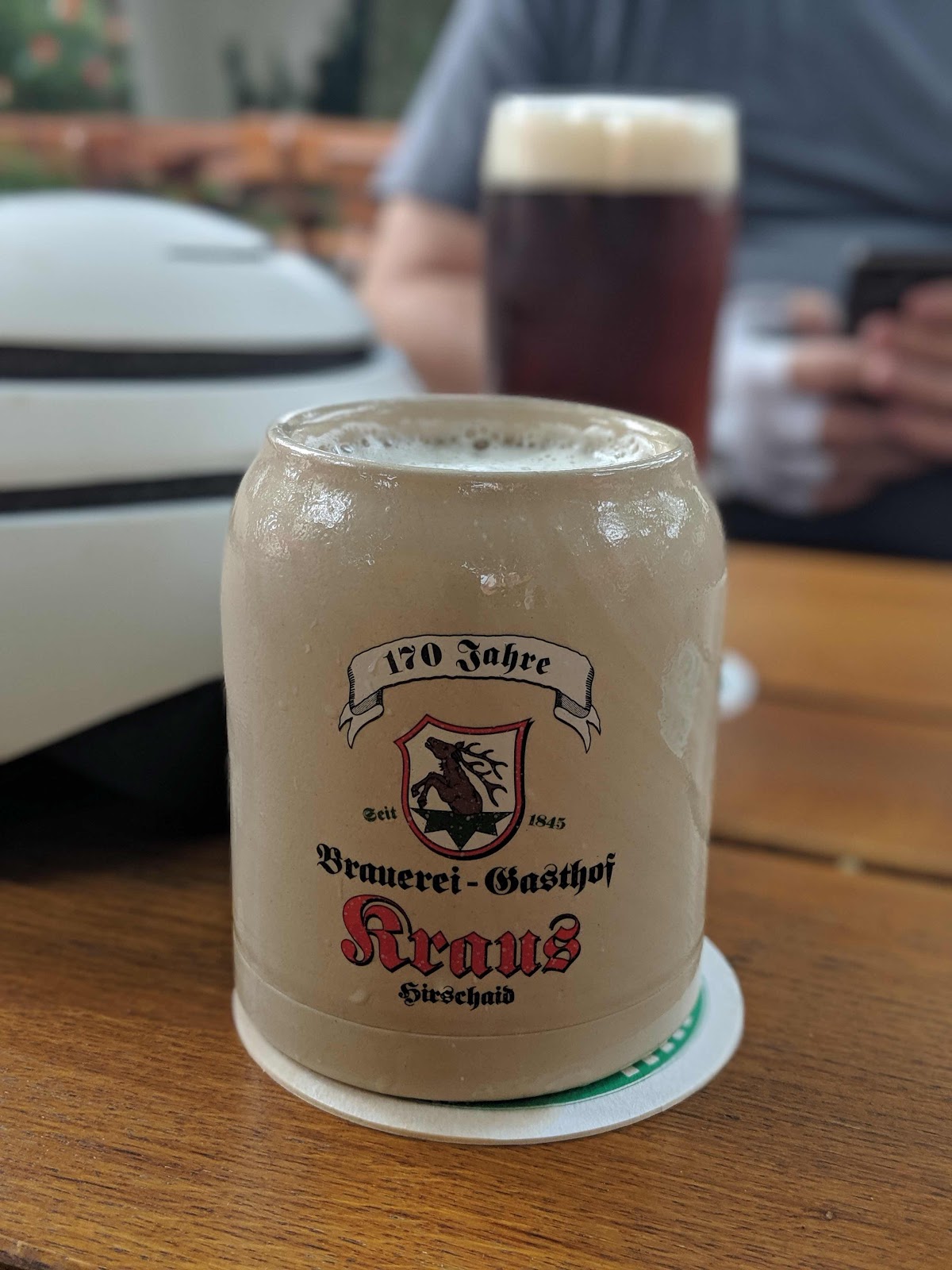 It was nice sitting there we had another, this time their Pils. Again, not earth shattering but a nice tasty beer. 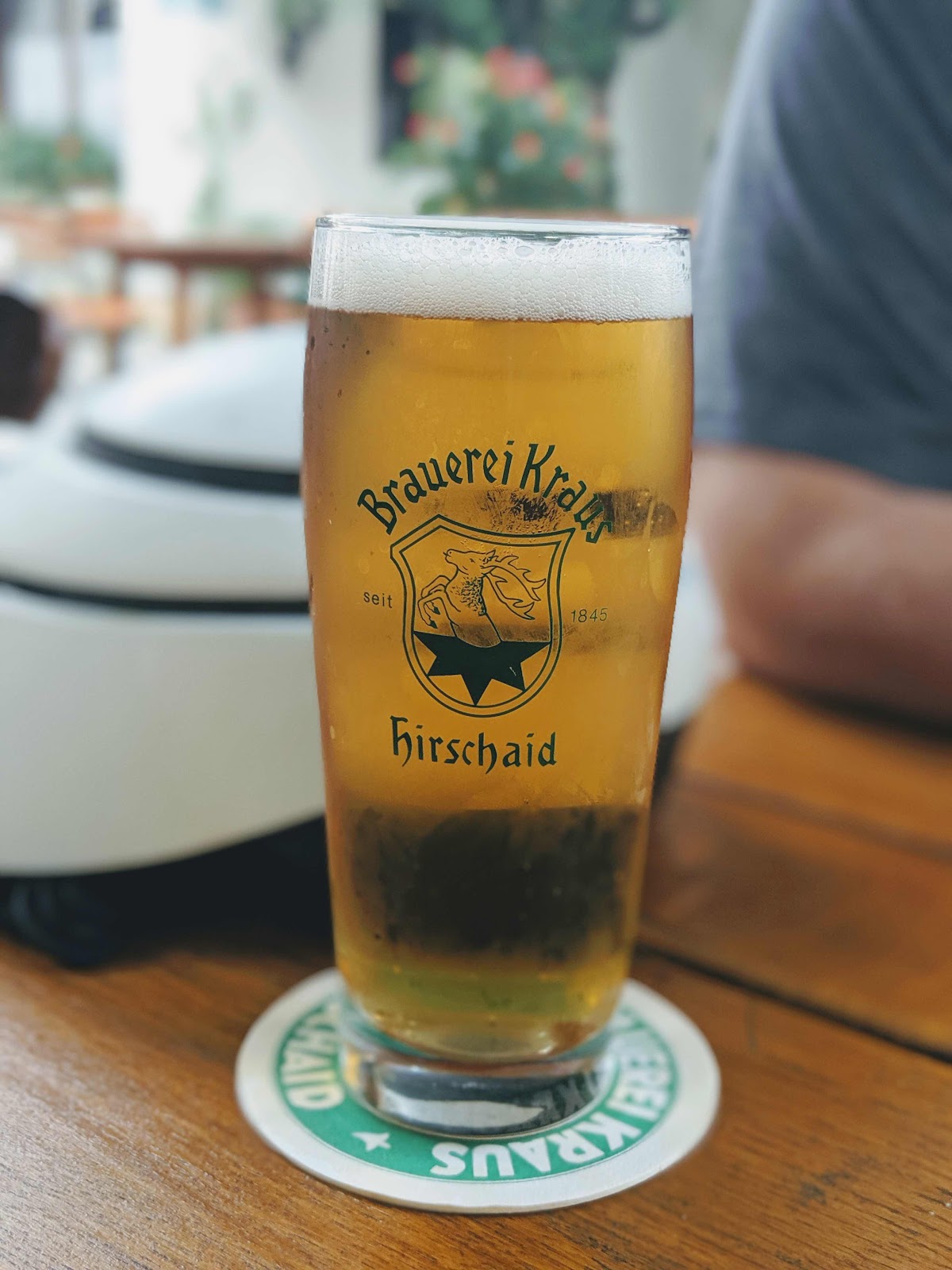 Next stop was the village of Pettstadt. On the way their we cross by the locks over the canal. Nothing was locking thru so I took a picture of the canal headed back to Bamberg. 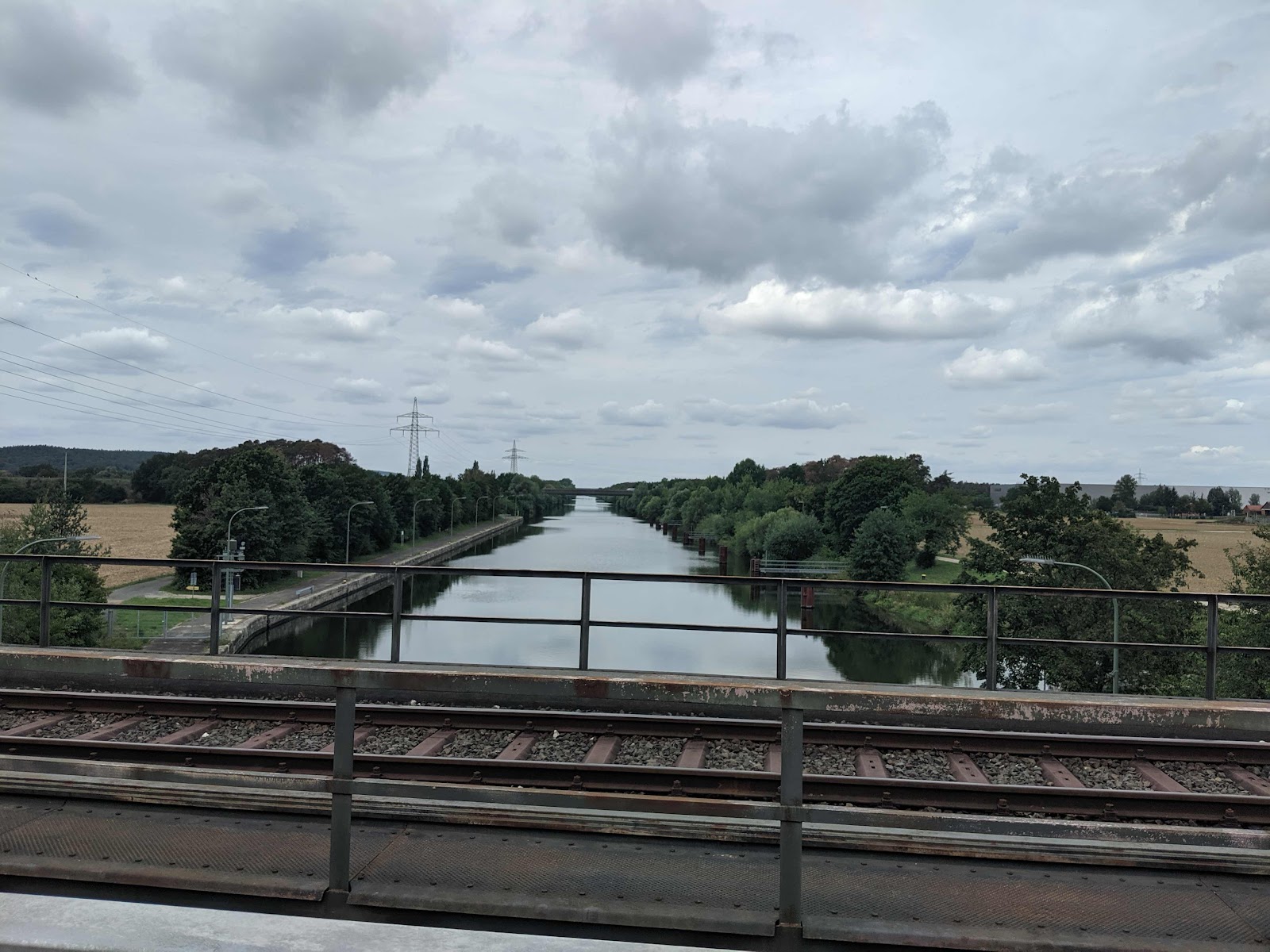 The bike path has to cross the Regnitz river itself and you do so by ferry. Costs €1 and is totally non-motorized, powered by the current and a little bit of muscle power by the ferryman. The experience is well worth the cost. 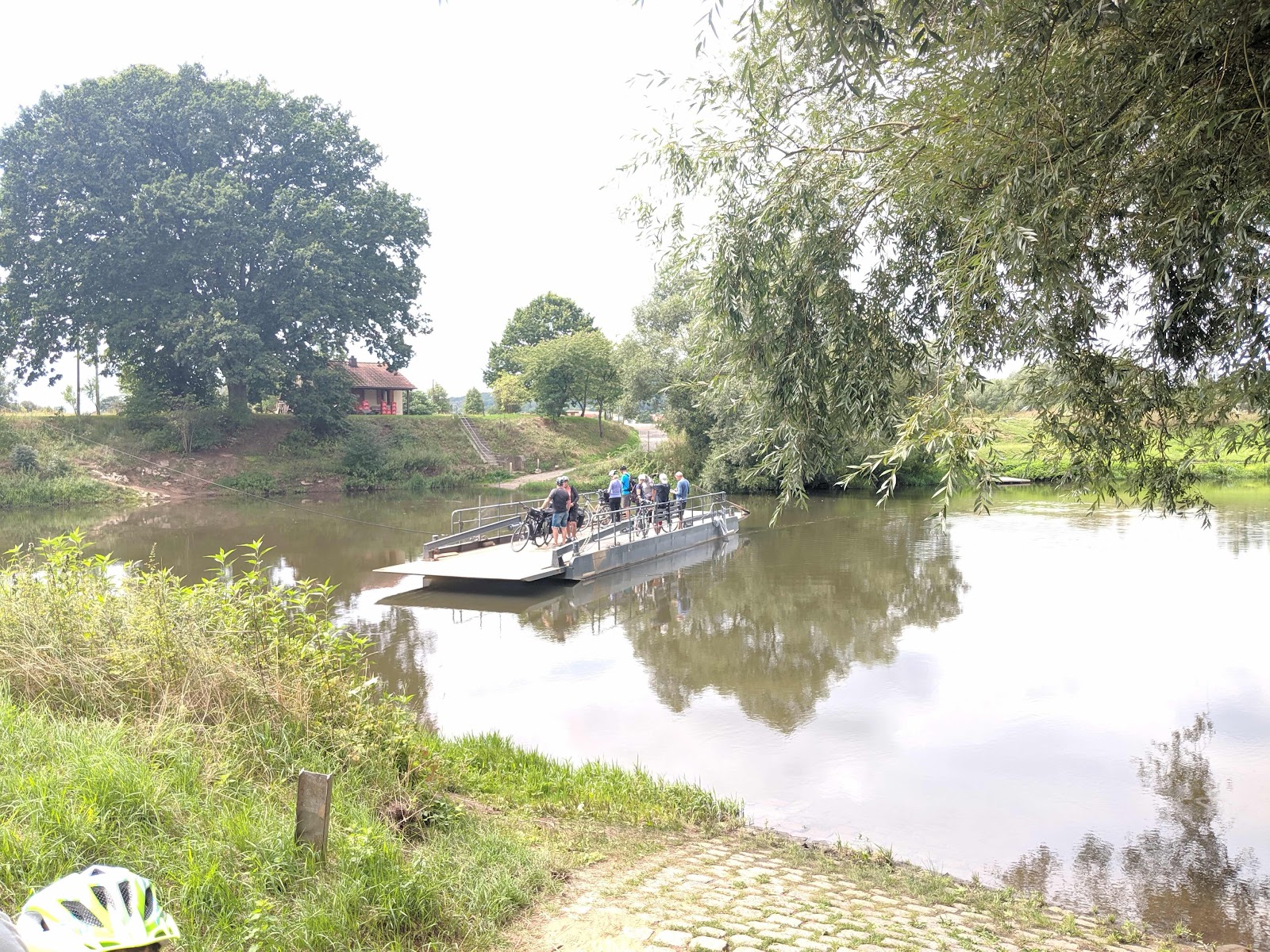 Soon we were at Schrauder Keller in Pettstadt. This rustic Keller serves Löwenbräu Buttenheim Lagerbier by gravity from a wooden barrel. A wonderful beer. We ended up having three because the beer was so nice and the setting so relaxing. 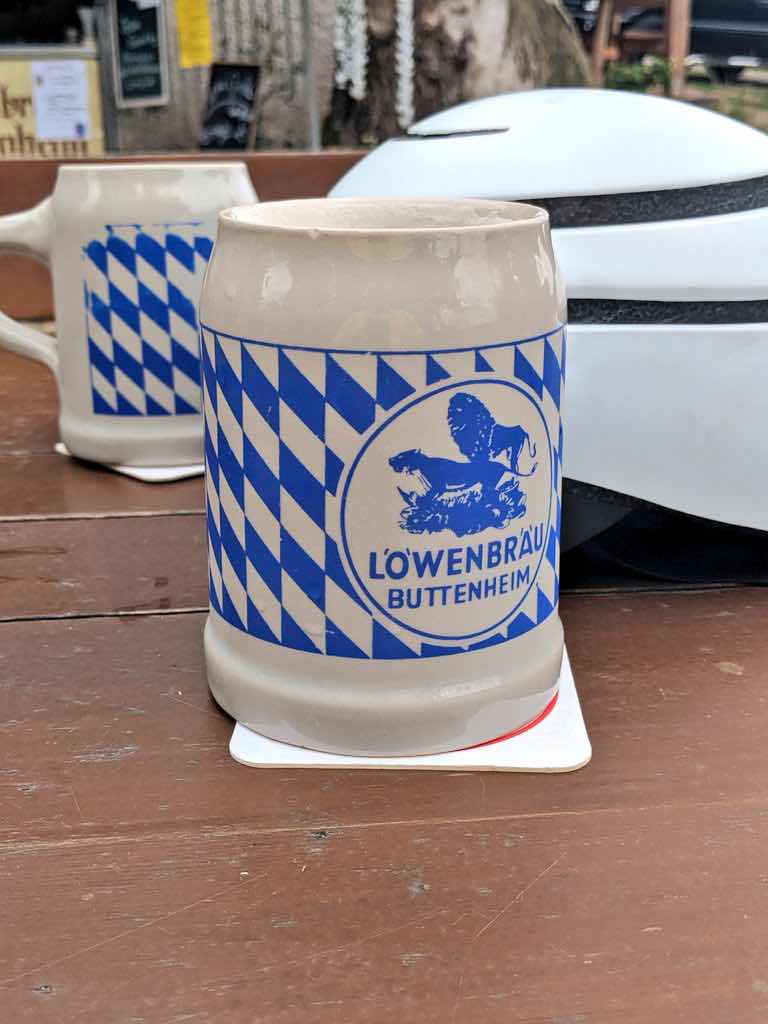 The German language makes new words by sticking together old ones, as many as needed. This compound noun was built from four. It is left as an exercise for the reader to do the translations... 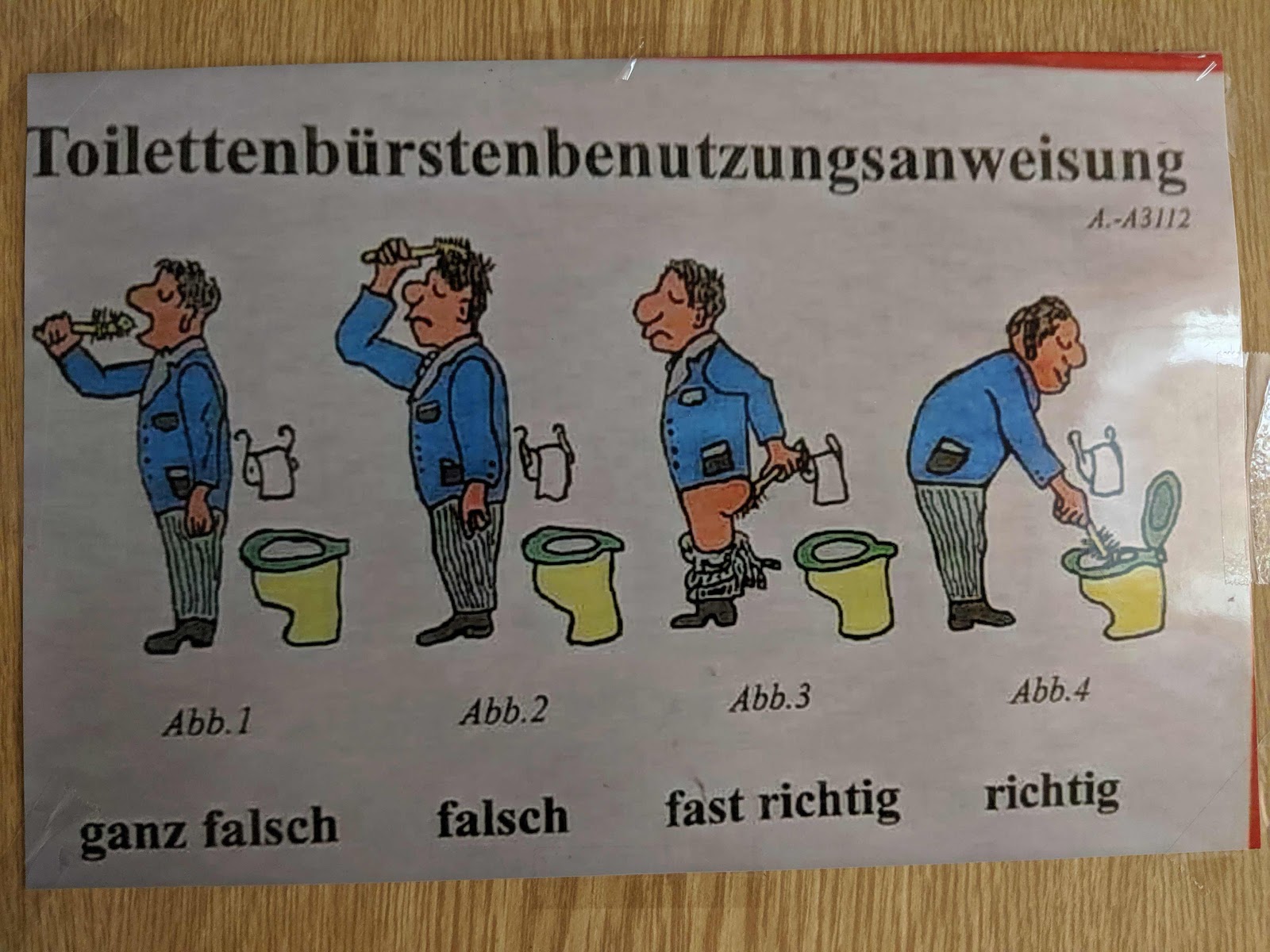 We both could have spent the rest of the day there but there were bikes to be ridden and beers to be drunk. We headed back for Bamberg and just north of the village of Bug we stopped to admire the view where the Regnitz splits into two arms (one being the canal at this point) 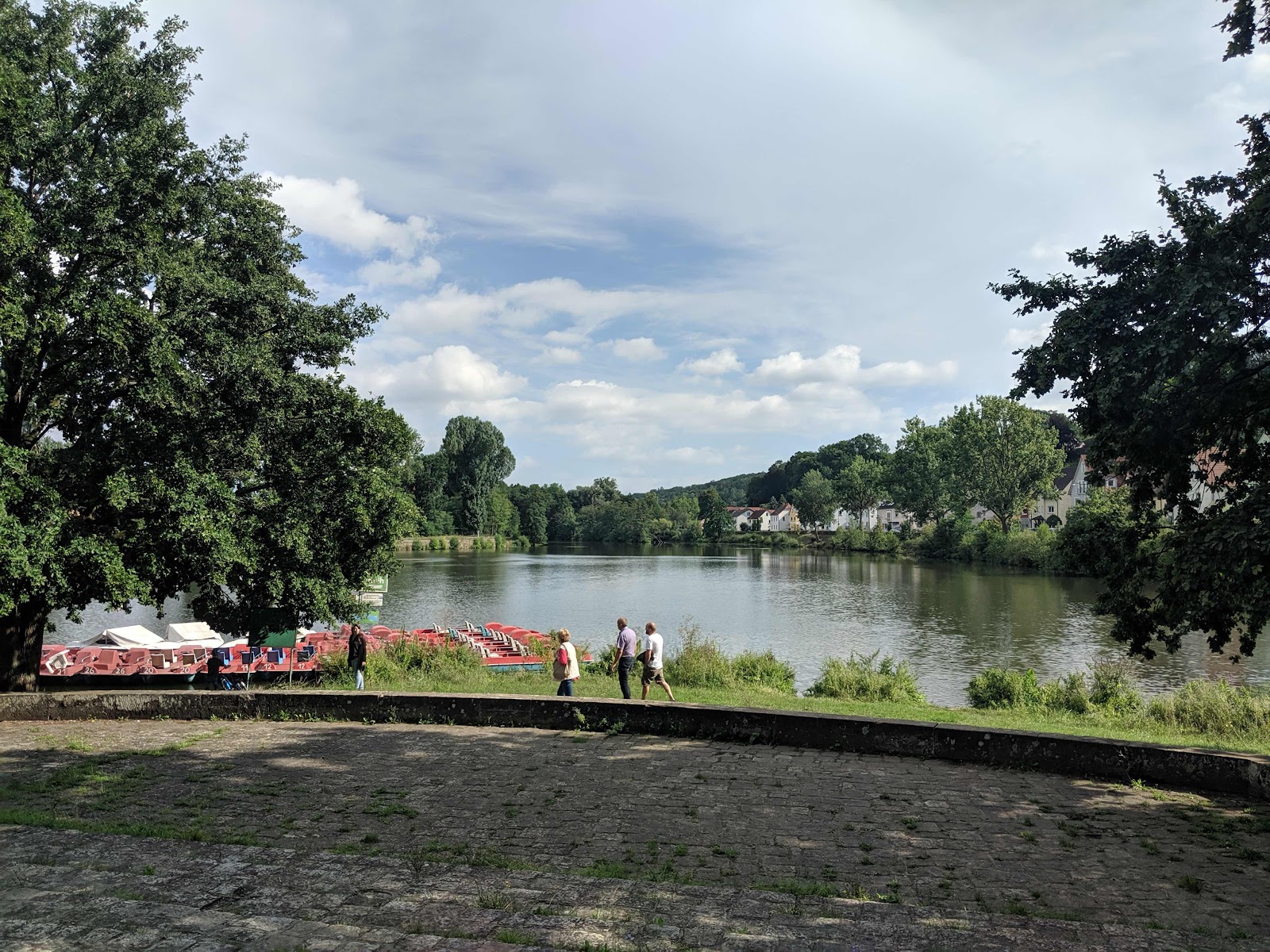 A short while later we arrived at the Bootshaus, a riverside cafe next to Bamberg’s rowing club. They carry beer from Brauerei Kundmüller in nearby Weiher. We had the Kellerbier and the Pils. Both were nice. 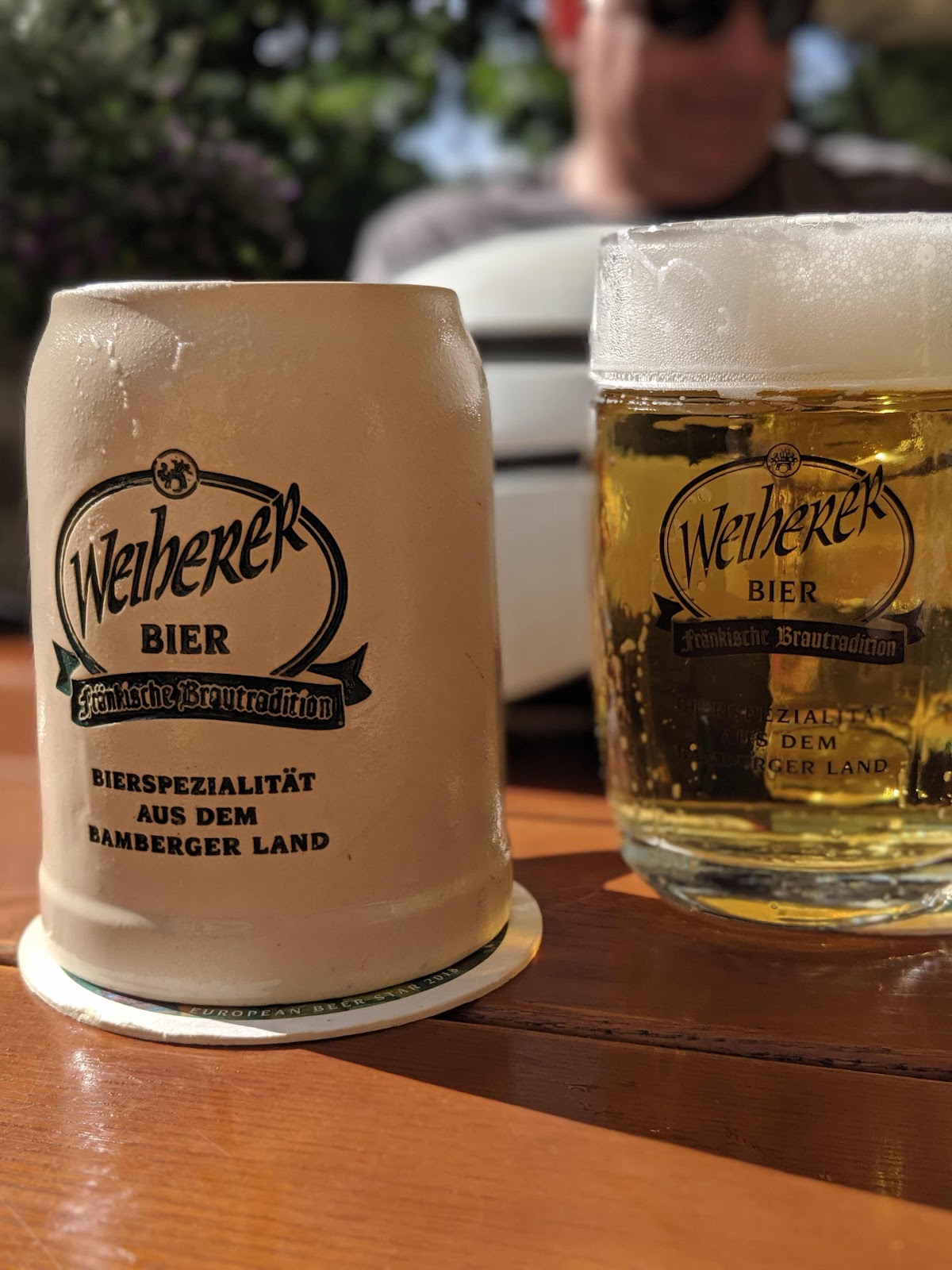 A kilometer or so from Bootshaus is Klosterbräu. As we passed we saw their riverside terrace was open (in all my visits to Bamberg this is only the second time I’ve seen it open). They were recently acquired by the larger brewery Kaiserdom and their beers have been much improved since. We had the Kellerbier and their Rauchbier. 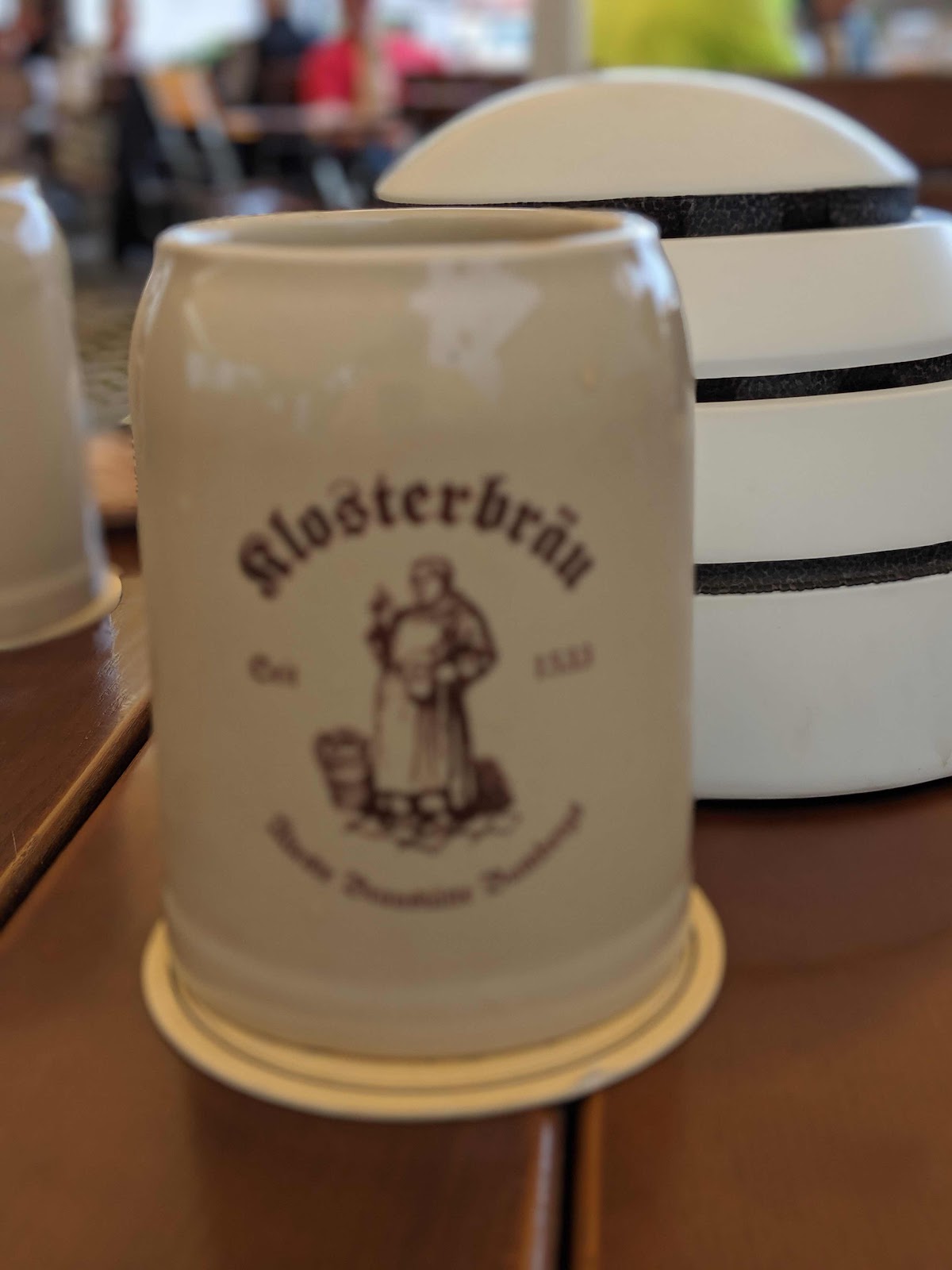 Sorry for the blurry photo, the phone focused on my helmet and I didn’t notice. The Rauchbier was really good — good enough to be mentioned along with Schlenkerla and Spezial (not as good but better than any I’ve had from surrounding villages).  It was dinner time so I had a schnitzel as well. 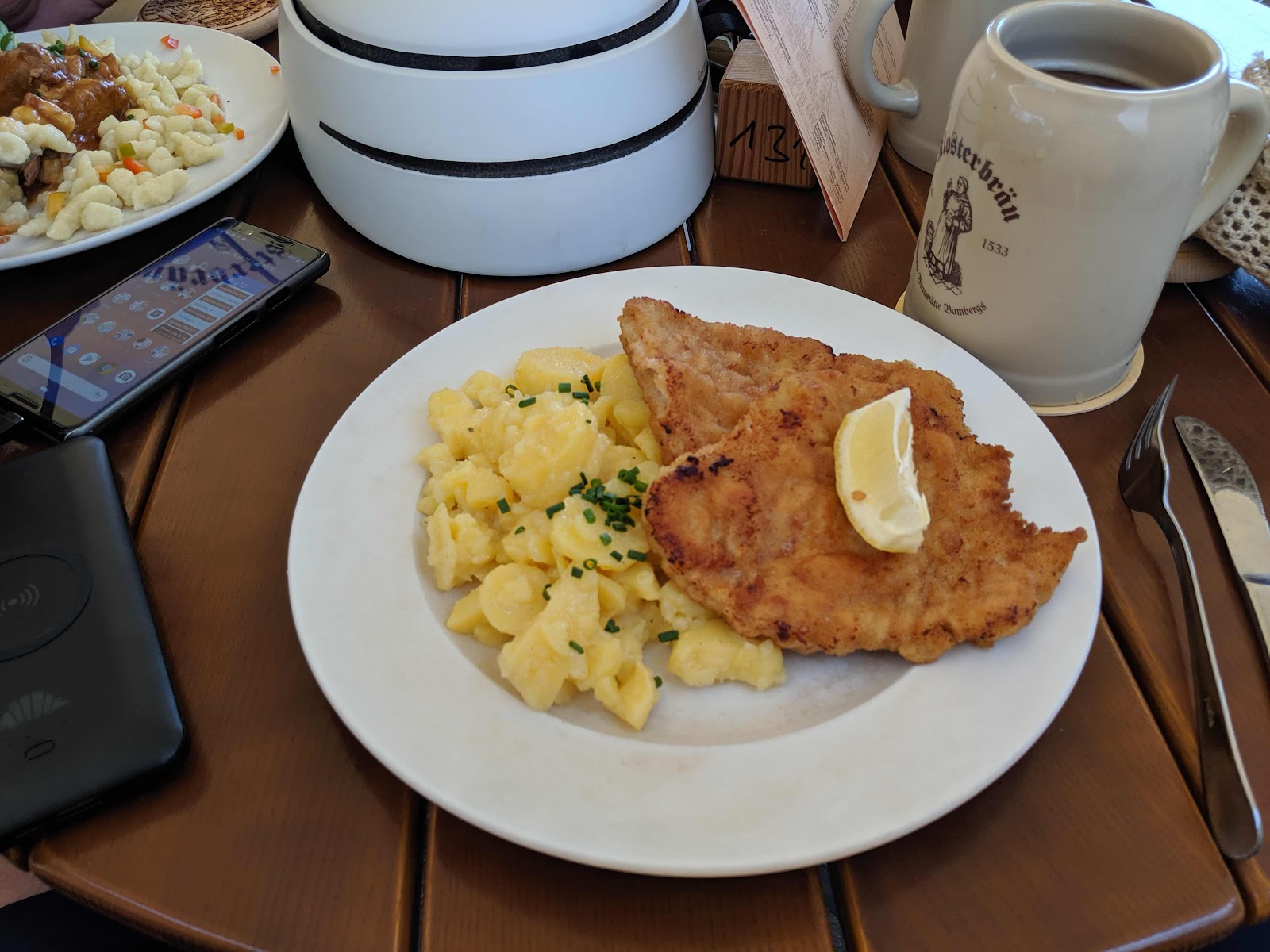 Our journey back to the apartment took us by Schlenkerla so we stopped in. It would have been rude not to. We started with their summer speciality, Krausen. I wasn’t a big fan of this beer when it first came out but they have dialed it in and is very good. Not as smokey as the standard Märzen but enough to show its Schlenkerla heritage. 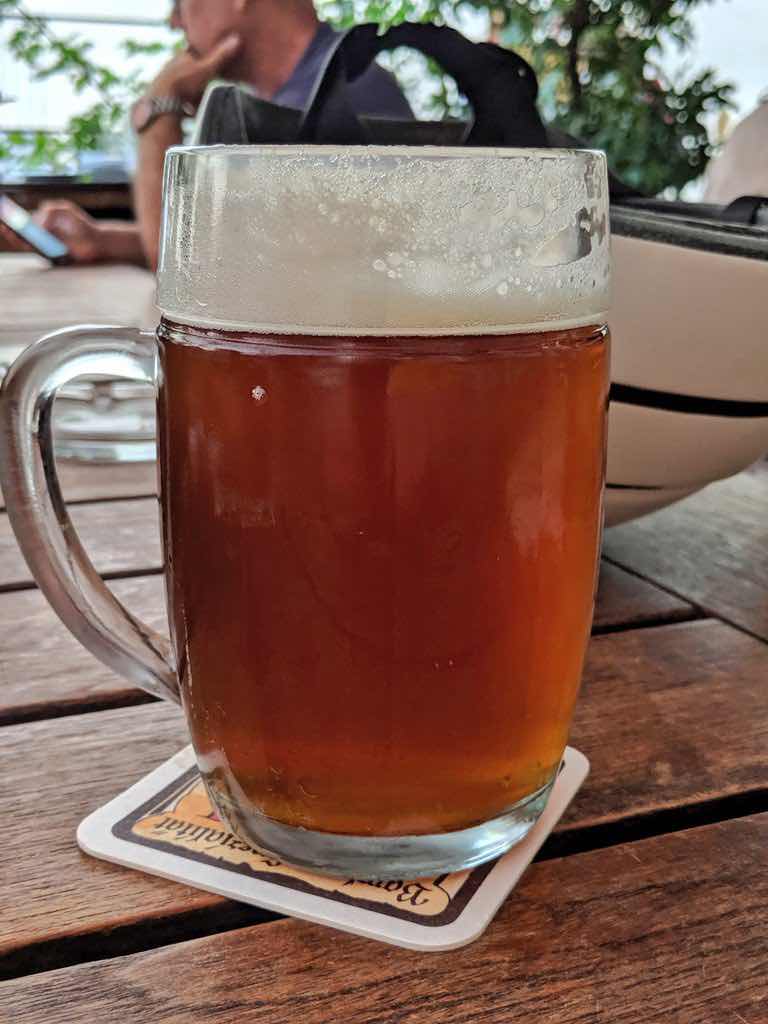 We followed that up with a Märzen. 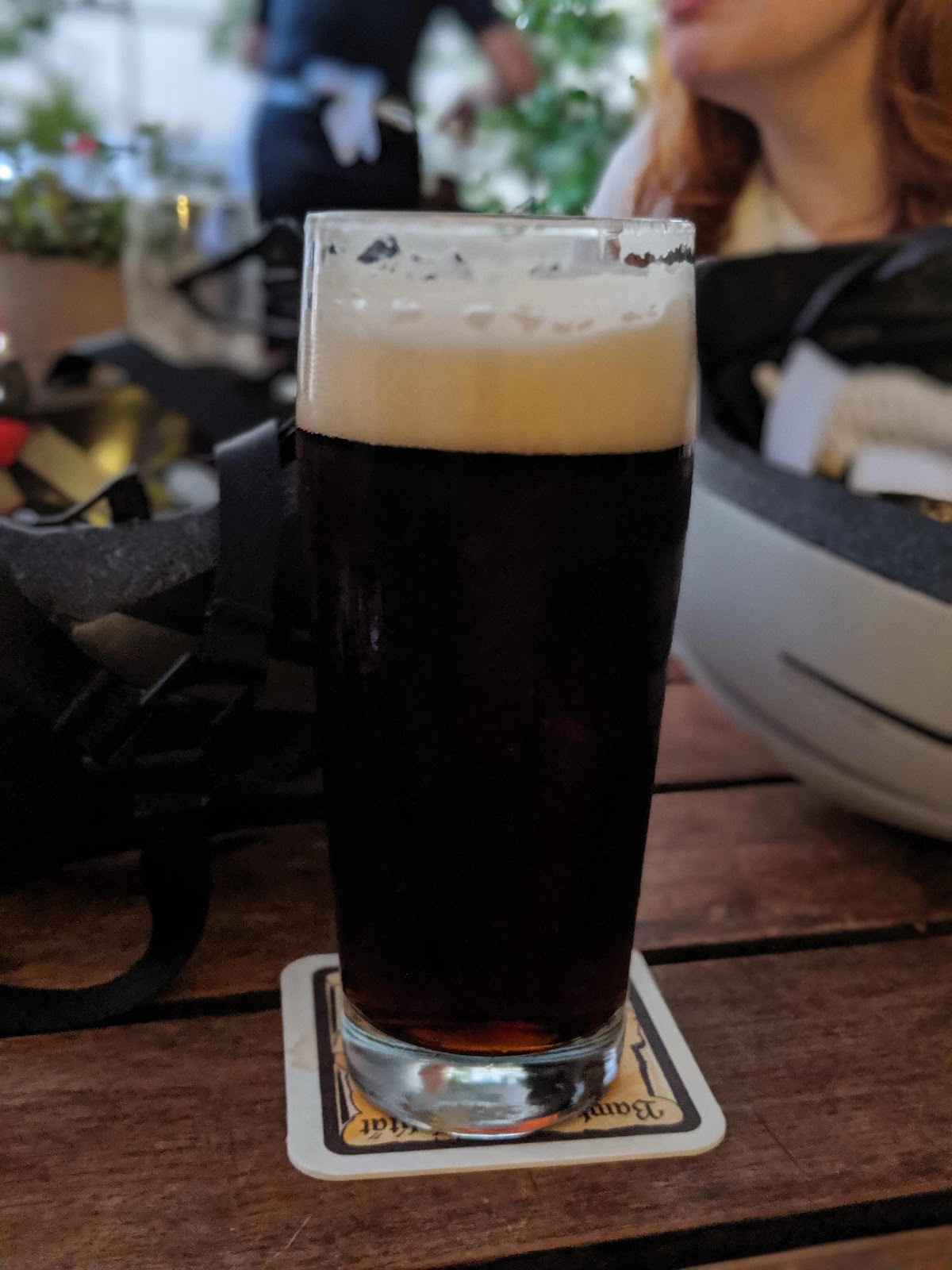