Bob wanted to try some of the Binkert beers. On Sunday they don’t open until 3pm so we decided to ride to Rattelsdorf to check out a place called Obere Mühle that I had ride by many times but never been to as it only open Fri thru Sun in the warmer months and is only open early on Sunday. Many people had recommended it so why not — it was only a little bit farther than Binkert in Breitengüßbach. It was also going to be a hot and humid day and I didn’t want to overdo things.
Having learned my lessons in the past I called first. The phone rang for a long time and then was just answered with a “Hallo” — not a good sign. When I asked if they were open today I got a string of rapid dialect that sounded a bit sad then they hung up. It reminded me a bit of a story I heard about somebody calling Fässla to inquire about rooms and first asked “Does anybody there speak English.” The reply was “No” and they hung up. To the point.
Anyway from that sad tone I was guessing they were not open but we rode to Rattlelsdorf anyway. Obere Mühle is at the bottom of a steep-ish hill so I exercised  my prerogative as elder brother to send Bob and his younger knees down to check. He came back saying nothing looked open.
Plan B was ride to Ebing about 2km away to visit Brauerei Schwanen. 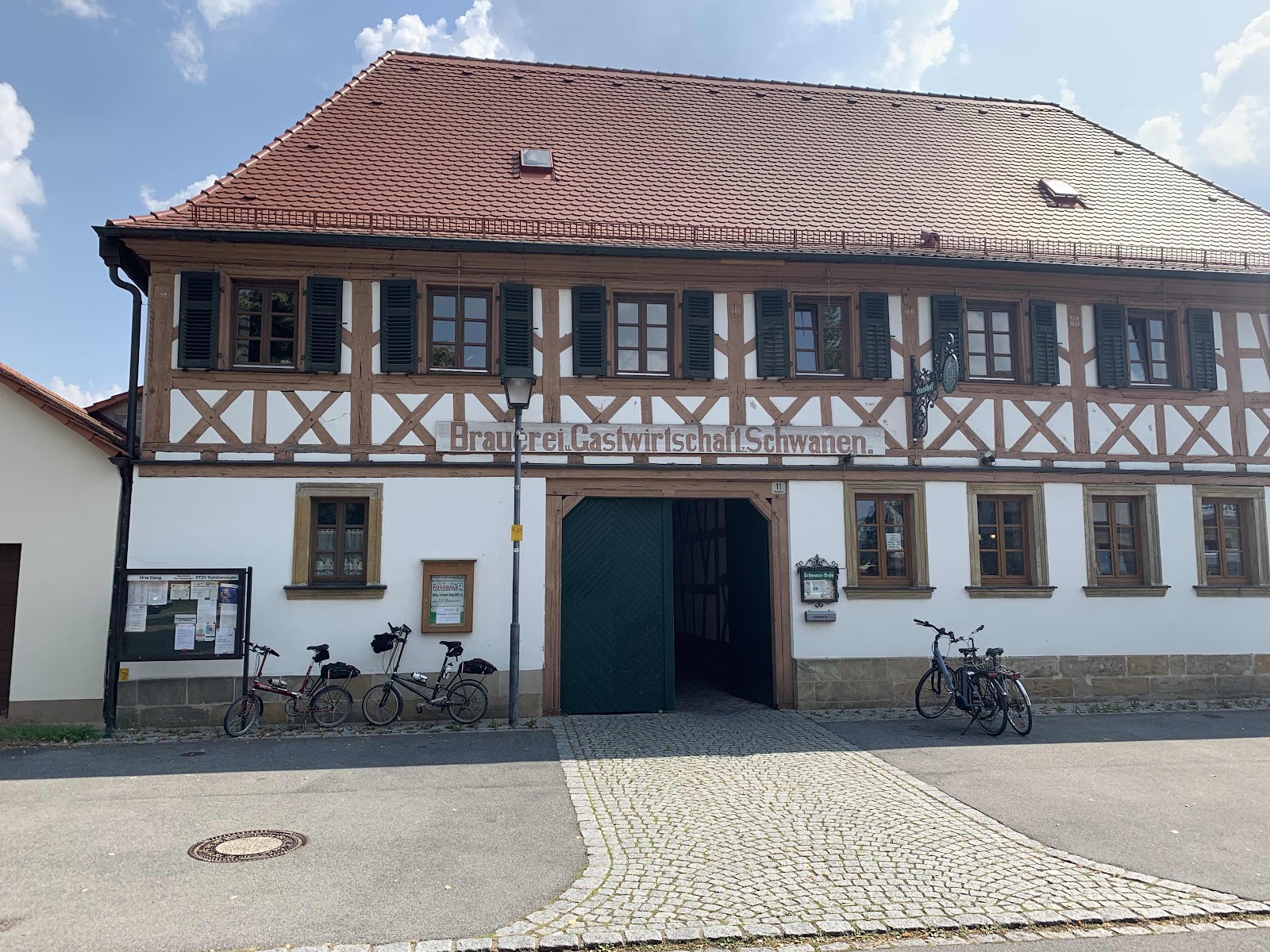 I live hanging lights with the brewery logos over the bar. Problem is they make hard pictures. 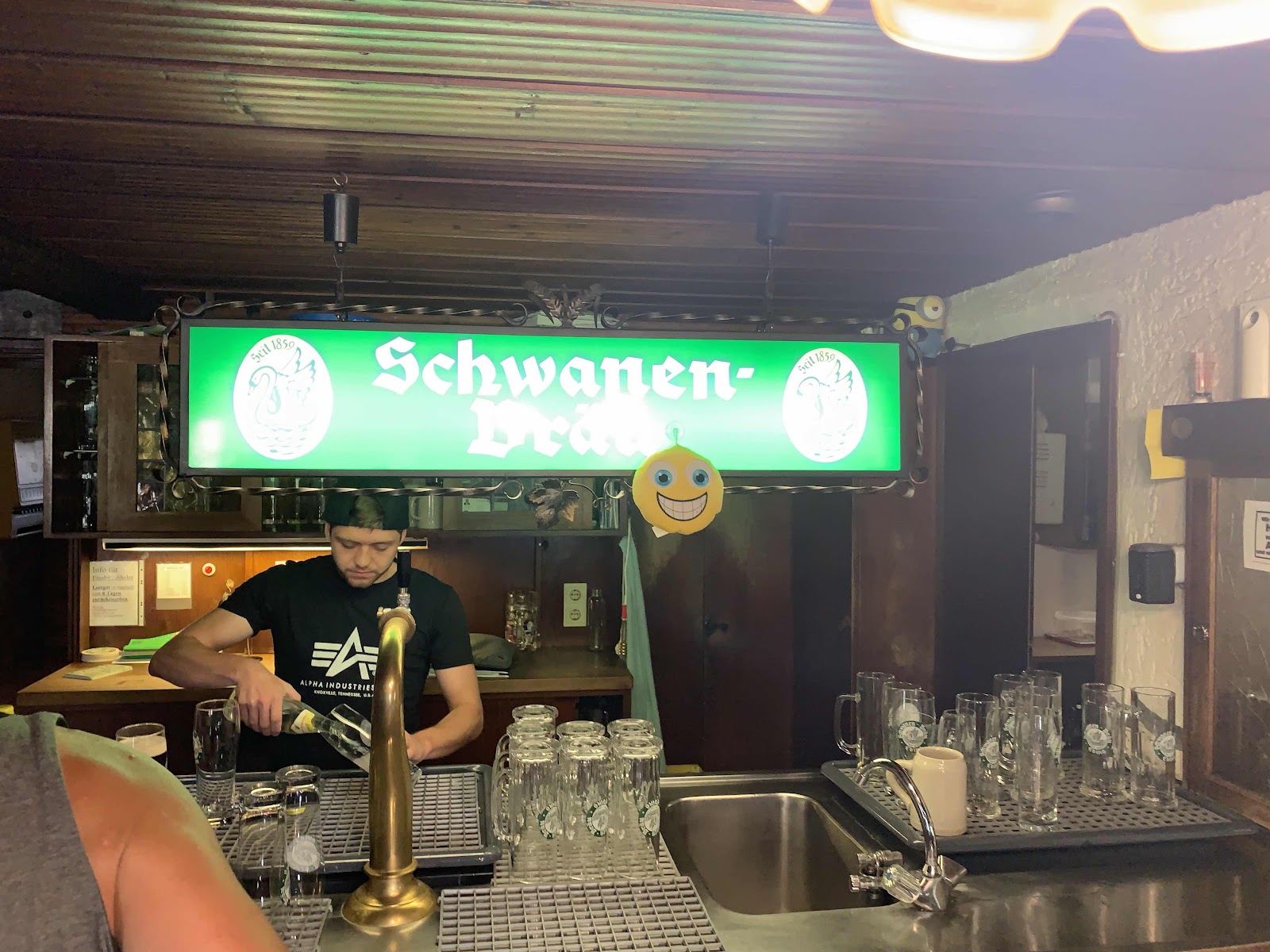 The kitchen had already closed for lunch and they didn’t have any cold snacks, so we went straight to the beer. It is not my favorite Franconian Dunkel but it hit the spot. 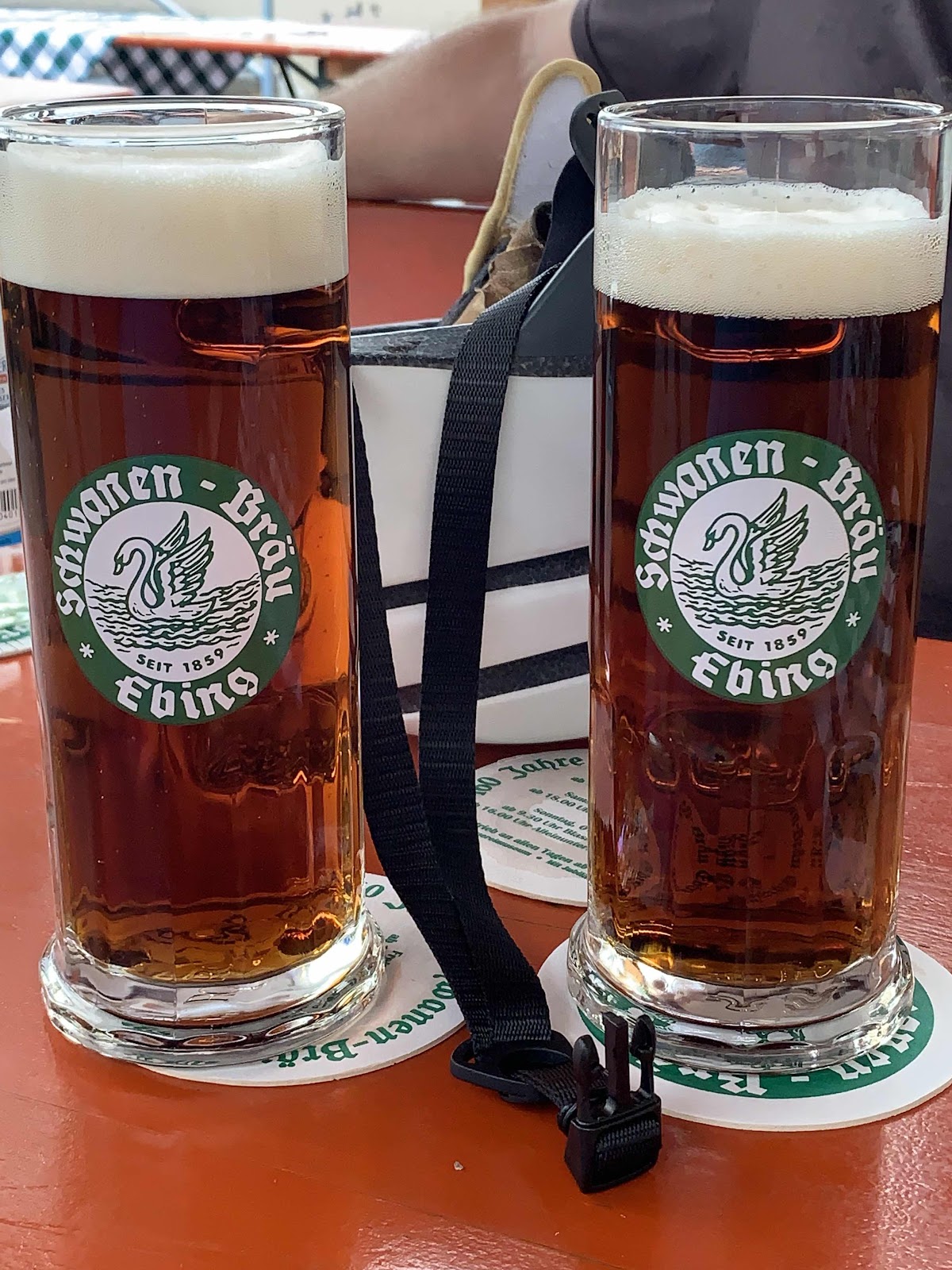 Google maps suggested a route that took us past the train station for Ebing (which is a couple km out of town). The last time I was at the station it was basically a 100 year old shack on a lonely platform. Deutsche Bahn has been upgrading this line to take the high speed ICE trains (300+ kph) and I guess they redid the station as well as it was very modern. At first we thought we’d have to carry our bikes done some stairs but they had built a bike ramp so we rode underneath the tracks and back on the bike path. Google Maps said “mostly flat” and they were wrong but this time it was only one long hill that wasn’t too bad.
On the ride up we had passed by a couple who were doing loaded touring. We passed each other a couple of times as one of us stopped for something. Anyway, just about thru Breitengüßbach we saw them by the side of the bike path, his bike upside down and he was pumping madly with a tiny hand pump. We stopped and I brought over my Lezyne Micro Drive pump (highly recommend) and said try this. His first words “Nice pump!” In a few minutes he had the tire inflated, we said our good-byes (and I made sure I had my pump!) and rode off. 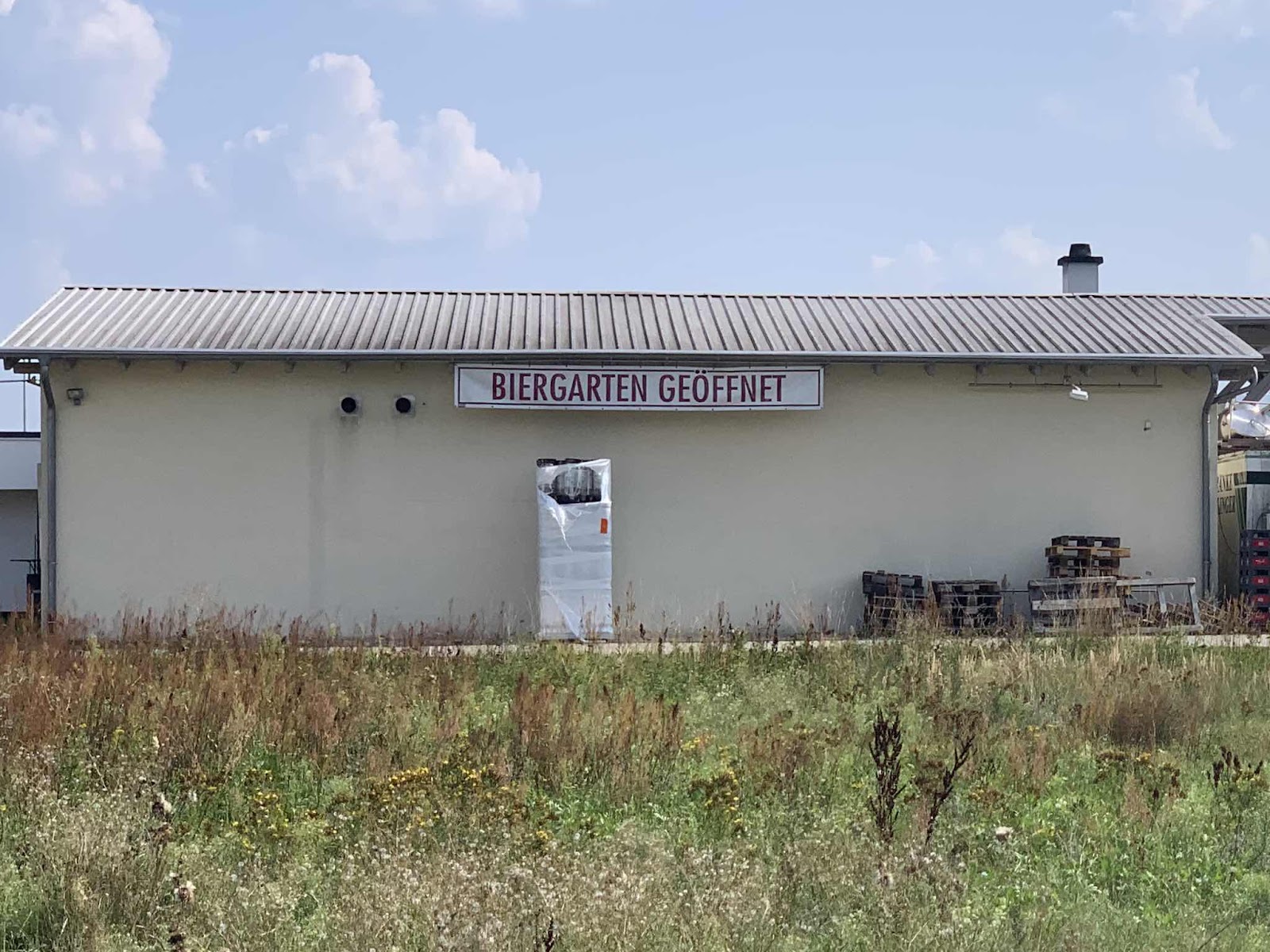 Around the corner we came to Binkert almost exactly at 3pm and I saw that wonderful sign. They lied. The place was locked up tighter than a drum. There were about a half dozen people there all as frustrated as we were. Oh well.
A short ride away is Kemmern and Brauerei Wagner. Normally, they are only open early on Sunday (9am-noon) but I new this weekend was their Kirchweih (parish festival) so we figured we could get some beer and food. We could. Started of with the Pils, which is my favorite of their beers. 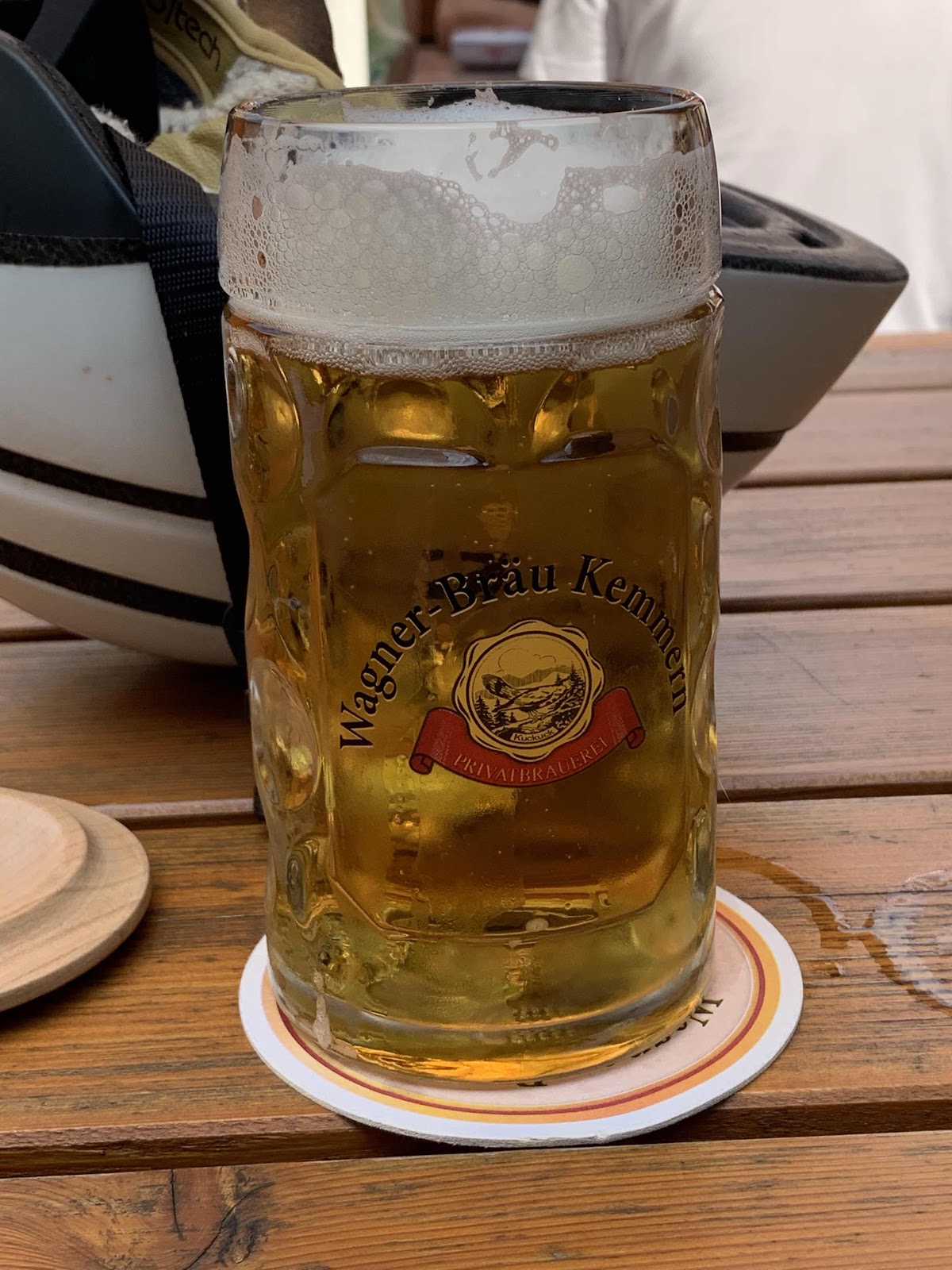 Since we hadn’t had any lunch, we decide to eat. I ordered the Jägerschnitzel, which usually comes with a mushroom cream sauce but this one was mushrooms and peppers in a spicy gravy. Even paprika on the fries. More of a Zigeunerschnitzel but really good. 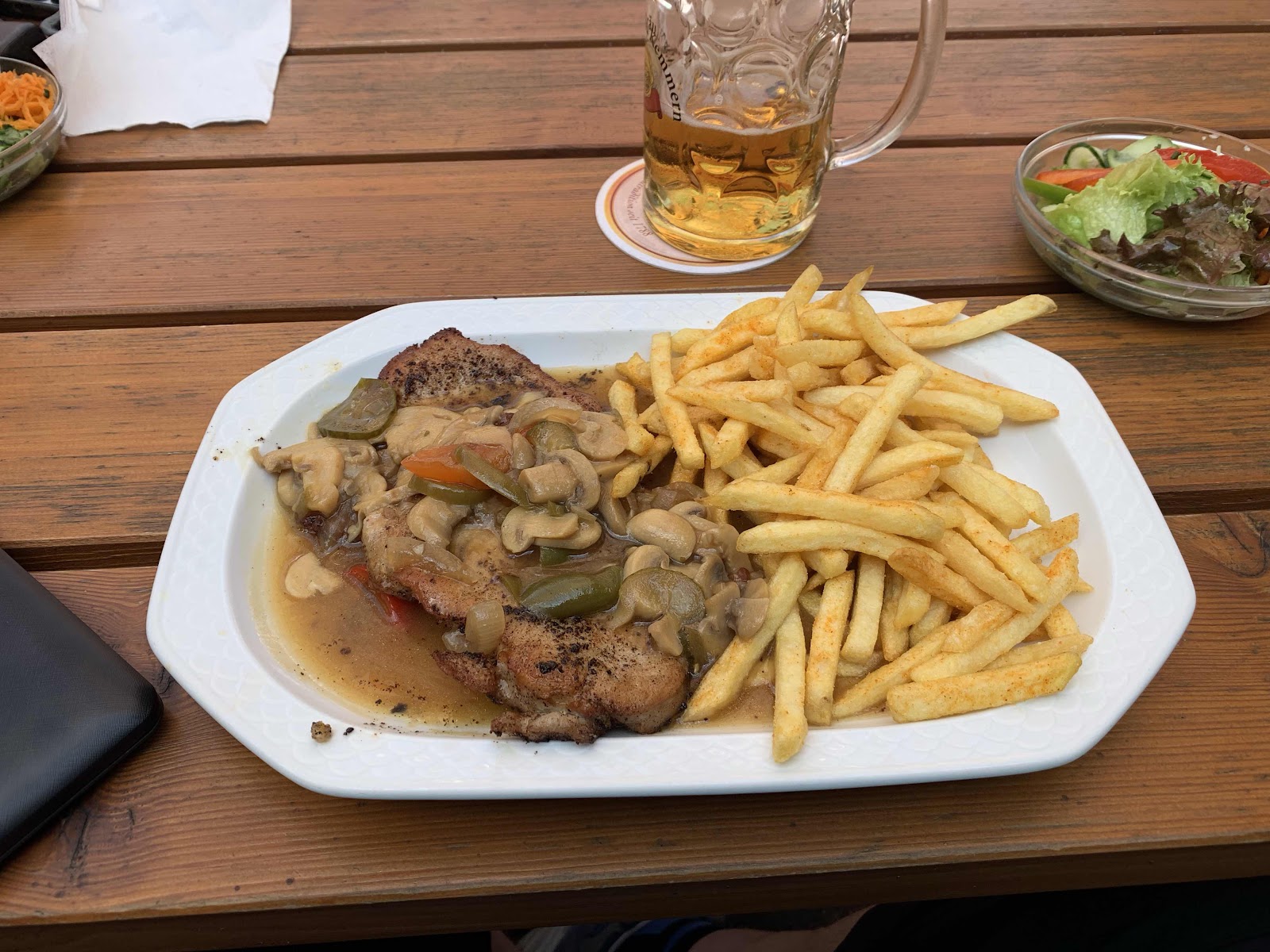 I decide to try their Lager and it was much darker than I remembered and I still like the Pils better. 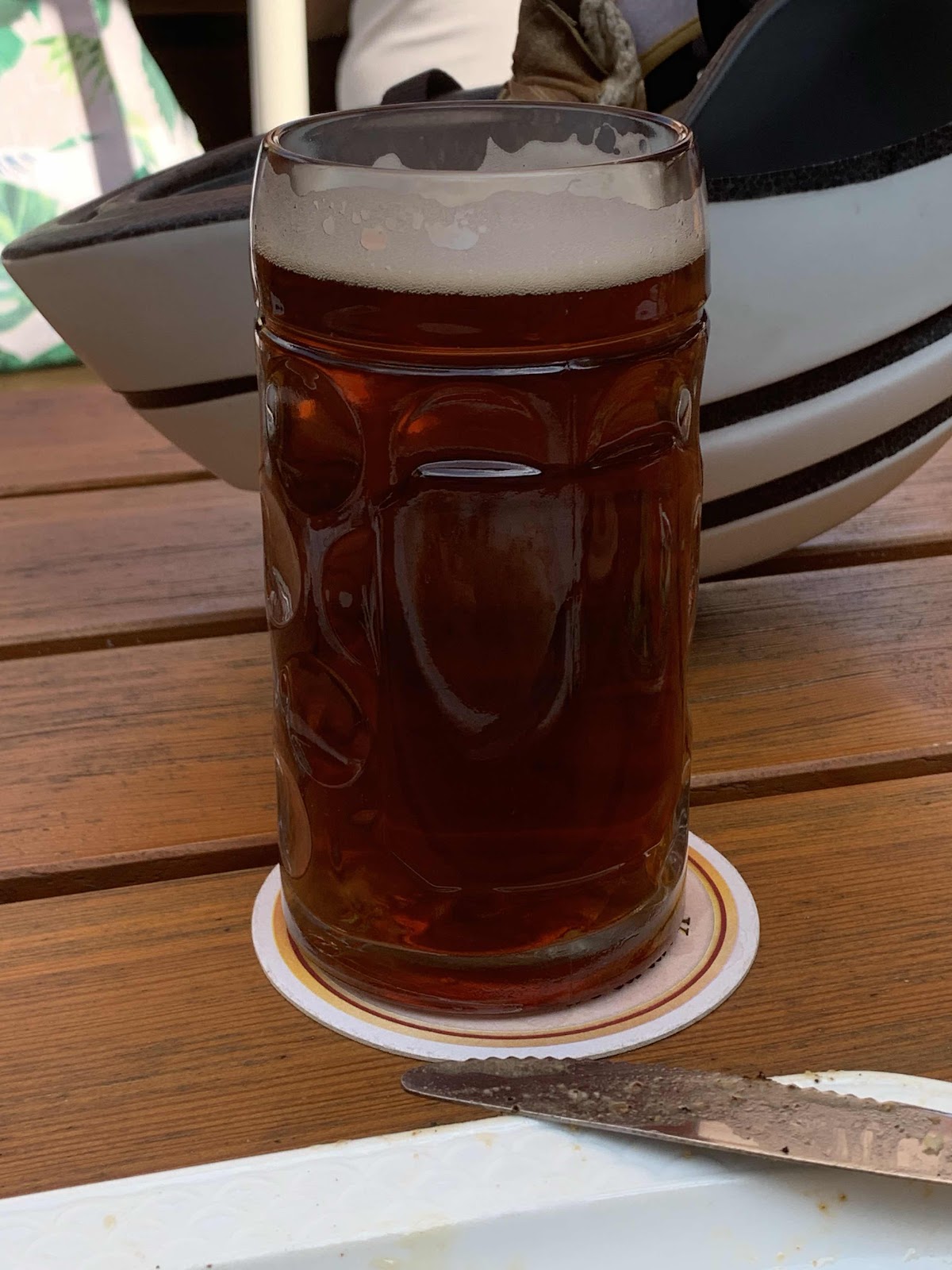 Another Pils and then the band started to play and it was time to leave.
There is a bunch of construction in Hallstadt and we missed the detour on the way out but had no problems on the way back.