We decided to head for Stettfeld today, to Brauerei Schwarzer Adler. This is one of my favorite breweries and it is just over the border in Unterfranken.
It was the warmest day so far and we had a stiff headwind as we headed out. By the time we got to Viereth I was ready for a break so we stopped in again at Mainlist 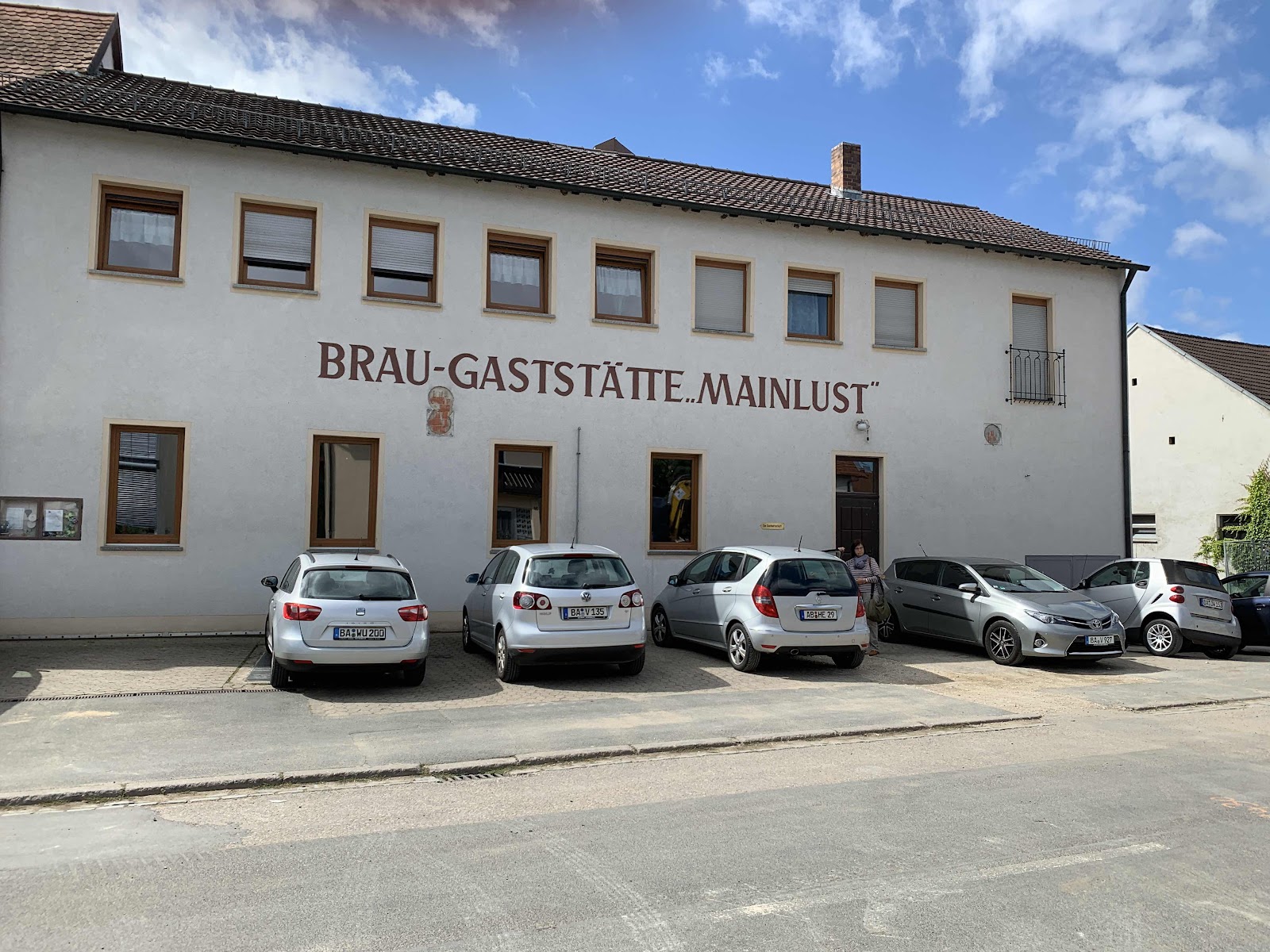 Of course a beer was the first order of business.  Over the years I have found their beers to be variable — from meh to quite good. This one was bland but eminently drinkable. 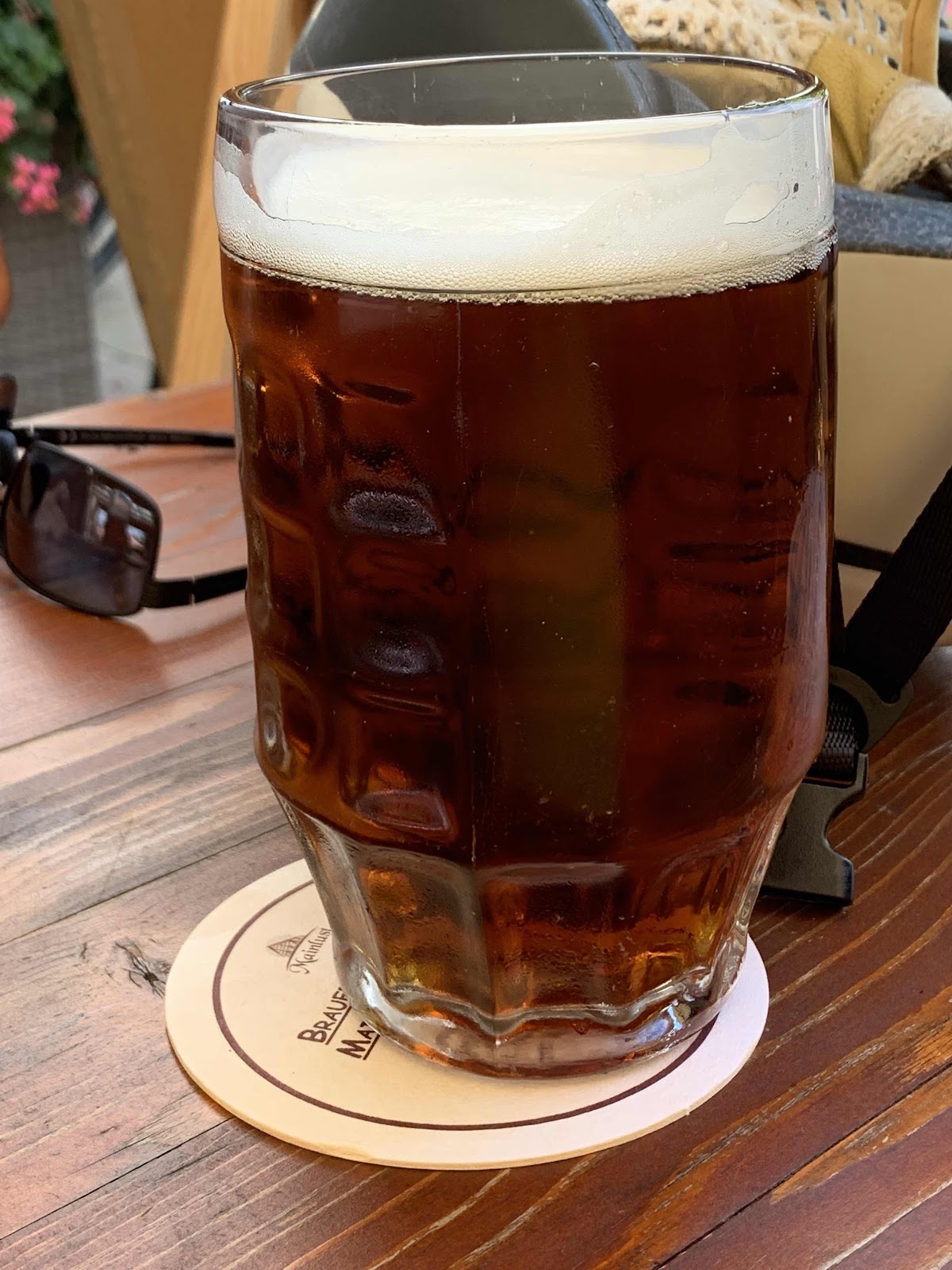 I thought to get something light for lunch but I forgot it was Sunday and the menu was mostly big meals, Schäuferla, Schweinebraten, etc. They did have Pfifferlinge (Chanterelle mushrooms) in a cream sauce with some kind of bread kloss and a salad. That worked. 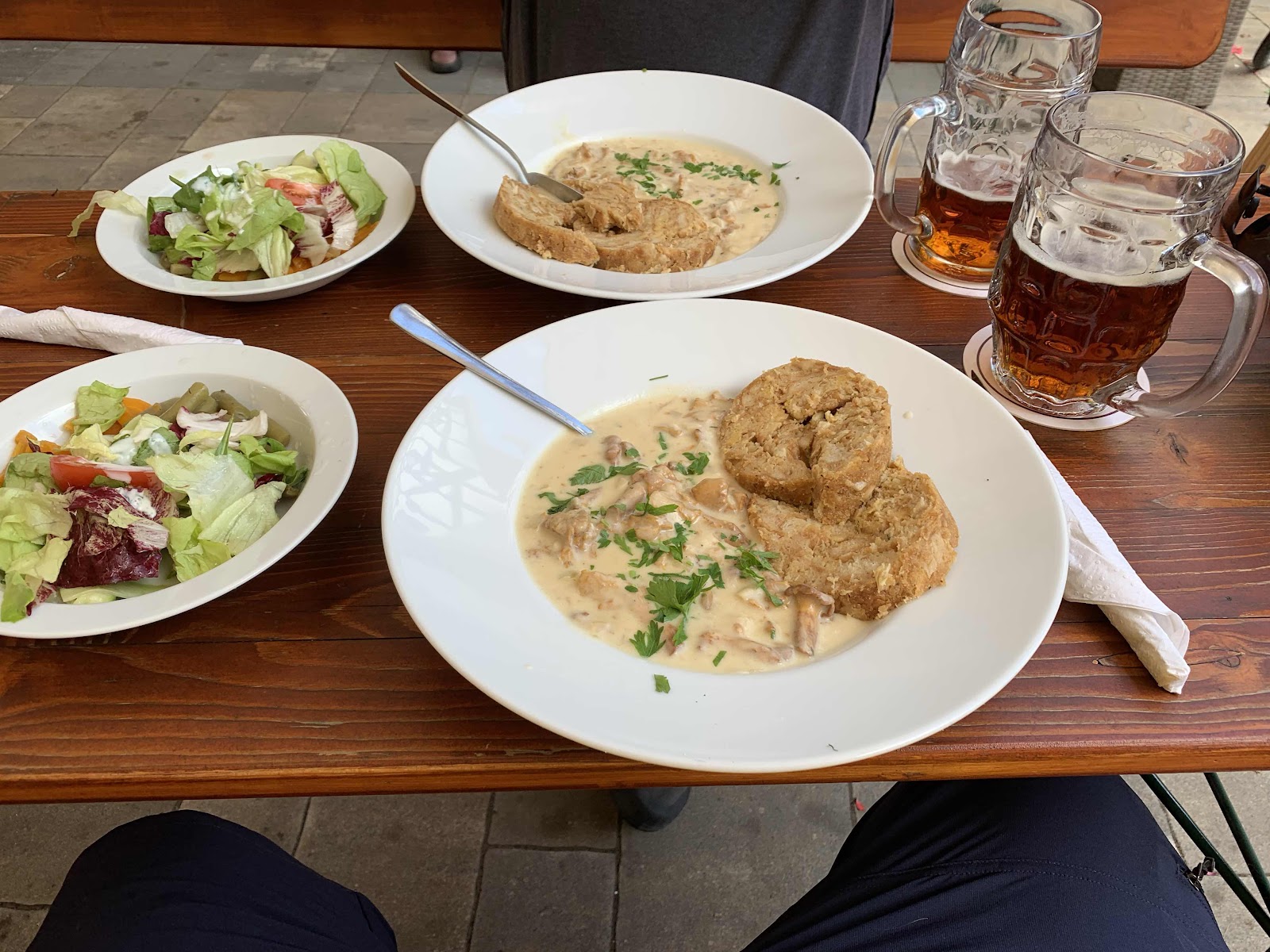 Soon back on the ride, refreshed and fortified. Not much interesting on the way, lots of farmland and off on the hills some vineyards. 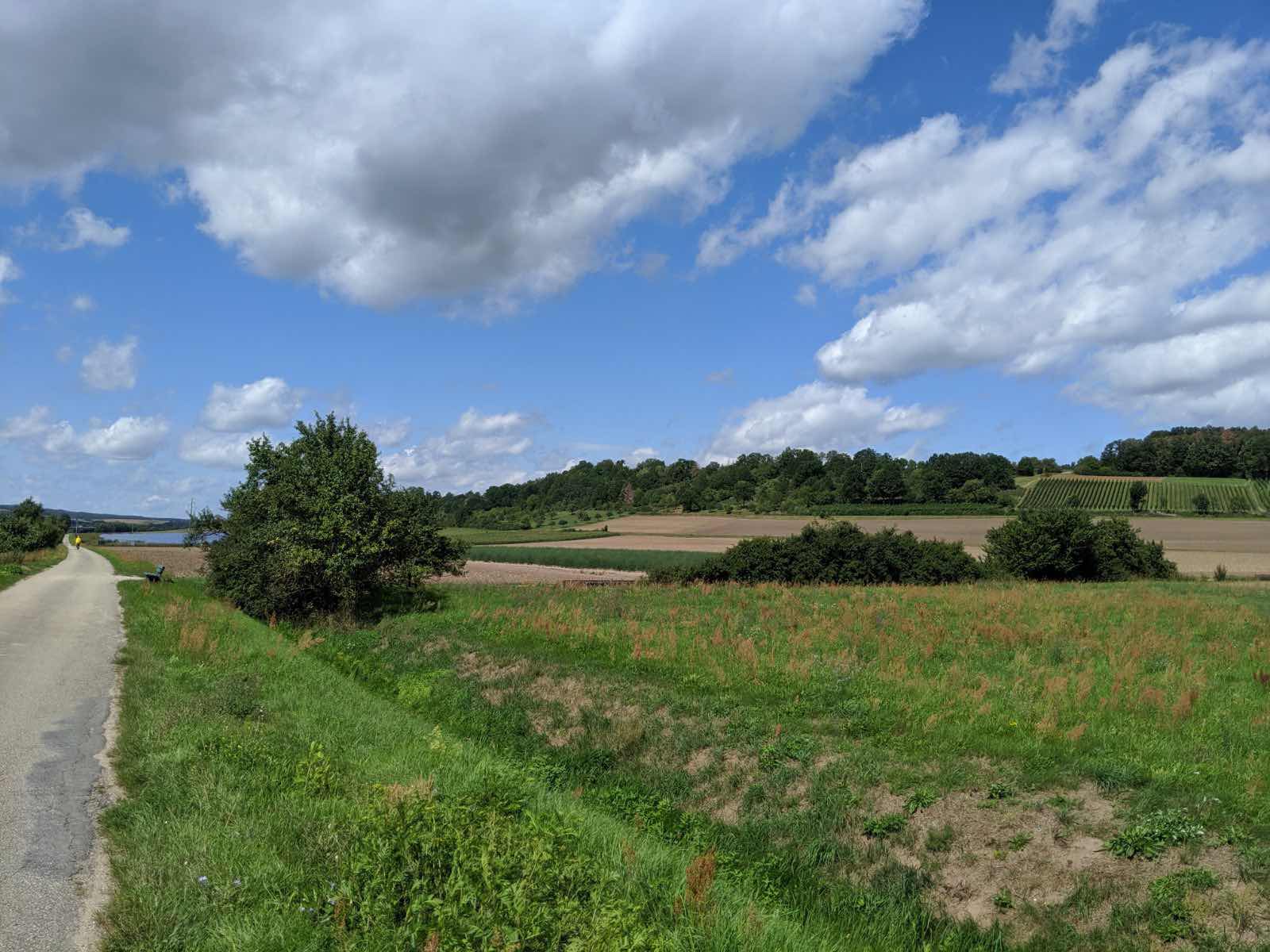 After passing thru Staffelbach home of the now closed Brauerei Hertlein. There were a couple of cars parked in front but it still looked very closed. There are rumors from time to time that someone was going to take over but I’ve heard no new on that.
Past Staffelbach is Stettfeld, home of Adler-Bräu, a/k/a Brauerei Schwarzer Adler. 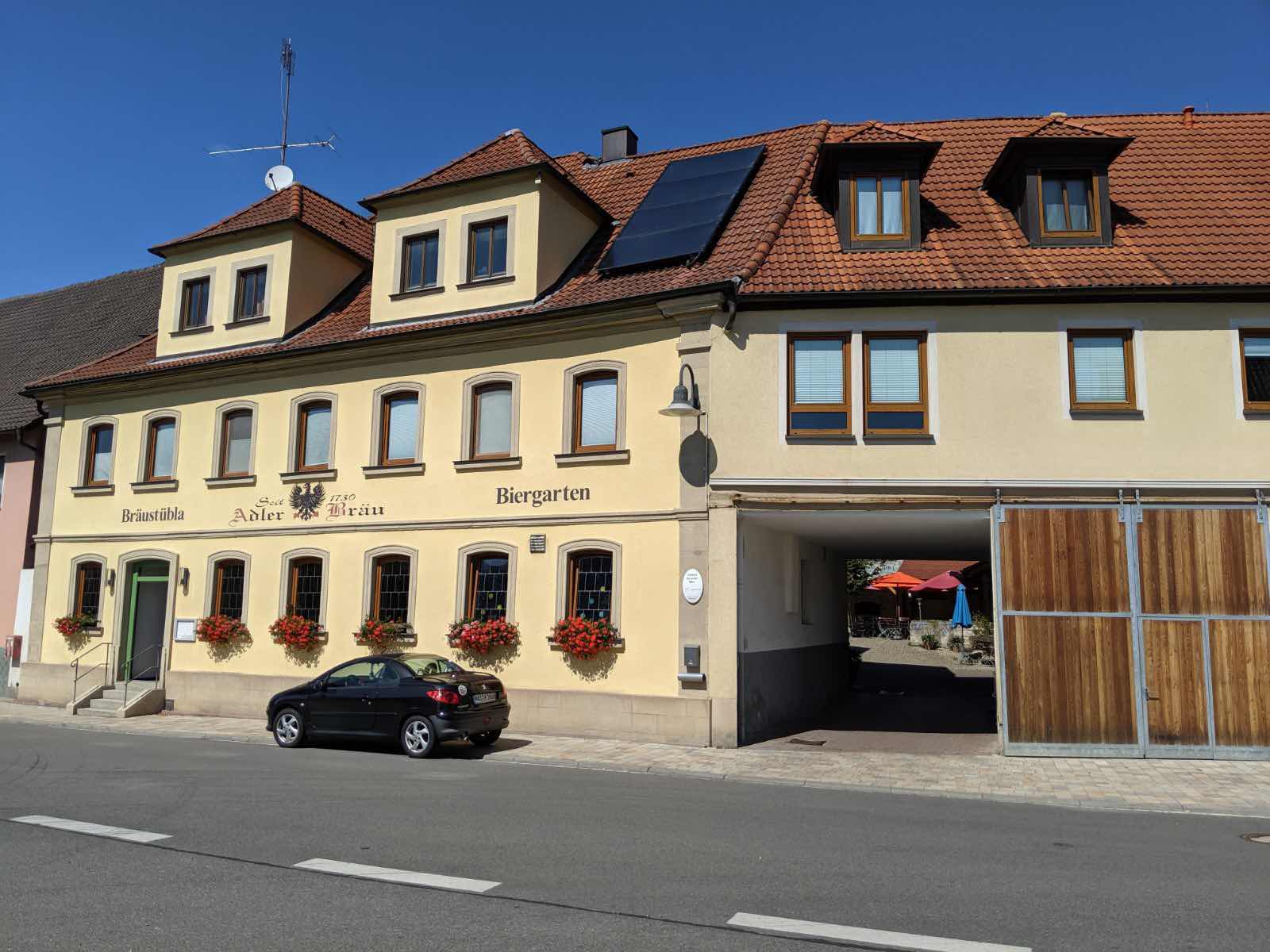 They have a little Biergarten in the courtyard in the back and I was at first surprised to see the tap back there closed and almost nobody there. Then again I realized it was Sunday and everybody was inside having their Sunday meal. 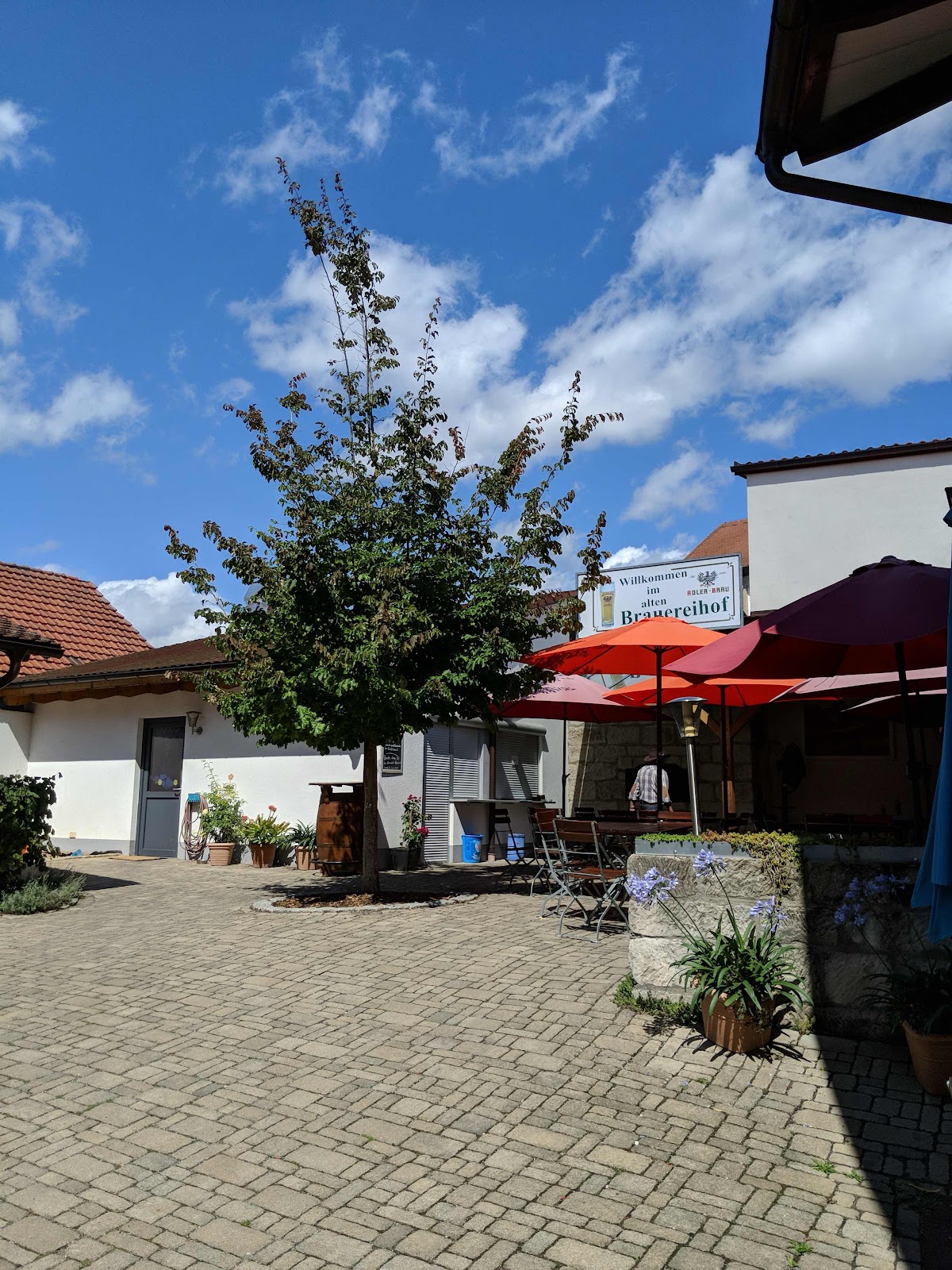 No big deal, just means we have to fetch our own beers. Their Pils is their flagship beer and they had a Lager on tap as well. 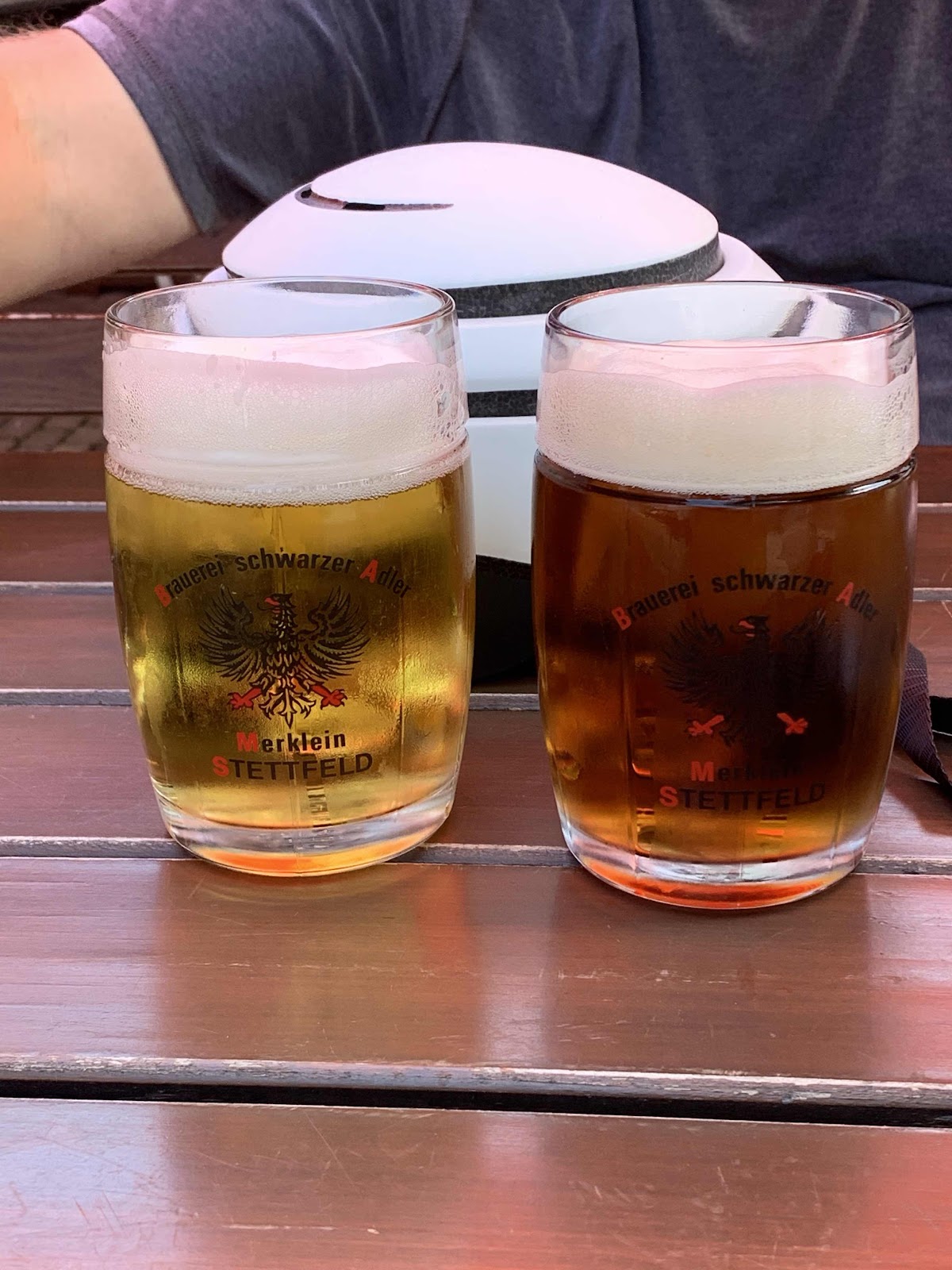 After 20km this was a two beer stop so I had another Pils. Would have had a third but it was a long hot ride back to Bamberg so I passed.
When I first started to ride out to Stettfeld back in 2007 I didn’t have a phone with a data plan so I relied on paper maps. The route I found means riding on a country highway for a bit. There never has been any issue with that — it is not real busy and German drivers are (mostly) respectful to cyclists. But Google Maps showed an alternative way thru the fields that didn’t have the highway stretch, was flatter and shorter to boot. What is not to like! So we tried it and the surface wasn’t quite as good as on the way out but was passable. We lost a bit distance savings backtracking where a sign was missing but all in all it was fine.
Soon we were back to the Regnitz had were approaching Bischberg, home of Brauerei zur Sonne. We hadn’t stop in yet this trip so we did. 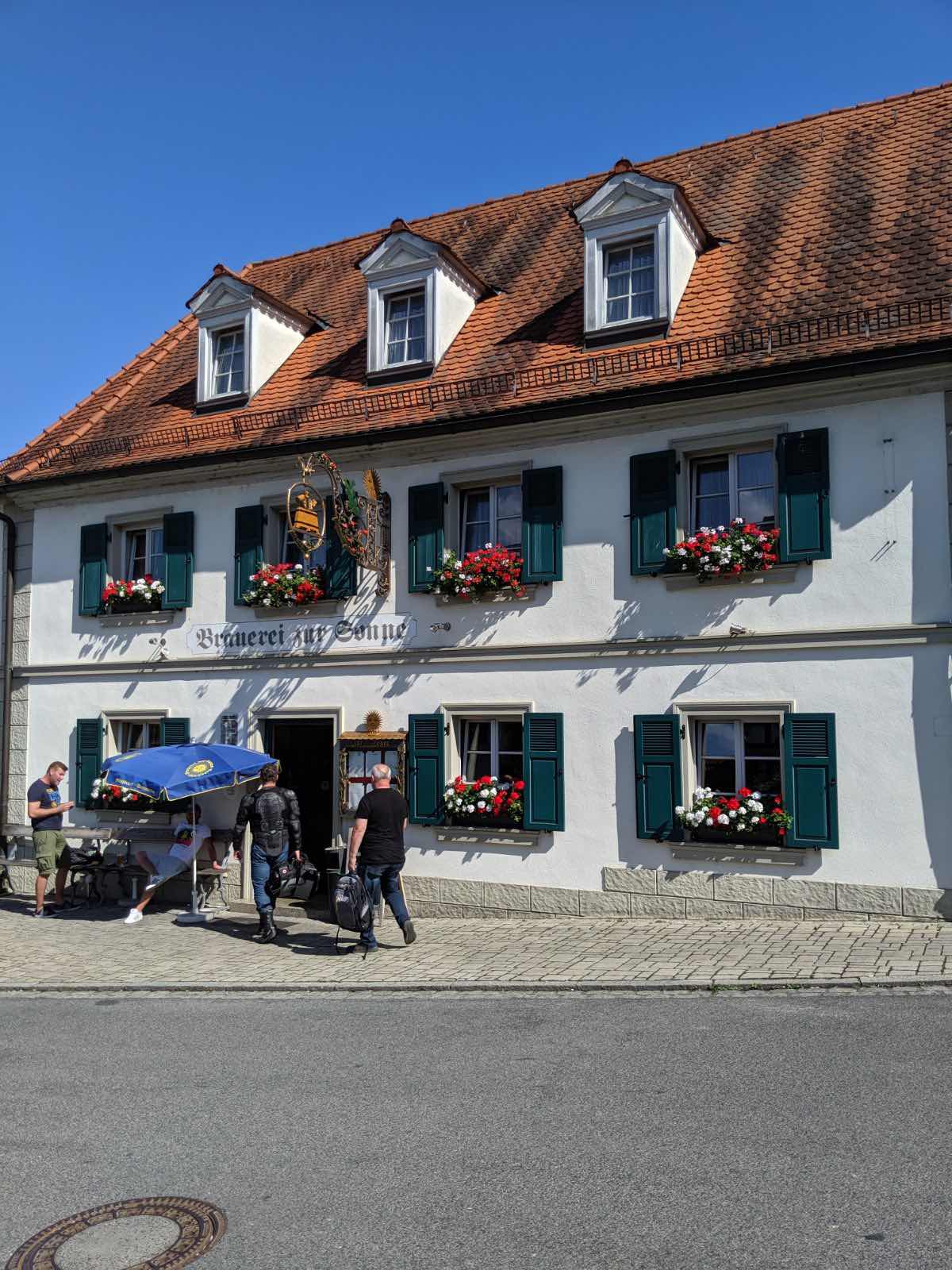 We ordered the Lager and it was wonderful as always. So nice, we had another. 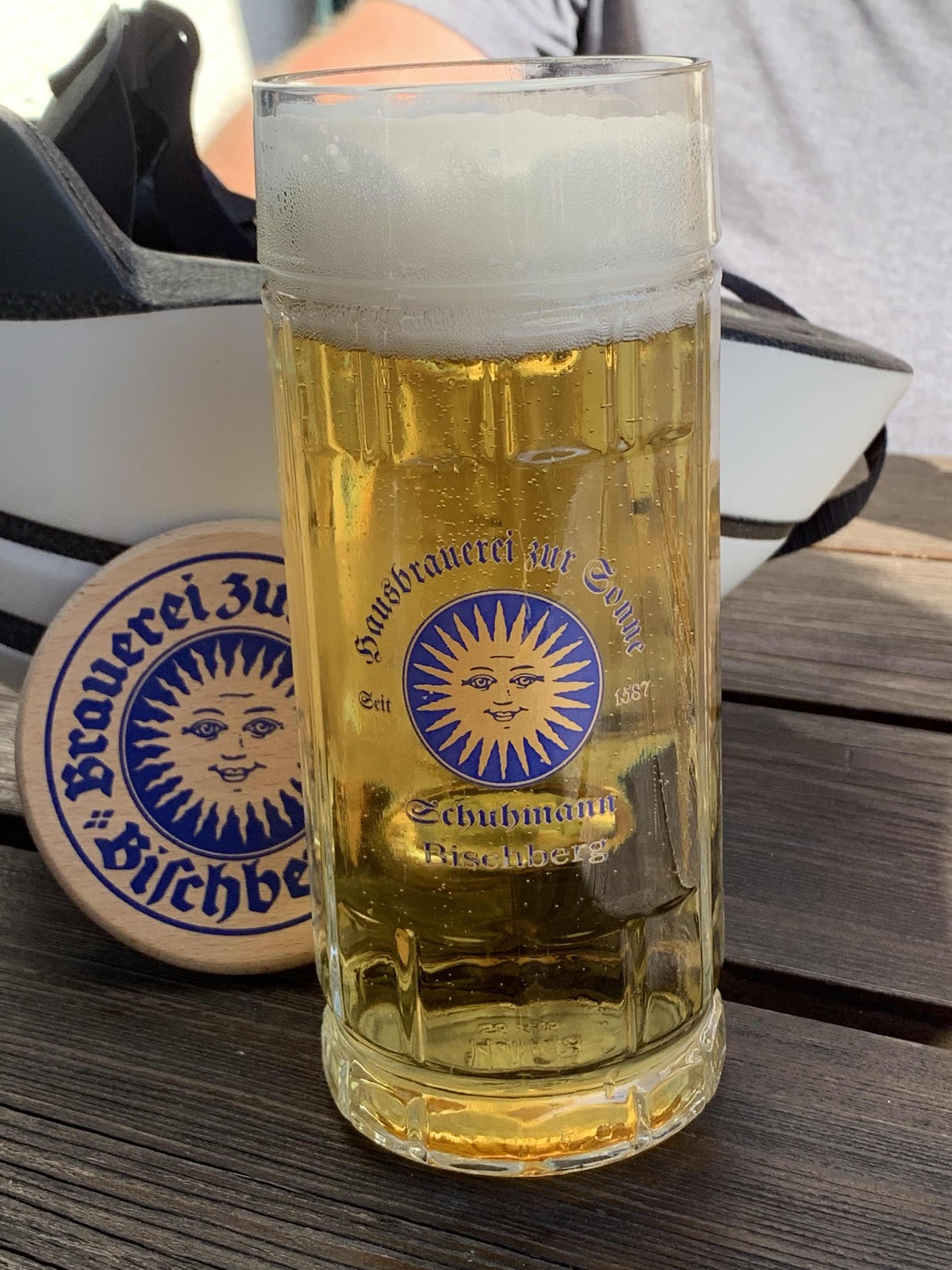 Then it was a short ride into Bamberg, were we stopped at Schlenkerla. I had the Kräusen and Bob had the Märzen. I wasn’t a fan of the Kräusen when it first came out but the past few years they have hit their stride and now I prefer it on a warm day. 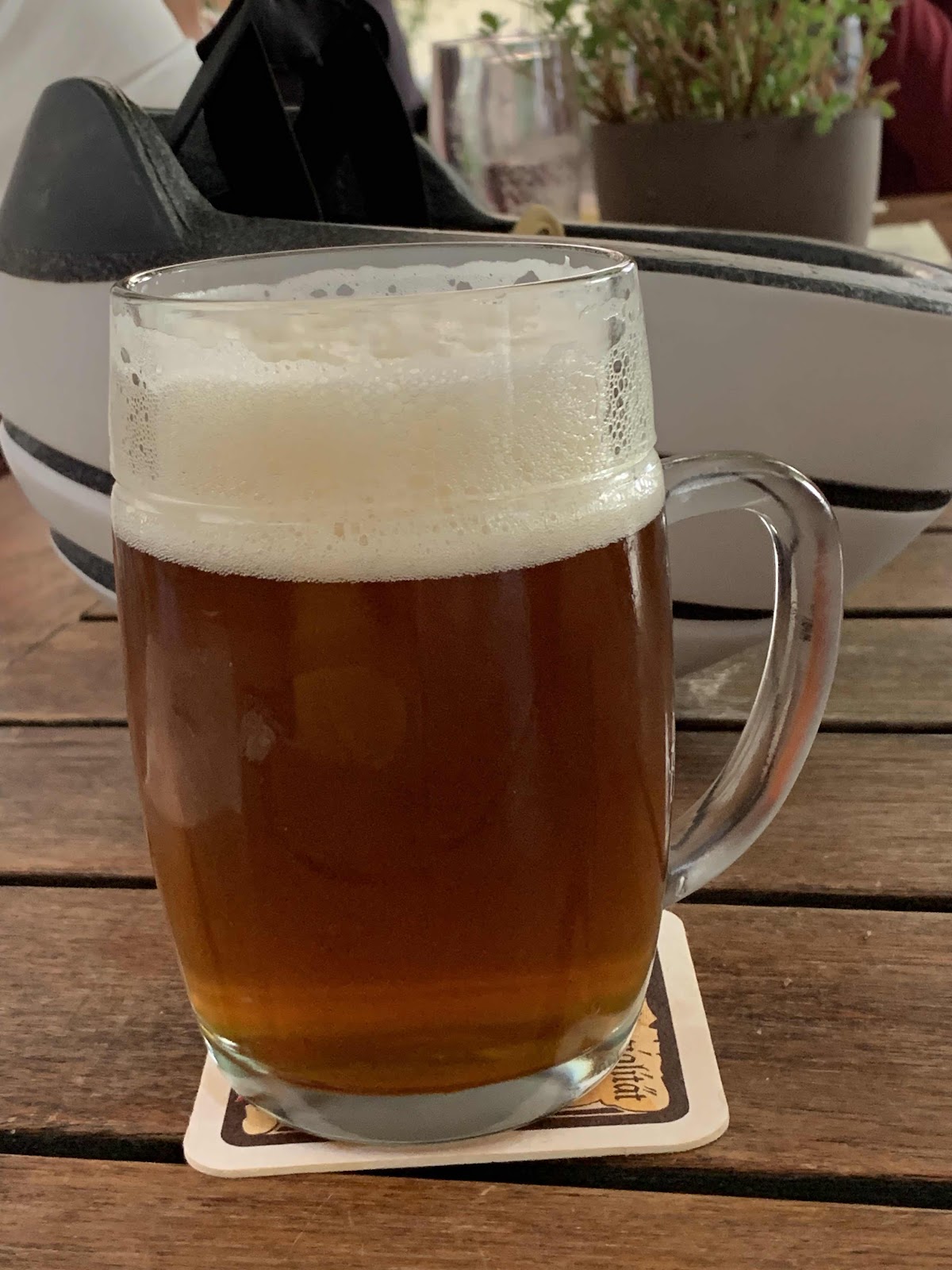 I also realized I’d been in Bamberg for a week and have not yet had a Bamberg Onion. So I ordered one. 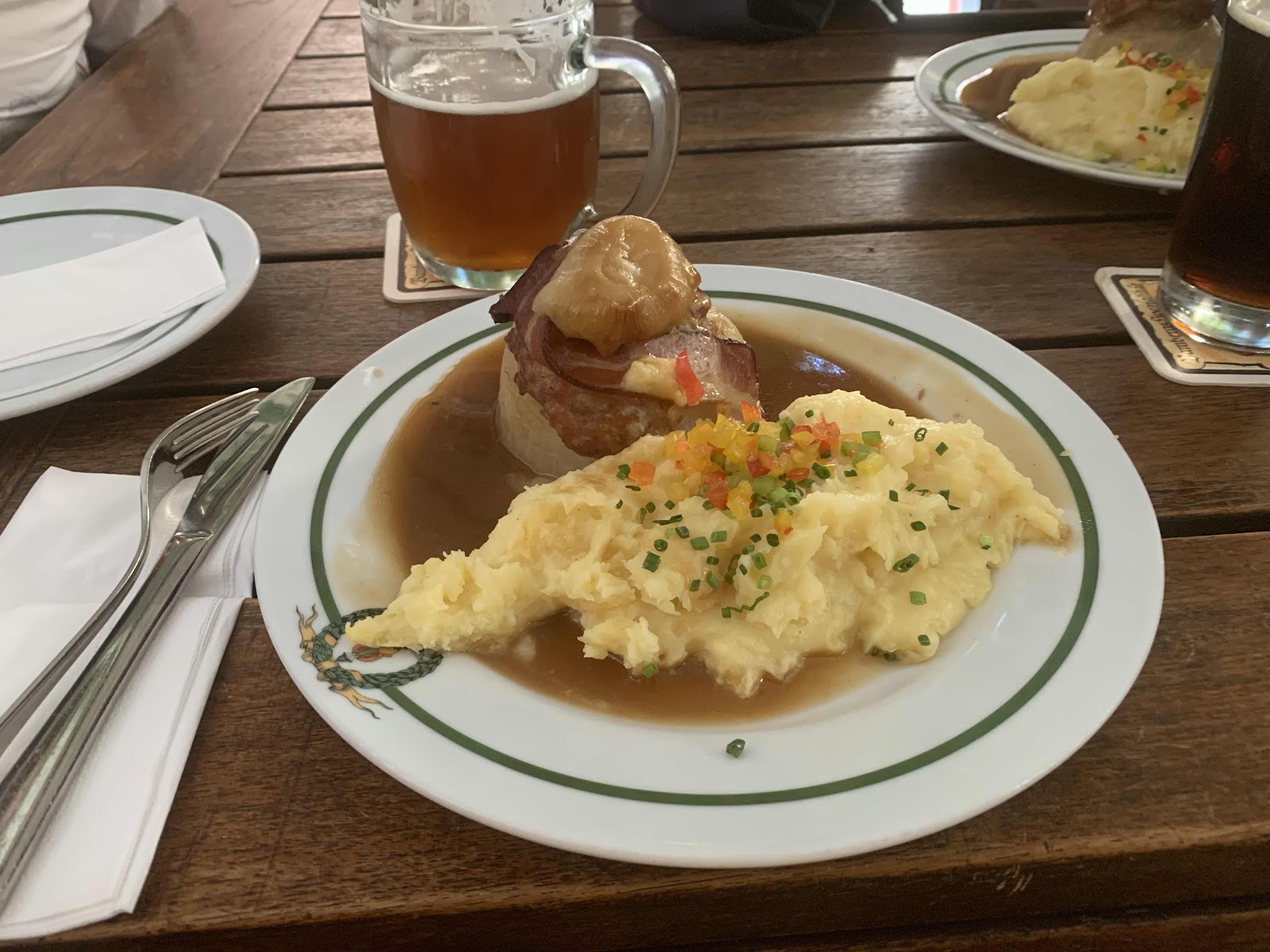 Delicious as always. And in case somebody is wondering, that is mashed potatoes with it.
A relatively flat 42km for the day.