Our destination for the day was Mürsbach, home of Sonnebräu, roughly 20km or so north of Bamberg. On the way back were opportunities for visiting a number of breweries.
Just before you come to Kemmern, there is a bench and the sign below. Behind the bench is a babbling brook and if it isn’t too windy out it is very calming to sit and listen to the “River music.” (If there is wind you mostly hear the rustling of leaves in the trees). I made a recording with my phone but the microphone isn’t really good enough for this and it mostly sounded like static. 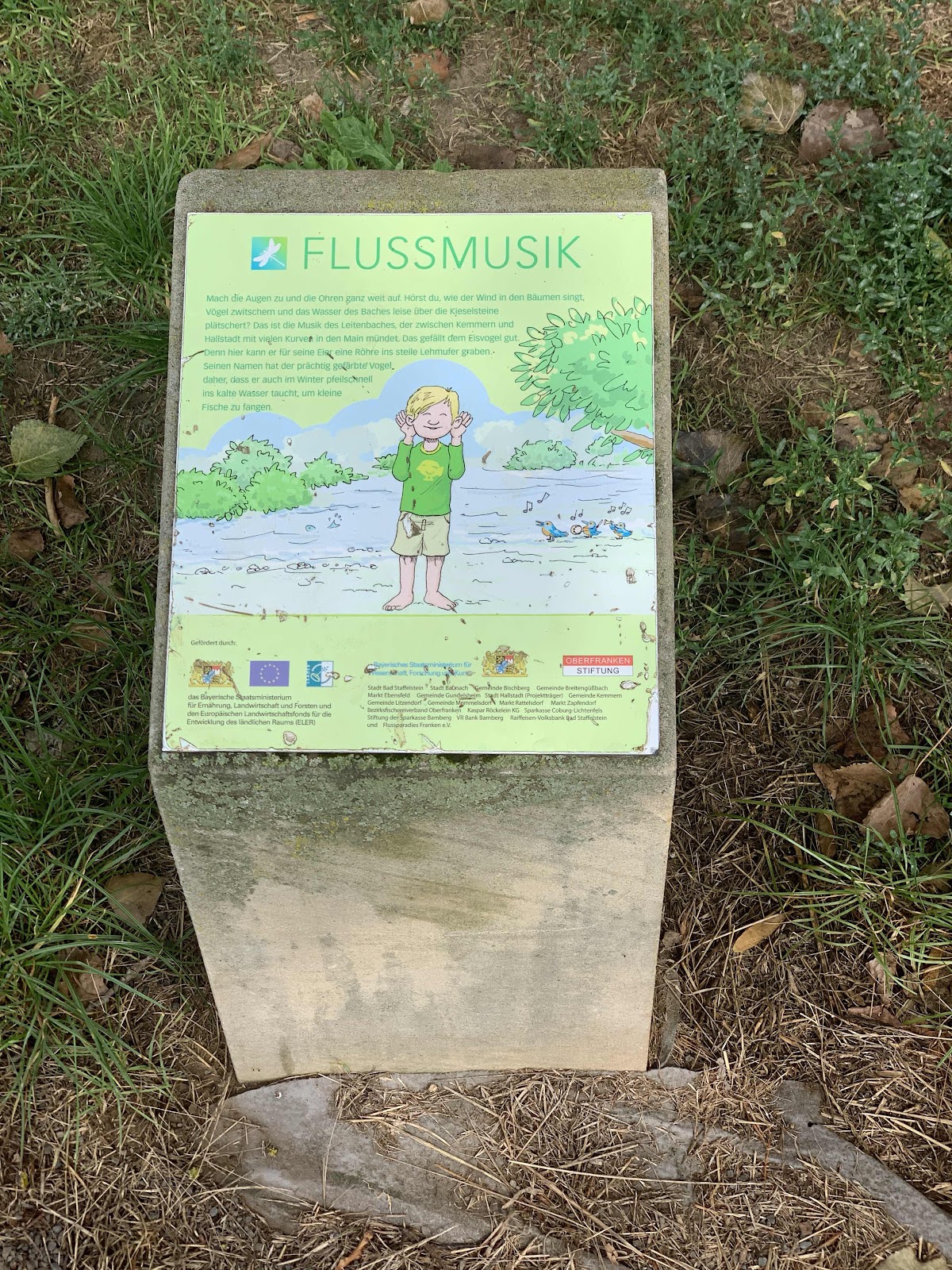 Brauerei Wagner in Kemmern doesn’t open until 3pm so we saved it for the return trip and continued on to Breitengüßbach, home of Brauhaus Binkert. 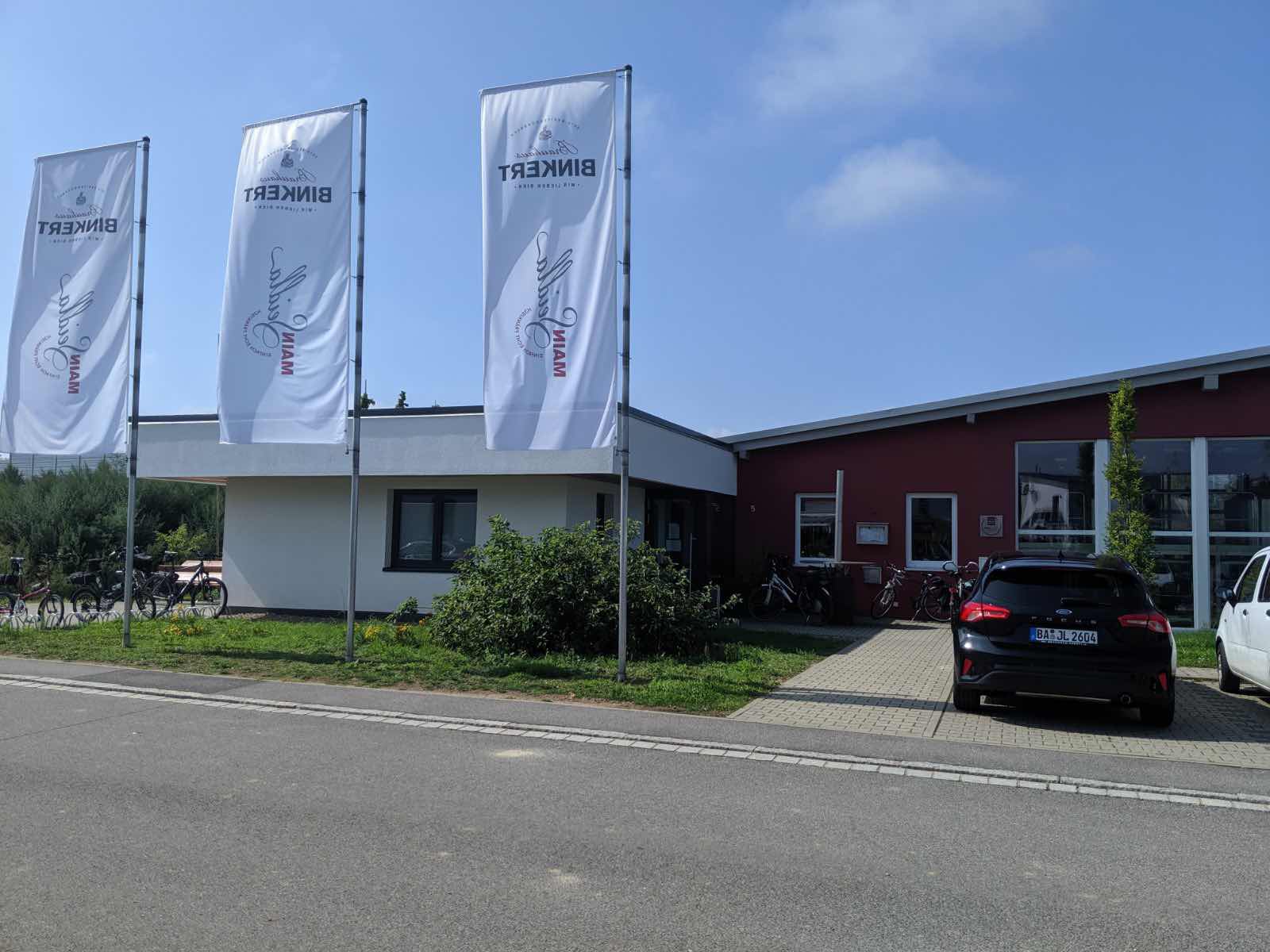 They have ten beers on tap, most of them under the Binkert name but they also do contract brewing for a number of German “Craft” brewers and will occasionally have some of those beers on tap as well. I went with the Kellerbier, which is reportedly just an unfiltered version of the Pils. In any case it was good. 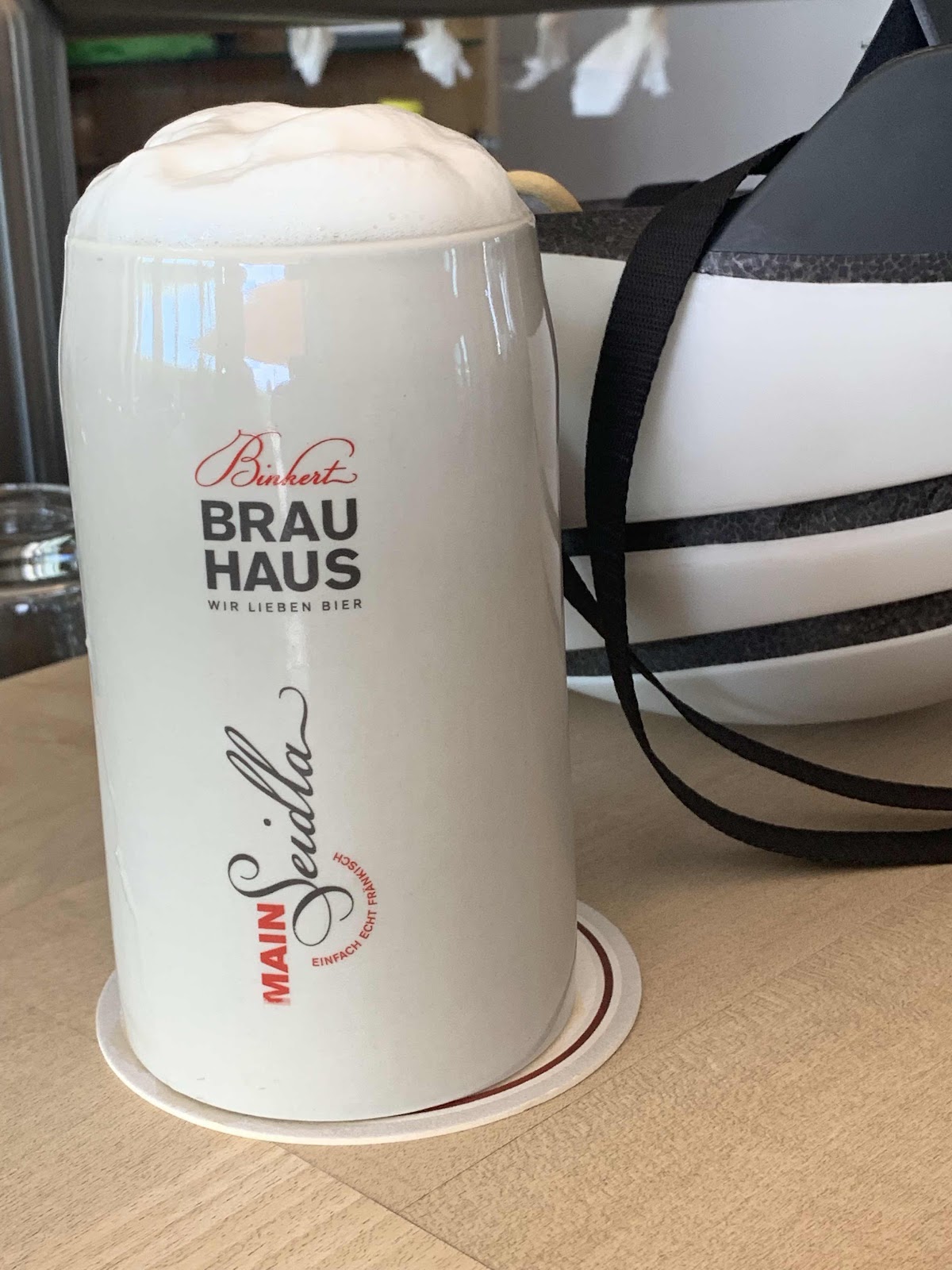 As you can see, quick a varied list of beers. Worth a longer stay be we still had a ways to go. 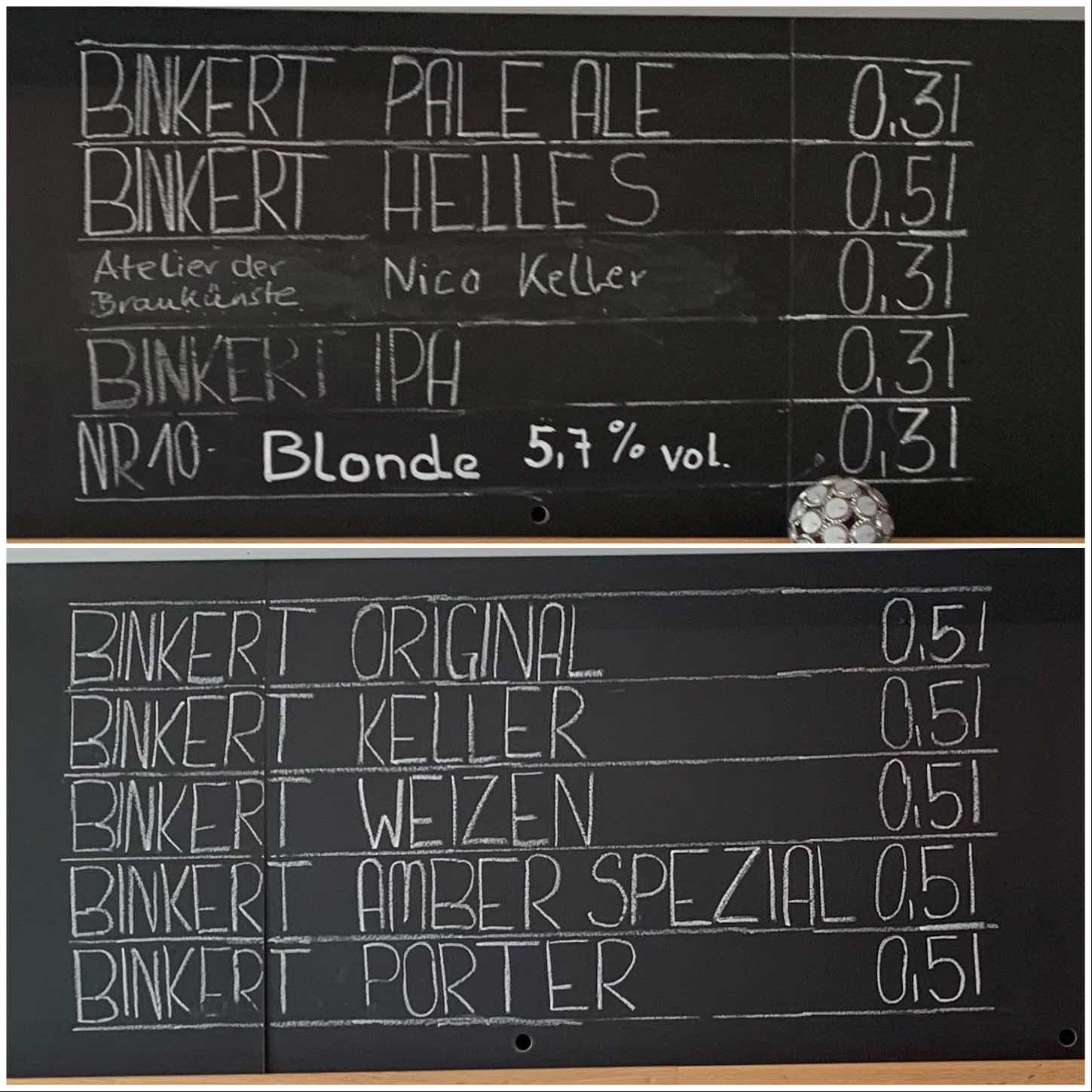 The route I usually take was plotted from an old paper map prior to the days of smartphones. I just happened to check options on Google Maps and found there was a bicycle route from Rattlesdorf almost to Mürsbach rather than the country roads I usually took. So we tried it and it was a good choice, one of the best surfaces I’ve ridden in these parts — smooth, not bumps, gradual ups and downs, no sudden sharp drops or steep climbs. Also tree shaded and away from the highway it was a very enjoyable ride.
Soon we were at Mürsbach and Sonnenbräu. 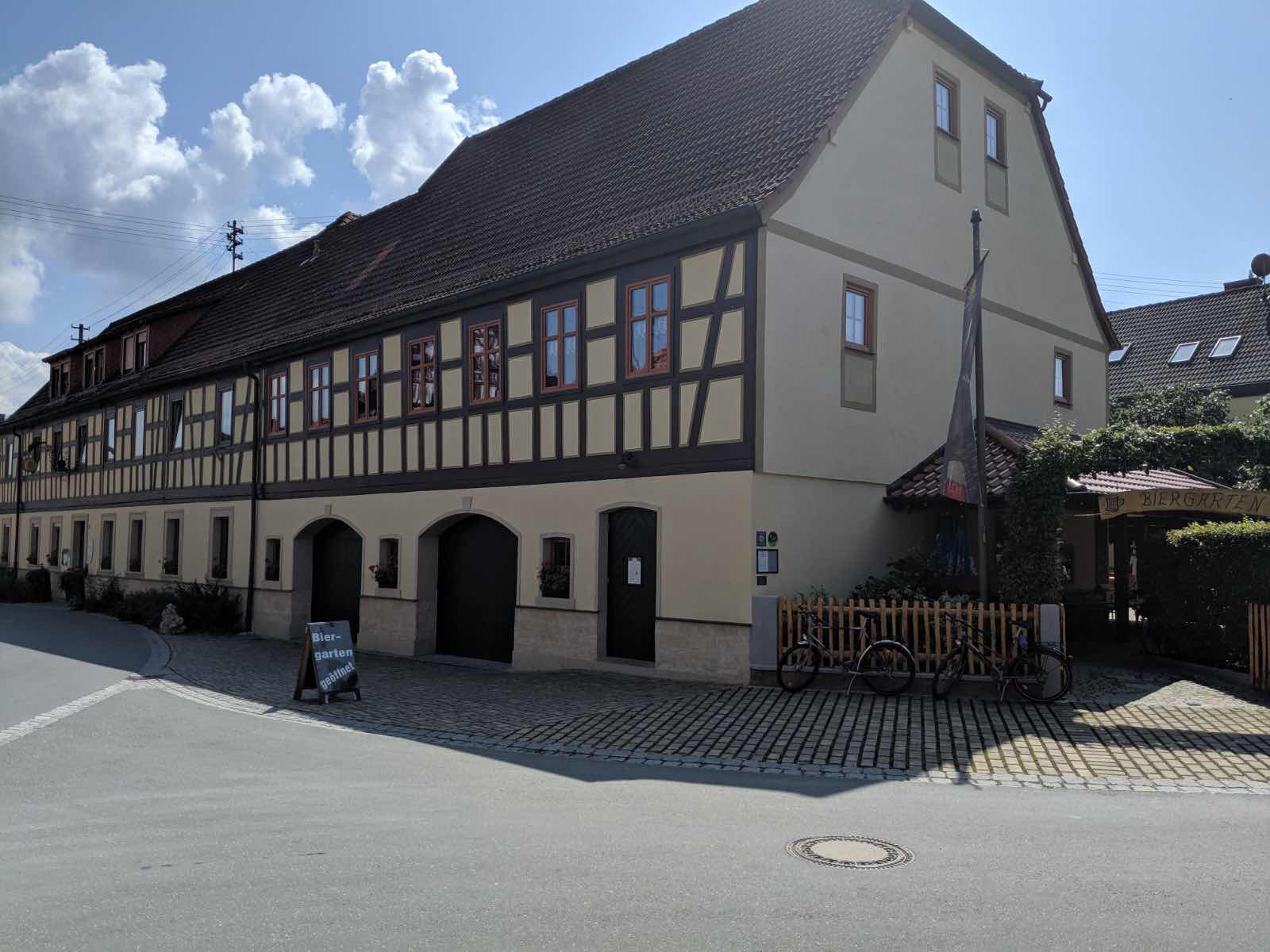 They have two standard beers (Kellerbier and Weizen)  and a rotating seasonal, this time the “Hopfenblümla” which they describe as a 3.5% Session IPA but that designation really doesn’t do it justice. Lots of late hopping and flavor and you don’t really notice the lower alcohol. 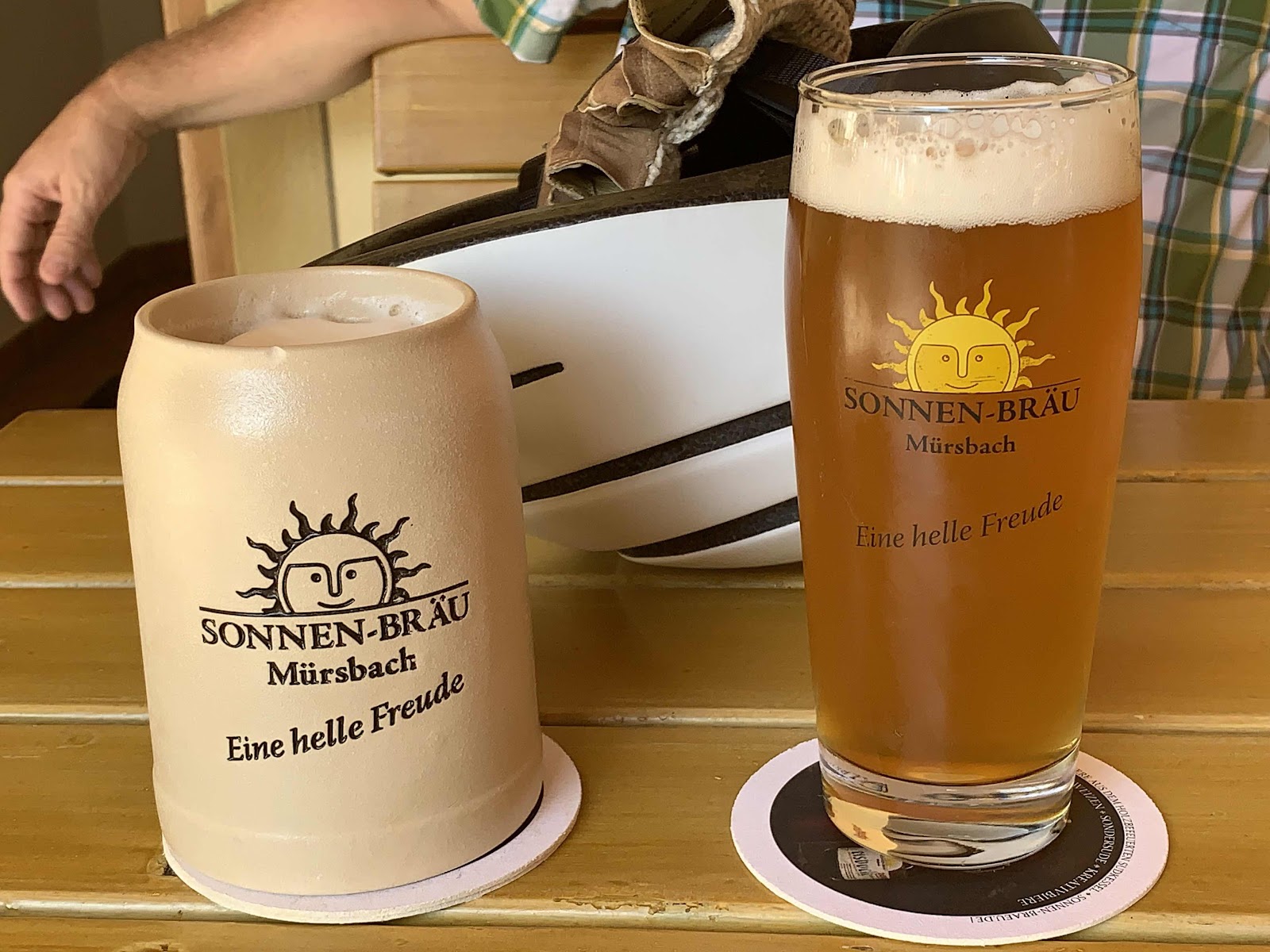 For lunch they we had Flammkuchen, a sort of flatbread pizza-ish thing. Delicious! 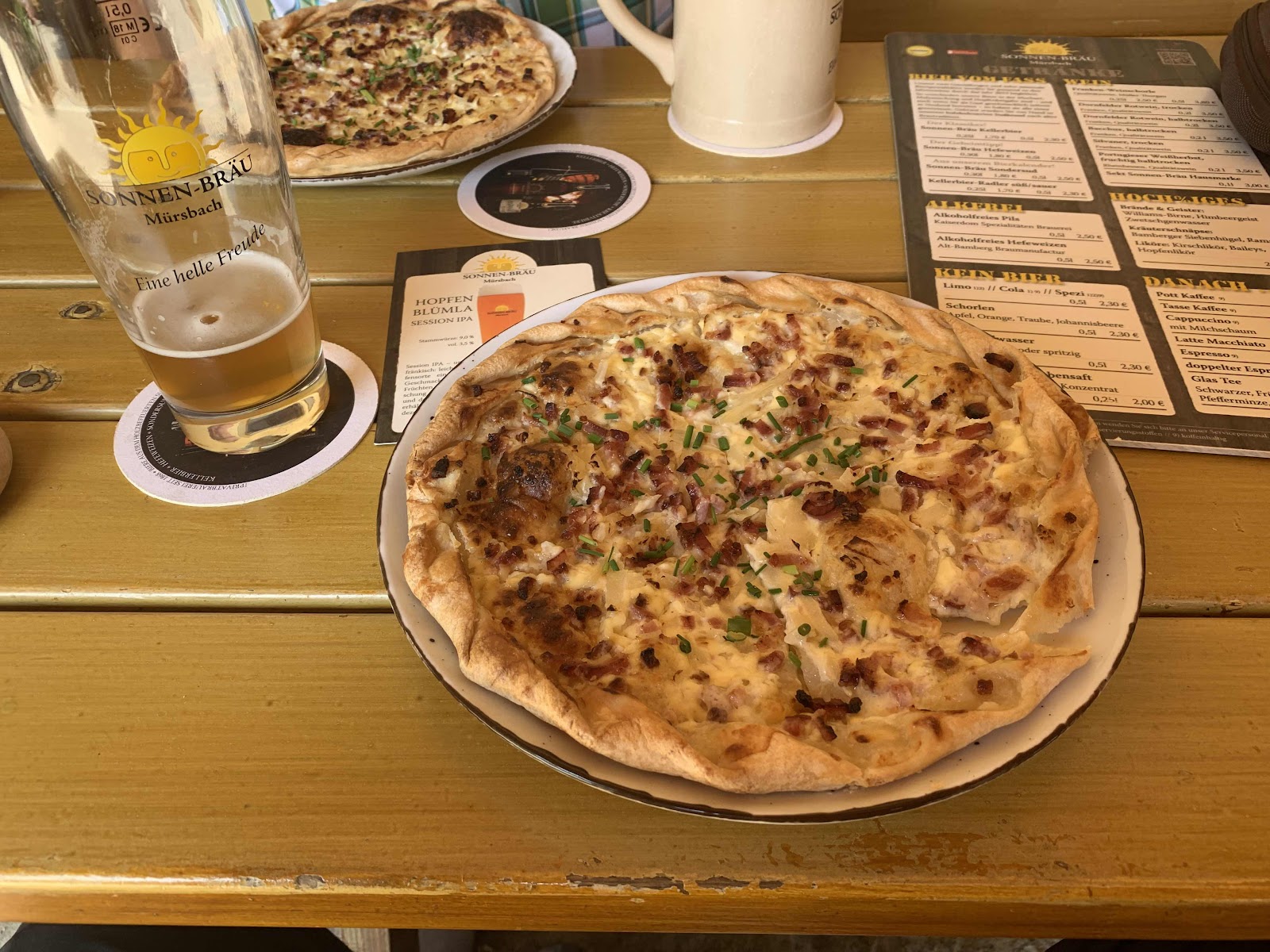 One thing I like about Sonnenbräu is they have a board with details about the current beers — when they were brewed, packaged, etc. You can see the Hopfenblümla was lagered for about half the time of the Kellerbier. 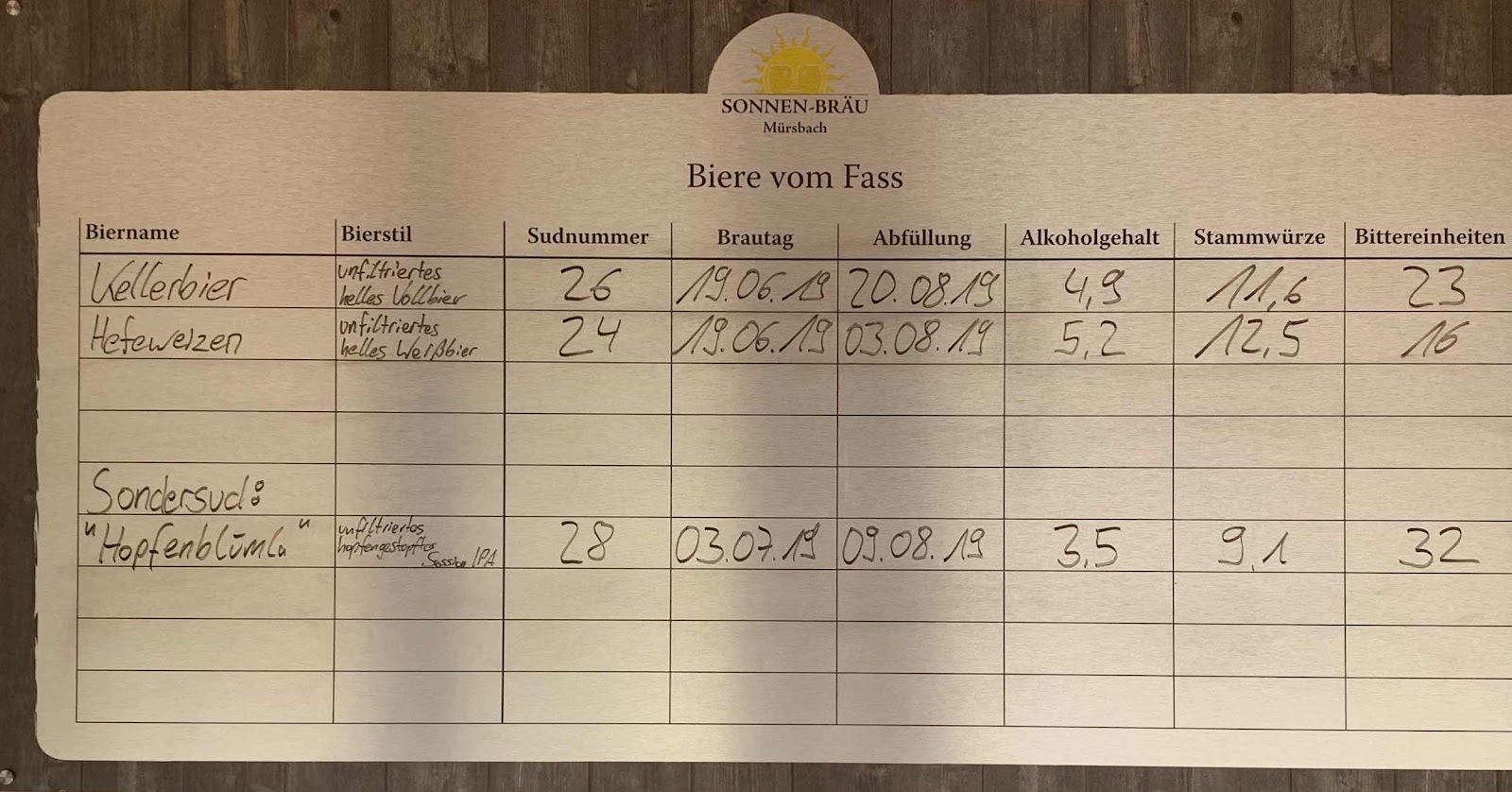 We decided to get back on the nice bike path and rode down to Freudeneck, home of Brauerei Fischer. 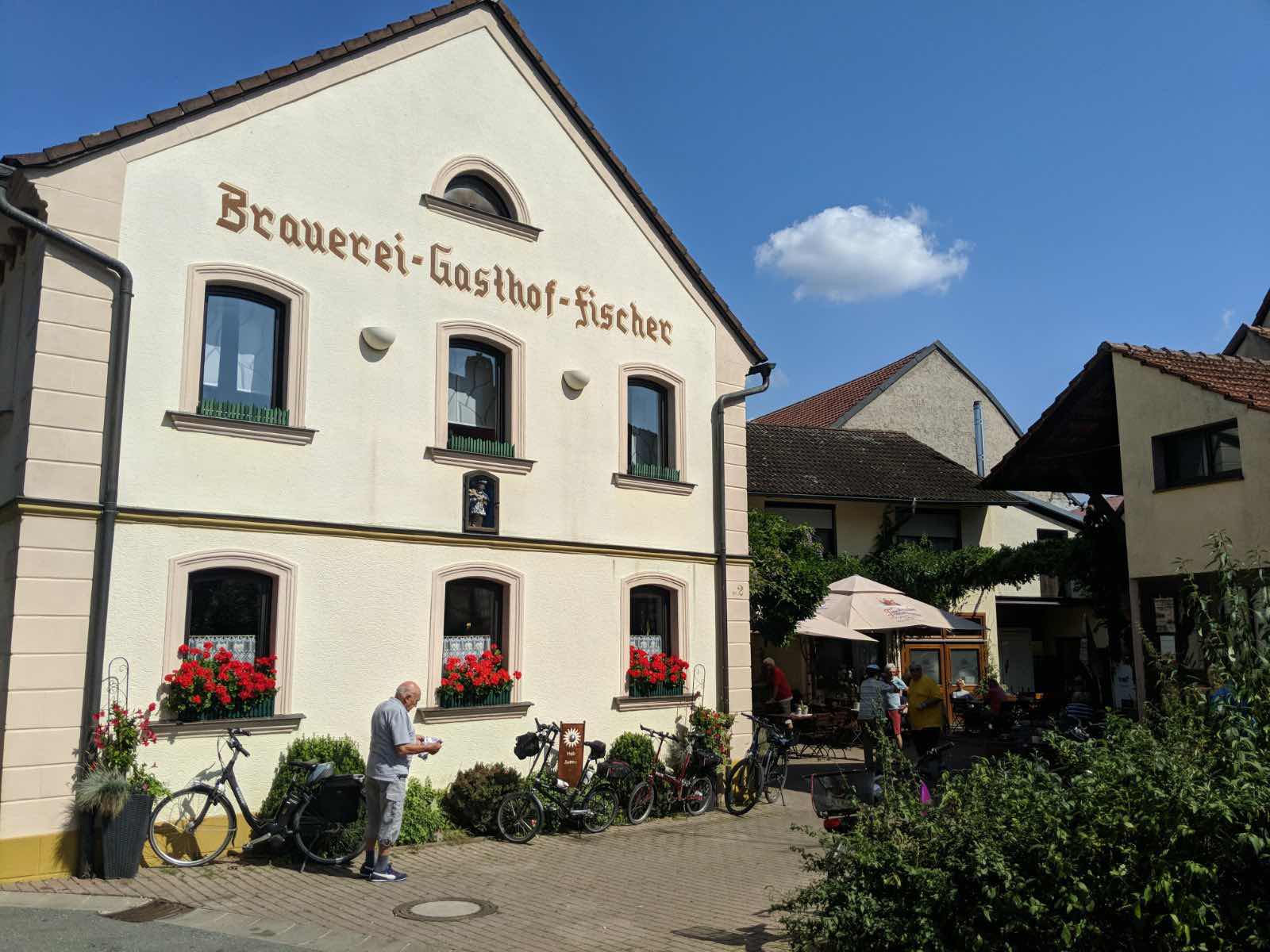 Their beer as had their ups and downs over the years. Ten-twelve years ago with was really good. Then there was a spell were it was still OK but not as good as earlier.  I enjoyed it when I was here last year and it was good today as well. From reactions on Twitter they win the prize for favorite krug. 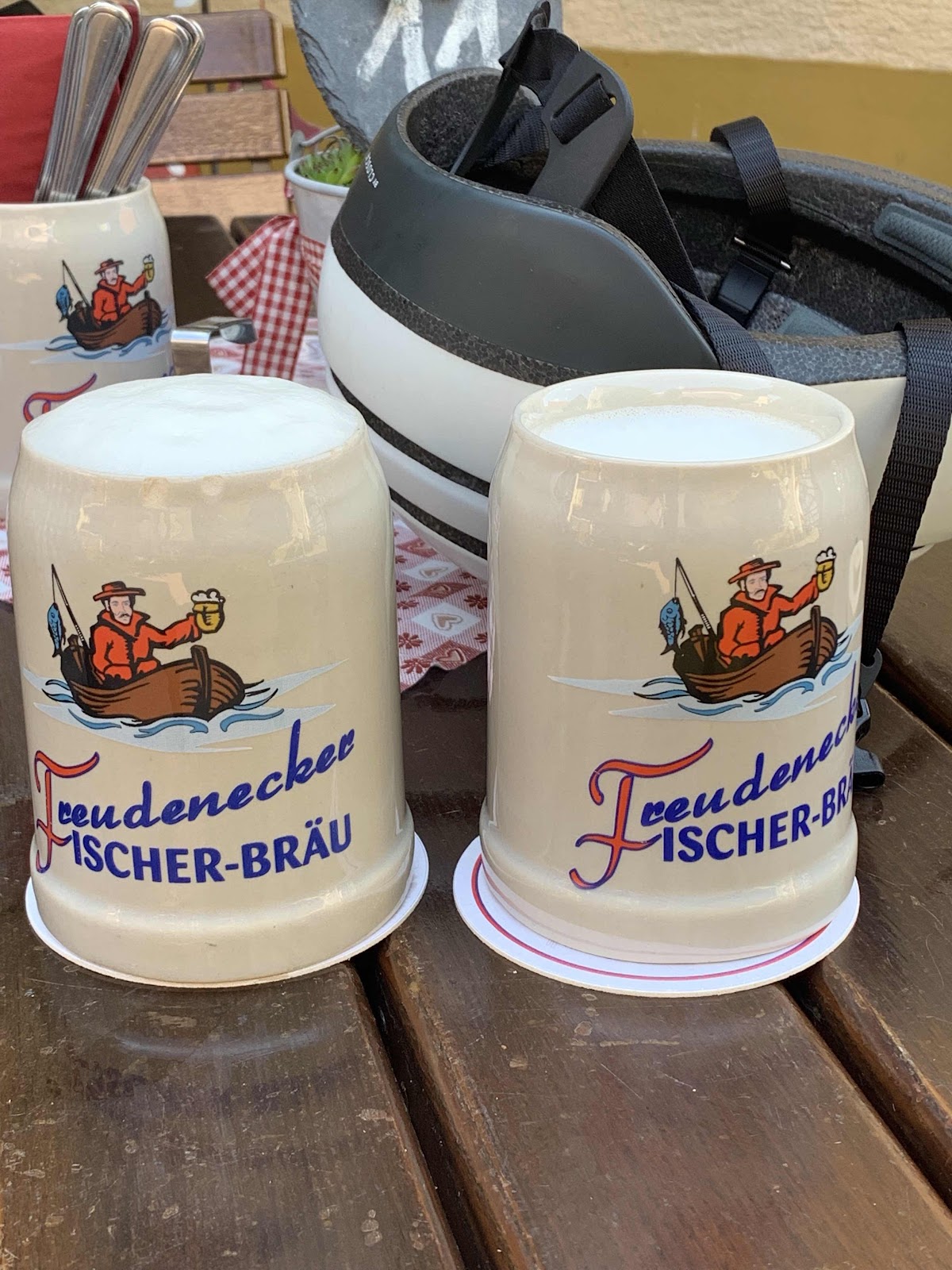 A bit down the road (and up a sharp climb at the end) is the village of Höfen and Brauerei Endres, also know as “Goldener Adler” 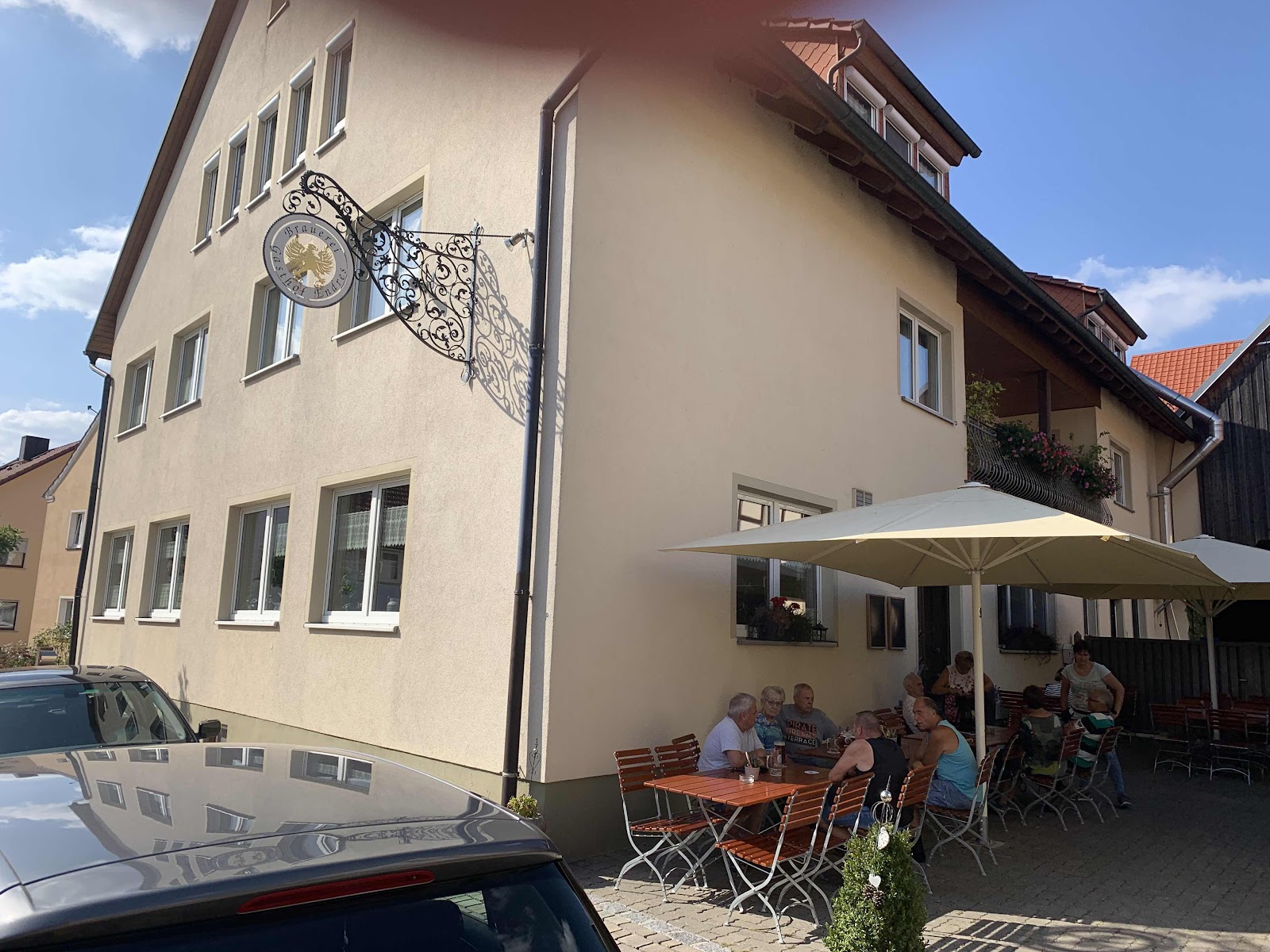 At times their beer has been very good and has a bit of a cult following. I have also had some less than stellar examples and sadly today’s was in the latter category. About the first quarter was fine but there was a little off flavor in the middle and that bad flavor just continued to build. By the time I was halfway thru I really didn’t want to finish it. If there had been a convenient large plant nearby (and no witnesses) I might have just dumped it. But we finished it. 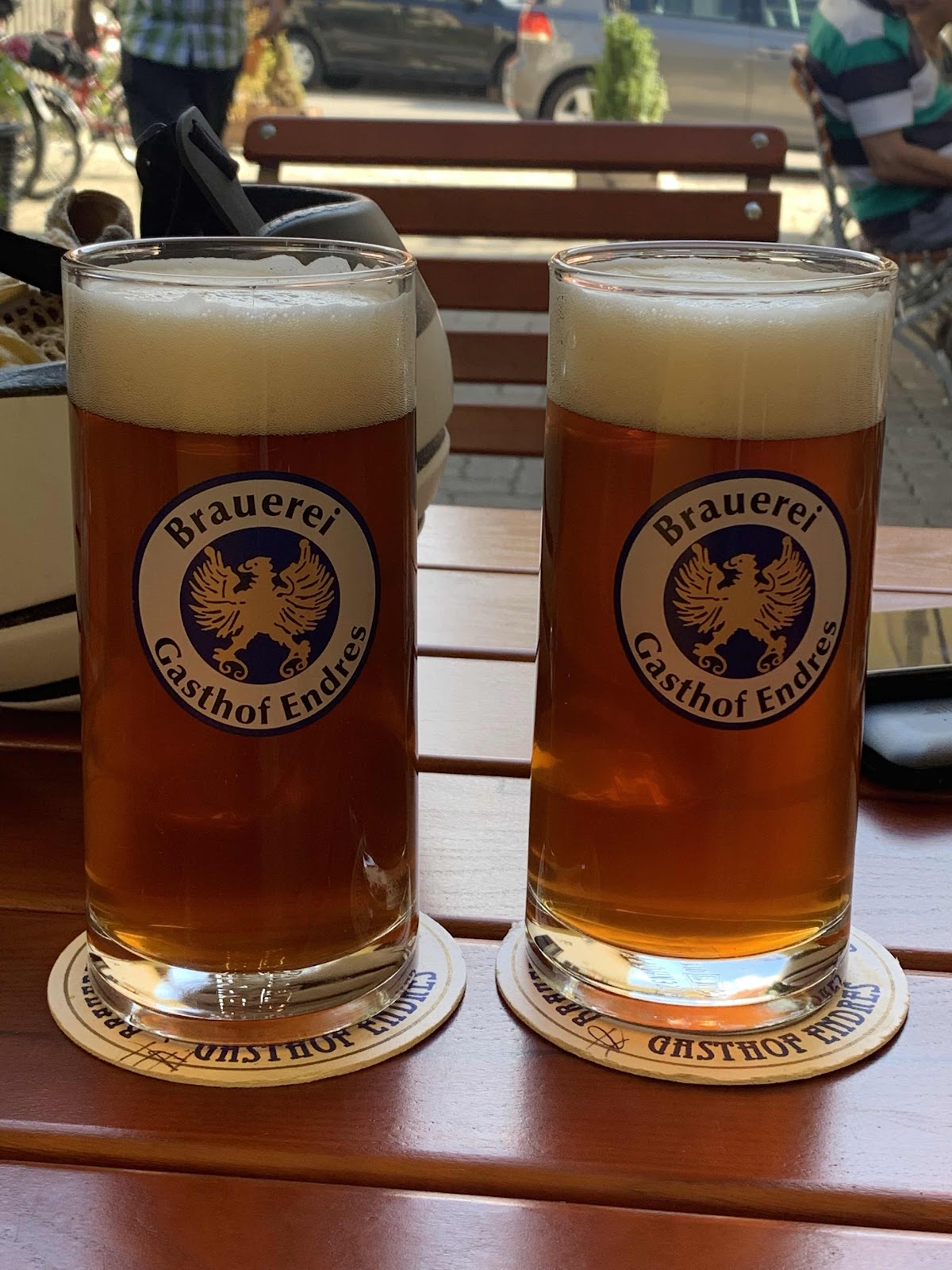 Continuing on we passed Binkert again but decided to press on to Kemmern a Wagner Bräu. Hopefully well make another go at Binkert this weekend. 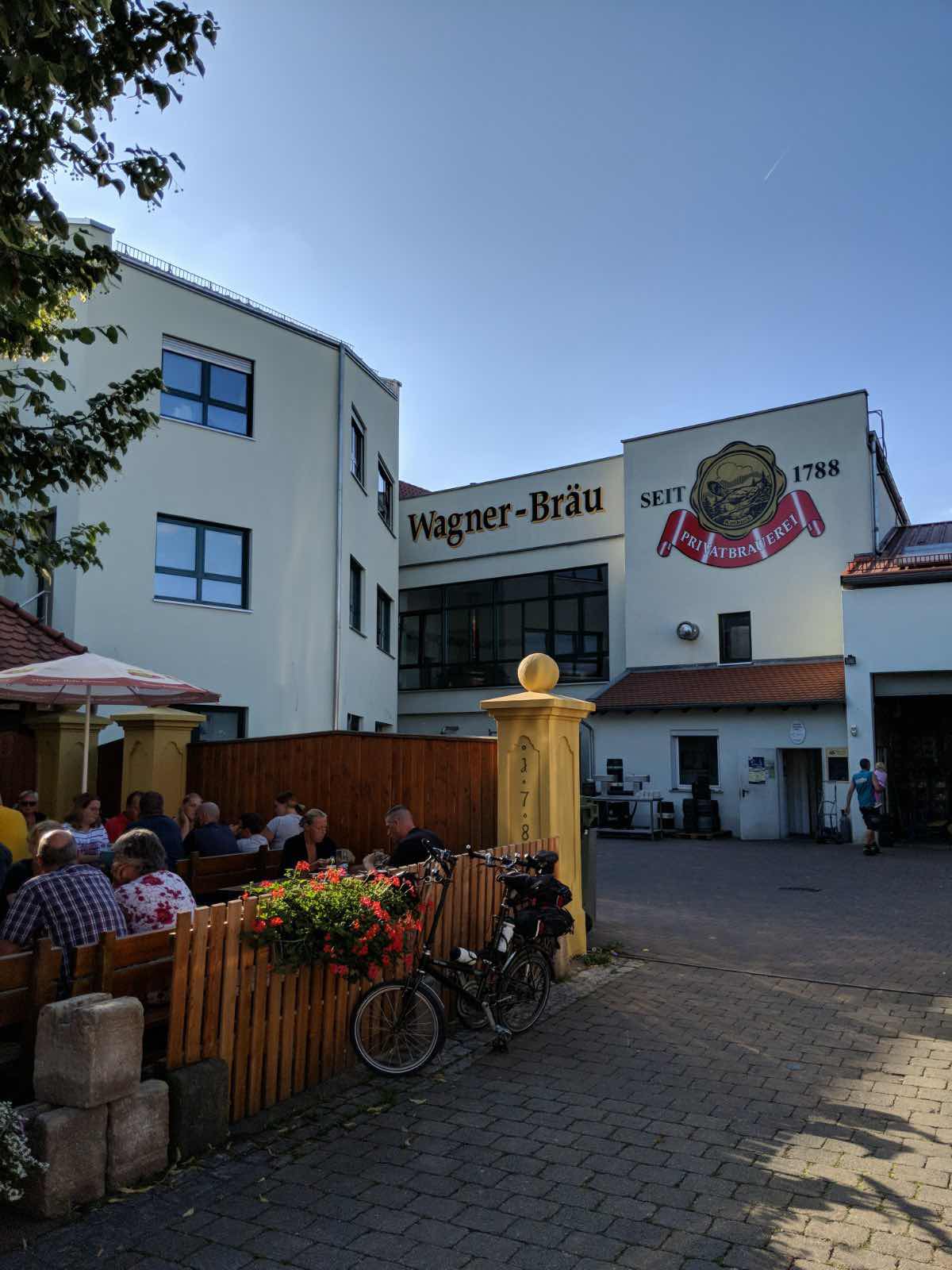 They do a number of good beers here but the Pils is my favorite and it did not disappoint. 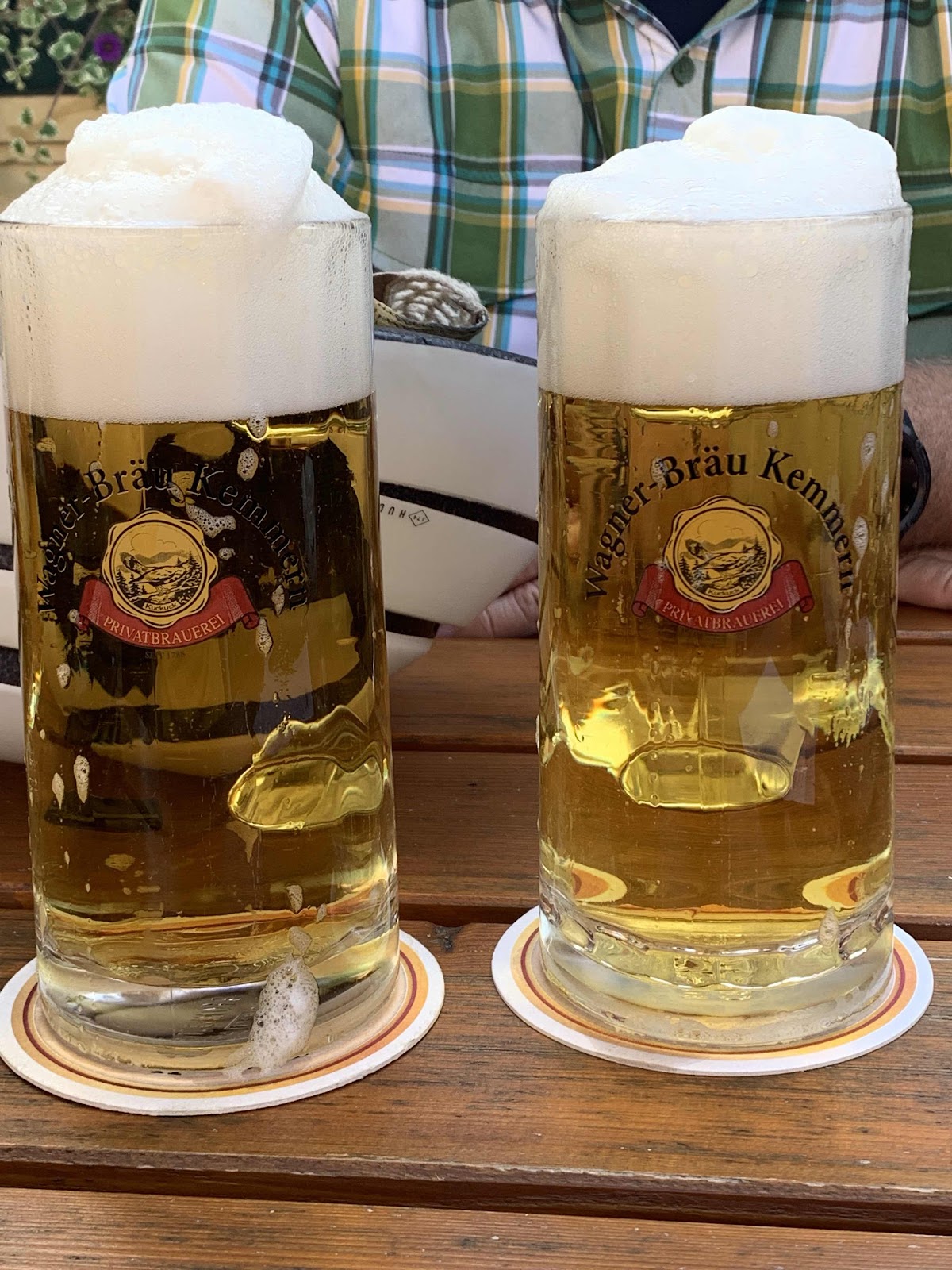 It was getting close to dinner time so we decided to have a Schnitzel, which also did not disappoint. Another Pils to wash it down then it was time for the ride back to Bamberg. 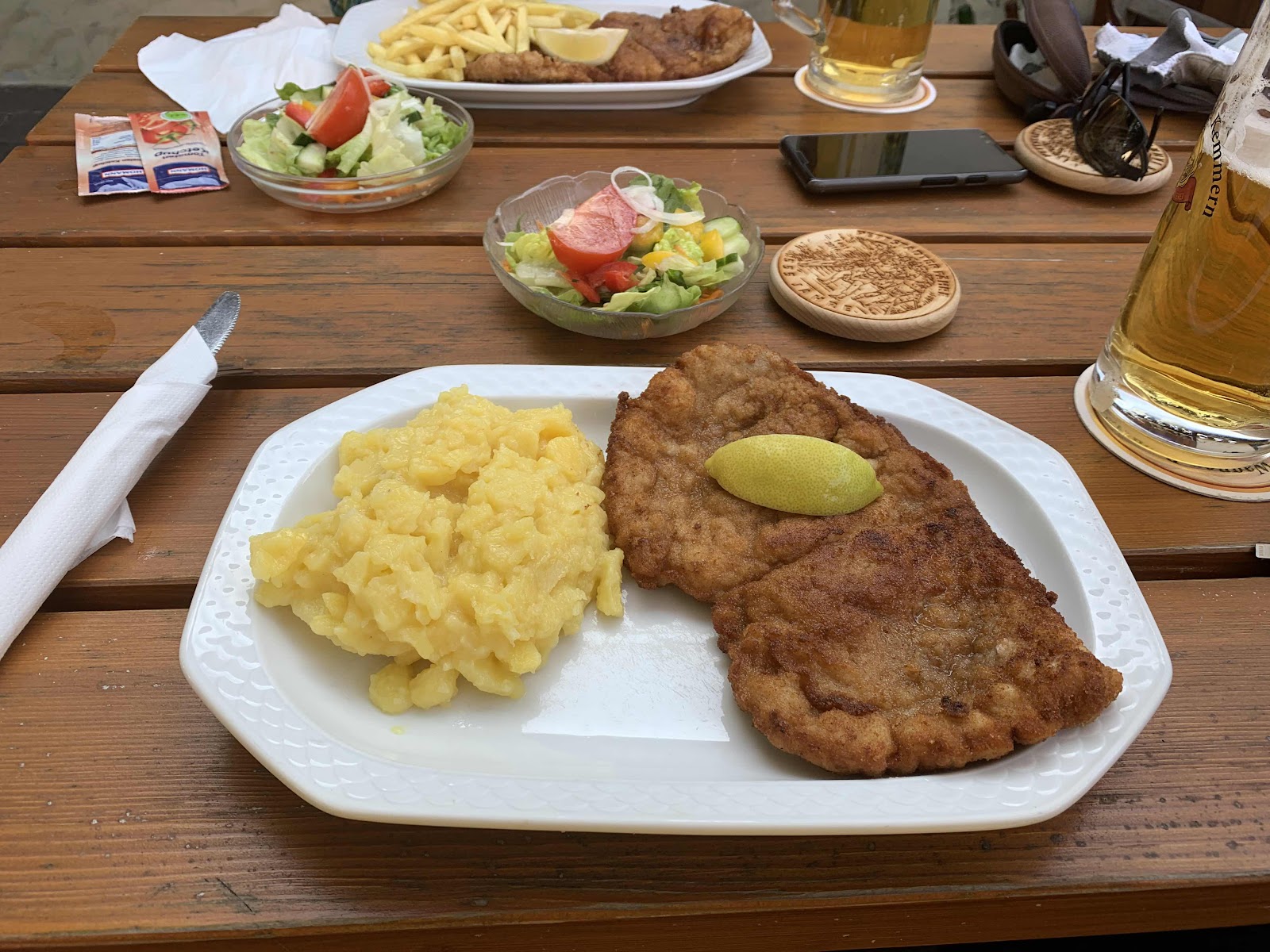 Because of construction and some detours the route was a little longer than planned but with the weather and the beer it was a glorious day. Just a tad over 50km