We met at the Bamberg train station at 10am to catch a local train to Würzburg, to catch the high speed intercity train to Düsseldorf. Würzburg is probably the most hated station in Germany with our group -- they have no elevators or escalators and often you have a very short connection. We actually took an earlier train than the schedule recommends in order to have more time. Thus there was time to pose for pictures. 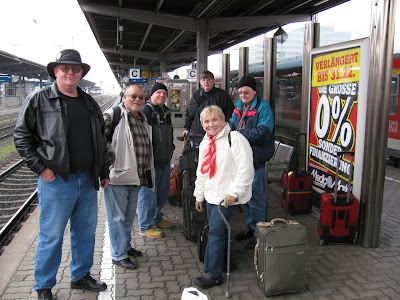 Clockwise from left: Jim, Luis, Bob, Dennis, Paul and Ruth
The ICE (or InterCityExpress -- yes, they use English) are the high speed inter city trains in Germany. On the run between Frankfurt and Cologne they reach speeds of 300 kph and more. 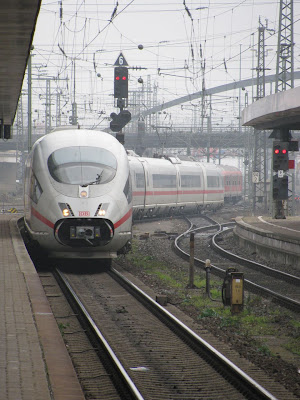 Our ICE to Düsseldorf

It is a short subway ride from the Düsseldorf Main Station to the Altstadt where our hotel and the breweries are. After dropping our bags it was off for that first altbier at Obergärige Hausbrauerei zum Uerige... 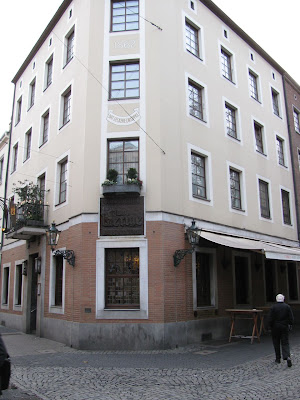 Uerige -- the center of the beer universe in Düsseldorf

I could wax poetic about this beer but I would loose the three readers I still have, so I will just show you a picture of the nectar of the gods... 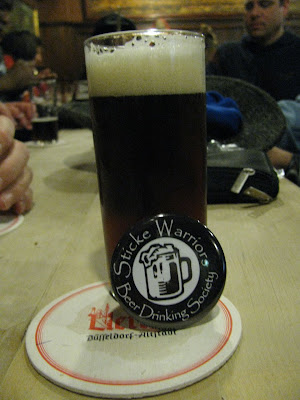 Poetry in a glass
The rest of the group slowly wandered in. In recent years Uerige has added a soup of the day to their menu. Today's choice was lentil soup with a big hot dog (though they didn't call it that). For me, any meat is just an excuse to spread some of the great A.B. Bergrath mustard they service in all the breweries here. One of the wandering food vendors walked by with Frikadellen -- a fried meat ball (of undetermined orgin) with garlic, parsley and other spices. Slather it with ABB mustard and you have heaven on a plate. 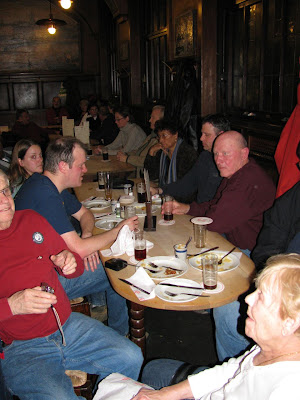 The group drinking at Uerige 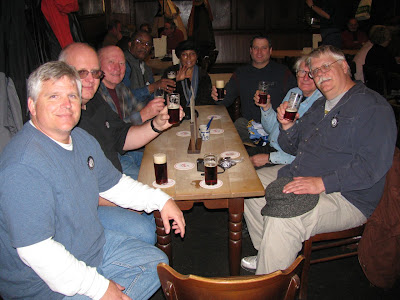 More people drinking more beer at Uerige
This is the 11th Sticke Warriors trip and we've never had two people with the same name on the same trip. That record was broken this year when we have two men named....

Luis
It is the last name I would have expected to be a duplicate. Even more of a coincidence, one is Mexican-Italian and the other Italian-Mexican. You'll have to ask them which one is which! 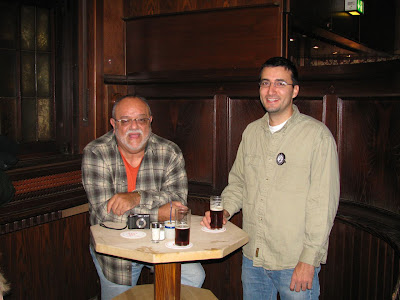 The Two Luis's
We had dinner reservations at Brauerei zum Schüssel at 7pm. Right across the street from there is a tap room of Brauerei Schumacher. The actual brewery is on Oststrasse near the train station but since the Altstadt is the heart of the nightlife in Düsseldorf they have a tap room there. So we decided to stop for one before dinner. They had their outdoor heaters on and the inside was crowded (and we were only having one or two) so we stayed outside. Düsseldorfers love to drink outside and many places had heaters. 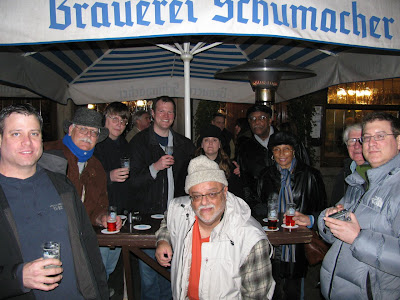 Next it was dinner and beers at Schlüssel and for most it was then to bed. A few of us hardier ones walked over to the fourth brewer, Brauerei im Füchschen for a final beer to "drink for the cycle" as it were.
Posted by The Mad Brewer at 1:40 AM