First just a housekeeping note: You have seen one post from lewbrew -- that is someone traveling with our group. You may also see reports posted by Zymurgic who is also drinking beer and traveling with us. I'll let them identify themselves, if they want.

I will let you know the the two "lost souls" who got delayed did in fact arrive today as did our regularly schedule arrivals. So welcome to Tom Rierson and Dave Lasdon of LA, Paul and Ruth Waltman of Atlanta and Jim Blackmore of Sault Ste. Marie, Ontario.

We started off the day, beerwise, with a walk to Cafe Abseits on Pödeldorferstrasse (basically on the other side of the train station). It was lightly snowing and the wind was picking up so it was a very bracing walk. Cafe Abseits always has a good selection of local bock beers during the bock season.

Just as we were getting settled, Gerhard Schoolmann the proprietor came up and said hello and suggested an experiment: He had just found a bottle of Katrin-Bock from Brauerei Grasser in Huppendorf from last year. Since he had this year's version as well it seemed a good idea to compare them. Now we do this all the time with Belgian beers and some strong British and American beers but its not often done in Germany. Both beers clearly were brewed to the same reciepe. The hops had mellowed quite a bit on the 2007 while in the 2008 version they were still quite crisp. There was some oxidation in the 2007 but much less than I would have thought for a filtered beer -- must have a good bottling line in Huppendorf! We all liked the older version but Gerhard didn't -- I think the oxidation put him off. When you are used to drinking very fresh beer it can be difficult to change gears and look past the faults in aging to enjoy the underlying beer.

On draft and my first full beer was the Nankendorfer Bock from Brauerei Schroll in Nankendorf, which was dark and rich and just the thing to warm you up after a cold walk. Luis also had a Nankendorfer while Jack had a Mönchsambacher Lager from Brauerei Zehender while Andy had the Huppendorf Vollbier from the same Brauerei Grasser. Gretchen is a wheat beer fan so she tried the Weizenbier from Grasser. All these were on draft.

Those went down way too quickly so soon we needed more beer and turned to the bottle list. Gerhard recommend the Haberstumpf Hopfenbock from Brauerei Haberstumpf in Trebgast. It came highly recommend to me from people at the recent "Best of Bock" tasting at Der Pelikan in Bamberg. That version was on draft and unfiltered and we had to make do with the bottled version, which lived up to its name with noticable hops. I can imagine how good the unfiltered version ones. We also had the Hummel Weihnachtsbock from Brauerei Hummel in Merkendorf and the Rossdorfer Bock from Brauerei Sauer in Rossdorf am Forst. The Hummel bock was dark and very malty while the Rossdorfer was pale and quite crisp and hid its alcohol well.

Gerhard soon came over with another bottle and a wheat beer glass. What he had for us was the Hummel Weizenbock and this beer was amazing. Most weizenbock beers I've had tend towards Schneider Aventinus or Mahrs Der Weisse Bock -- a bit darker and heaver than a regular weizenbier. The Hummel Weizenbock was pale and in the glass looks as any Bavarian wheat beer does -- lots of big white head. The beer itself quite tart and acidic but very refreshing. The higher alcohol was noticable but did not get in the way. This is a beer I could drink lots off. Sadly he didn't have very many bottles so we could only drink the one.

With that, we decide it was time to leave and the bock beers were adding up and we needed some cold air get us moving again. 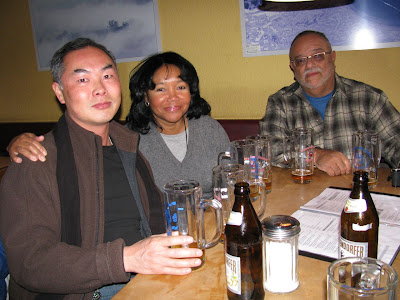 Andy, Gretchen and Luis at Cafe Abseits
We got back to Brauerei Spezial and discovered that our lost travelers had finally arrived. That called for celebration so we all sat down and had a beer or three. 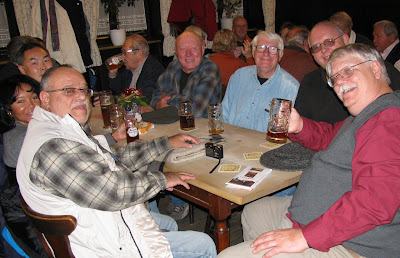 Clockwise from right: Luis, Gretchen, Andy, some guy we don't know, Jack, Tom, Jim and Fred
We had booked a table for dinner at Fässla for dinner that night, at 6pm and it was getting close to 5pm. I wanted to go to Klosterbräu to reserve a table for Saturday night (when your group has grown to over a dozen you can't just show up and expect to find a table). A quick walk over there gave us time for just one Klosterbräu bock: As is usual with their bock beers, it was pale and deceptively strong. You could easily drink a couple and not realize how strong they were until you tried to stand up :)

Dinner at Fässla was very good though they were short on waitstaff so it took a while to get our orders in. I never used to eat at Fässla because the cigarette smoke was too thick but with the new smoking laws I there often when I am in Bamberg.

After dinner it was a quick walk down to Schlenkerla for a night cap and then back to Brauerei Spezial and to bed.
Posted by The Mad Brewer at 9:08 PM