It was quite nippy when we arrived in Bamberg, about 11:30am. After a bracing walk to Spezial, we dropped our bags in our rooms and went down for lunch. One of my "tricks" for overcoming jetlag is to try follow the same meal patterns at home -- in this case a smaller meal for lunch and a bigger meal for dinner (I know, I know not the best practice but its what I am used to). That was may plan here, but after the waitress waved platters of food under my nose (on the way to the neighboring table, that is) I realized I was really hunger and so had a Schweinesteak. Luis had what looked like chunks of pork in a beer and onion sauce. Both were delicious.

"How as the beer?" I hear you ask. This is Spezial, it goes without saying it was very good. I had the Lager, Luis the "U." For desert I had the Bock and I have to say I was disappointed. It was nicely malty to start, but there was a harshness in the finish that Luis thought was a conflict between the smoke and the bittering hops. I couldn't come up with a better explanation, so that is the party line. I had asked the waitress to take a picture of us drinking that first beer, but I only had my iPhone with me and I think it confused her the picture was very blurry, so you have to settle for a picture of the Spezial Bock. 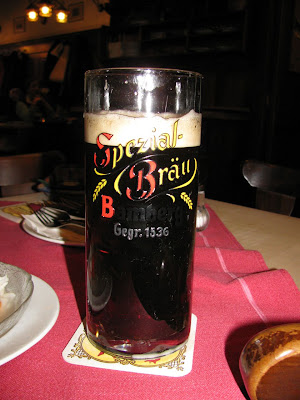 Spezial Bockbier
After lunch, we popped over across the street to check on the hotel reservations at Fässla. Of course, it would have been impolite not to have a beer as well, so we drank a Pils. I do say I love that beer. Crisp and clean it went down way to fast.

We decided to head towards Schlenkerla, taking it easy and checking out Chistmas Market in the Maxplatz. The Christmas Market was pretty much their regular outdoor market, with stands selling clothing and household goods, with all the booths decorated for the season. There were booths selling Christmas ornaments and seasonal stuff and all the food stands had Christmas slant to them, including the obligatory Glühwein. At the far end was a large stand selling lots of different Christmas punches and I noticed a sign "Glühbier" -- that sounded interesting!

It turns out to be Liefmans Glühkriek from the famous brewery in Oudenaarde, Belgium. A draft Belgian Beer, made with fruit, in Germany, served warm even. What is the world coming to?

And it was even served in a proper glass! 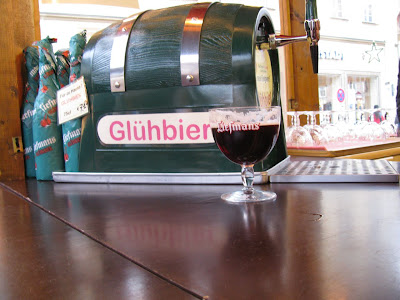 After that, we wandered over to Schlenkerla. Even though it was a weekday afternoon, it was much less crowded than I expected. Then I realized that they'd always been closed on Tuesdays and there are probably hundreds of guide books out from over the years that say "Closed Tuesday" so all the tourists just skipped it. Anyway, business was so light that the window in the Schwemme didn't even have its own keg! The bartender had to go over to the restaurant side to fetch our beers.

Anyway, we had the "normal" Schlenkerla (they call it a Märzen) first and it was a it always is, more aggressively smokey than Spezial and quite delicious. And since I've be criticized in the past for showing too many pictures of beer and not enough of people, here is Luis and I enjoying that first Schlenkerla. 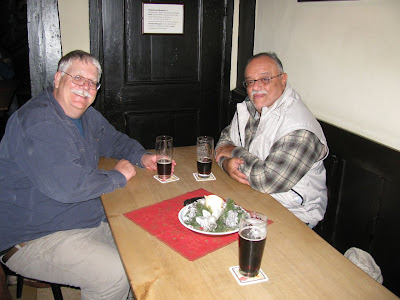 In the Schwemme at Schlenkerla

Of course, I had to try the bock as well. It was they same as always, a bigger, stronger version of the Märzen. After that, the jetlag started to kick in and we decided to head for home. On the way I got a call from Andy and Gretchen Chang, who had arrived that afternoon after starting their trip in Berlin. They were in their room at Fässla and were ready for a beer and something to eat. So we met at Spezial where I had a light dinner, one more beer, and practically fell asleep at the table. So I bade them a good night and headed upstairs to my room. I was so tired I even forgot to take pictures.

Tomorrow a big wave of people arrive -- 5, included the two delayed from today.

Updated: Spelling Corrected.
Posted by The Mad Brewer at 9:04 PM

Glad your blog has come alive again after 8 months. But it seems all the Bock has impaired your sight and your writing abilities. Even with a photo of glass and bottles you still manage to misspell krIEk and LIEfmans.
And another remark, why is there no link to your other blog ?

Spelling has been corrected. I have trouble with "ie" and "ei" in all languages, even when sober :)

This is the first purely beer trip I've made since March, so that is why the hiatus.

See you in Essen.