Last night the concierge at our hotel told us she has lived in Firenze for 20 years and has only seen it snow once. As of this morning, make that twice. Under overcast skies and bitter cold temps, there are snow flurries for about 30 minutes in Piazza d. Signoria!

We make our way to the massive Duomo, one of the largest cathedrals in Europe. Even the widest of wide angle lenses can't capture this structure in one shot; below is what I could get with the iPhone camera. 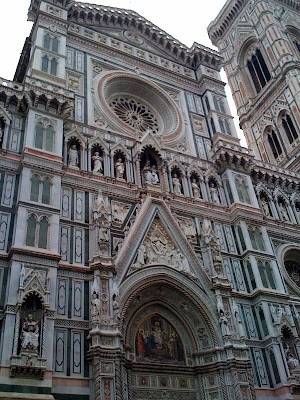 After admiring the Duomo, its Baptistry and the 419-step bell tower from the outside and checking out the nearby shops, we duck into the big church when it opens for visitors -- as much to escape the cold as to appreciate the design from the inside.

Next is lunch at another local pizzeria, where I order a calzone that turns out to be the size of Monaco, and, of course, the ubiquitous Moretti alla spina. 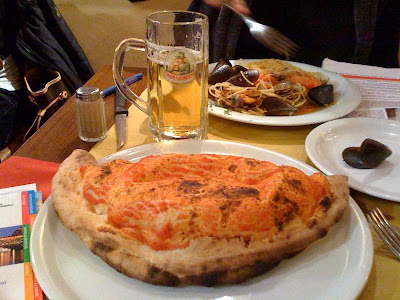 We plan to hit some museums, but this being Sunday, as well as the Xmas period, they are closed or close earlier than our guidebook indicates. One closed 10 minutes before we arrived.

We continue wandering this gorgeous city where even the simplest stuctures are architecturally interesting and soon cross the River Arno on the legendary Ponte Vecchio (a bridge onto which houses and shops have been built) to the San Spirito district and walk to the first Firenze brewpub, Il Bovaro ("the cattleman," as well as a breed of dog, the image of which is the biriffico's logo).

We order half-litre sizes of the 3 beers alla spina: Riki, a 4.5% cereal-malty Blond (birra chiara) with a latent fruitiness (apparently the house favorite, and ours as well; we each order a 2nd); Titan, a 6.3 dark birra rossa (red beer) that is very malty, mildly spicy with a curious tartness; and Nera, a 6% dark ale served in an imperial stout glass with stout-like characteristics (caramelly, roasty). Axel, a strong Blond (7.1%) was unfortunately out. 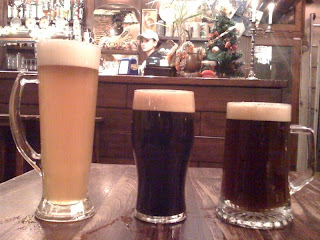 These beers are only available on draught at this pub, which opened in 2000.

One of the owners-brewers/brothers, Daniele Venturi, drops by before we leave. I leave him a copy of The Celebrator. He does not speak English, but one of his waitresses (seen behind the bar in the photo of the 3 beers), fortunately does and translates as we discuss birra, the brewpub and the late beer writer John White as best we can, and snap some pix.

Tired and tipsy, we bid Daniele arrivederci and taxi back to our hotel. It's great to finish the day/night with birra buona... 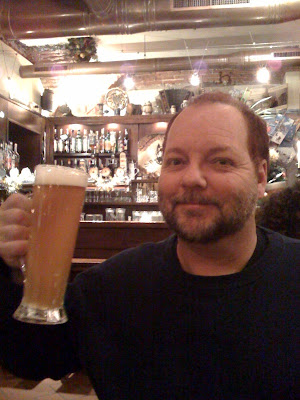