In the Christmas Market was a stand that sold hot mead. I've seen this at a few German beer festivals. This was just a straight mead, no spices or fruit. It would have been better with some spices. 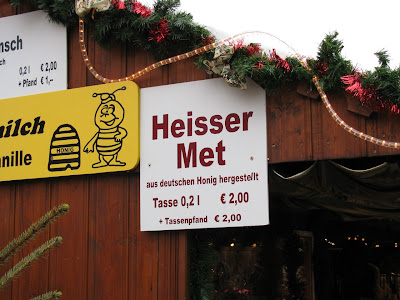 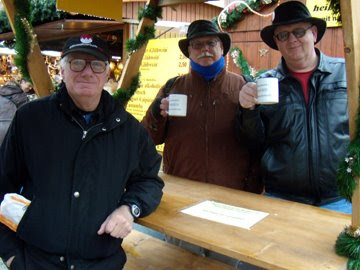 Tom watching Fred and Jim drink mead
We then headed back over to Cafe Abseits. Each Friday they have a new beer on tap and this weeks selection was the Griess Bock from Brauerei Griess in nearby Geisfeld. Peter Griess the brewer has a reputation for liking hops and and his bock beers are no exception. 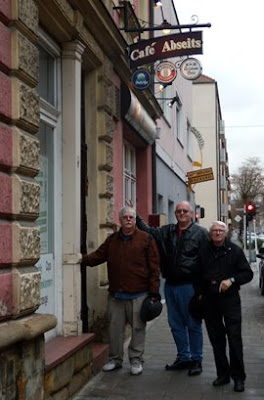 Fred, Jim and Tom about to start drinking at Cafe Abseits

Drinking beer is much like any excersise -- you want to warm up so you don't strain a beer muscle. We started off with a few of the their regular draft beers, Mönchsambacher Lager and Huppendorfer Vollbier, a Griess bockbpbier, and a special beer from Georg Scheider in Kelheim -- Schneider 1608. This was brewed for their 400th anniversary and is a slightly stronger version of their regular weizenbier. It is very good -- so good that Gerhard Schoolman (proprietor of Cafe Abseits) bought as many cases as he could. 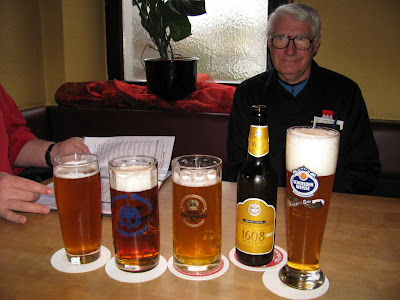 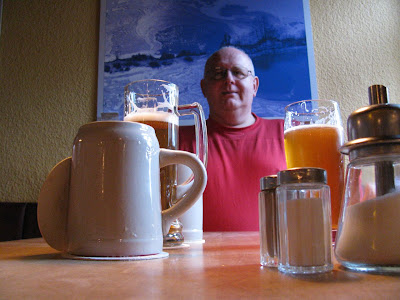 Jim likes all he sees
Round two was mostly bottles: Huppendorfer Kathrein Bock, Hummel Weihnachsbock (which we tried in the earlier session) Weiherer Bock from Brauerei Kundmüller in Weiher, the lightly smoked Fischer Bock from Brauerei Fischer in Greuth and another Greiss Bock from draft.

Along about this time my parents and brother Dennis arrived with my youngest brother Bob, who is making his first trip to Bamberg (and to Germany). We decided to do a round with Weizenbock and ordered a Scheider Aventinus -- the gold standard of Weizenbock, a Weizenbock from Brauerei Gutmann (south of Nürnberg) and the Weizenbock from Brauerei Hummel in Merkendorf. Earlier in the week I though the Hummel Weizbock was outstanding, but this time it was overshadowed by the Aventius. Its no shame to lose to a beer as good as Aventinus. 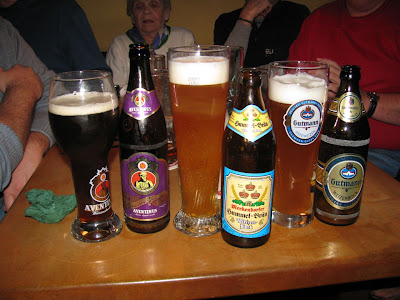 Schneider Aventinus, Hummel Weizenbock and Gutmann Weizenbock with Ruth Waltman in the background.

Herr Schoolmann then brought out a special treat -- the Weihnachtsbock from Brauerei Zehender in Mönchsabach. This beer has not been officially released yet, but Stefan Zehender, the brewer, had dropped off a few bottles for us to try since we wouldn't be where for the official release. It by far was the best bock I have tasted in a long time -- lots of malt but not too sweet and enough hops to know they were there. He also gave us a few bottles to take along to Belgium. 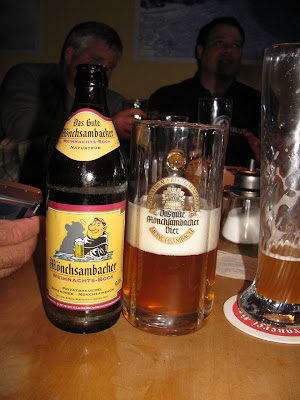 Mönchsambacher Weihnachsbock
After all those bocks it was time for a short nap before we all met for dinner at Klosterbräu. 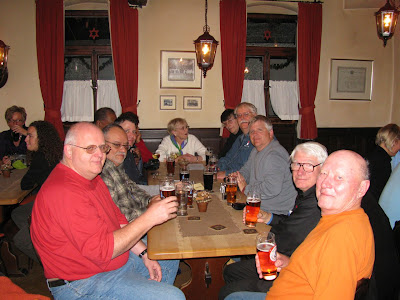 Dinner at Klosterbräu, a lot of Schnitzels gave their all for us

Update: corrections made, hat tip to Gerhard Schoolmann of Cafe Abseits.
Posted by The Mad Brewer at 10:27 PM