The weather Tuesday was much as it has been the whole trip -- grey and overcast. 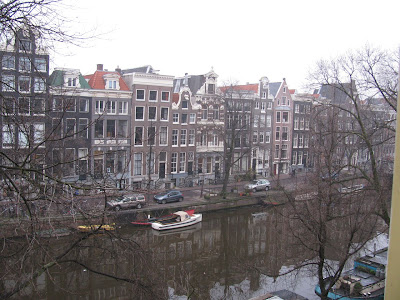 View of the Singel from our hotel room
Last year while walking around we found a Chinese restaurant lots of delicious looking meat hanging in the window. After a couple weeks of Schnitzels and Haxen (and frites and stoofvlees) a break for Chinese food sounded good, so we heading down Zeedijk to Wing Kee Chinees Eethuis for a bowls of noodles with sweet pork on top and half a Peiking duck. Yum! 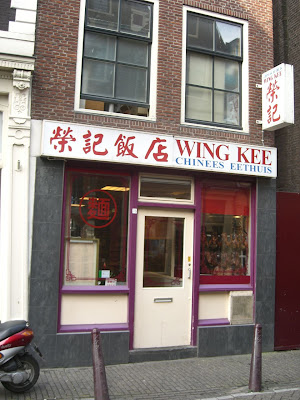 Wing Kee on Zeedijk
On the way back from lunch we passed right by In de Wildeman, so of course we had to go in and say "hi" to Simon and have a beer. I noticed they had bottles of the new Steinbier from the large Franconian brewery Leikheim (though the bottle is labeled as coming from "Brauhaus Altenkundstadt"). Luis had the Budweiser Budvar Dark Lager and Tom stayed traditional with a Budels Bock. 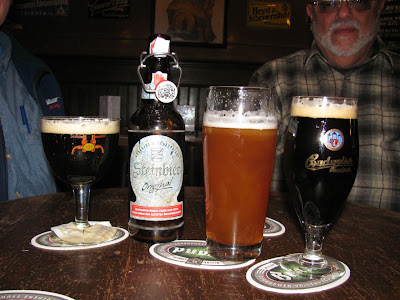 Budels Bock, Leikheim Steinbier, Budvar Dark
The Budvar was almost too roasty -- practically, but not quite to the level of "burnt" tasting. The Steinbier was interesting for about the first half a glass but it became too cloyingly sweat and I had to struggle to finish it. The Budels Bock was as you would expect a Dutch bock to be.

We had agreed to meet at 't Arendsnest at 4pm when they opened and it was about that time so we wandered over. On the way, we met Luis the Younger and his father (who lives near Rotterdam) and went in for a beer. 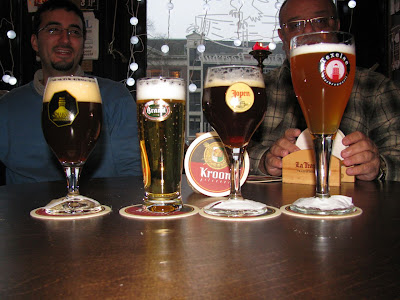 Two Luis's and Four Beers -- a good ratio?
Round one was a SNAB Pale Ale, Brand Pils, Jopen Koyt and a Texels Triple and... 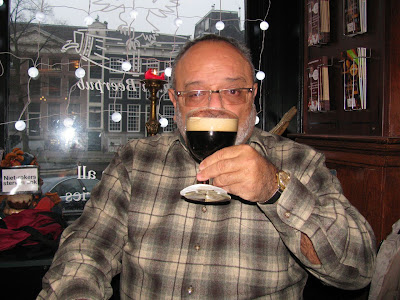 Luis the Elder and his Jopen Extra Stout
It was all downhill (or uphill I guess, depending on your orientation) from there on... 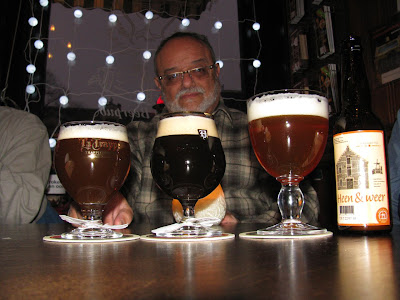 Somewhere along the line Theo Flissebaalje (from Utrecht) joined us. He was in town for the release of a new book on Amsterdam pubs, but the author (who is English) had his flight grounded and so the event was postponed a day. He had a few beers with us and then had to catch a train back home. 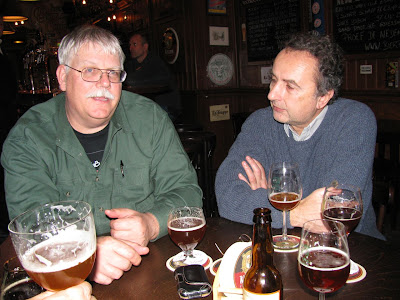 Fred & Theo discussing beer.
Theo recommended a beer from Brouwerij de Eem in Amersfoort (but actually brewed by De Prael in Amsterdam). It was good, but I didn't write anything so I can give you any more info. 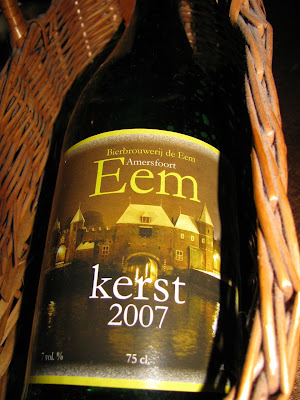 De Eem Christmas Beer 2007
The De Molen Heen & Weer was so good, we decided to try the two other beers on the beer list. First up was Pek & Veren ("Tar & Feathers") a stout brewed with some peated (smoked) malt. Very nice! 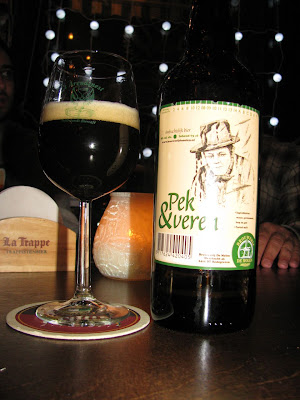 De Molen Pek & Veren
And for our final beer at 't Arendsnest, their Imperial Stout, Rasputin 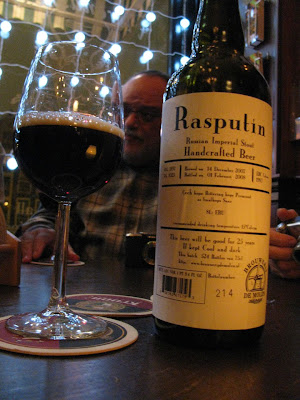 De Molen Rasputin
The name "Rasputin" conjured up for us North Coast's "Old Rasputin" Imperial Stout -- one of our favorite beers. The De Molen version was not nearly as strong and hoppy and the first reaction was less than exciting. But as the beer warmed up, we warmed to the beer. It was a very, very good beer and the fault was ours for letting a name distract us.

All in all, I think De Molen has become my favorite Dutch brewery, an opinion I think is shared by the others in the group. 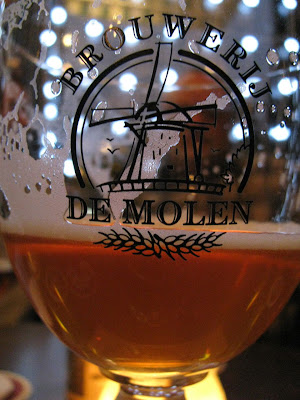 Brouwerij De Molen
Since In De Wildeman had Spezial Lagerbier from Bamberg on draft, and that was my first beer of the trip, we wandered back over to make it the last beer of the trip as well. I love it when things come full circle.
Posted by The Mad Brewer at 4:02 PM