A sunny morning in Milano but things get hazier as we travel 2 hours
and 45 minutes via Eurostar rail to Venezia -- where it is as foggy, and as cold, as an unfiltered hefeweizen. Not that we'll find that exotic of a beer style here. Lorenzo told us we would not find good beer in Venice.

Disembarking the chilly ride on the water taxi at the doorstep of the Hemingway-famed Harry's Bar in Venezia, we dropped in to get warm, get our bearings and get a beer. "We don't serve beer," the white-clad barman sniffed in Italian. So we ordered 2 €7 coffees.

Fortunately, we are not very far from our hotel, Hotel della' Opera, 2
doors from the Opera House. Open for only 6 months and remodeled from a private residence, the hotel has 15 rooms. Ours, on the 3rd floor has vaulted ceilings, windows on all 4 sides and 2 sets of French doors leading to a terrace. True, it looks across an alley street
onto another residence, but then, this is Venice..!

After a brief power nap, we head out for a late dinner -- to the
next door restaurant, Vino Vino. Despite it's name, we order birra,
birra with our pesce and pasta dinners. Mainly, because it was one I'd
never heard of before: Pedavena (see photo below).

A dark golden lager, it was maltier than the other industrial Italian
beers, but brewed with a maze adjunct. Not horrible. Next time, I'll
go for the vino. 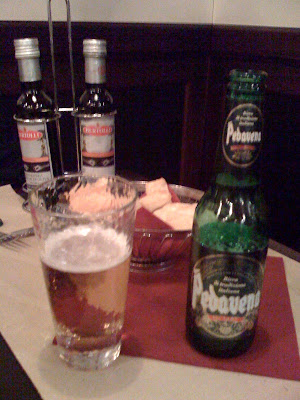