Man, this drinking bockbier is hard work! No time for words again, just some pictures and I'll update as time permits...


One of the privileges of membership in the Fränkisches Brauereimuseum is every Sunday morning they have a great German tradition -- Frühschoppen -- which in this cases translates to "early drinking." They have either a keg or a few cases of beer donated by one of the member breweries and they supply fresh pretzels. Everybody gets together and talks about the problem of the world, and of course, drinks beer. Tom and I are both members so we brought Luis and Bill along as guests. 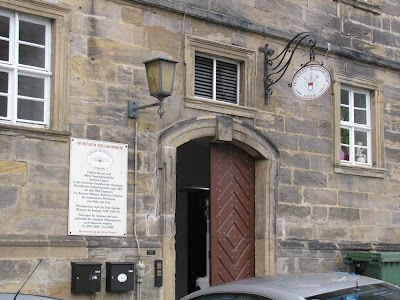 Franconian Brewery Museum at the top of the Michaelsberg 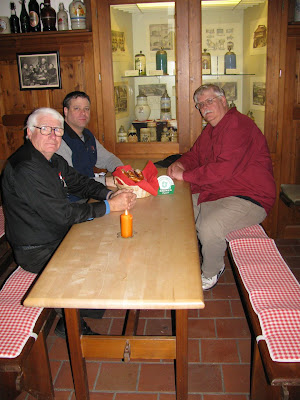 Tom, Bill and Fred waiting for the keg to be tapped.
The beer this time was the Lagerbier from Brauerei Krug in Geisfeld. This brewery doesn't bottle (but they do have 5 liter "party kegs" which is welcome news). So it is a treat to get without having to visit Geisfeld. 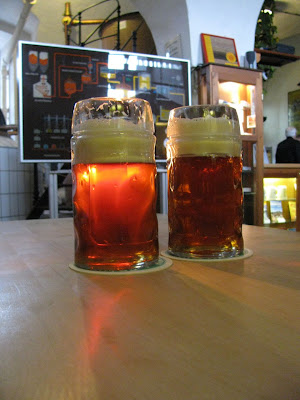 Krugbräu from Geisfeld
They also brought some interesting foreign beers: A nice Bavarian style wheat beer from Brasil, really intensely chocolatey porter from a different brewery in Brasil. A Belgian style tripple from Italy, an ordinary German style lager from Thailand and Cave Creek Chili beer, which is now brewed in Mexico for an American beer firm. The first three were good, the Thai beer fairly uninteresting and nobody opened the Chili Beer. 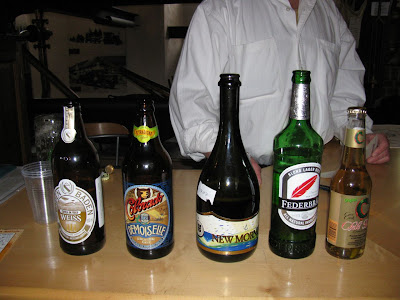 Beers from around the world

Next stop was Schlenkerla for lunch and a couple of beers. We were a little late and the group already had a table, but it was full so we grabbed another. It was a good thing because we got our lunch very quickly but their order was lost by the kitchen and by they time the complained the kitchen was closed. Not a good move when there were a couple of bloggers at the table.

Not having eaten, we adjourned to Stilhruch, a nice pub about half a block down the Sandstrasse. They have very good pizza and burgers and every Sunday they tap kegs of the Landbier from Brauerei Hübner of Steinfeld -- also know as "Ottobier" after the former brewer Otto Hübner. Otto retired a few years ago and his nephew took over the brewing. The beer had gone downhill a bit but I think think the nephew is getting the hang of things as this time it was much better.


In our travels we had missed the only modern style brewpub in Bamberg, Ambräusia.num, so in order to touch all the bases we stopped for a quick double bock "Ambräusiator". It was a bit too sweet for my tastes. I usually have the wheat beer, but Tom had tried it early and found it very bland. 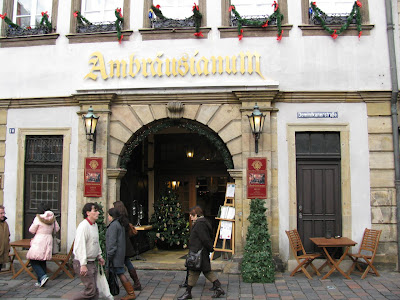 Ambräusianum, Bambergs brewpub
We had a dinner reservation at Spezial at 7pm, but on the way back over the Obere Brücke we noticed a sign that said "St Georgen Bock" so of course we had to stop and try one. 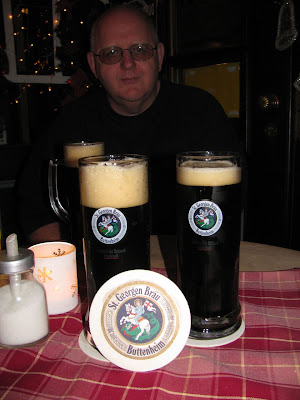 St Georgen Bock from Buttenheim -- with Jim in the background

We had a dinner reservation at 7pm at Spezial and invited some of our local friends to join us. 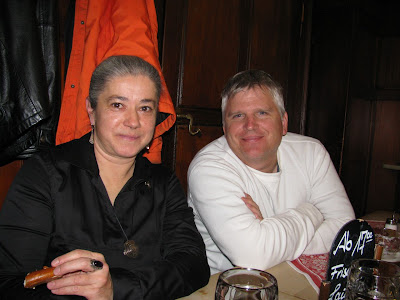 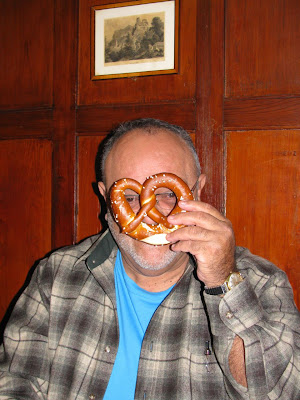 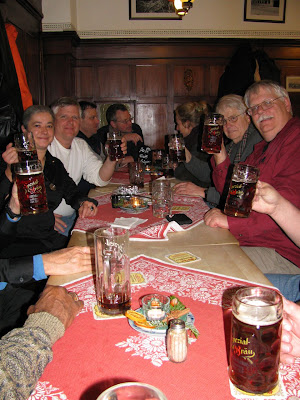 The gang after dinner 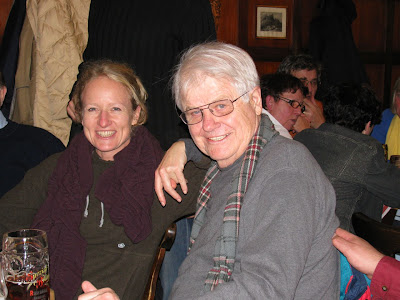 Alexandra and Paul
Posted by The Mad Brewer at 11:31 PM