...a Tutta Birra is Milano's premier (and likely Italy's only) serious beer emporium, akin to Beer Mania in Brussels or Bier Köenig in Amsterdam. It is a tiny shop, maybe about 15x20 feet tightly packed with Italian craft beer, as well as great offerings of Belgian (especially Xmas), German, Dutch and British beers (and curiously, some Anchor and Brooklyn Brewery wares). Beeraphernalia too, from half-yard Kwak glasses to 9-litre St. Fuillen jeroboams to Guinness flip-flops.

Owned and opened in 1995 -- just as Italy's birra artiginale movement was being born -- by Lorenzo's longtime friend, Flavia Nasini, arguably Italy's first lady of beer -- the shop, just off Buenos Aires, is patronized by beer fans throughout the country.

With Lorenzo's recommendations (and discount -- Grazie!) we buy a half dozen tall bottles of Italy's finest, including some from the purveying birrificio, Baladin.

Pictured below are a few of them (that we took to Venezia with us for Xmas), including a beer from Italy's only brewing monastery (2nd from right). Who knew? 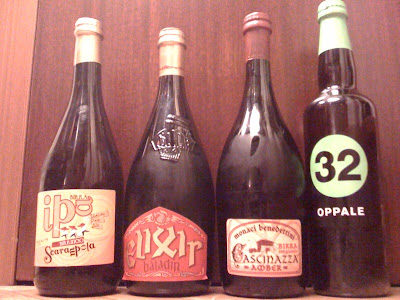 Massimo and Fausto deliver some of their Maltus Faber beer, already prominently displayed, to a Tutta Birra, and then we are off again -- this time driving to La Ratera, a bier á cuisine restaurant on Milano's east side, named for the rodents that once populated the area.

The place does not open for an hour or so, be we leave more Maltus Faber brew with the chef, who brings a plate of fine Parmesan for us to nosh on while we sample the 3 beers from Birrificio Italiano, near Como, on draft: the award-winning TopoPils, the caramelly yet clovey dunkel weizen Vûdû, and the fruity BiBock, made with apricot. Non-Italian beers sharing the taps were Blanche de Namur and... Anchor Steam!

No time to wait til the restaurant opens as Lorenzo has an Xmas beer tasting to conduct, and a preceding dinner, at, of all places, Mulligan's Irish Pub.

Flavia, her husband and Lorenzo's webmaster join the rest of us at the beer guru's table in the private downstairs room at the pub for dinner (pasta, not corned beef). The 60 or so tasting class attendees, men and women in their 20s & 30s, fill the rest of the room.

The tasting consists of only 3 beers: full pours of Maltus Faber's Birra di Natale (medium bodied with that estery Belgian yeast), Binichoise Nöel 08 and Stille Nacht 08, plus of much talk and description from Lorenzo as well as comments from Fausto and Massimo -- all in Italian of course. Plus a little bit of English for the monolingual Americanos' sake.

The tasting ends after midnight and Danise and I offer Lorenzo mille grazie, bid all buona notte and cab back to the hotel after an amazing crash course in the Milano beer scene. 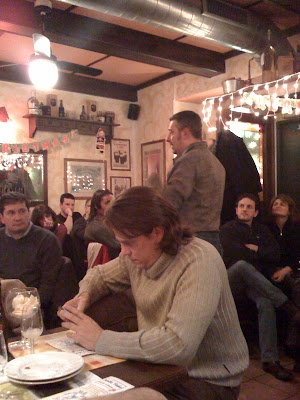 Submitted by Tomm Carroll
Posted by The Mad Brewer at 5:50 PM