The winter solstice, the shortest day of the year, and we watch the sun come up as we fly over the Alps into Milano's Malpensa Airport.

It's a bright, sunny if brisk day (and a welcome respite for Italy from the 3 weeks of straight rain they've had, let alone finally some good timing on our part) as we train into the city. One subway stop from the train station, Stazione Cadorna, and we are a block from our hotel, the London.

After settling in and resting a bit, we head out into the Xmas shopping bustle as we are just a block off of Via Dante, a walking street/promenade full of shops and street merchants.

A quick stop at Farinella, a decent trattoria chain, for some lunch of pasta, whitefish and veggies. And our first birra on Italian soil. Sadly, it was just Nastro Azzuro, the "premium" version of industrial brew Peroni (kinda like what Michelob is to Budweiser); clear, crisp and characterless. Clearly, good beer must be sought out in this country.

We decide to get a quick overview of the city by taking one of those CitySightSeeing tours atop an open-top double decker bus. While awaiting the bus to arrive at the Castello Sforzesco, a castle-like fortress originally built in the 14th century, I buy a beer from an outdoor kiosk I never had before: Ceres Strong Ale, a 7.7% malty golden beer from Denmark.

And sure enough, as soon as I open it, the bus arrives so I bring it on board to fortify me against the open air as we breeze by the likes of the magnificent Gothic cathedral, il Duomo, and the stately La Scala opera house as early dusk settles and the the Xmas lights alight in the city. Priceless.

Then the jetlag hits, more severe for me than Danise. After wandering around the synchronized lights and Xmas songs display at the Castello, I stumble back to the hotel to crash. Danise comes in a while later with paninis and some birra -- alas, only Moretti -- for a light dinner before we turn in for the night. 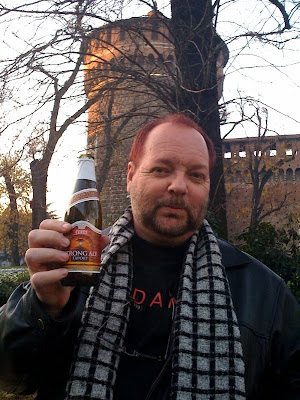 Submitted by Tomm Carroll
Posted by The Mad Brewer at 8:38 AM

Poor Bill Shatner.
Poor Tomm-losing beers at the airport, and crashing, while Danise still energy. Nothing brings on sleep like an interminably long trip, followed by beer and a double decker bus tour ;).
Besides hunting for wild beer (boar?), will you be engaging in any other any other high culture activities? I understand they have some fair to middlin' vocal music with orchestral accompaniment, and costumed peeps at the Opry. Danise, will you be shopping for some designer frocks in Milan? I believe they have some sort of clothing industry in the city.
Keep us posted. I have decided to save my money by not traveling ever again, and will just have virtual vacations by reading my friend's blogs.

If you haven't made it there already, and if you're still in Milano, you must go to the Birrificio Lambrate