We all met at Spezial for lunch, including our latest addition, Sam from LA. He arrived Thursday but we didn't mange to meet up with him then. I had taste of somebody's bock and it was much, much better than the other day. It was quite nice, in fact. I will have to have it again to be sure, though :) 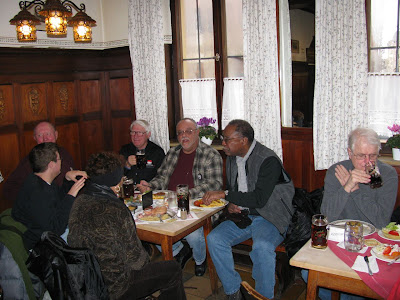 Lunch at Spezial
After lunch the group split: Some wanted to see some culture and decided to walk up to the Dom (Cathedral). I've been to the Dom and the beer selection is severely limited, so I thought I'd pay a visit to Greifenklau up on the Kaulberg. In all the years I've been coming to Bamberg, I've never had their Bockbier. It is released in late November and this is only the second time I've been here in December.

I am also lazy and the Kaulberg is a long, steep hill, so I decided to take the bus. Tom and Jim chose to walk and the rest followed me over to the ZOB, which stands for "Zentrale Omnibus Bahnhof" or "Central Bus Station" but I always think of it as "Zone of Bus." It is where all the city bus lines converge.

We bought tickets and quickly hopped on a Number 18 bus. First it winds its way thru town -- and with a double length articulated bus and Bambegs narrow streets you have to appeciate the skill of the drivers -- and then heads up the Kaulberg. On the way we passed Tom and Jim, but since the bus stop is a little past the brewery, we pretty much arrived at the same time. 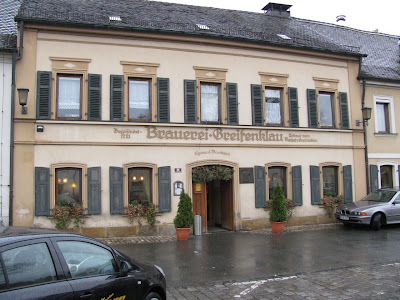 Brauerei Greifenklau
The bock was nice but nothing outstanding. I'm glad I made the trip, but I wouldn't want to walk up the hill again for it.

Since somebody once told me not to just have beer pictures, here is the view of the Bamberg Dom as you walk down from Greifenklau... 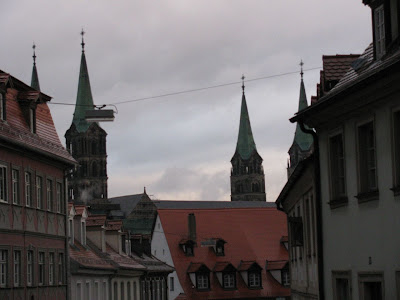 Obligitory non-beer picture
We decided to swing by Klosterbräu as some hadn't been there yet (a problem when everybody arrives at a different time). Everybody had either the bock or Schwärzla (black beer) and everybody was happy. The Klosterbräu bock is just too drinkable, with a dry finish that just says "more, please," The Schwärzla was better than it had been the past few times I'd had it. I haven't had the Braunbier yet this trip -- maybe on Saturday when we go for dinner.

We stopped by our rooms to "freshen up" on our way to Keesmann. I resisted the chance to have another Spezial (or Fässla) but I don't know if everybody had such willpower.

After a nice walk along the Regnitz -- it was drizzling but had warmed up a bit -- we arrive at Brauerei Keesmann. In past years I had found their bock to be one of the better ones in town, and while it was good, I don't think it was up to previous years. Better than the Greifenklau by far, but not quite up to Klosterbräu. Others at the table and the Herren Pils and Weizenbier and all were as expected. 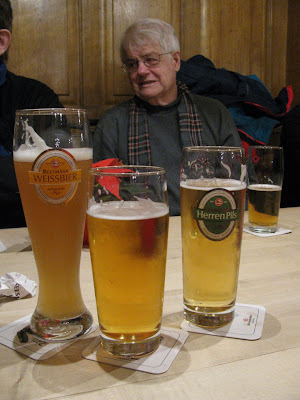 Keesmann Weizenbier, Bock and Herren Pils, with Paul Waltman in the background 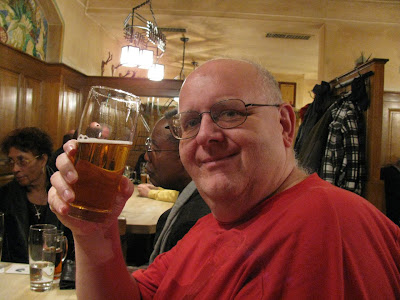 Jim Blackmore and his Keesmann Bockbier
We had reserved a table for 7pm at Mahrs, so it was chug down that last bit of bock and head accross the street. I inititally couldn't find our table but eventually discovered the sign on the big square table that is usually the Stammtisch. The name was spelled in the German fashion, but I didn't complain and it is too hard to explain anyway. 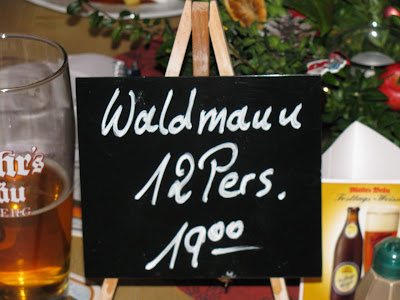 Spelled correctly or misspelled, depending on your viewpoint

I ordered "a U" (one "ungespundet") while the other folks were making their way across the street. I was disappointed to see that they were still serving it in class mugs rather than the stoneware krugs that had been used before. This started sometime this past summer and I had hoped it was just a summer thing, but it looks like its a permanent thing. I don't know if the change in serving container affected my judgement, but I didn't think the beer was a good as it has been in the past.

It turns out this week is "Schnitzel Week" at Mahrs so the dinner menu was limited: Bierhaxe, wurst and sauerkraut and 12 differnent kinds of schnitzel! We orded about 5 different "flavors" at the table and everybody was happy. While we were there, our latest traveler, Bill from New England, joined us for a beer. 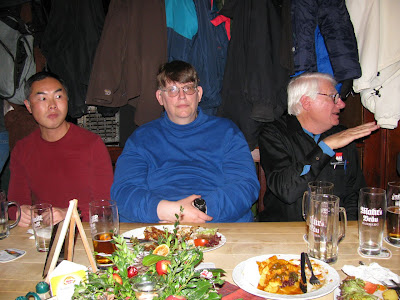 Dinner at Mahrs: Andy, Dennis and Tom
For my second beer I had the bock and was a little disappointed again. It was a bit too sweet, especially in the finish. It was perfectly drinkable, but it didn't leave me wanting another.

We finally staggered off to our hotels and rested up for the next days adventures.
Posted by The Mad Brewer at 11:02 PM