Despite staying up all night carefully packing with 6 beers in the
luggage to give to the Italian beer geeks and brewers, and leaving
early for LAX, Danise and I were met with a humongous line at the
Continental counter.

So long that by the time we got to the check in kiosk., it was too
late to check our bags if we wanted to make our flight. We could
either rebook, but no one could tell us when that would be, or
condense our bags down to 2 apiece to carry on -- and ditch the beer.
Sadly but wisely we chose the latter.

So there they were, 6 bubble-wrapped beers (spiced holiday brews which
the similarly inclined Italians brew , like Lost Abbey Gift of the
Magi, Anchor Xmas, and the new Stone-Jolly Pumpkin-Nogne holiday
beer), left on the bench near the security line entrance to apparently
no ones notice as we headed toward the TCA x-ray gauntlet.
I had visions of a bomb scare in which the LAX Continental terminal
was evacuated over those beers!

By then we were running late for the flight. Fortunately the security
x-ray was fast and comic relief was provided by the sight of poor
William Shatner in his bare feet being hassled by the TSA goons who
would not pass him thru and whisked him away! Shouldn't he be able to
just beam himself thru to the gate?

We got to our gate just as they were about to give our seats to stand-
by folks. Now the irony: There was no room for our bags on board;
they would have to be checked after all! Could I go back and get my
beer? Of course not.

Anyway, our first beers of the day were ok imperial pintsl of Guinness
and Smithwicks at the franchise Guinness Irish Pub in the Newark
Airport.

Not a very auspicious start for our beer trip. Things could only (and
did) get better... 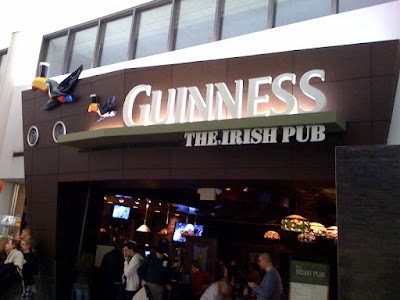 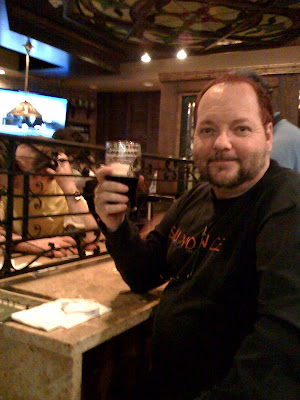 Submitted by Tomm Carroll
Posted by The Mad Brewer at 8:24 AM