Sunny but cold as we head off to more Venice landmarks on San Stefano's Day; sites are open again.

We visit the Pallazo Ducale, the pink-and-white Gothic-Reniassance center of the "doges" (elected-for-life dukes) who ruled Venice for over 1,000 years. We opt for the Secret Itineraries guided tour, which I called the "Dick Cheney/Gitmo Tour" because it takes us to the secret, undisclosed locations in the Palace where the dukes had private chambers behind hidden passageways. Also to the torture chambers and the prison cells, including the one Casanova escaped from, as well as the staircase down which he ran to his freedom.

We also saw the rooms of Venetian and plundered armor and weaponry of the area, which we were not permitted to photograph (so I just had to; see photo). 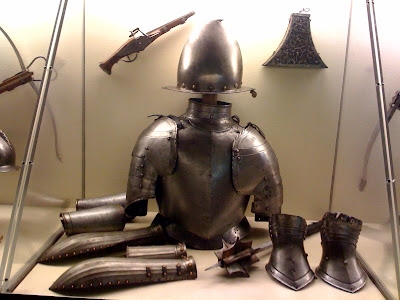 At the conclusion of the tour, I made a crack to the guide comparing the doges to Bush & Berlusconi today; she laughed and said there was too much corruption in the world now to fight it.

This being a crisp, clear day, a trip up the 318 ft. San Marco Bell Tower was a must. As soon as we exited the elevator at the top, the giant bells started clanging overhead. That, combined with the ferocious wind up there, with a wind chill factor that made it feel like freezing temps, and this turned into an endurance test. Still, the unlimited visibility seeing Venice from above was worth it.

Now it's lunchtime. But in search of what our guidebook called one of best pizzerias in Venice, our following directions that didn't quite make sense, and we were unable to locate it. One local shopkeep told us flatly: It does not exist.

So we settle for a nearby Crazy Bar, a chain of small café/bar/restaurants, to get our pizza fix. They have Moretti Rossa, the brewery's decent deep red, malty lager, on tap (alla spina), so we
order 2 and a funghi pizze (mushroom pizza) to share. 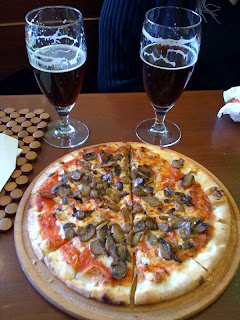 I also find 2 bottled beers I had not seen/tasted before, so we order them for dessert: San Souci, a 5.6% Moretti export lager brewed in Milan is mildly malty with a dry finish. It's made with an ingredient called granturco (I'll have to get back to you on what that is) [Ed: Its is corn]. Also, Castello Birra Premium Friulana from the Castello Brewery in San Giorgio di Nogaro; 5%, sweet, boring and made with maze adjunct. 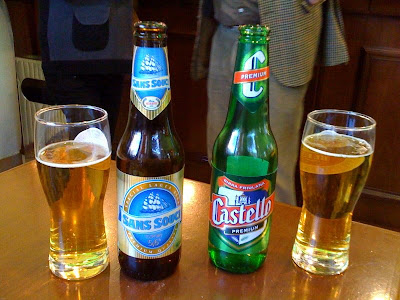 Birra-fortifed, we catch the vaporetto, the overpriced water bus that takes folks to locations in Venice inconvenient to walk to, for a chilly ride at dusk to the Collezione Peggy Gugenheim, the late art patron's home/museum that houses some of the world's best examples of Cubism, Surrealism and Abstract Experssion, including work of ontime hubby Max Ernst. We get 45 minutes to peruse, which turns out to be enough time.

After some modern art in an ancient city, we take the long walk back to the hotel and pick up a couple slices to go from a pizza á taglio to have with our last craft beer brought from Milan, Biriffico Scarempola's IPA (Italian Pale Ale), a beer made with grapefruit but not all that citrusy. 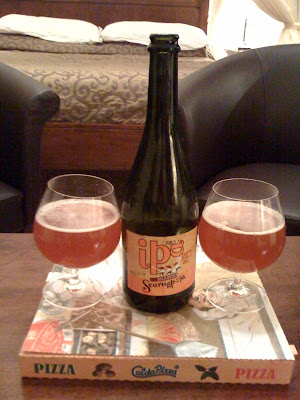 Visit "to the secret, undisclosed locations" is really cool and of fun. A good local guide can add great value, isn't it? Nice photos of beer and pizza. Seems yummy. :)