As I sat down to write this, I realized I was too busy drinking beer to take pictures, so you'll have to mostly make do with mere words.

My brother Dennis was arriving in Nürnberg this morning and my parents were going to meet him at the airport. Luis, Jim, Jack and I decided to join them on the train ride and walk around the city while they took the subway to the airport. Luis also wanted to visit the Henckels store on Königstrasse to check out there selection of "seconds."

On the way we passed the Barfüsser brewpub, so of course we had to investigate their beer selection. As is usual for these type of "modern" German brewpubs, they had two beers: Blonde and Dunkel. They both were good (which hasn't always been the case at Barfüsser, sadly) but the unfiltered Blonde was the clear favorite at the table. 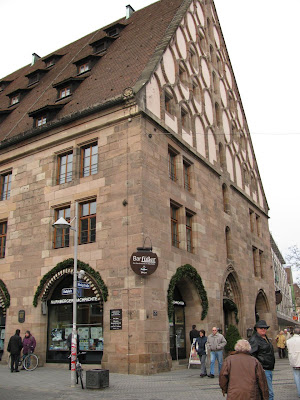 Across the street from Barfüsser is the Hotel Deutscher Kaiser. This normally would not be of interest to beer tourists, but the hotel resturant is Andechs -- Das Wirtshaus, a tap room for the Andechs Monastary brewery south of Munich. When the contingent from airport arrived, we wandered over to the restaurant.


They have five beers on draft: 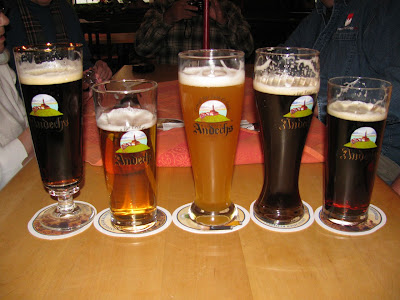 The two favorites were the Spezial Hell and Double Bock. The double bock is probably my favorite example of the style: very malty and smooth and the alcohol well hidden. The Spezial Hell was light and refreshing with just a hint of malt to make it interesting. Of the wheat beers, I liked the dunkelweizen better, but the consenus was mixed -- some liked the pale weizenbier better. Both were fine examples of the style, The dunkel is a very fine example of the style as well -- it clearly shares some hertiage with the double bock.

After that, it was back to Bamberg and a short nap to sleep off all the bock beer :)

I had made dinner reservations at Schlenkerla for 7pm and those staying at Spezial and Fässla gathered at 6pm for an appetizer beer. By then it had started to rain so it was hard to leave the cozy confines of Spezial, but we were 8 people crowded around a table for maybe 4 or 5 so it was into the night for the walk to Schlenkerla.

Our reservation was for 11 people and it was a tight squeeze, but Schlenkerla was packed and we were lucky for any place. It turns out the small room to the left as you enter is booked every Thursday night for a group and there was a tour bus group taking up the bulk of the large back room. So it was good I had made a reservation.

After dinner, and quite a few beers (regular, bock and the Schlenkerla Weizenbier) most decided to call it a night but Tom, Jim and I had room for one more beer, so we walked down the Sandstrasse to Der Pelikan where they had bottles of the Weizenbock from Brauerei Drei Kronen in Schlesslitz. This beer had recently won the Silver Medal for Consumers Favorite Beer at the European Beer Star competition in Nürnberg. 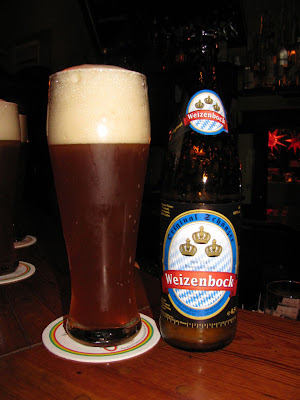 Drei Kronen, Schesslitz Weizenbock
Unlike the Hummel Weizenbock we tried earlier in the week at Cafe Abseits, this Weizenbock tasted like a bock -- a bit fuller in the finish, malty and clearly not for consumption on a hot summer day. It was very good and one of the better wheat beers I've had recently. It had the right balance of flavors from the wheat yeast, some warming alcohol and a rich finish to fill you up. A nice close of a long day :)