Xmas Eve in Venezia is overcast and chilly, but at least the fog has lifted. Off to do some obligatory tourist stuff, like visiting Basilica San Marco in the piazza of the same name. Things smell a bit moldy, and funky as this was undoubtedly flooded in the recent deluge. And here I thought it was the rot of centuries of oppressive religiosity...

Prayers for peace next to booty plunders from the Crusades. Ya gotta love it. 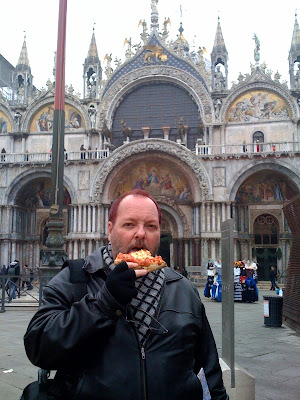 It's getting time for our Xmas Eve dinner. Our hotel recommended Trattoria della' Madonna in the Rialto district. Danise guides us thru the dark and winding passageways to a darker alley where the trattoria is located. Only it isn't open. So we settle for (heated) canalside dining at Ristorante Florida.

With draft Peroni the only beer available, I seriously consider ordering wine. But since we'll have beer when we return to the hotel, we choose the hop over the grape. Bad choice. It only makes us colder and doesn't go as well with the prawns and pasta we ordered. 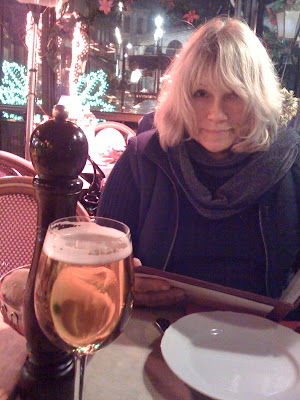 After a chilly walk back to the room, we treat ourselves to one of the Italian craft beers we bought in Milan: Birrificio 32's Oppale, a grapy, fruity pale ale at 5.7%. Tasty and refreshing as we sip it bundled up and sitting on our terrace, the beer, along with the impending jetlag, does us both in.

Plans for walking over to St. Mark's for midnight mass are abandoned. Instead, visions of candi-sugared beers dance in our heads as we turn in for the night.
Posted by The Mad Brewer at 11:26 AM